Climbing up another 2 before I fall over the hill

"Oh no, he's back in the Cairngorms!" I hear you all cry out. "I hope he likes these ones and doesn't start a controversy again!!!!!"

Well since that controversy I've had to take some countermeasures to ensure I get past the hoards baying for blood. I've grown what could be described as a beard (by teenager standards

), I've changed my car (it's colour is listed as stealth grey

) and I can still outrun Big Tommo, who foolishly agreed to accompany me again as cannon fodder. So off we went to wander around the Cairngorms, and my final two munros before I turned 40.

The countermeasures began to fall apart before we'd even left. The car decided it doesn't enjoy my exuberant driving style (or it's built by Ford - Fix Or Repair Daily

) so I had to borrow the wife's, which is not so stealthy silver

I thought I knew where I was going, I kind of did, but got lost on the back roads and ended up the wrong side of the River Feshie so had to backtrack and get down the correct road. Since lockdown eased, we've been selecting the lesser visited Munros to avoid the crowds and to make sure we can get parked without causing the sort of issues that have been very well publicised. This detour delayed us by half an hour but we still manged to get parked in the decent car park just before Auchlean Farm. It was a cracking day, cold but the sky was totally clear.

Really easy to find the start of this walk, just follow the signs. Just through the gate the decent path turns off to the right and a much more worn one goes straight ahead, signed to Carn Ban Mor. You could do this route either way, depends if you want the long walk in or the long walk out. We were considering adding Monadh Mor and Beinn Bhrotain so had decided to head straight to the crossroads of the paths on the plateau, head for Sgor Gaoith first and figure it out from there, so followed the path for Carn Ban Mor. This takes you up through what I think is the most spectacular feature of the Cairngorms, the beautiful pine forests with their carpet of purple heather. The path was very good, well maintained, easy to follow and kept a pretty steady gradient as it made it's way towards the plateau. Soon we were out the forest and into the higher altitude scrubland. Absolutely no wind here and the sun was strong so we began to heat up quickly. Views were opening up to the west. View east, the scar of the path can be clearly seen in the right of the photo

Took about an hour and a half to get to the crossroads of the paths. Simple job of turning left here and following the wide trail direct to the summit of Sgor Gaoith. In front of us was the back of the Cairn Toul - Braeriach traverse which has been on my to do list for many years. It looked massive, and, weirdly, a bit Egyptian, just the way the two most prominent peaks had been formed. You could easily come up here with a tent, some supplies and spend a few days wandering about claiming many Munros. We made our way to Sgor Gaoith which looked like a squint bit of Toblerone sticking out from the relatively flat plateau. There were more people on this small bit of the Cairngorms than Lee and I have seen in many hill walking trips, as well as a good few mountain bikers, although the ones we saw seemed to be only on their bikes for the downhill bits, but credit to them for shoving a bike all the way up here! The summit was gained with no issues, a flat slightly sloped slab with a small scattering of stones rather than a cairn. The views from it were amazing. Take too many steps to the east and it was a long way down and a big splash into Loch Eanaich. 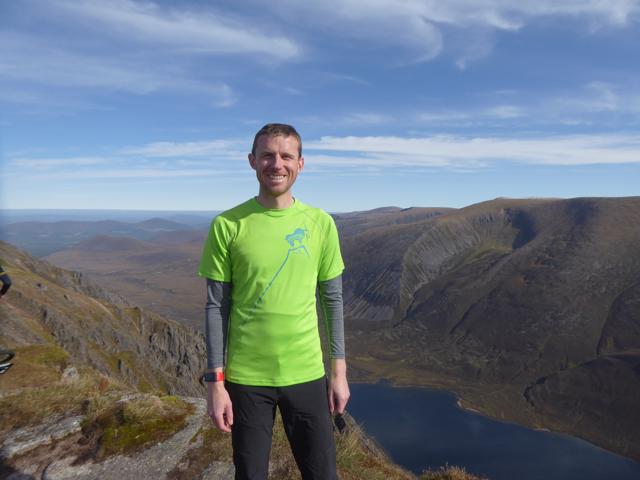 We'd made good time to get here and now discussed if this was going to be a 2 or 4 munro trip. The problem with glorious days like this is you can see everything, and nothing seems that far away. I'd done some route planning the night before and, from the crossroads to Beinn Bhrotain and back was approximately 10 miles. Lee and I can manage 20min miles over good terrain so that was 3hrs 20mins without a break. Definately achieveable in the summer with long daylight hours but the sun was due to set at 7pm and, worse still, I was expected to be at the family Zoom chat at 8pm and I didn't think my over used excuse of "Well, that took longer than expected" would fly this time.

We made our way back to the crossroads, meeting more mountain bikers along the way, and, once there, discussed our options. The other two were tempting, even just going to Monadh Mor, but I knew, as did Lee, that once we were there we were not just going to leave Beinn Bhrotain for another day.

Another consultation with the map and some time calculations and, for once, we made the sensible decision and left the other 2 for another day. We must be getting old and sensible, a few years ago and we'd be off marching towards them!

We carried on south towards Mullach Clach a'Bhlair and found an old stone shelter to have some lunch in. I sat just looking around taking in the scenery and enjoying the fact that I was somewhere else other than Bonnybridge. Lunch with a view

Once fuelled we set off to Mullach Clach a'Bhlair. Our plan was always to follow the track marked on the map that takes you towards the edge of Coire Garbhlach. Not much of a track at first and a large peat bog to negotiate / hop across if your legs are long enough! The trail becomes more distinct after the peat bog, and we saw a landrover track further to the east. A word of advice, don't plan this route using the land rover track, you'll miss all the best views. The track goes too far east of the Coire and round the wrong side of a minor summit marked 953m on the map for you to get a view of the stunning Coire Garbhlach. 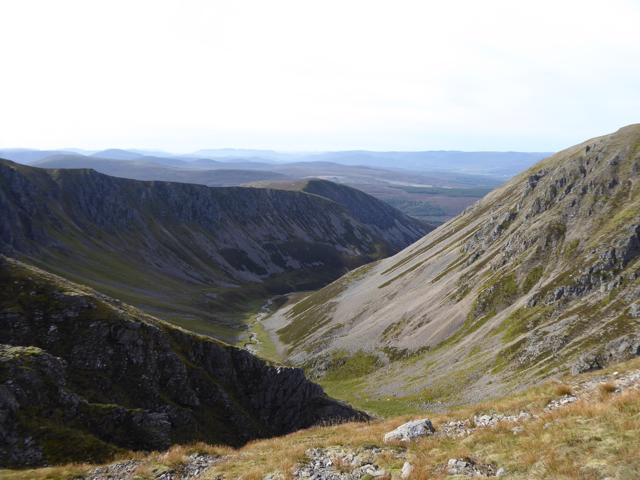 Eventually the trail meets the landrover track and we followed this to the summit of Mullach Clach a'Bhlair, which (ooooooo here comes the controversy........) is not a very impressive Munro. Views to the west weren't bad though and the weather was making the far away hills appear in different shades of blue grey. Very hard to capture on camera, pics don't do it justice. Now time for the long walk out down the land rover track. To be honest, I'd have a go at bringing my car up this. I've been along worse driveways to cottages I've hired for holidays. If I'd known the exit was this good I might've just went for the 4 as navigating this in the dusk would've been straighforward. There is a short cut however......... as the track curves to go round Meall nan Sleac, a trail leads to the summit and Lee had GPS that showed someone had went up and over this and cut kilometers off the walk. We've both been here before, considering a shortcut, taking it, then ending up cursing that decision. I wasn't up for it, Lee left the decison to me and I said we're sticking to the easy track. I'm getting far too sensible nowadays

To be honest we both agreed it was the right decision as, once we'd dropped down to Glen Feshie, we had a superb walk out along very good trails through more beautiful Cairngorm forests. We spent most of the time trying to spot any Red Squirrels, without success. A word of warning, we noticed that the River Feshie was no where near filling the river bed it has carved for itself, and came to a section of the path which had been completely washed away. This required a steep clamber down, a good bit of stone hopping to cross and a steep climb back up. I'd go as far as to say you'd have no chance getting across if this was in spate. The river has carved this cliff face. Several overhangs and it's amazing it stays in place.

Another smaller river crossing had to be made before we were eventually back at the car.

So, did I enjoy being back in the Cairngorms? Yes, I did. Very much so. I loved the drama of the views round Sgor Gaoith, the great weather, the forests and rivers of Glen Feshie, being back out hiking with Lee and being away from my usual and all too familiar surroundings, thanks to the restrictions of lockdown. The Beinns from Linn of Dee didn't do it for me, I gave my opinion on them and it generated, erm, discussion

I've never disliked the Cairngorms as a whole, I've been back twice in between that report and this one with Manda to hike up Bynack More and Carn a'Mhaim (both in pretty snowy conditions) and had a great time. Guess you just find things you enjoy, and sometimes you don't. Any complaints, direct them to Lee, he made me write this.


I've got 99 problems but Beinn Sgritheall ain't one

Trailblazing a route from Cluanie to Loch Quoich munros

3 boring Beinns from Linn of Dee