beinn_mhanach.gpx Open full screen  NB: Walkhighlands is not responsible for the accuracy of gpx files in users posts

I've been looking at this one for years now, but always found a better alternative mountain - usually one I'd done before. This hill has a reputation as a grassy lump, with a long walk and river crossings on the usual route from Auch, never mind the awkward A82-side parking there.

So, with a limited time to get out on this day, I decided to attempt a 'run' from Achaladair Farm to tick this one off the list. When I set off from the car the temperature read -3, but the weather promised to be sunny all day, so I would soon warm up. I used the route up the corrie to the bealach between Beinn Achaladair and Beinn an Dothaidh - a route I had descended years previously after doing the usual rout to Beinn Achaladair. I had heard of hydro works here in the years since and had hoped for the relentless squelch up the corrie to be better, but it seems the path is still the same as it was.

Battling to keep dry feet - and avoiding the worst of the early morning ice - it was nice to reach the bealach. From here the target hill cannot be seen, but I just contoured round and slightly down to the bealach with Beinn Mhanach and made my way up near the fence often used as a descent route. Again, the lower part of the hill is squelchy, but gets better higher up.

With clear skies, I spent a little while with the camera before returning via the same route. It is very much quicker to get back down the corrie through the squelch when one no longer cares about wet feet!

I posted this as I know other WH users were on the adjacent hills at the same time - perhaps they are somewhere in this photo : 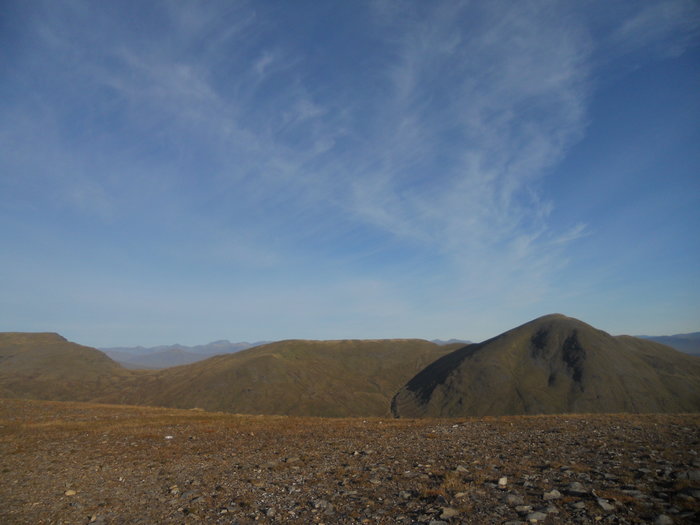