Five of us - two dads, a 16-yr old and two 15-yr olds - did the traverse over two fabulous West Highland days. Rum and its Cuillins provided the best of times, but as always, you get out what you put in, and this traverse requires that you put in a lot.

We chose to do the route in a clockwise direction. Arriving at Kinloch at 2pm in glorious sunshine and stretching our legs out for the 2.5hr walk along the coastal path to Dibidil. The track is Jekyll and Hyde like, most of the time very easy to follow, with SNH doing some major restoration work turning it into a smooth pavement, and then abruptly it disappears into bog for 50m before reappearing. In the sun, with clear views to Eigg and then Muck, it was a treat further rewarded with the descent into Glen Dibidil as we passed the sea-arch (though hidden from view) with the bothy sitting comfortably in a sea of lush green. Walking the coastal path to Dibidil The bothy was allegedly closed due to Covid, and we had our tents with us - but the bothy book told another story, with a continuous list of recent visitors - and given that the lack of breeze and evening sun was bringing the locals out in clouds, the sanctuary of the bothy was a whole lot more appealing than tents. Two sets of bunks in either room allowed for plenty of space - and it was all ours this evening. The Dibidil River flows over a series of broad flat rocks as it wends its way to the sea, joining its salty end in a small waterfall and deep pool which was too inviting to pass up. The cascading flow balmily warm and a sauna-like contrast to the sea 5m beyond. 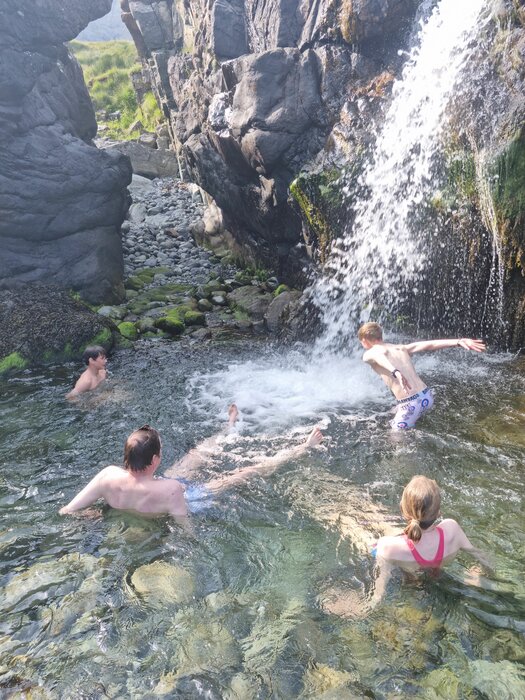 A brief sighting of a minke whale half-way to Eigg and then a pod of porpoises closer in, along with the shearwaters, guillemots and an inquisitive seal made this haven all the more magical.

Without having to pack the tents we were able to steal a few minutes more sleep the following morning, but were away by 8am. The sky had clouded over but it was still shirt-sleeve order. We followed the track on round the coast, rising gently up the flank of Sgurr nan Gillean, for about a km, before striking off to the left and up the slope more directly. This is extremely rough terrain. Tussocky, boggy and uneven. It was a relief to get to steeper slopes where the slabs begin and you could move across stretches of rock. As we ascended the promised views of Coll and Tiree started to obscure as some cloud came in and by 10am we were on the top in thick mist, and feeling quite chilly.

An easy ridge walk around the top of the Nameless Corrie takes you to Ainshval with minimal descent. The skies cleared and the rest of the day lay before us. It was only 11am and we had 8 hours left to get back to catch the ferry. We were feeling fit, despite the full packs, and the weather was clear and fresh - how were we going to fill the afternoon?

Ahh - Trollabhal. It appears in small print only on the 1:25000 map, and is 'just' the Graham, so we had largely overlooked it, but while small in height it is large in character and beautifully formed. It does add a considerable addition to the day too. This is a troll that needs to be noted. The bealach between Ainshval (781m) and Trollabhal (702m) lies at 510m, so there is the better part of 200m re-ascent after the knee-breaking 250m of descent. The scramble to the top is a delight, with the wonderful grippy gabbro offering its plentiful handholds - but that overnight pack was not making me float up. From Trollabhal you get an intimidating view of Askival (812m) and Hallival, looking precipitous and apparently routeless, but by this point it is all too tantalising to ignore and you are lured on to the next bealach. The lowest point other than the start and finish of the route, at 455m. Again that steep descent spares little quarter, and the knees and thighs were feeling the strain. Poles would be good, but they get in the way on the scrambles... and then a long slow plod (for me) the others seemed to have different batteries, up to the high point of the day. The troll and taken its toll, and this was a sapping ascent (perhaps I should have done more preparation than the walk between kitchen and home-office desk). The path was there after all, and no real challenges other than the incline, presented themselves. A super-yacht cruised into view between Muck and Eigg, and the idea of sitting on its deck being served a whisky sour - or whatever you drink on superyachts in the western isles - became very attractive. But the plutocrat on-board will not have had that cortisol fuelled surge gained on reaching the summit, and mountain water, a slice of cheddar and dried apricot tasted better than their langoustine salad without a doubt. By now it was 2pm and the lazy afternoon by the jetty was beginning to look less likely. Trollabhal and Askival had eaten up the midday hours greedily. Hallival (722m) lay just 1km to the north with only 120m of re-ascent to do, surely we'd be there in 40 minutes. The traverse in the clockwise direction reveals itself and its intricacies only slowly - and the pinnacles of the Askival north ridge needed careful unpicking. At times the ridge route is open and easy, but with a couple of mauvais pas. Those of us who took the lower route fared little better though, there are still some steep scrambles and the path is unclear - we wished we were more like the two splendid mountain goats looking as if they had arrived straight from a child's book, that we encountered half-way along.

By 3.15pm we were on Hallival, feeling a lot less fresh than we had a few hours earlier. But we had conquered all the summits and it was downhill all the way from here. But downhill was about as hard work for tired legs with full packs, as uphill, and the first 200m of descent felt as steep as any. Then it evened out to a moonscape like plateau to the bealach and a then another rough descent alongside the Allt Slugan a'Choilich before eventually reaching the well-built path at the dam a couple of clicks before the castle is reached.

In fact we were back at the jetty for 5pm. It had taken 9 hours from the bothy, which on reflection was not too bad. We (well, I) had not stopped very long along the route (my fellow travellers had waited a good while in places - and would have had a long afternoon in Kinloch if I had not held them back). The 2 hour wait in the evening sun while we awaited the ferry, drifted by, the pleasure of sitting down. The fish and chips on-board on the way back to Mallaig have never tasted better either. Small pleasures after big adventures.

The weather had been undoubtedly on our side, but you have to play the cards your dealt - and we got a great hand. This is an exceptional Scottish route. Demanding and rewarding in equal measure. Rum serves up a very appropriate balance of sugar and spice.
Click to mark this as a great report. Register or Login free to be able to rate and comment on reports (as well as access 1:25000 mapping).