No sheep, no cattle, no ticks - no farmer

I could add to the title - not my favourite hills and never again! But that’s too negative - on the upside, I had a fabulous day and completed two hills that were on my wish list.
These two had been our target on Friday 13th (May) - maybe we should have taken more note of the date - but after parking safely (on wide verge, not blocking visibility, and then setting off up the hill, avoiding a lower field with sheep and lambs), we were accosted by the farmer. He had spotted us from the farm, and, on his trials bike, intercepted us part way up the slope. Quite aggressively he told us to get off the hill (sheep still lambing higher up he said). We immediately retraced our steps and went off to walk on Roan Fell instead. 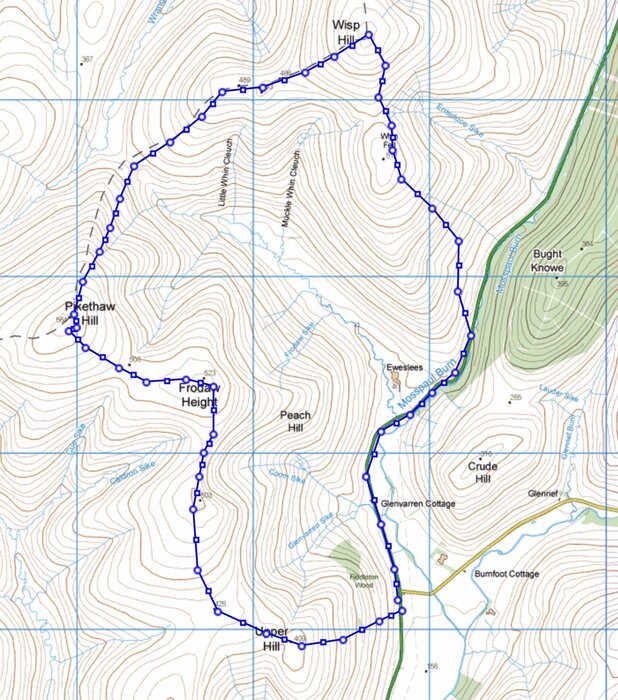 Approximate route - does not show all my zig zags on the steeper slopes!!

So today I parked, where he had recommended, in the lay-by near Fiddleton, just south of the road signposted for Hermitage Castle. From there, it was a steep pull up to Upper Hill, but at least the bracken was still low so less chance (fingers crossed) of ticks hitching a ride and meal. Followed the line of wire fence, crossed at this gate then up the fence line on the left

Following the fence line, my route led over Dan’s Hags, Frodaw Height and so to Pikethaw Cairn. Happy that the slope has eased - but not so easy underfoot!

I was horribly slow over this section (the clue is in the word ‘Hags”) with tussocks, some bog and old heather. Cotton grass dancing in the breeze and more Cloudberry in flower than I have seen for a long time. Not many birds about - skylarks, meadow pipits, a buzzard and a pair of crows. No sheep. 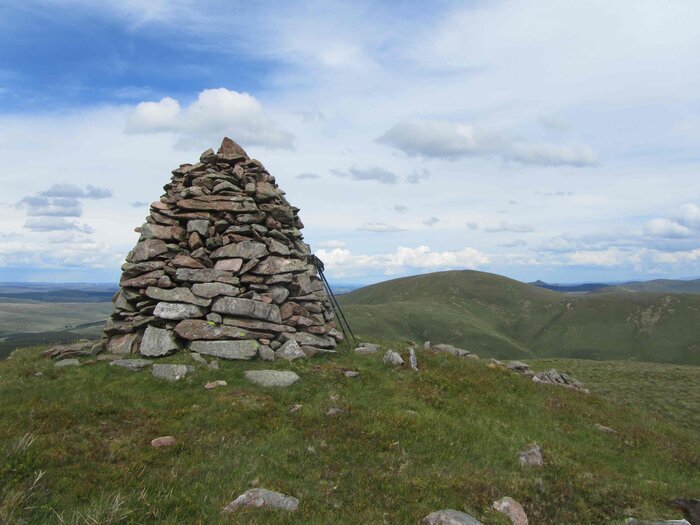 Nice cairn on Pikethaw - have to take a photo. Views a bit hazy.

The drop down to Ewes Doors seemed endless, then it was up to Ewenshope Fell and Wisp Hill, the going underfoot much kinder now. View were good - I was amazed that Arthur’s Seat was visible for much of the way, as well as the Eildons and then south to the Solway and Lake District. First time I’ve seen a noice like this - maybe trig points aren’t redundant after all?

Heading south from Wisp Hill, I descended over Whin Fell and then steeply down, aiming for a diagonal route to hit the track at the line of pylons. Lots of zig zags down the steeper slopes! Looking south down the Ewes Water and A7. Centre of the photo, the hillside with a few trees - my line of ascent up the slope to the right. Short but brutal.

I followed this for a short way before, gathering all my wits, finally walking beside the A7. Maybe because it was a holiday weekend, or maybe as this was now later in the afternoon, the road was thankfully quiet. I did have just over a kilometre back to the car, but it was with good visibility and a verge (unlike stretches of the A7 just to the north). That said, this is not a route I would recommend.
Sad really, our visit on Friday 13th was the first time in over 50 years of being in the hills that I have ever experienced such aggression. Avoiding the farmer undoubtedly influenced my route today - although I kept a good distance from sheep (and the farm), initially the noise of a motorbike made me jump - until I realised the sound was coming up from the A7.
Maybe the best way to do these two hills from the east would be with two cars - one parked near Mosspaul and the other at Fiddleton? I’m just happy to have walked there, and won’t be going back.
Click to mark this as a great report. Register or Login free to be able to rate and comment on reports (as well as access 1:25000 mapping).

Spring in my step

The 'Newtons' - best traverse of the Ochils

First balloons of the year