To be honest I almost didn’t venture out – what a waste that would have been! I was supposed to be heading to Ben Vrackie with a friend but he rang early to say that he’d been unwell during the night and couldn’t make it. The weather didn’t look that great so I got on with a few jobs around home until, looking out of the window, I noticed the mist clearing and a lovely pinkish glow appearing on the hills. Hmm, quick change of plans. Late away on the shortest day – perfect for that pair of Grahams above Amulree I’ve kept meaning to climb. I thought I might be the first to put in a walk report for them but I see that Graeme got there before me

A drive up through picture postcard scenery had me parked at the (sadly closed) hotel by 10:30. A couple of minutes enjoying the view from the bridge then it was off south along the road until the track to Girron headed off left. The sound of barking greeted me here and, sure enough, 5 frisky locals bounced and bounded in my direction rolling and frolicking in the snow. What is it with me and dogs

At least they were good natured if rather energetic but they were clearly intent on joining me. Eventually the shepherd appeared and called them back – 2 still seemed to think walkies with me seemed more fun so I had to head back with them and hand them over to their rightful owner I followed the landrover track up to about 400m then followed some hare tracks which wandered up the slopes to Creag Ghorm. I’m told that the two paw prints in line at the rear are the front paws, the ones side by side at the front are the hind legs.
At one point on the track I found a spot where it appeared a bird had run round in circles a couple of times then collapsed in the snow. Perhaps he’d found the remains of some of the illicit whisky which used to be distilled around here. A friend of mine has worked for the local estate on and off for many years. He told me of a day over 30 years ago when they were demolishing an old cottage. Built into the wall behind the fireplace they found a still!

Hoar frost covered everything turning each blade of grass into ornaments of a wonderful delicacy. As I gained height the view started to open out, and very impressive it was too. On these slopes of tussock and powder snow I was moving slowly enough to fully appreciate it Once past Creag Ghorm a couple of downs and ups brought me to the trig point on Meall nan Caorach. From here it was a case of following the fence down and back up through powder snow and deep heather to Meall Reamhar. By the time I reached the summit the storm clouds which had been visible in the west all day seemed to be gradually moving my way and the sun was hidden behind them. There was still a fine view to the Lomonds of Fife however. 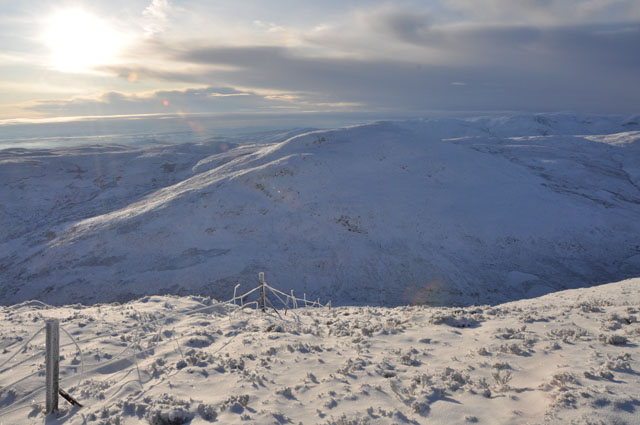 I headed back down to the col and then wandered along the landrover track.
For a while I followed a set of prints which I suspected to be a fox. Evenly spaced and almost in a straight line. Can anyone confirm that? The dogs of Girron were heard but not seen so I had time for a photo looking back to my hills. The storm clouds had receded again and the final stretch down to Amulree was a pleasant end to the day, a normally drab landscape improved no end by the snow. The moon was prominent by the time I was back at the car whose thermometer hit minus 12 on the drive back. Maybe we will get a real winter this year Life in the Freezer - Glen Dessarry episode one (Carn Mor)

To the middle of nowhere and beyond - the Tarf Hotel trip

In the Cairngorm Foothills