After having spent a week on Mull, it was time to get back to the mainland.

In order to acclimatise, I decided to spend the night on Seil of the Slate Islands. Albeit being joined to the mainland by the famous Bridge over the Atlantic, it still very much has an island feel to it. A bit more than a half hour from Oban, this beautiful part of the world feels quite remote. From Ellenabeich, the main village on Seil, you can catch the "ferry" to Easdale, the smallest permanently inhabited Scottish island. No way we were going to miss that. In order to get over there (if you don't happen to have your own boat), you can call the ferry by sounding a horn from the shelter on the pier. Here's the timetable. 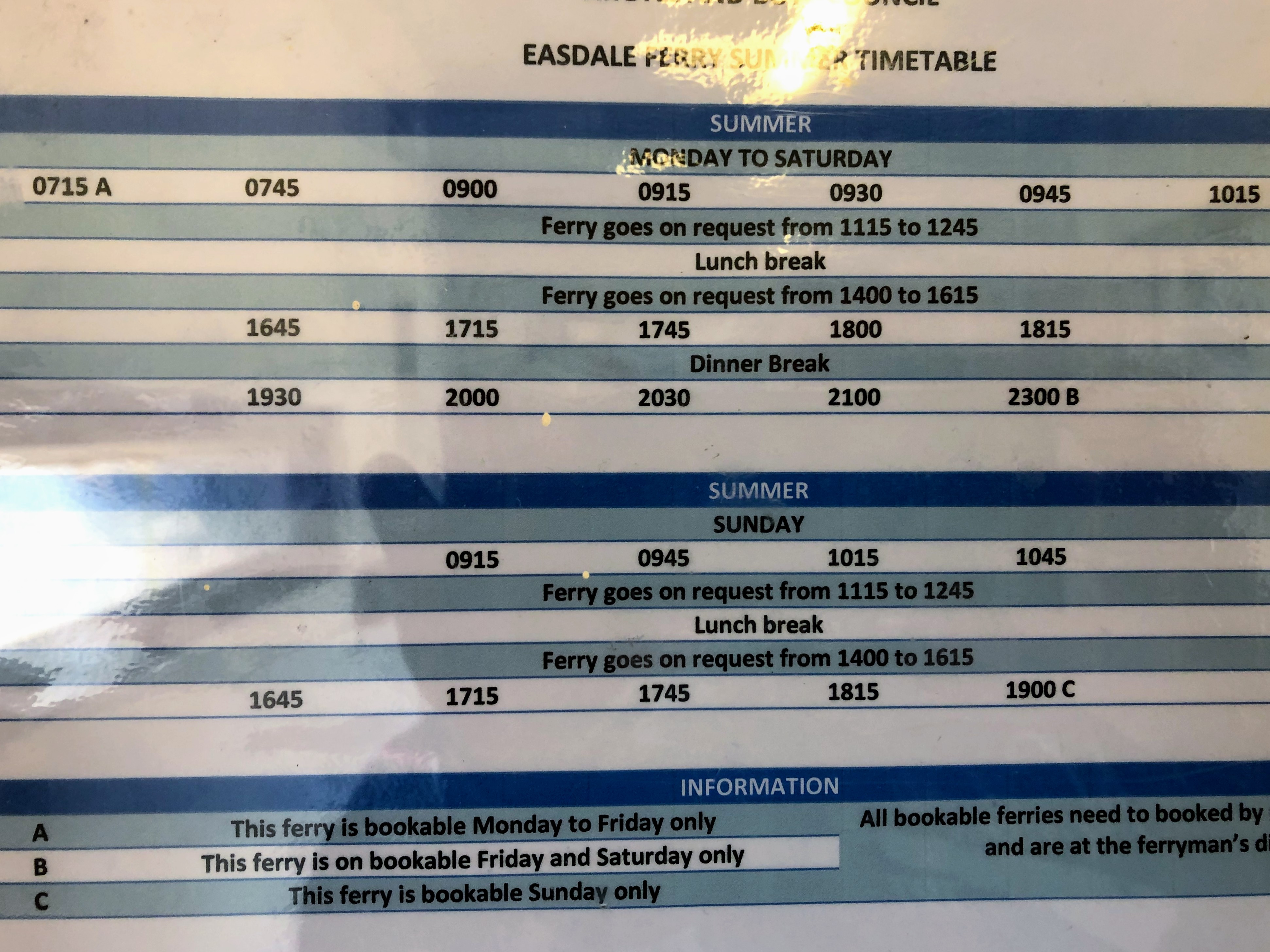 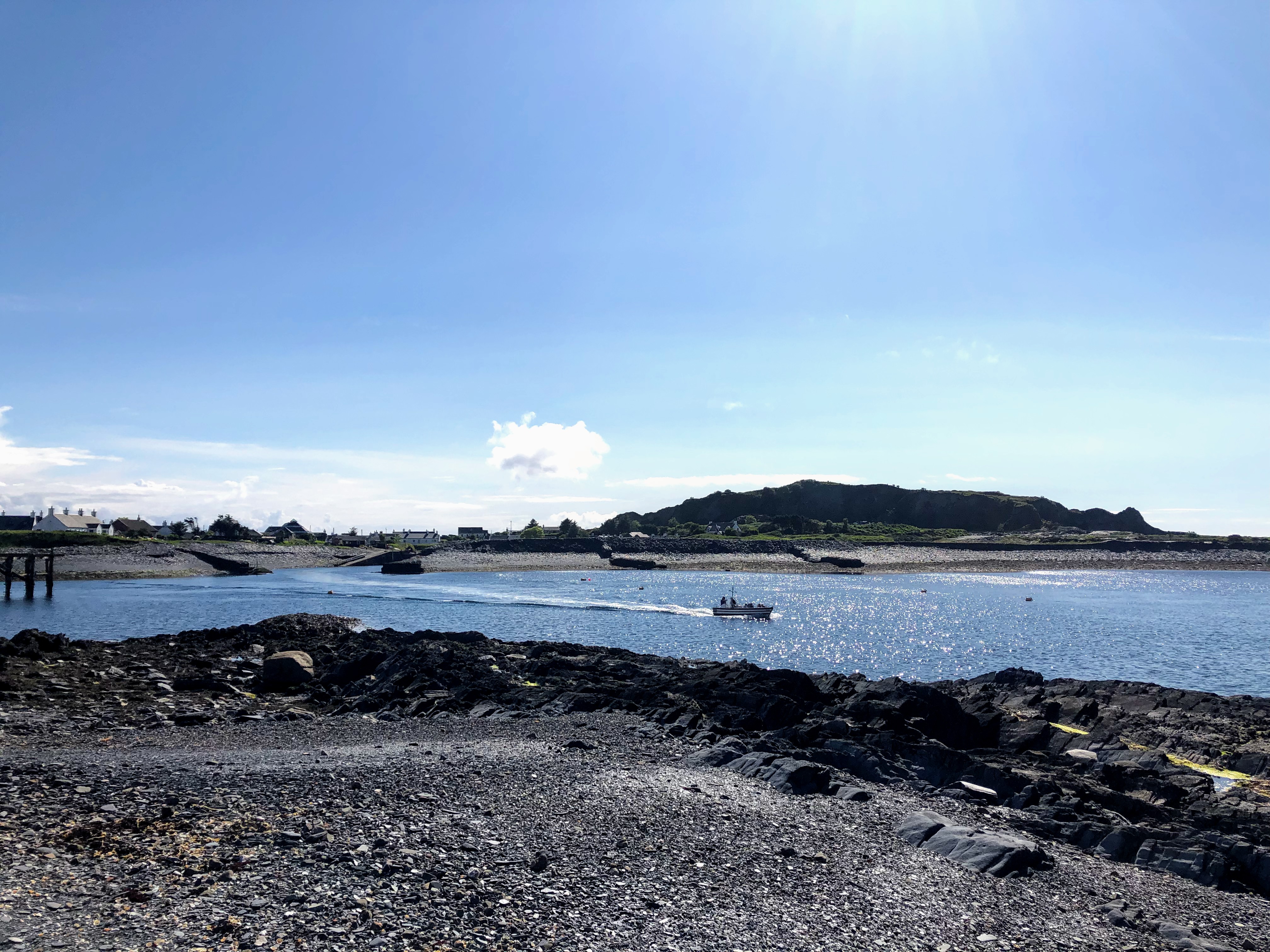 In the harbor of Easdale, looking down on the ferry and back to Ellenabeich/Seil. 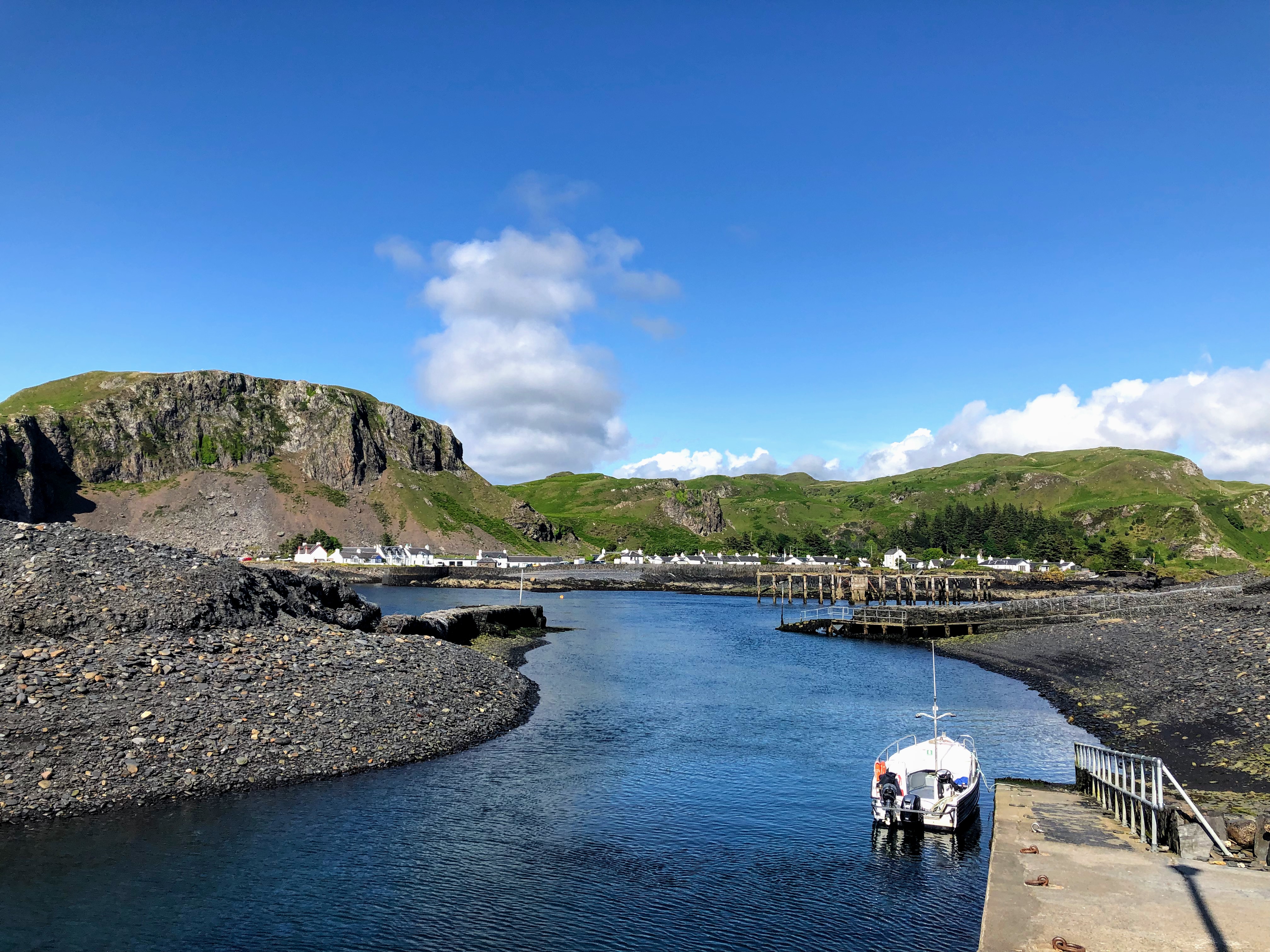 The ferry terminal / shelter on Easdale. 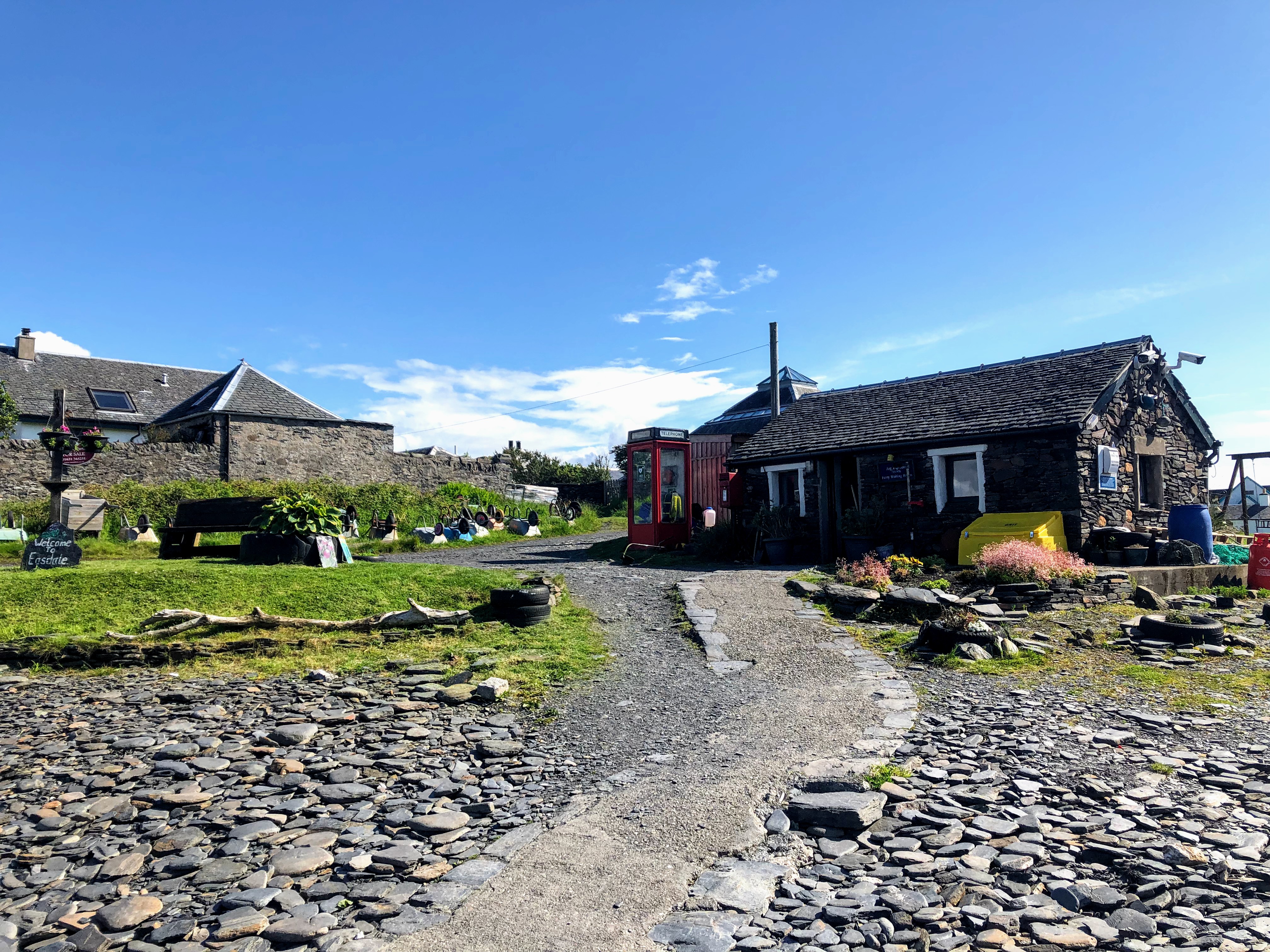 Easdale has around 60 inhabitants and a decent amount of facilities, including a community center and a pub, both of which were closed given it was a Sunday. Anyway, we only had one and a half hour to do the island circuit as we needed to catch the last ferry back to Seil so no time for idling. We crossed the village and followed a sign post indicating "High Hill" and soon we were at the back of the island consisting mainly of disused slate quarries.

Looking over a flooded slate quarry towards the island of Insh, with Mull in the background. 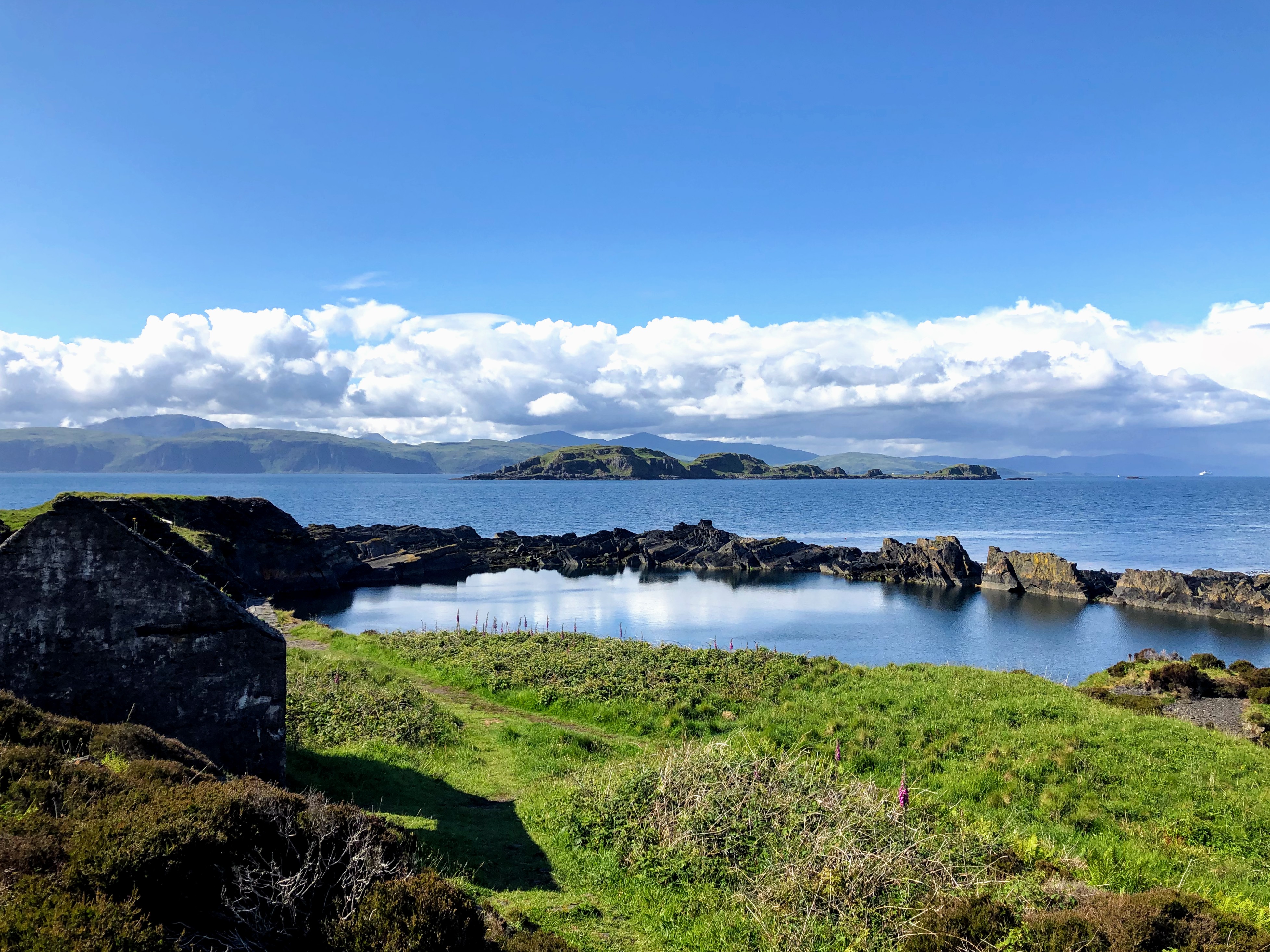 The path winding its way between two disused and flooded slate quarries. 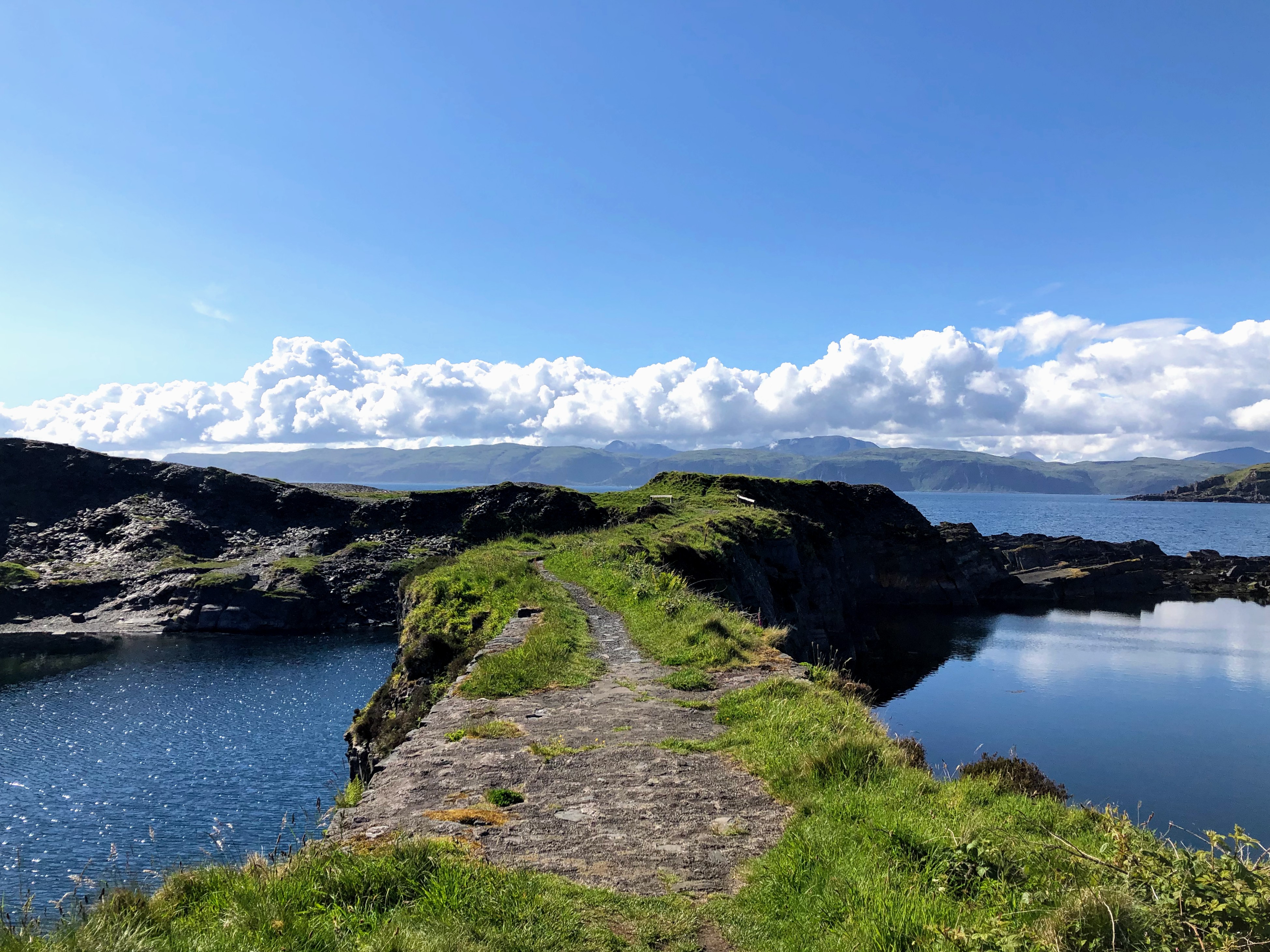 It's not called the slate islands for nothing. Garvellachs in the distance. 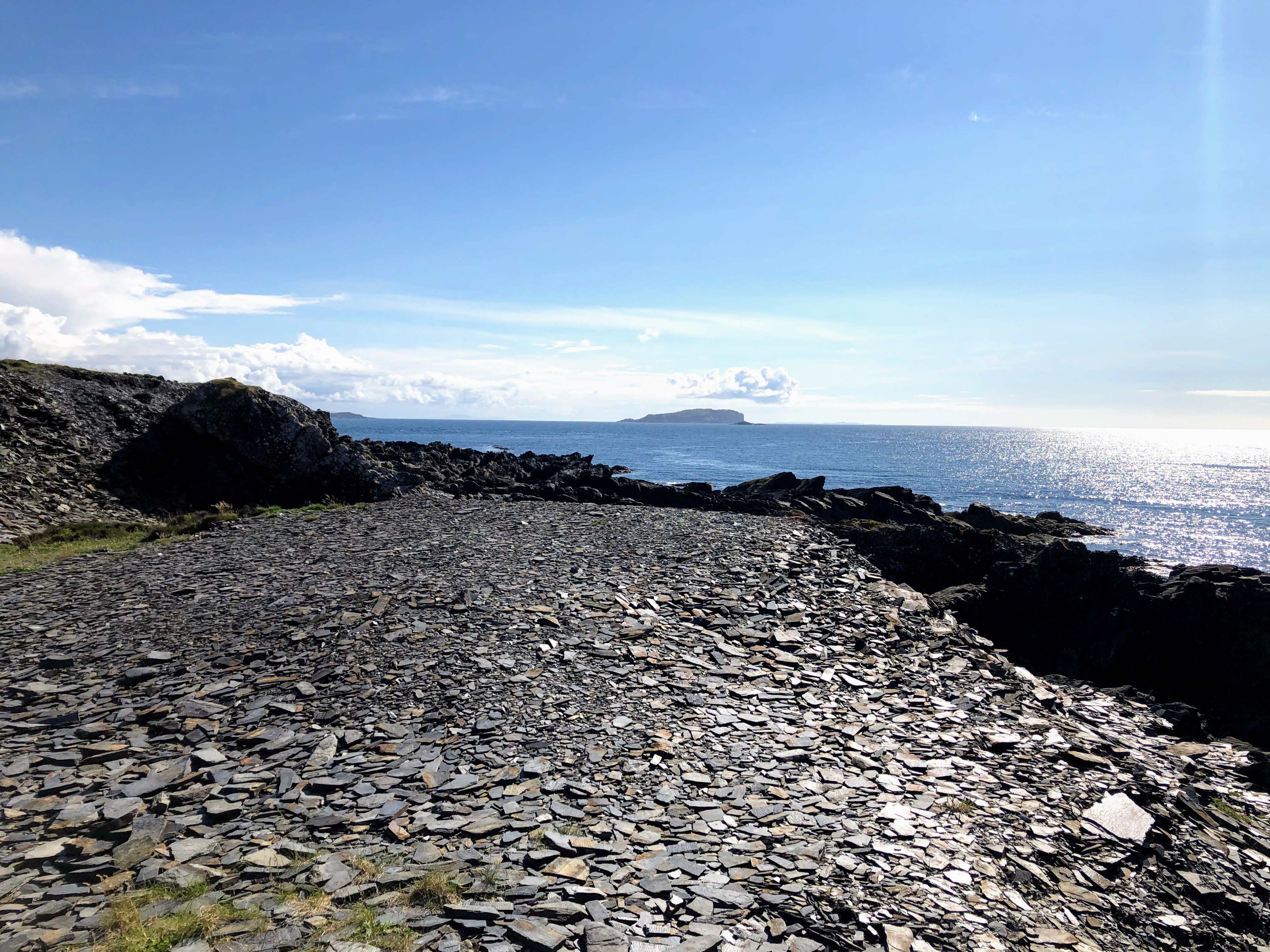 On the back of the island, more flooded slate quarries with Scarba, Belnahua, Lunga and the Garvellachs on the horizon. 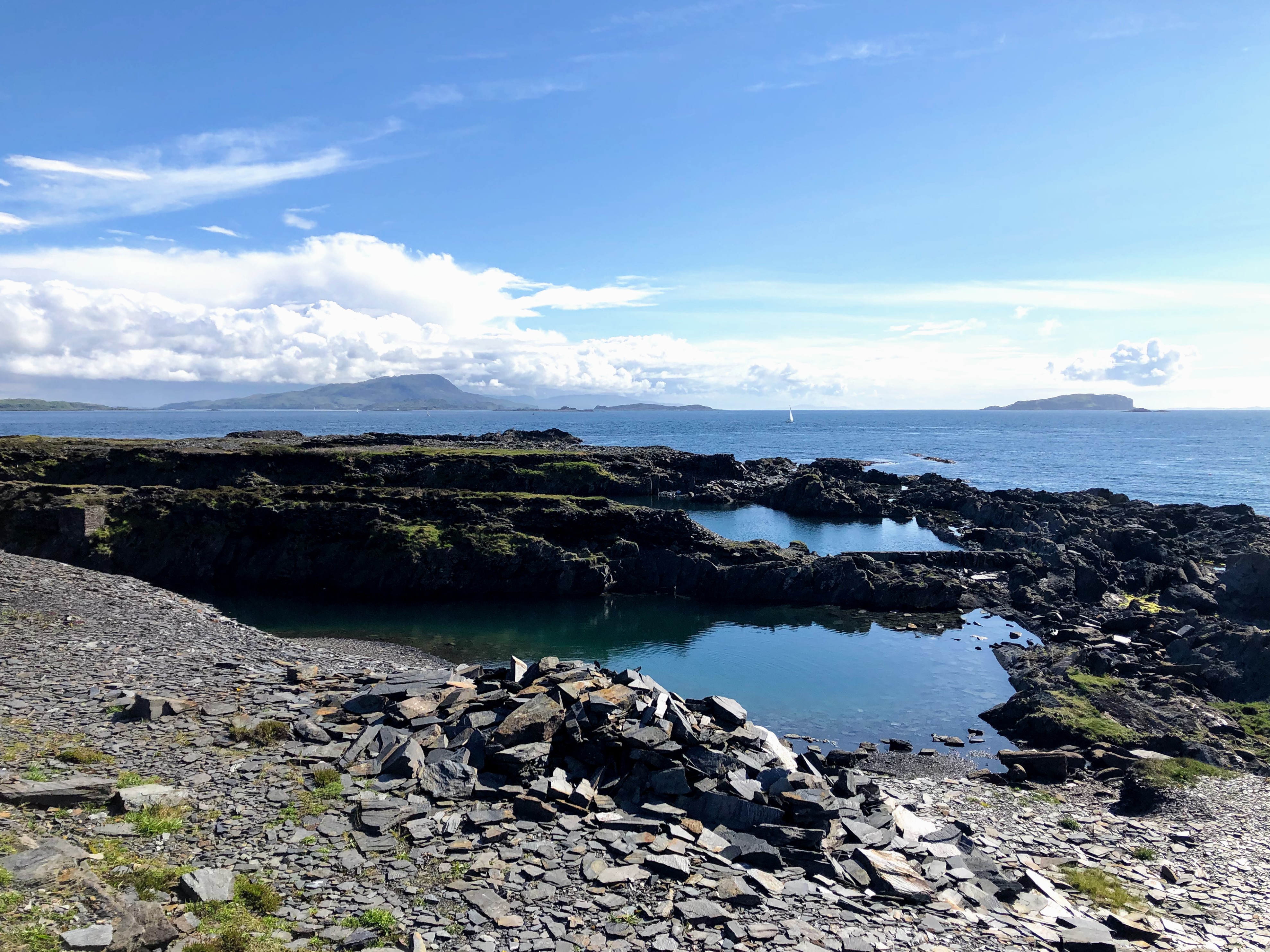 The slate quarries are nowadays used as swimming pools (not by me though). Yes, these are the heads of two blokes having a swim... 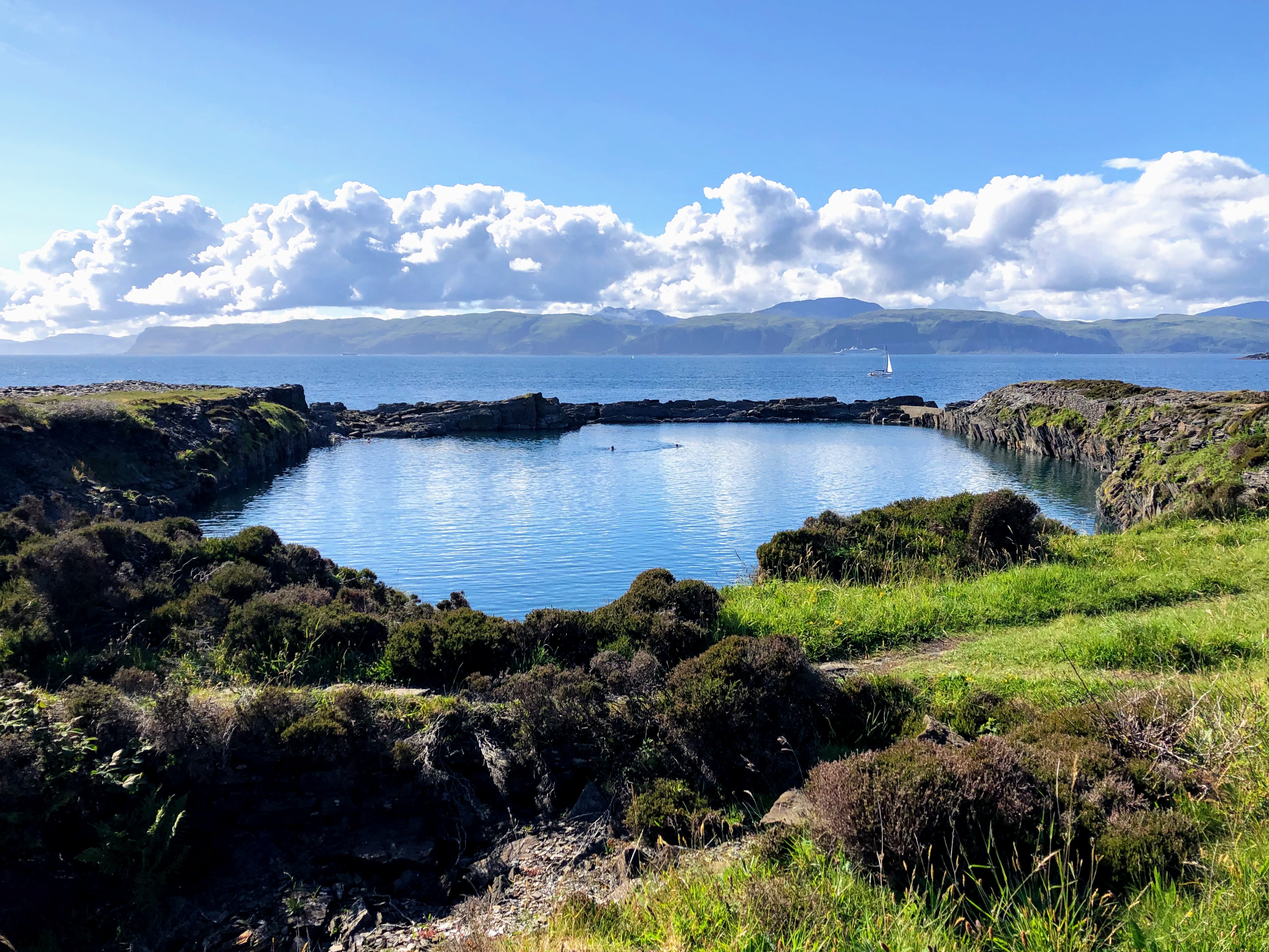 At the back of the island, the only path to the High Hill starts. It's a good idea to wear long trousers as it's a bit overgrown and there might be ticks. 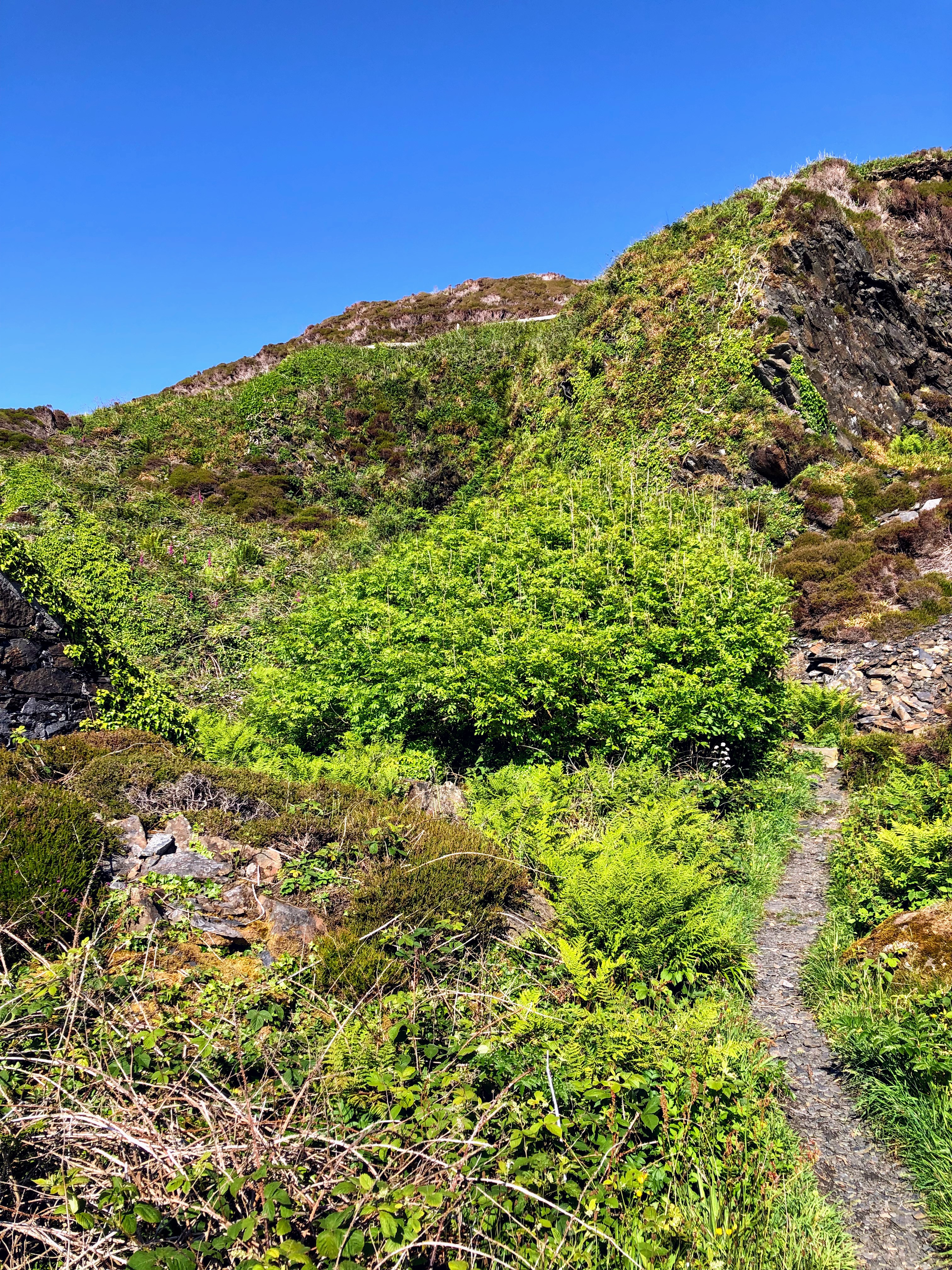 Looking back over the quarries from the way up. 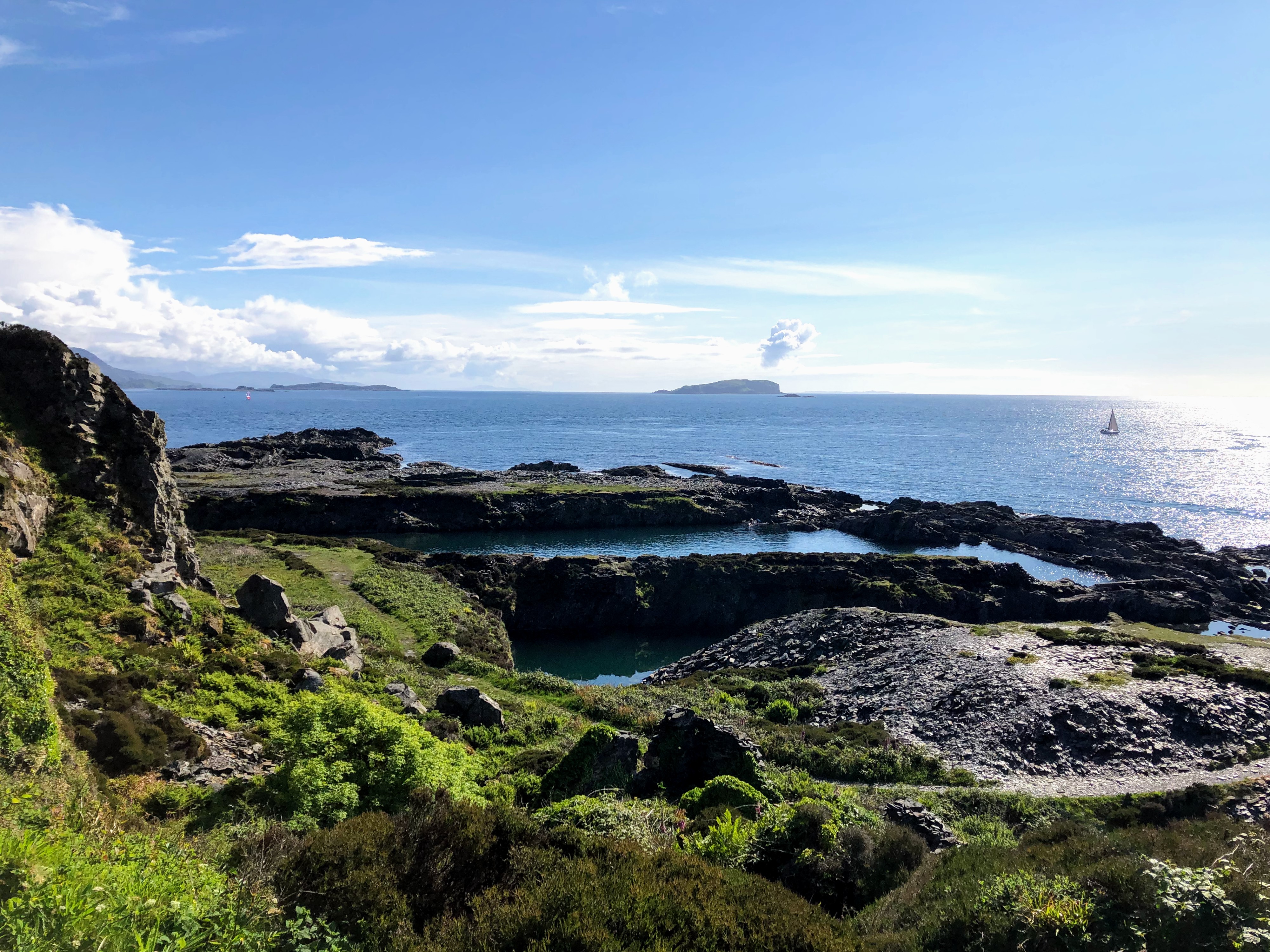 We disturbed a grouse which flew away not in the most elegant of ways. 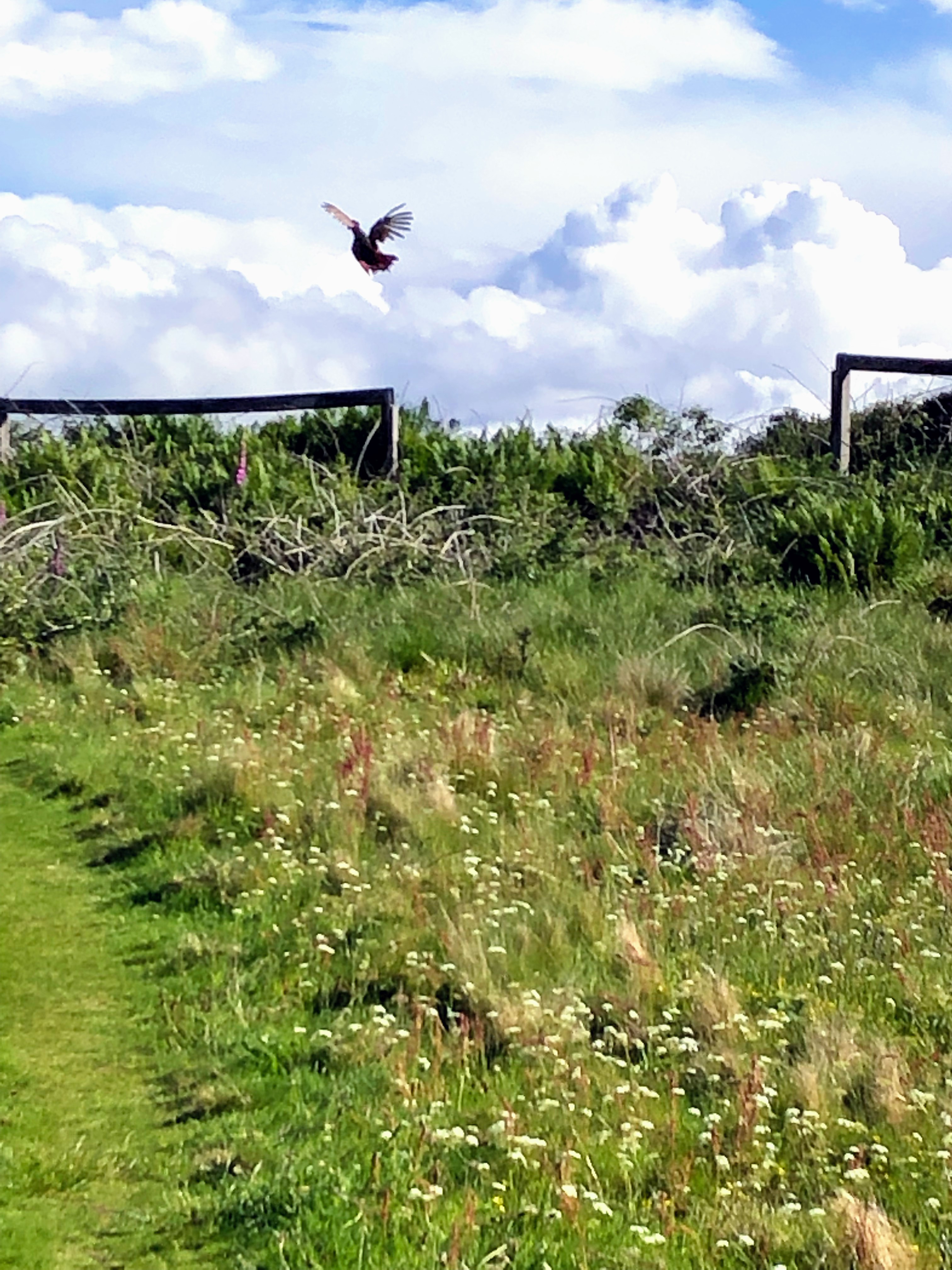 It's really worth to climb the hill. At only 38 meters above sea level you have 360° of absolutely stunning views.

Looking back down on Easdale and over to Ellenabeich/Seil (with its own fair share of disused flooded quarries). 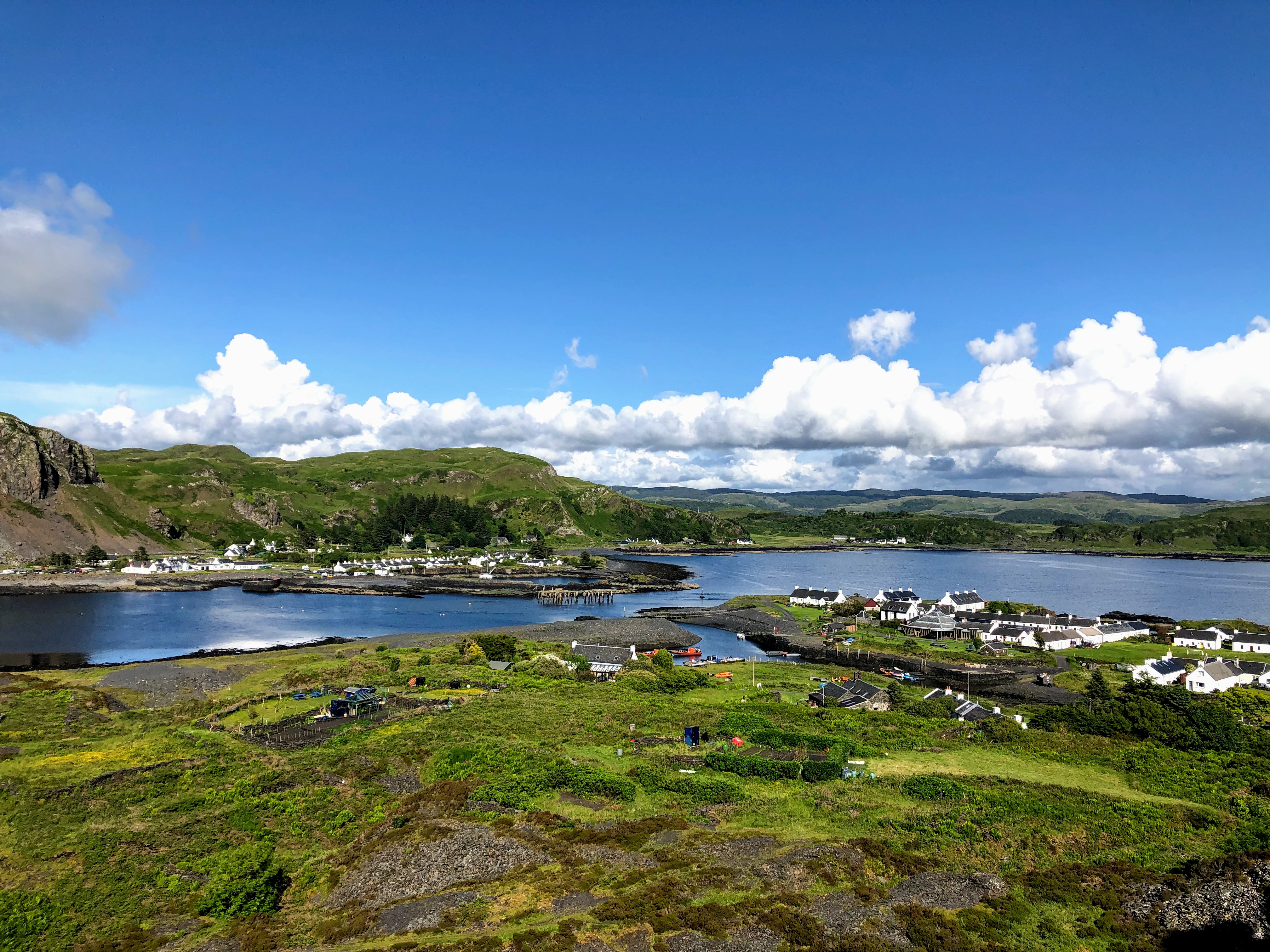 Looking out over Scarba, Belnahua, Lunga and the Garvellachs. 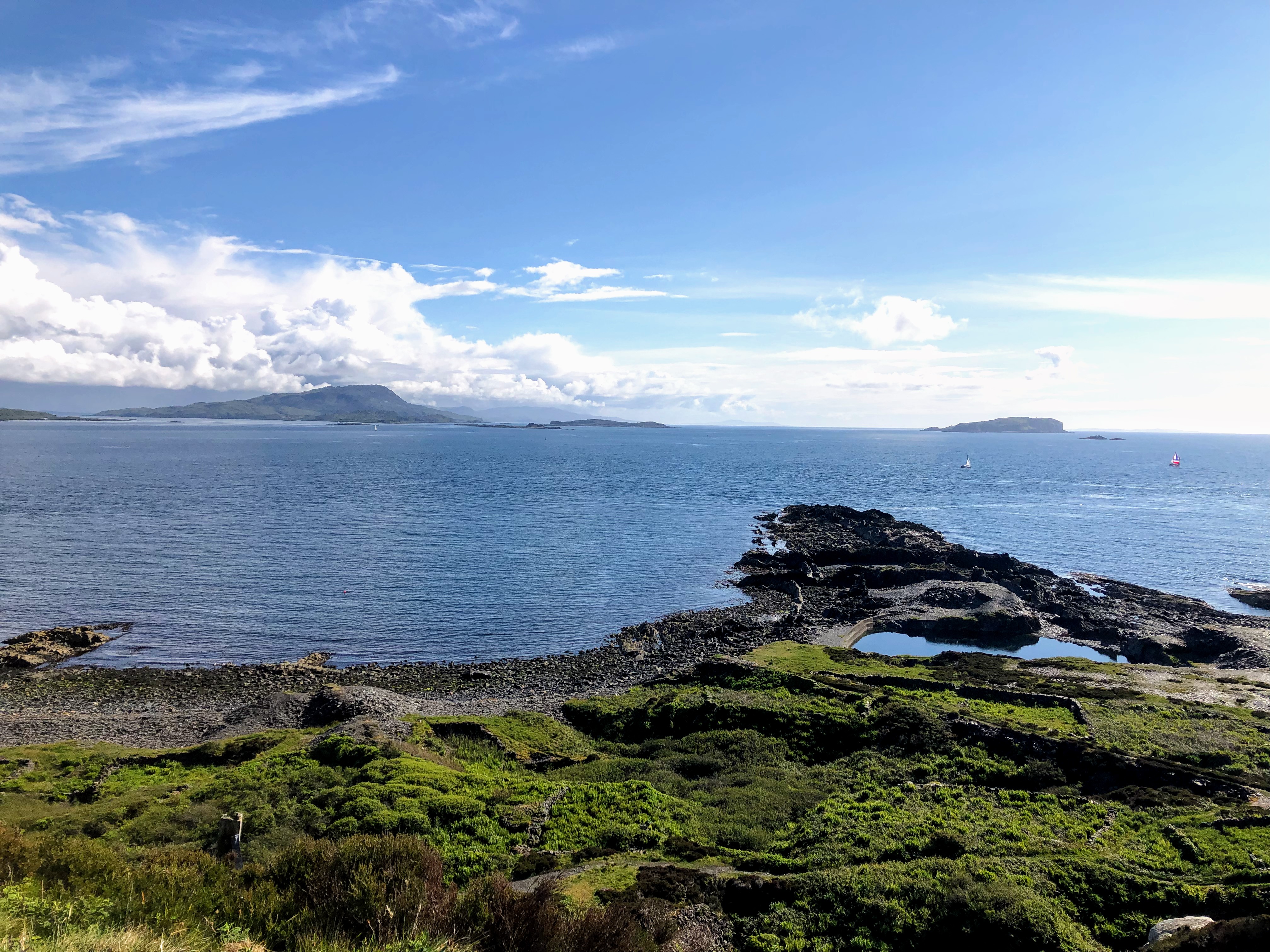 On the trig point: 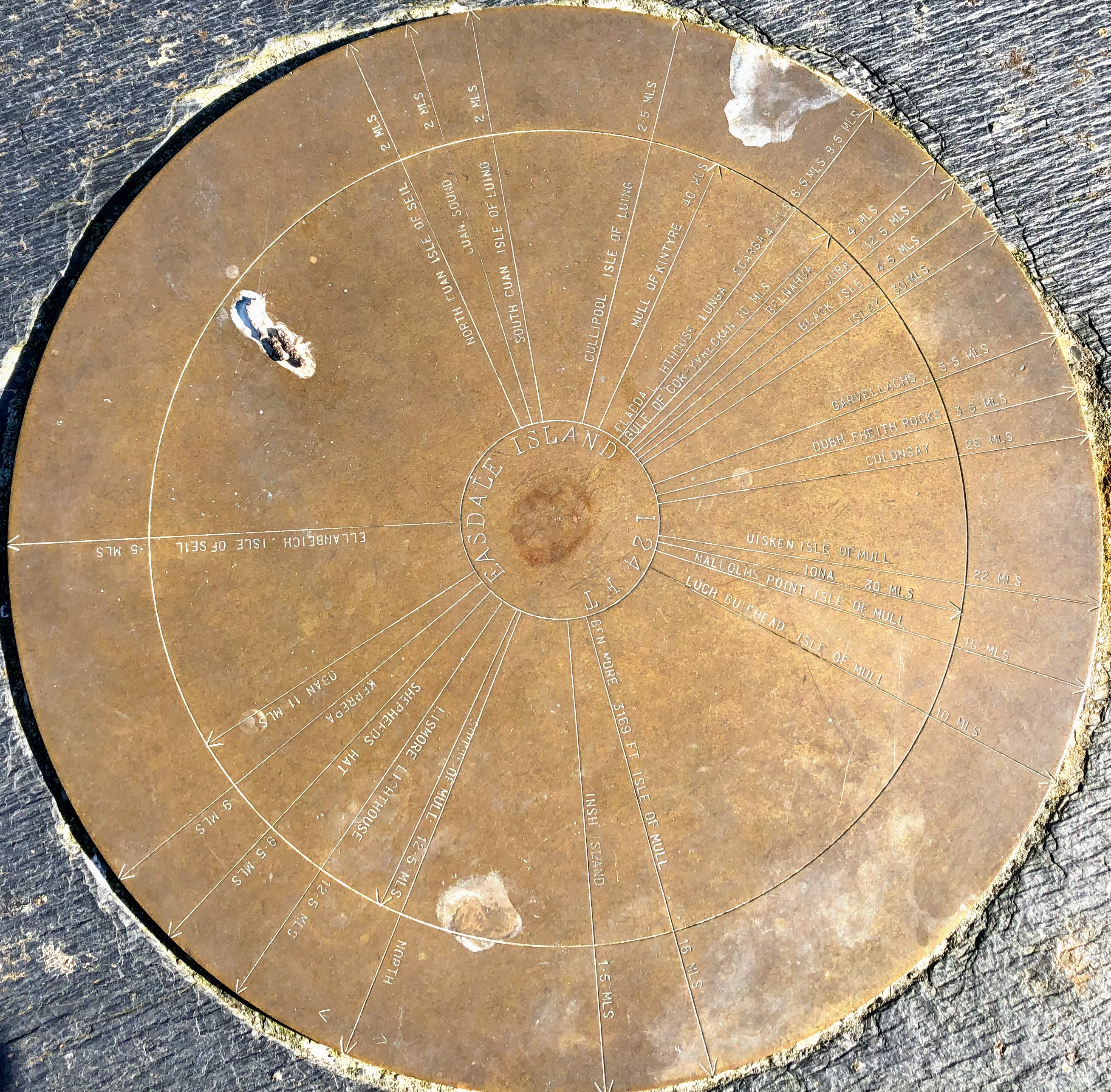 Pano with Luing on the left, then Scarba, Belnahua, Lunga, Garvellachs in the middle and Mull to the right with Insh in the foreground. In the far distance you can see as far as Jura, Islay and Colonsay (though not on the picture).

On the way back down the grouse was back, this time with his wife. 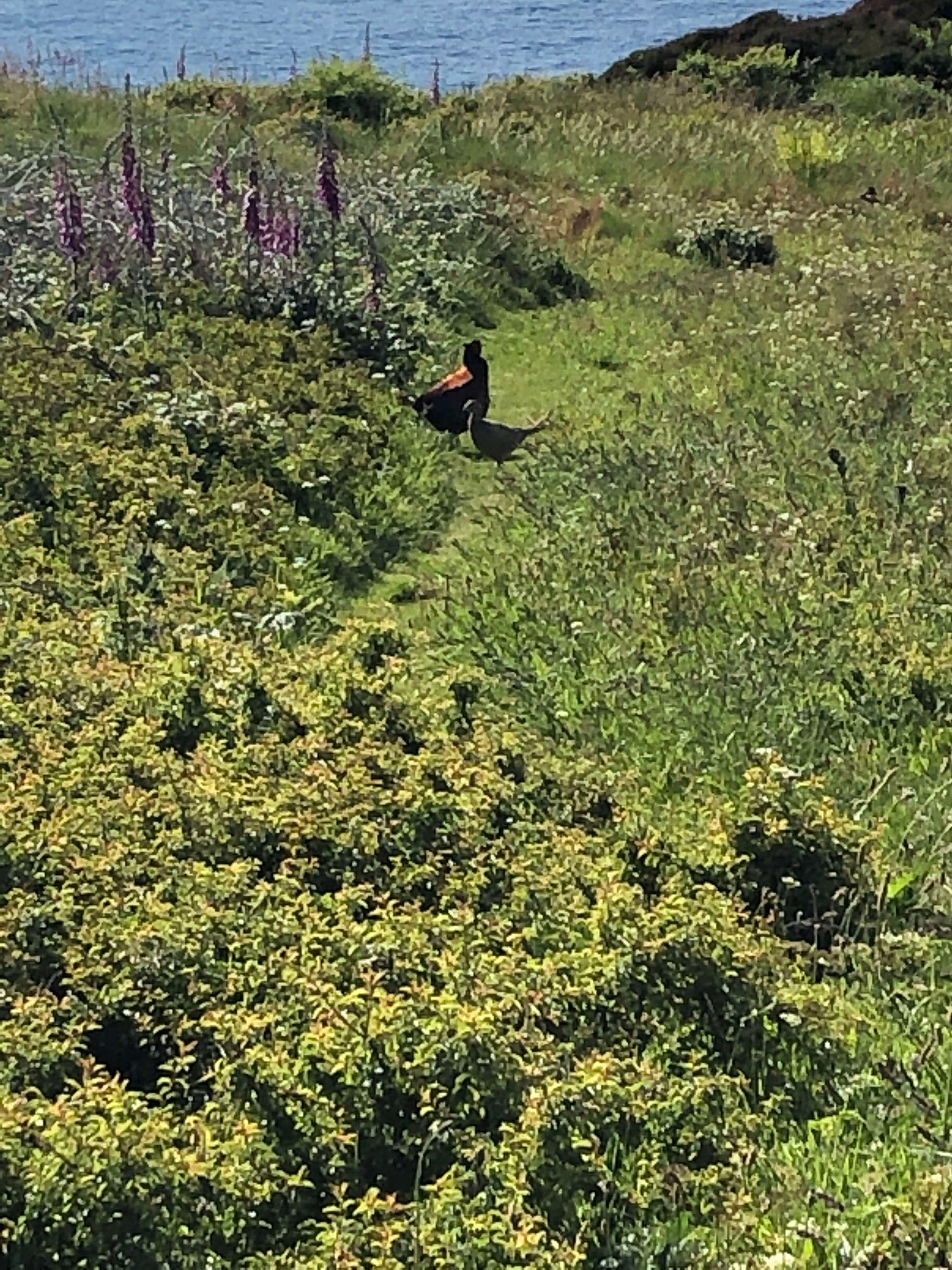 Back in the village at the wheelbarrow parking. Each inhabitant has a wheelbarrow used for transporting stuff to and from the boat. 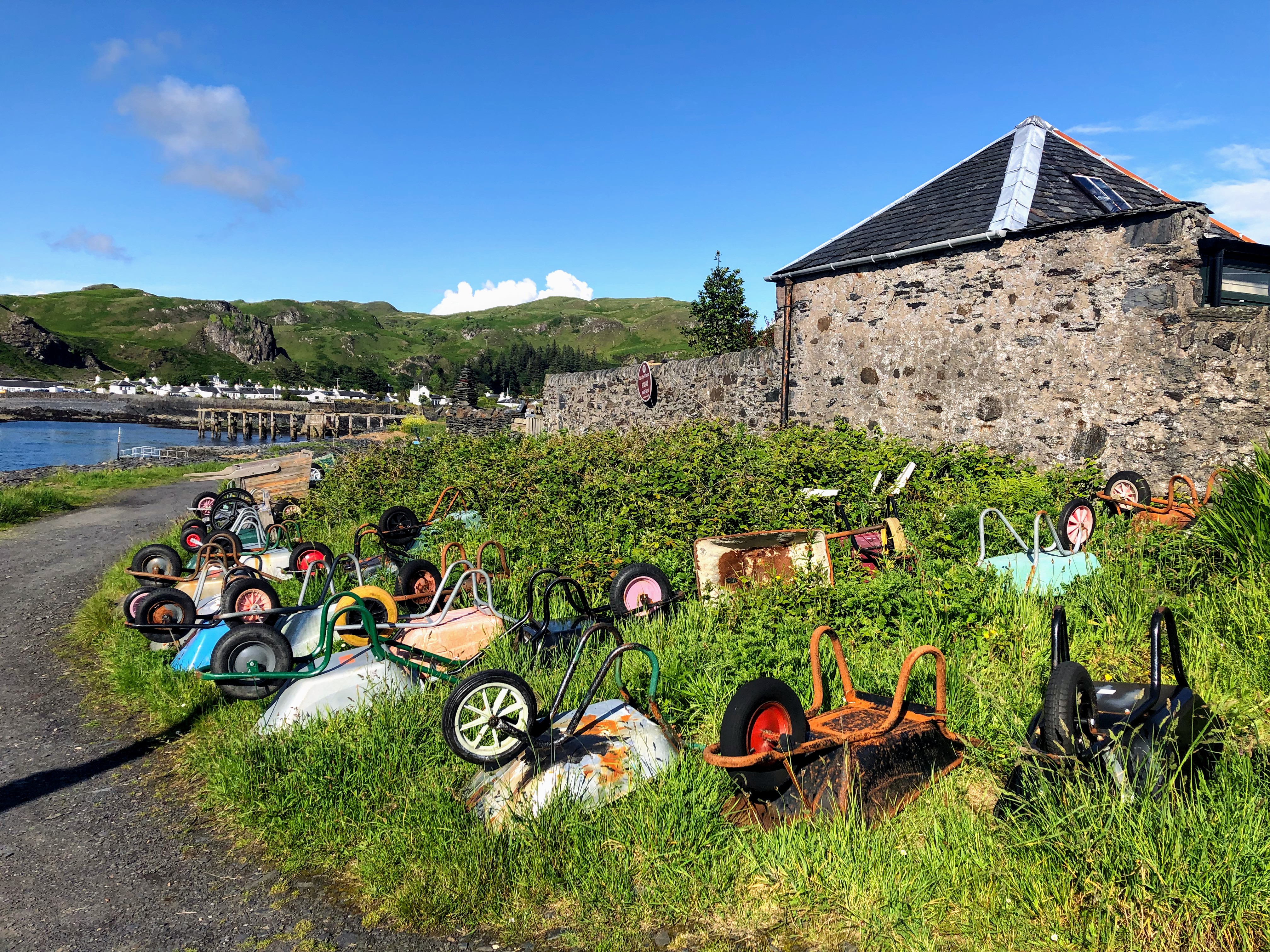 All too soon, the ferry departed and brought us back to Seil, where we had dinner and spent the night. The next day I climbed the hill behind our bed and breakfast to look out over Easdale. Has to be one of the loveliest panoramas to be found in all of the Hebrides, hasn't it. Highly recommended.

Birds and Basalt on Lunga (Treshnish) and Staffa

Five Foreigners and a Funeral on Fugloy (Faroes)