Criffel's Back Passage, with a surprise

This walk report (my first, hello!) takes you along a much less well trodden track than the well known routes up Criffel, and was the result of me wanting to get some exploring done whilst staying close to home.

Let's begin with the Covid disclaimer though. I'm one of the lucky ones, I live at the bottom of a hill. The summit of Criffel is less than 2 miles from my front door and I can be up there and back in less than an hour and a half. The police came along the day after "lockdown" was announced and spoke to myself and the farmer/landlord, whilst anyone within walking distance was permitted to be out on the hill, they didn't want anyone making a car journey out here so wanted to close the car park. Contrary to popular local belief, this is not a public car park anyway, it is on private land and was built by the farmer as he was fed up having to dodge parked cars in his tractor. He's actually now talking about expanding the car park - a farmer that's on our side! The picture below shows the sight that greeted any drivers who ignored the 4 (FOUR!) police and council signs on the half mile stretch from the main road to the car park. Some people decided just to park on the grass anyway and rip through the police tape on the gate to the path, some who did found a police note on their windscreen if they timed it wrong. The ones who got fined, that I know of, were those who travelled in groups in multiple vehicles. Interestingly, despite there being hardly anyone on the hill recently, there has been litter appearing. Clearly the types of people from Dumfries who ignore government warnings are the same types who leave glass bottles and cans on a hill. Knockendoch in the background - you'll meet her later

My route began by walking past the car park and turning right towards the boathouse, through the forestry gate and walking parallel to Loch Kindar towards New Abbey. Your journey, should you choose to follow this walk report, begins at the other side of the Loch, at the car park at the bottom of Waterloo Monument (marked "Mid Glen" on OS, find it by turning right at New Abbey Corn Mill, then a quick left/right to take you up past the duck pond) Once you're parked, head up on the path past the houses, don't go through the gate and across the fields as suggested in the WH route, you won't find the back passage that way! Not long after the houses you'll meet a forestry road, head on that and stay on it, ignoring the sign pointing the way up Knockendoch... 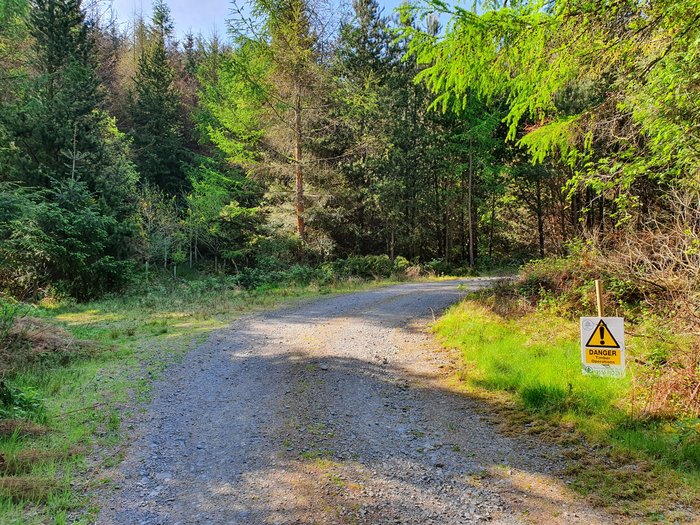 About half a mile later you'll meet a fork in the road, keep following the road straight ahead, but you'll also find an alternative route up Knockendoch here, up to your left, this is preferred by many to the path we ignored earlier... 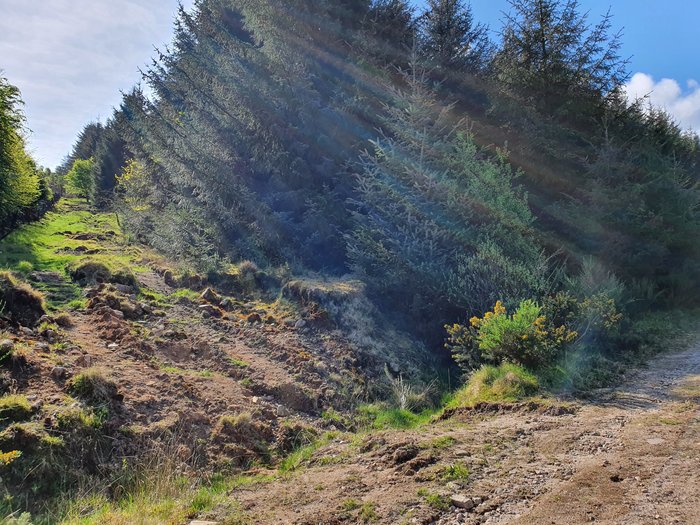 Knockendoch option for next time

Not long after the fork the forestry road suddenly ends, never mind, just head on through the trees, a fire break quickly opens up and becomes your route for the next mile or so. 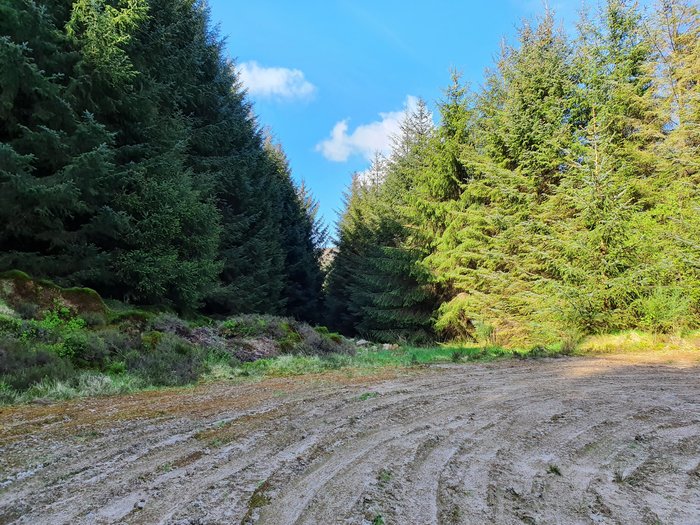 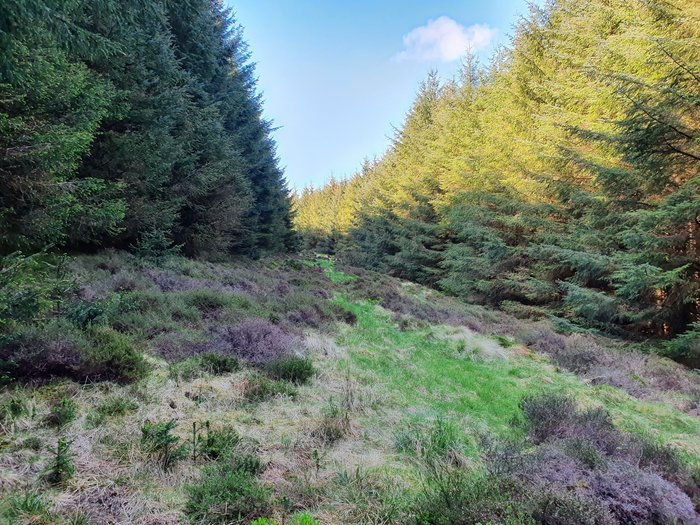 The going here was fine, in mid May after a spell of good weather, but I can imagine it being a bit less fun after a wet spell or later in the year when everything's had a chance to grow. Eventually, you'll meet Pultarson Burn, or the back passage as I have now coined it. A good thing to note at this point, is you are already at roughly half Criffel's elevation, having climbed gradually since you left the car park. It's quite a difference to the quick steep pull from the Ardwall route at my side of the hill. 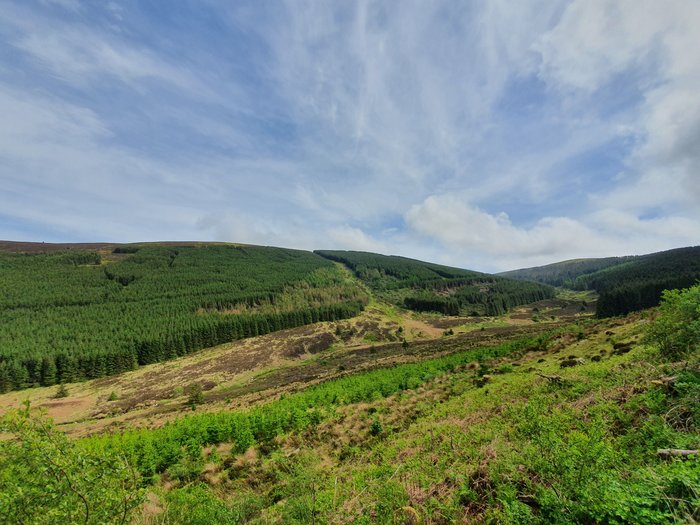 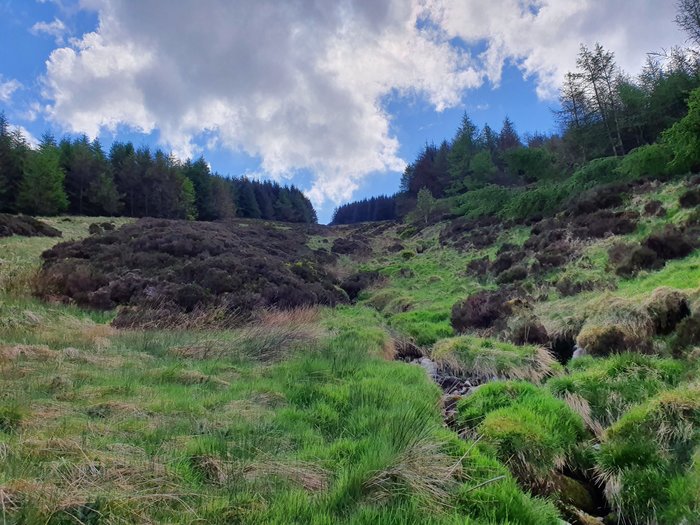 The pull up the burn wasn't as bad as expected, again I'd imagine the recent weather conditions and time of year could eat into your fun though. Stick close to the burn, don't be tempted by what looks like green openings either side, you'll quickly get caught in a heathery dead end. Sticking close does mean crossing the burn though, numerous times, but it's narrow all the way up so it's only ever an easy step over. 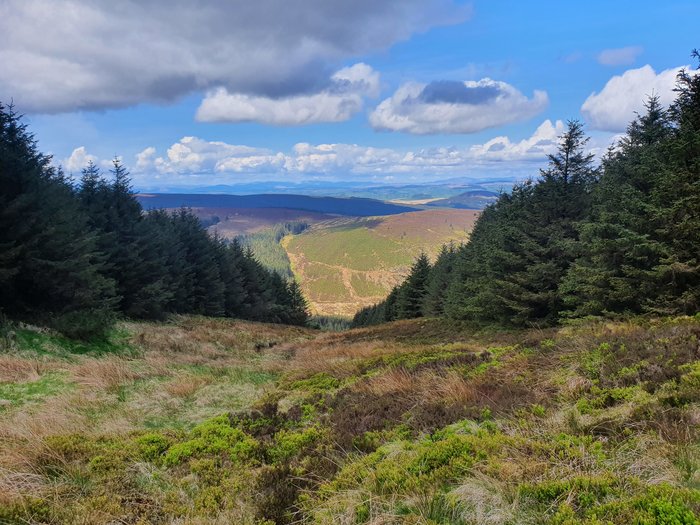 Looking back down Pultarson Burn, and out NW towards the Glenkens 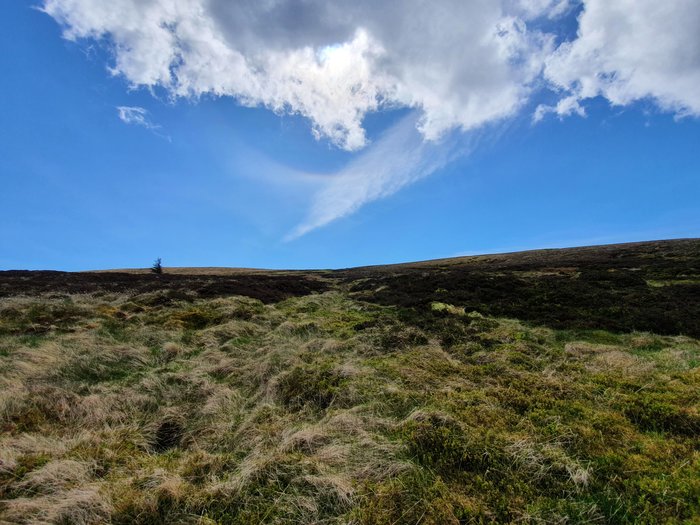 Once you're over the fenceline at the top of the burn, there's only about another 50m to ascend, and it's not as bad as it looks once you find one of the many animal tracks to follow, but if you want an unusual discovery, take a wee detour to your right. 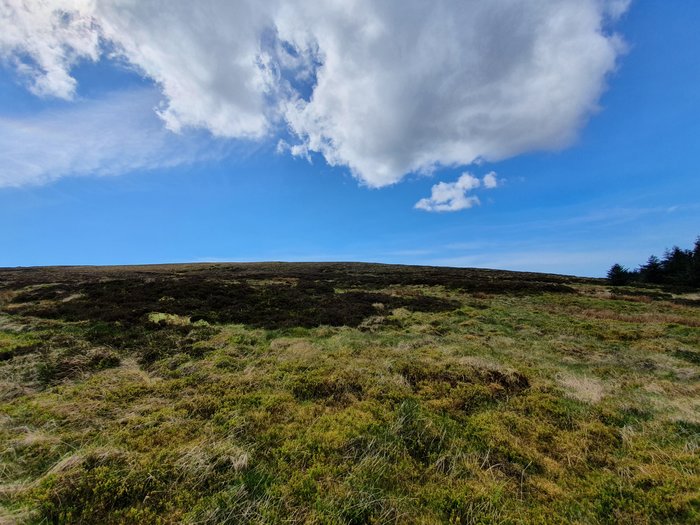 This way for your surprise 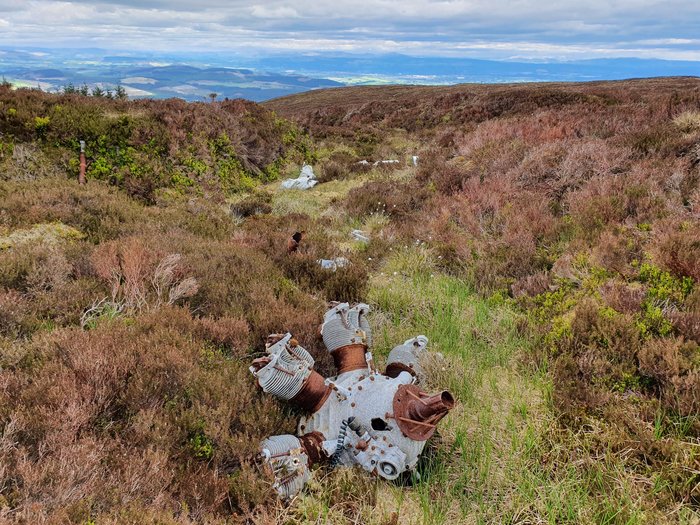 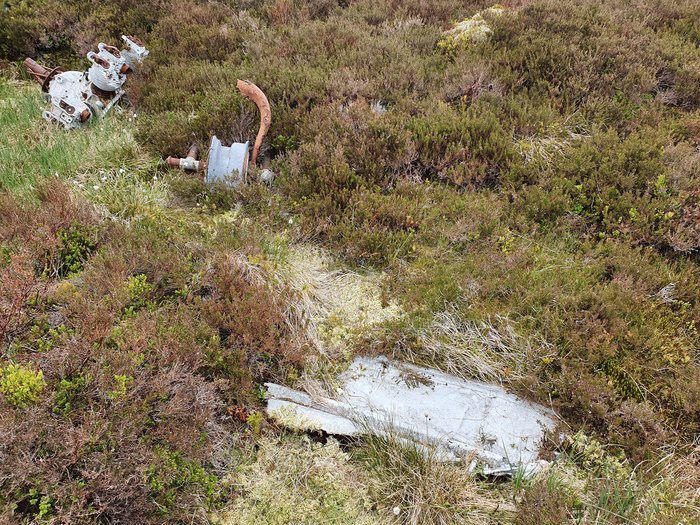 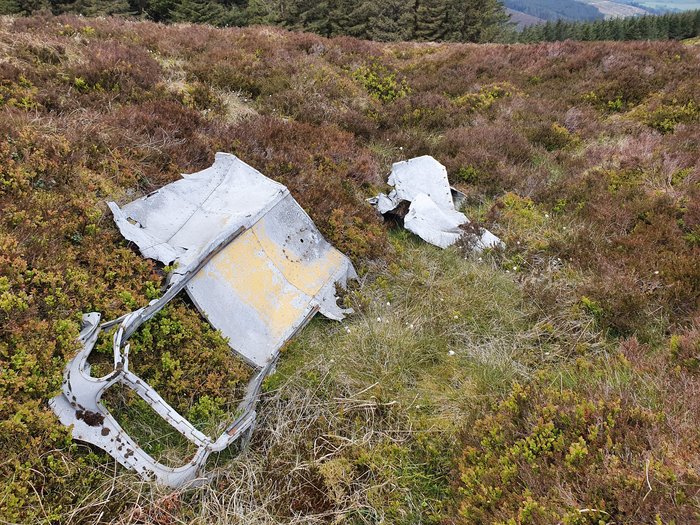 Yep, in amongst all that heather lies the remains of a plane that crashed into Criffel during WW2. I knew it was on the western slopes somewhere, but didn't know where exactly. Stupidly, I had forgotten to research it before today's hike, and I didn't have good enough signal to look up the co-ordinates whilst up there. When I got home, I found out just how close I'd been, so went back up a few days later to locate the wreckage and get the photos above. If you're looking for this, the secret to finding it is to look for an unusual scar in the hill, which must be the route the plane took as it came down.

Back on track, literally thanks to the local wildlife, from the top of the burn you're practically heading in a straight line towards Criffel's summit. If you spot a cairn to your right, you can ignore it, but if you must, be warned it's protected by tussocks. 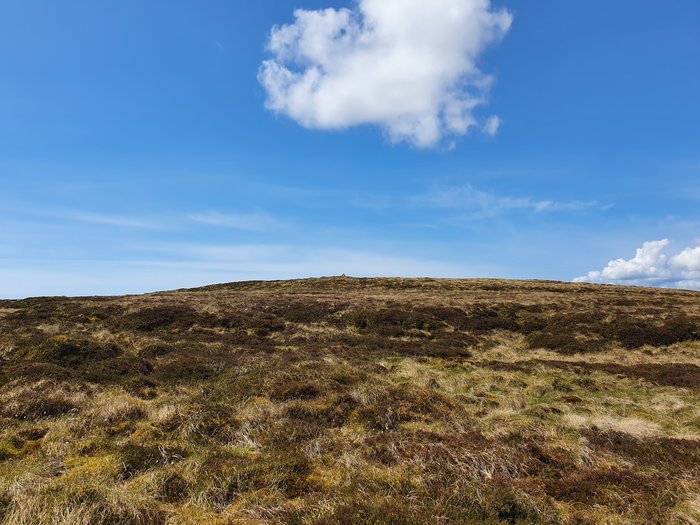 This Cairn is not your friend

Being careful not to let the animal tracks take you off course, you'll quickly and almost surprisingly (if you're used to approaching from the other side) reach the trig point and cairn, with panoramic views that take in the Solway, Skiddaw and her pals in the Lake District, the Moffat Hills, the Lowthers, the Glenkens & more. 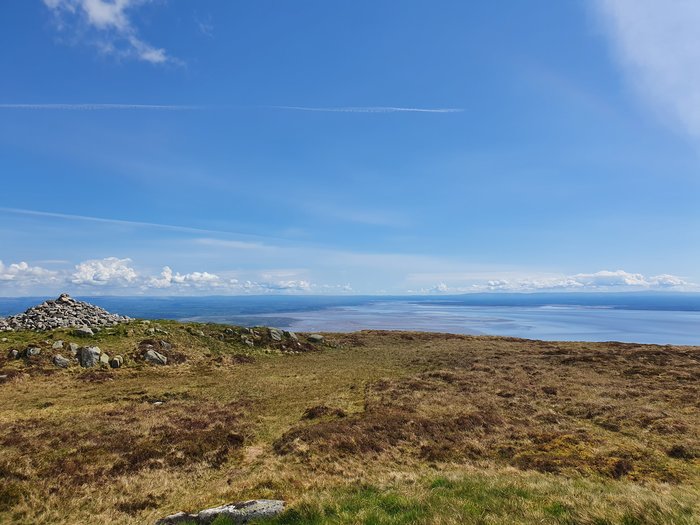 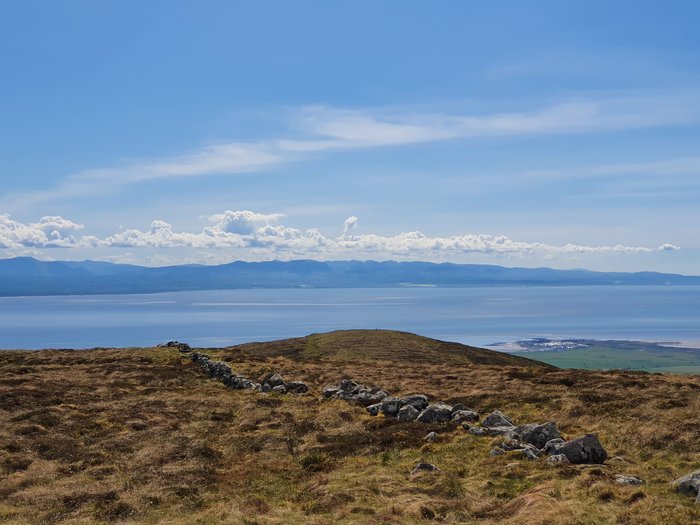 Solway, Englandshire, and a wee tip

Looking south in the picture above, you'll spot another cairn on neighbouring Drumburn Hill. It's an easy 10 minutes over to this, helped by our friendly animal tracks, and is well worth the quick detour for better, less interrupted views of the Solway, it's coastline and beyond, including the Isle of Man on a good day... 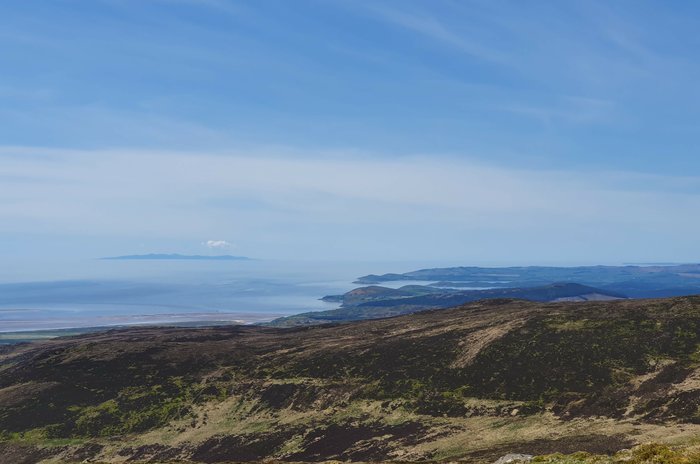 Solway Coast and Isle of Man

Now that the fun stuff's over, head back to the summit to begin your descent. You'll be going along the wide ridge to Knockendoch before descending down towards New Abbey. I'm going down the steeper route back to the Ardwall car park and home, just in shot in the picture below. 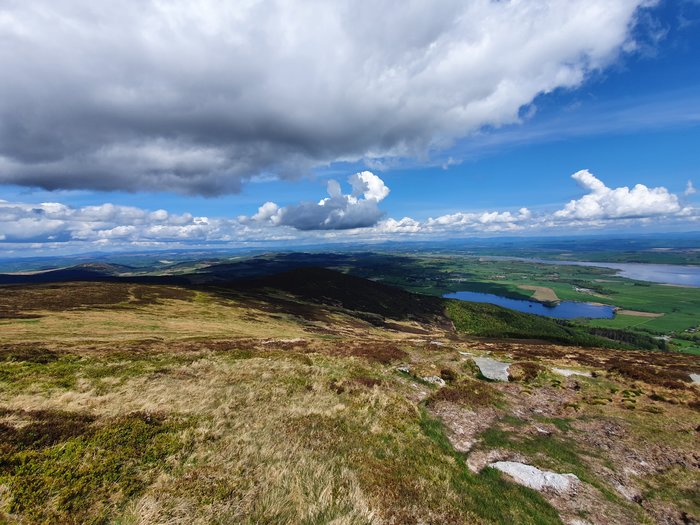 Knockendoch under a cloud, and our routes home