It has taken rather long to write my first walk report, but here it is. As my family went home to Spain for a bit of hot weather after a very long winter, I decided to go for a few days to roast myself in Torridon before returning to my work.

I had already been twice in Torridon. The second one I did Beinn Alligin and Beinn Eighe with my then 18-year old son. (He wanted to do Liathach, but we were not fit enough for that and I did not trust him for such a mountain.) From Beinn Alligin there was an amazing view to Baosbheinn and I really wanted to come back and do it! And here I was, at 12 pm, ready for the long walk after spending nearly five hours to get here from Edinburgh.

The weather was fantastic. If anything, a bit too hot (I had escaped five years ago from Spain because I could not longer stand the summers there). And the path looked promising too: In spite of the drive, my legs were not too stiff and I could made good progress, although I kept reading all the panels I encountered (they give you quite a good insight over the area).

The path was easy enough: And so, after a while, I began to have nice views of my destination: Baosbheinn on the right and Beinn an Eòin on the left.

I must say that by then I was starting to feel too hot. So when I came to the point where the burn coming from Loch na h-Oidhche divides itself in two, I put my hat and then my whole head in the water (which was not even cold). Here you have to cross (if you have not already done earlier). There are stones where you can pass when the burn is any higher, but that day it was pretty low after very hot weather in the last week and low rainfall in Spring.

And of course that was a huge advantage. Because that is precisely one of the main problems of Baosbheinn. From this point there is a very faint path that is not easy to follow, so you have to cross a very boggy area for quite a while (more or less until you get to the ridge...) and in normal conditions that can be pretty hard work. But luckily for me I did not need to watch much where to put my feet, because nearly any place was suitable. Wow! That looked like more Spain than Scotland…

Anyway, with the heat and in spite of having water dripping from my hat over my whole body, I was beginning to feel a bit unwell and had a headache. It was not too bad, but I knew perfectly well where it did come from, so I put my cap into the water every time I had an opportunity.

But eventually I did get sunstroke. Not too bad, thanks to the water, but still. I really struggled once the gradient got harder. But the views were excellent, so I took my time and enjoyed the place:

My route went to the right: 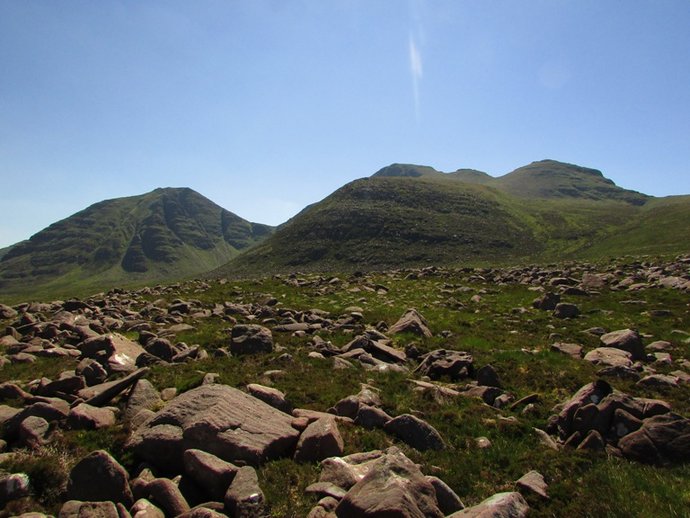 An Teallach: I want to go there! (But again, I have to get much fitter!) 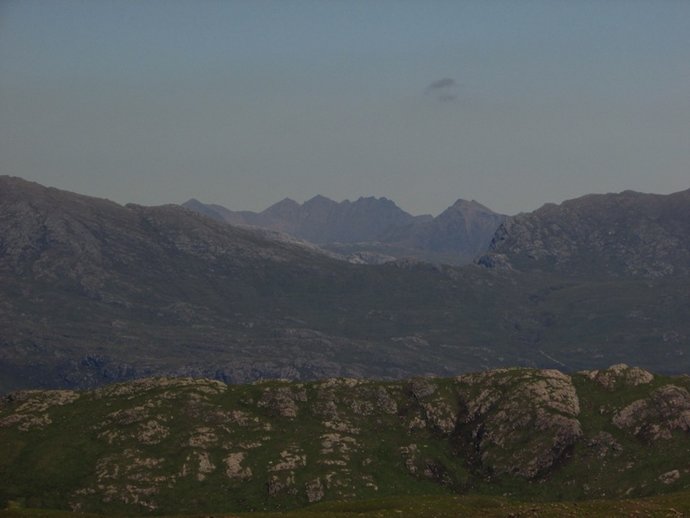 Eventually the gradient was a bit too much for me. I was not feeling well (my headache was getting worse) and my fitness was not at the desired level... Going up I met the only two people I saw in the whole walk. They said to me that they were amazed with the views at the top. Well, I expected as much...

Anyway, after much huffing and puffing (and cursing the sun, which was becoming unbearable), I reached the ridge: And in no time I was at the top, with really unforgettable views: 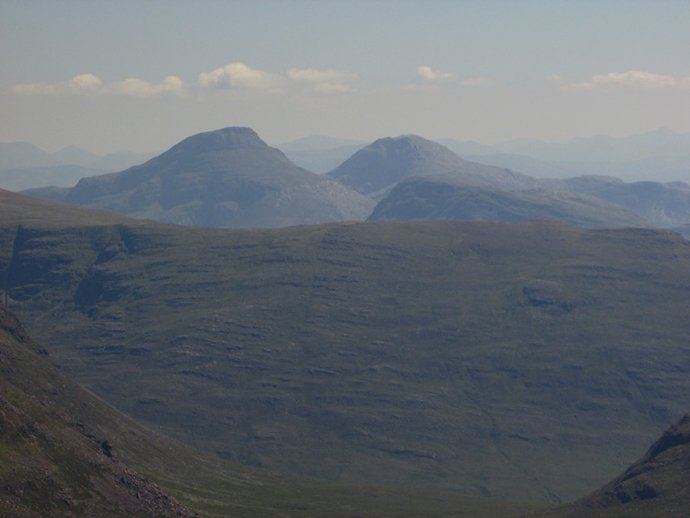 Baosbheinn ridge to the west: Zoom to Beinn Dearg and Liathach: The panorama was so fantastic that I could not move from the place. I ate my lunch (not much...) and took lots of photos and was seating admiring the views and forgetting about everything.

I thought also about going back and not doing my original plan, which was to follow the ridge to the east down to the head of Loch na h-Oidhche. My head was saying: "Go back, you are not feeling well, you cannot even eat properly". By with that panorama in front of me, I could not do that. I knew, it was not sensible at all, but also, I knew my body, I was feeling bad, but not too bad, and I really wanted to further enjoy the (changing) views. And so I took the not very sensible decision of doing the ridge and so I went down (which was quite upsetting for my stomach) and then up to the next top.

Beinn Alligin from the first bealach: Panorama from the second (unnamed) top: And further to the third top (Ceann Beag, in the foreground). From the distance it looks as you may need to scramble, but no, you don’t, there is a clear and easy path to the summit.

Zooming in (Beinn Damh looks very inviting behind the Horns of Alligin). By the way, speaking of the Horns, in good conditions (no ice, no snow and no wind) I do not think they deserve their five-boots-rating of WH. There is not much exposure or scrambling involved. Eventually I went down to the loch’s head. I could not stand the sun anymore

and going down was pretty painful, but I could not stay at the tops for ever, it was getting late and I wanted to go to the camping as soon as possible (Gairloch, which was closest).

I had been studying Beinn Dearg from the different tops, it looked so attractive I wanted to climb it, but the way I was feeling, I was not sure I could include it in my trip (at the end I did not, as I saw it was not wise, the good thing about mountains is that they do not move, so you always can come back to them).

The final part at the head of the loch was the most challenging underfoot. It was clearly wetter and you had to choose carefully your way. It can give you quite a headache in normal conditions, thus beware!!

It took me pretty long to get close to the old bothy (Poca Buidhe, now closed because it was not used in a proper way), but eventually I got to the path which was long and pretty stony in places (especially for someone that had had too much sun that day), but which eventually would deposit myself at the beginning of the walk. They were some lovely views, but I was not really enjoying them anymore.

Baosbheinn from the loch’s head: A look back once I had walked all along the loch: But the time I got to my car, I was pretty spent, but was not feeling that bad, the sun was low and I had enjoyed a good share of shade on the way back (and I took the opportunity to rest several times in those shades), so I left with better spirits than I had when I reached the head of the loch.

It is an amazing walk with fabulous views, it was just a pity I could not stand the sun (next time I will use a parasol..)

Location: Edinburgh
Activity: Mountaineer
Mountain: Curavacas
Place: Inchmahome
Gear: Boots
Ideal day out: A mixture of a walking along the moor, through the woods and a munro, but sometimes what you really need is a fairly exposed, beautiful and long ridge-walk.