our_route.gpx Open full screen  NB: Walkhighlands is not responsible for the accuracy of gpx files in users posts
As it was Shatsume's birthday weekend, I asked him what he would like to do. This met with the admirable response of 'Climb a hill!'.
The choice was between Morven and Mona Gowan, and The Buck, with the final decision being the latter thanks to my having knackered my (good) knee whilst getting up off the floor a week previously...
Also resulted in this, my first walk report.

Having decided that 'straight up and down' was a bit boring, a circular route skirting round Clayhooter Hill, then approaching across the saddle from Kebbuck Knowe. The 4 1/2 hours this took included a substantial stop for lunch, and quite a few pauses to admire the views.

Sunday dawned fine, and so sandwiches were packed, ad off we went with me trying to remember the way to Rhynie. We parked on a track just off the B9002, slightly West of the usually described parking place. There is a nice flat patch of grass, so you can park without obscuring the track. 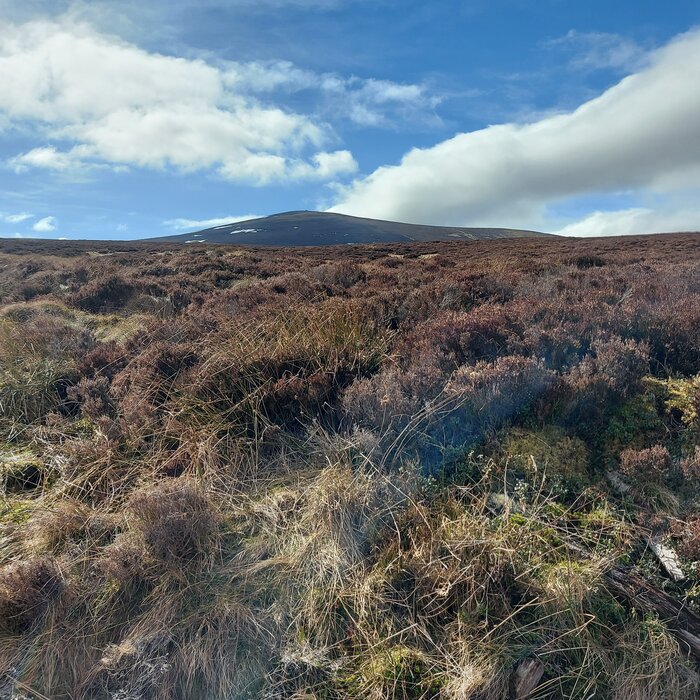 The Buck from the start point. 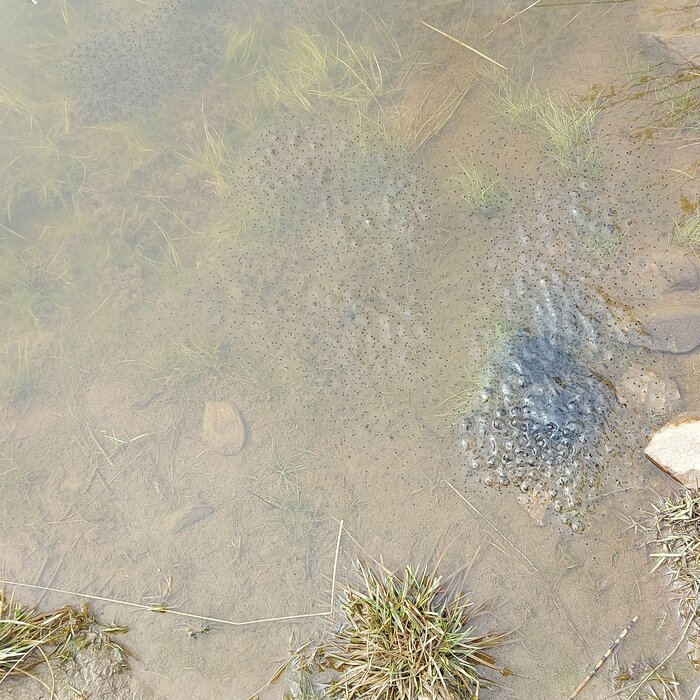 The track is clearly defined, and easy to follow, we continued straight on where there is a branch to the right, and soon met a rather lovely little pond. No frogspawn here, but a sizeable amount had been spotted earlier on, along with a large frog. Pond, reckon this would be a good picnic spot in summer

There are a number of stone markers along the track, purpose unknown, but carved with the names of something. 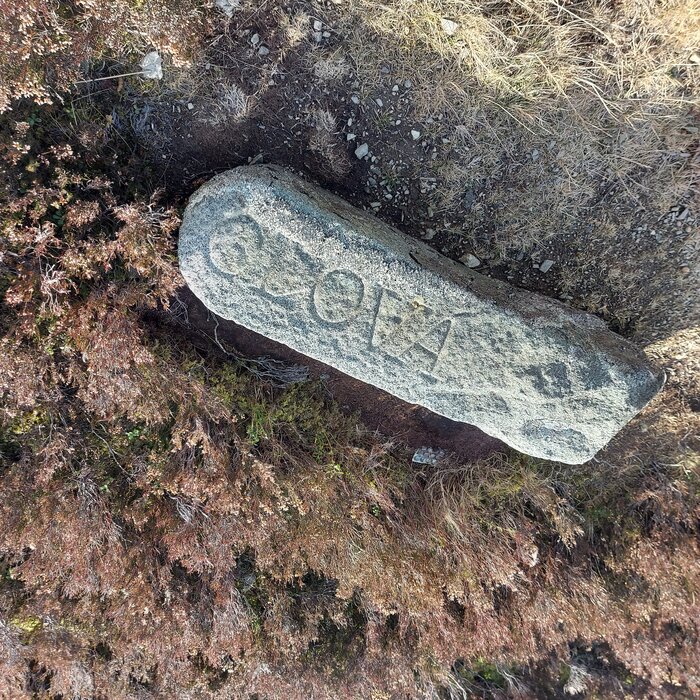 This one had fallen over.

As we carried on, skirting round Clayhooter, a herd of deer came charging down the hill, obligingly stopping for some pictures on the skyline. A good day for wildlife, as we had already surprised two brace of grouse by this point as well as the earlier frog. 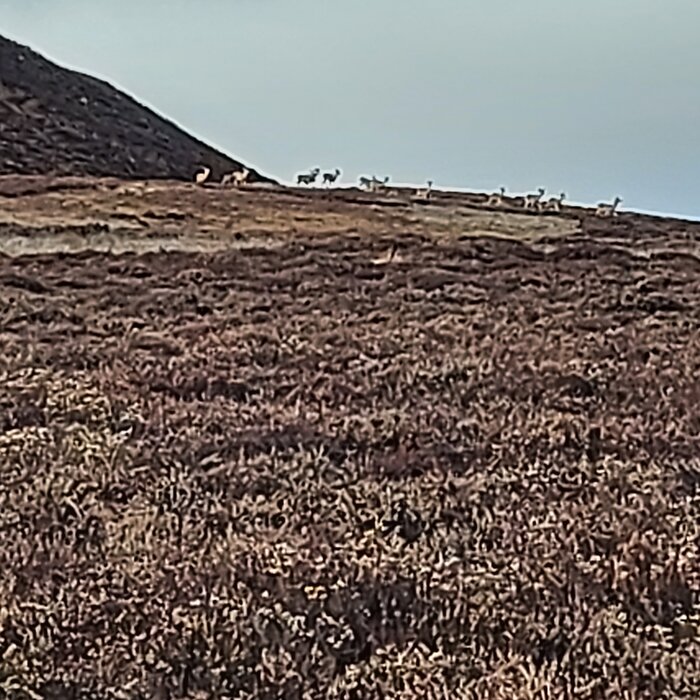 Didn't come out as well as I hoped unfortunately

Don't take the track to the right like we did, it goes nowhere, and results in a scramble through the heather when you realise where you should be. Instead continue straight until reaching a deer fence, then bear right along the edge of the plantation of pine. The far edge of this made a very good place to stop for lunch, out of the wind and quite sheltered.

After some excellent turkey sandwiches (and bemoaning having not thought to bring a flask of tea!) we continued. The ever changing views along the valley and across to the hills made this a splendid walk. We are getting better at identifying hills and mountains in the distance, but some still result in some debate.

As the gentle climb up Scad Hill was completed, the moonscape of Peat Hags hove into view, and the track petered out into several interconnected bogs. Fortunately the recent dry weather meant navigating this wast too arduous, ad the fence line at Kebbuck Knowe was reached without mishap. We followed this until we found a gate to cross over, and then followed the old (and disappearing) fence line up to The Buck itself. This was a slightly more challenging field of peat hags, and did require a bit of concentration, not least because of some partially buried wire along the old fence line. The peat hags, with The Buck behind

Once the ground started to rise again the going improved significantly, and the climb to the summit was quite enjoyable.

The trig point is perched on top of a pile of boulders ad rocks, and does need a bit of a scramble to get to. Worth it for the views of Ben Rinnes and the Cairngorms, but we did have to hang on in some of the stronger gusts. 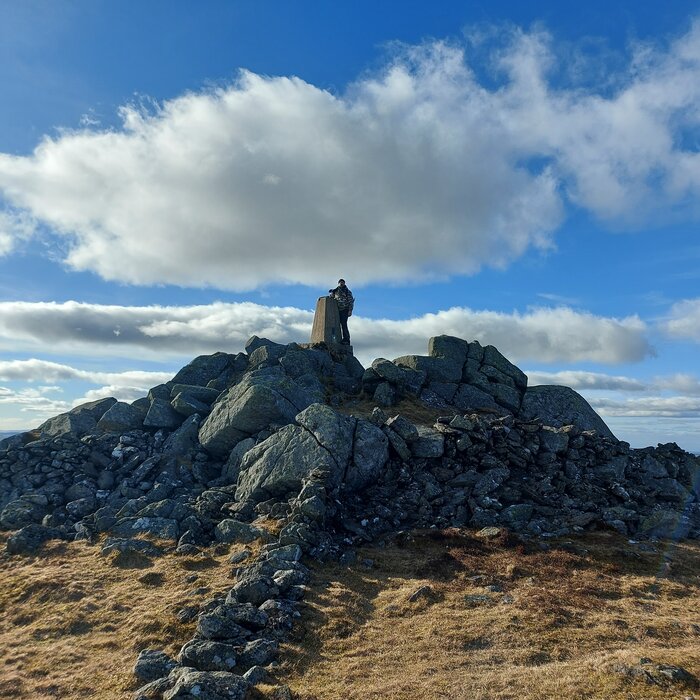 Shatsume on the trig point

Spent a bit of time identifying (or trying to) the various peaks, before heading down the more usual route, quickly discovering just why several others had reported this as very boggy. Before too long it had been proved that, as suspected, my boots were indeed no longer waterproof, after splashing through several ankle deep puddles.

The path becomes less defined near the bottom, and for the last section was completely obscured by knee deep snow, which I have to admit I had great fun striding through, soggy boots not withstanding. Glad I had my waterproof trousers on though! 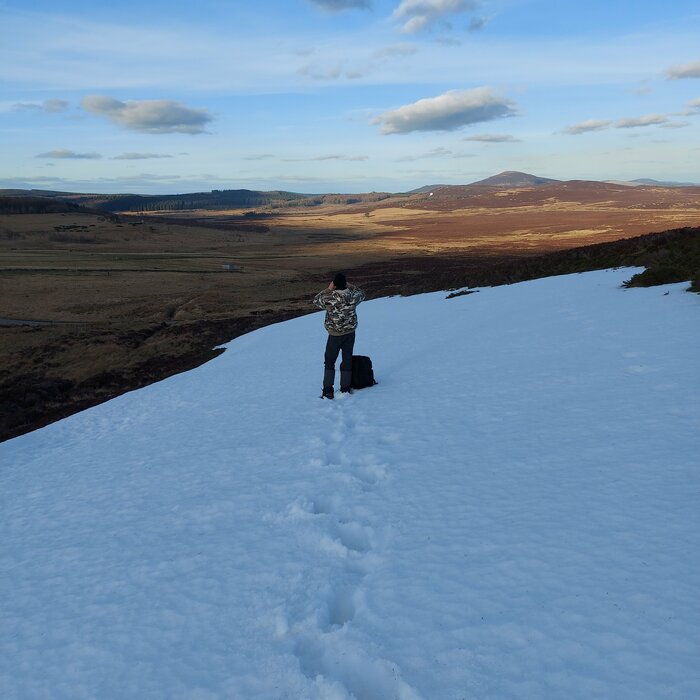 Snow field at the bottom, with Tap O Noth in the background. Shatsume spotting lapwings.

All in all, an excellent afternoon, ad very glad we decided on the longer route. And the dodgy knee held up just fine.
Click to mark this as a great report. Register or Login free to be able to rate and comment on reports (as well as access 1:25000 mapping).