Another Fife sub-2000 this week, this time heading up Dumglow and returning via the fort at Dummiefarline. Parked up near the entrance to the forestry track, there are a few places with room to park a car though be warned the litter was pretty bad so not the nicest start to a walk! The initial ascent is on the forestry track with views across to Dummiefarline. At a crossroads we turned left staying on the main track. Fallen trees, no real surprise to come across some, were blocking the way here but it was easy enough to go into the forest to go around them and the rest of the route to the end of the track was clear. Here we turned right to follow a muddy path along a firebreak. Again a few more fallen trees to navigate around but easy enough to do and we were soon out on the open hill. A stile posed no problems as the dogs were able to slip between the wire on the fence and a clear path led all the way to the summit passing the remains of what would have been the wall around the fort circling the top. Low cloud and rain meant there wasn't much in the way of views though!

I had considered a couple of options for the descent, one going down Black Loch and from there along to Loch Glow and the other just retracing our steps and continuing to follow the firebreak to go to Dummiefarline. It was the latter we opted for, I didn't fancy the steep descent on slippery wet grass! The path following the firebreak was boggy, I was glad I had my good boots on otherwise I'd have ended up with wet feet, with most of the trees having fallen away from the path. Zena was on the lead and it was just as well as we spotted a deer bounding away. We reached a deer fence with a gate and passed through to the other side. There has been some planting of what I am guessing are native trees going on here so a lot of holes. There is a grassy atv track following the fence and a bit higher up the slope a path, we started on the track but soon headed up the slope to the drier path following it around the flanks of the Inneans. An ascent of these is an option, but we just stayed lower down following the path, and then an atv track before turning off on a path to climb up to the summit of Dummiefarline where there was once another fort perched on the top. Here I heard birds calling and looked up as two birds flew overhead. The call had me confused and I couldn't identify them by sight along, but looking at photos it looks like it was two peregrines having a bit of a dispute as one eventually turned to return to the forest while the other headed away. Path up through the forest firebreak to Dumglow 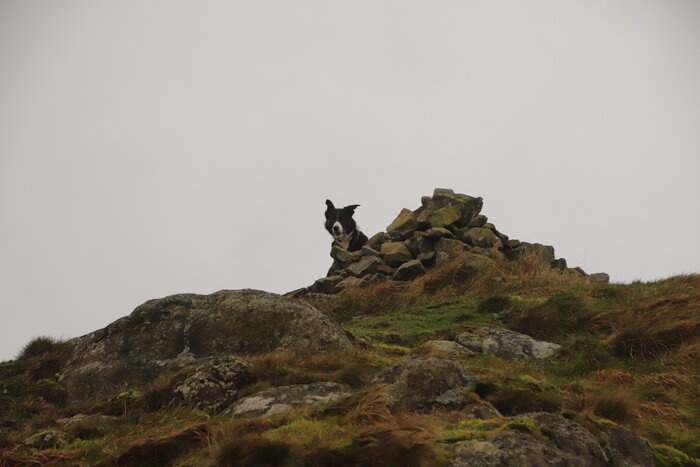