With Moss retired from hills, it was finally time for Zena to step out the shadows and take the lead out bagging herself another Corbett - Mount Battock. It wasn't easy setting out without Moss who has been my hiking companion for 5 years

This was Millie's first hill without Fly too nearly 6 years ago, and also the first one Moss did after Coinneach got sacked though she went up via Clachnaben. It's not a complicated route with a clear track pretty much all the way up. Without the influence of the others, Zena was a wonderfully calm companion. It would have been a boring walk had it not being for this: 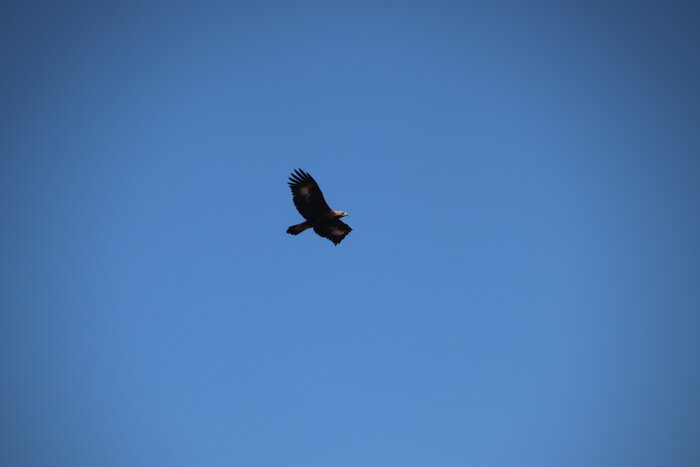 Interestingly I saw a Golden Eagle the last time I was up Mount Battock too! Other sightings were ring ouzel, a red kite confusingly without the distinctive forked tail (guessing it is moulting), skylark, meadow pipit, red grouse, red-legged partridge, lapwing, oystercatcher, golden plover, common lizard and I think a swallow! Something to watch out for if you have dogs is a cattle grid at the gate at stage 3 in the route description, I'm pretty sure it wasn't there when I went up with Millie and the style at the side is not easy for dogs to use. No problem for Zena, she was able to jump across but something to bear in mind if you have a larger dog that doesn't like doing long jump! We reached the summit with its double windshelter and trig point, bit too hazy for good views but could see across to Bennachie and Lochnagar which still held onto a bit of snow. Our return was the same way, while the route description for the alternative descent mentions a fence not posing difficulties to cross I wasn't sure if that would include for the dog as well. On the way down we met a few other people heading up. I could have probably left it another half hour before setting off, but given the car park was full when I returned was glad I hadn't left it to chance and got there early! Having a cool down in the ford


Hill of Rowan circuit via Milton

Airlie Monument and The Goal

The Buck and Tap o'Noth