This is the second time I have written an account of this walk. You’d think I’d learn not to type directly into websites where the slightest glitch or an accidental ‘previous page’ can leave one undone. So this is in Word for a timely cut n paste later.

Motivated by a fine ascent of Ben More on Mull in blazin sunshine I fancied an easy one and have long thought to follow in Danny Boyle’s virtual footsteps, (virtual cuz I’m certain he’d have had a Range Rover and no walked anywhere), to Corrour Station and in the fictional handful of footsteps of Tommy, Rents, Spud and Sick Boy towards a fine looking hill.

The Trainspotting director didnae point his cameras at the Munro hereabouts which I was there to climb, but towards the better looking but height challenged (at 906m by a mere 8m ) non-Munro that is Leum Uilleim. Waiting for Godot on the West Highland line

My plan had included pal Ivor from my last jaunt, but he left it too late to book a ticket through Trainline. However one discovered on the day that you can buy on the train, there was no shortage as the train was less than half full and the apparent limit he ran into is bogus and even phone enquiries did not allow him to buy a ticket online or on phone and no-one bothered to say just buy a ticket aboard. Fuds eh?

By such vicissitudes did one default to a solo trip. My plan was to drive Bikey (Tracer 900GT) to Upper Tyndrum and padlock the beast to something solid before taking the 3-stop hop to Corrour. Somewhat uncertain of what if any facilities might exist at Corrour Station, I was planning a night stop and to feed myself through until the return the following day. There are three trains a day on West Highland line and you could take first or second and still climb the hill same day. You can get an early return train around 8 a.m. or sleep late and get one around noon.

My planning was a bit wanting in that I’d forgotten a lighter for my stove. Not to worry – a veritable platoon of assorted Geordies showed up at Tyndrum (Upper) having trekked up the considerable approach road and when I asked if any had a lighter it was like a mini Grangemouth they produced so many…… It turned out this made no difference – I brought the wrong fuel. Even THIS made no difference because in fact behind Mr Boyle's cameras was a very welcoming full service café, with very decent pub food and restaurant quality meals (venison casserole – yum), which is also licensed and open until 9:00 p.m. This is The Corrour Station House and is a brilliant place to start/end what is normally a fairly easy Munro tick. Beinn na Lap is the Munro and in decent weather might even be fun. There is a road of sorts heading into the estate and to the Ossian Hostel, then a route one yomp to gain a ridge which after a right turn has a vague path to the summit. Unfortunately it poured with rain almost the entire day and I could see nothing of Loch Ossian or much else except glimpses under clouds towards the hostel. Just as the rain set in. The route is simple enough; follow that brown stain to the skyline then turn right and follow the fall line up the ridge. There are, in this picture, the only two other people on the hill that day. Honest

Before setting off up the hill I checked, no surprise, that the accommodation was fully occupied at the Station House but I could camp on a patch of adjacent short grass. I took a half hour to pitch my tent and inflate my mat, stash my stuff etc. So-oo glad I did it in advance, because the torrential rain when I got back would have rendered a tent-pitch less than fun.

I saw only two other people all day who were ahead of me on the yomp to gain the ridge and whom I did not see again until I was nearly at the top. They had a border collie – a breed I like – who ran over and tried to hump my leg. I didn’t like him that much so I set off toward the vagueness of the cluttered indistinct summit piles of shattered rock, shelters, cairns etc. In the greyout I was grateful for the tiny wee lochain that allows the certainty of position to ID the local prominence that is the actual summit. There was no let-up from the rain and I was soaked through so a quick about turn and off I went. Overshot the ridge-to-yomp turning point but regained the down track soon enough. No photos worth taking in the grey until the actual summit. Tick. Run away. At last a view. Somewhere in those trees is the Ossian hostel and the approach road may also be seen.

Back at the ranch as it were I had a pint, maybe two, before attempting a cramped, skin-out change of clothing in a tiny tent with a tympany from the heavens pounding the fly-sheet. I got back in the pub/café for my venison casserole and was surprised the substantial puddle I’d made earlier was mostly gone. Later they told me they had mopped up when I left.
The night was not comfortable, my stove attempts with bio-ethanol were a disaster, but the worst was the midge burden. The rain kept ‘em down outside but in the little bit of canopy outside my inner tent they lurked with menace. Any excursions through this domain allowed ‘em in and at me until I could re-zip and squish intruders. During the tent-strike and bag they were pretty bad despite chemical defences. While waiting for the early train I had to keep walking round and round the vicinity as no-where outside was free of them. The café opens only 5 minutes before the train arrives so it was keep moving or be breakfast. 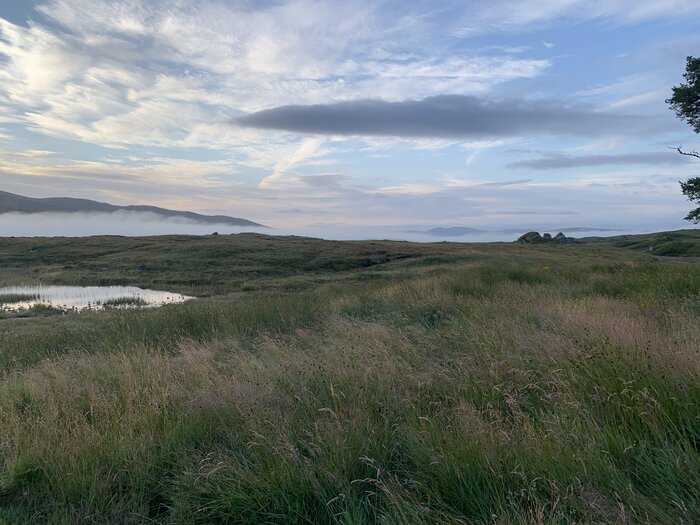 View from tent in morning 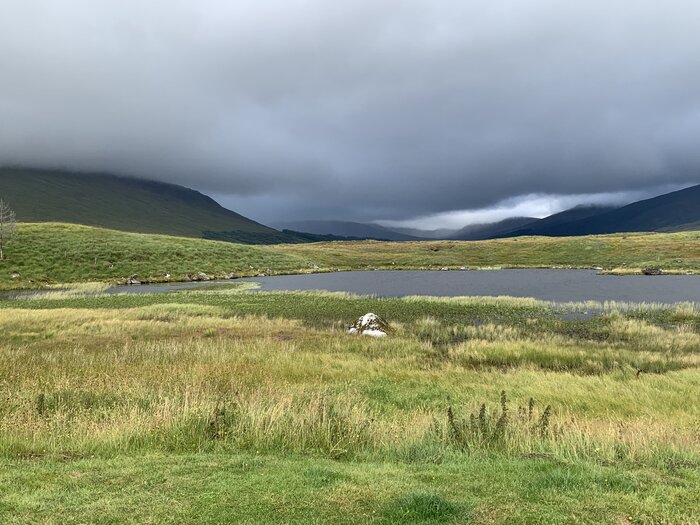 Might actually see the hill I climbed if the clouds move..... 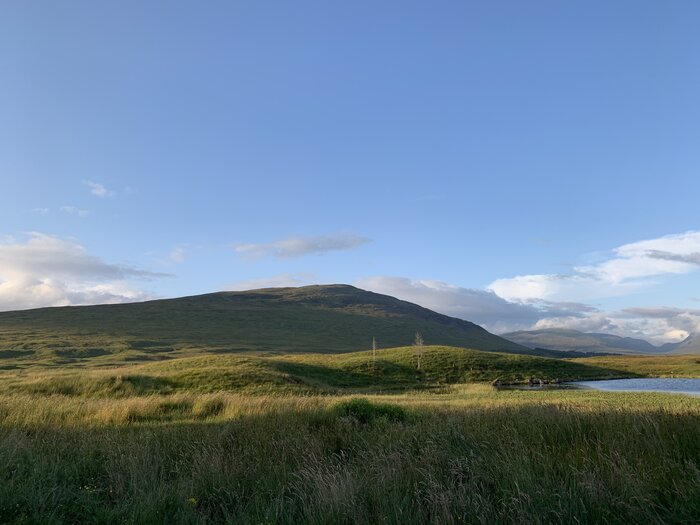 Another Munro (#157 I think) and an interesting jaunt. The train broke down for an hour on Rannoch Moor out of 2G signal range which was tedious but I got a £4.70 refund online which I punted to their suggested charity MIND.
Once home I dismantled my stove, tried again, looked up the service steps on MSR website, did them and only then did it dawn on me that ethanol is nae use. Billed as a multifuel stove, I wrongly assumed any old burny fluid would do. Nah. Part of the problem is that, kerosene, white gas, petrol, paraffin are used throughout the English speaking world but not for exactly the same stuff. My error was to assume the American term white gas meant I could use white spirit but no. Alcohols don’t work and any old petroleum fuel will. Ho hum.
Click to mark this as a great report. Register or Login free to be able to rate and comment on reports (as well as access 1:25000 mapping).

Walking in a winter wonderland

Keen to be in the hills. Solo if needs be.