A ramble up Bein Narnain


Logan and Rogue tackle The Cobbler

With a rare day off work and the weather looking good (i.e. not raining!), I really needed to get outside.

Not being a very experienced hill walker and having the fitness level of an area manager who spend all his working time in a car drinking latte and eating muffins I was not planning on anything to tough. I decided to take the dogs for a walk up towards the Cobbler and see what happens. My goal was the Narnain boulders for lunch and then back to the car park.

It was a bit cloudy and misty when we set off and the summits were obscured but it was dry and a fine day to be outside. Being a weekday the car park was quiet as was the path up the hill. The zig zag up the first part of the path was fairly easy and just started to warm up the old legs. Logan and Rogue as always wanted to run and every time I stopped for a picture they kept hurrying me along. The views back to the mist and cloud on Loch Long were eerie but beautiful. We finally broke through out of the trees and started to follow the burn up the glen. Still no views of the Cobbler or the surrounding mountains but we amused ourselves by playing in all the streams and scrambling on any boulders we found. It turns out Logan and Rogue are natural scramblers! As we had our break a Stags cry broke the silence of the glen and after a moment I spotted him and his harem traversing the slopes of Beinn Narnain.

The dogs still had boundless energy and surprising so had I so we decided to carry on up the glen and see how far we could go.

Reaching the folk in the path we took the easier route up towards the Cobbler although an unhappy Logan had to go on the lead as his natural shepherding instincts would not be appreciated by the sheep in the slopes. This meant a tough climb up the “stairs” with Logan pulling me up. Reaching the top of the path we had a brief stop and met a dog Cocoa with his owners coming down.

Then with a final push we reached the top! Even the dogs looked tired. Unfortunately the views were not existent but that didn’t stop me feeling great about reaching the top. As there was no one else around and I had the dogs I used them as the perfect excuse not to “thread the needle”!
We wandered along the summit ridge visiting the tops we could get to and then started to head down.

As is often he case the summits started to clear as we walked away and I got the first real view of the Cobbler. 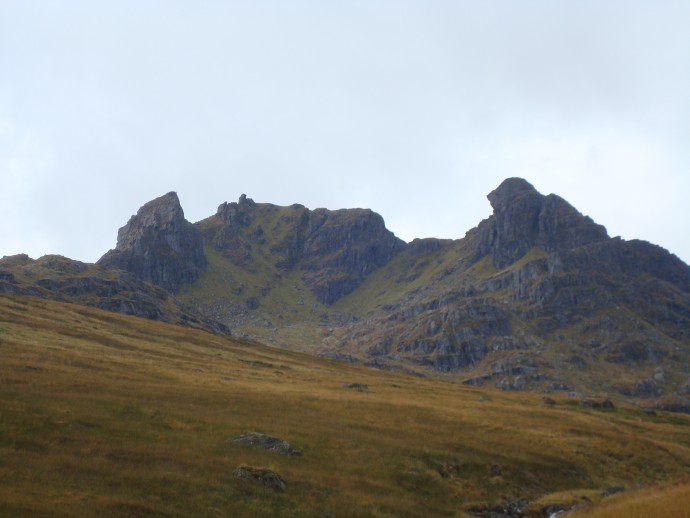 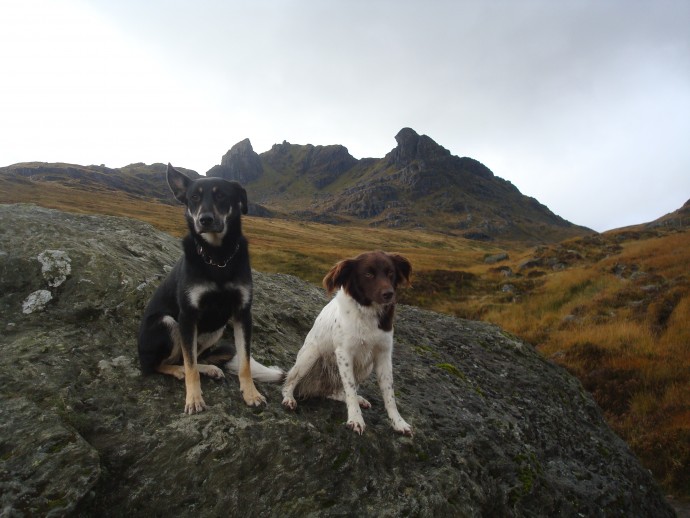 Wow we climbed that!

The views of Ben Lommond, Cruach Tarbiet and Loch Long were much better on the way down. All in all a fantastic day and with so many walks in the Arrochar Alps to do we are really looking forward to going back and exploring some more!
Click to mark this as a great report. Register or Login free to be able to rate and comment on reports (as well as access 1:25000 mapping).

First Walk for me and the dogs!