Having read the previous reports (and looked at the beautiful accompanying photos) of this walk, I was really looking forward to it.

The start wasn’t great. The wind was pretty strong and small flecks of rain were being blown straight into my face. However, within 10 minutes the wind had died down and the rain abated. Hurray!

The walk to the Bay is not particularly inspiring. In fact, I would call it a ‘trudge’ rather than a walk. The track itself is good, if perhaps a little boggy in places and over-worn in others. However, in spite of the pretty little tarns along the route, it is all rather monotonous. Maybe it was the slate grey skies that made it seem this way. If the weather had been a little more clement, with the odd ray of sunshine, it might have been a pleasant stroll rather than a slog! There were a couple of highlights en route. I met a flock of sheep which seemed intent on forcing me off of the trail. I know this is going to sound stupid, but for a couple of seconds they actually looked quite intimidating heading towards me. Really! They soon turned tail and fled off into the heather though (phew!) closely followed by a sheepdog and a whistling shepherd/farmer in his 4x4 (windows down so the dog could hear the whistles!) I spotted a little boat alongside Loch na Gainimh, and I guess that it’s used for fishing. The track leads around the edge of Loch a’ Mhuilinn, and I really liked the lovely red sand around its banks. When I arrived at the Bay I decided not to head down through the dunes to the beach. Instead I headed right and skirted around some crags towards Sandwood Loch. I eventually came down on the banks of the Loch and walked a little way along. Up behind me I could see the ruins of an old cottage (also visible from the top). Visually, it must have been a very impressive place to live. I then headed back to the Bay along the loch side. There was a lot of ‘froth’ on the banks of the loch. Does anyone know what this is? It can’t be pollution, can it? The place where the loch flows across the beach into the sea is interesting. There are lots of beautifully rounded boulders (too large to be pebbles) and the water is a lovely deep reddish-brown colour. I then followed the river until it entered the sea, and carried on along the beach in a south-westerly direction until the stack (The Herdsman?) disappeared from sight. I think the saddest part of my day was climbing back up through the dunes to find the remnants of someone’s wild camp. There was a lot of stuff there - probably left by someone who had intended to return (tent, ropes, chairs, plastic tubs etc) but now looking weather-beaten and broken. I hope ‘they’ do return to remove their debris! And then the trudge back to the car! 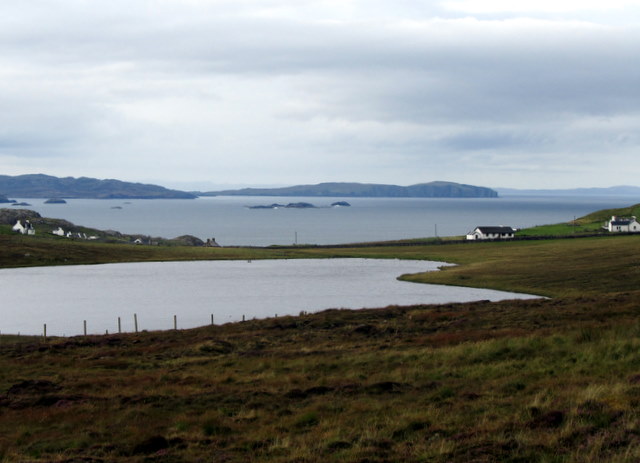 I think Sandwood Bay is really rather magical. I only saw 4 other people on the beach whilst I was there, and I liked the fact that it felt very isolated. I passed a few people during my walk there, and a few more on my way back, so it is quite well-frequented, even on grey days. I guess it would be busier on a sunnier day – and maybe it would be more visually pleasing, but without the same feeling of isolation. I hope I’ll have the chance to go back one day (in the sunshine!)
Click to mark this as a great report. Register or Login free to be able to rate and comment on reports (as well as access 1:25000 mapping).