At the end of May 2017, my brother and I went to the island of Skye, to walk a part of the famous Skye trail. We really enjoyed it and we would like to share some useful practical information, hoping that it could help future walkers in their planning.
As I’m a wildlife enthusiast, you’ll also find information about some of our observations at the end of the report : seals, otter, golden plover, golden eagle, sea eagle and great skua.

Our 5-day route is described below, and you can also see it on the attached map. We followed the trail as indicated on the Harvey Maps map and we will refer to it in the following report.

Day 1 : from Portree to the Storr along the Trotternish Ridge then back to Portree following the eastern alternative route
Day 2 : from Portree to Sligachan
Day 3 : from Sligachan to Elgol
Day 4 : from Elgol to Boreraig
Day 5 : From Boreraig to Broadford

A waterproof map is HIGHLY recommended. The one published by Harvey Maps is quite good, very tough and detailed, but it only includes the Skye Trail itself, and not the whole island.

Take some good rain clothes, not too thick if possible to avoid sweating while walking, and don’t hesitate to use them before being soaked by the sneaky Scottish rain.

Be sure to have a really waterproof cover for your bag.

Take some waterproof bags (garbage bags for exemple) and put all your stuff in, just in case water manages to enter your bag anyway (trust us, it happens). You don’t want to have wet clothes or sleeping bag for your whole trip.

Don’t underestimate the maddening power of midges, the tiny Scottish mosquitoes: they fly right in your mouth and eyes and bite every uncovered portion of skin. A repellent can be a really good investment.

Forest are not always a good landmark since some big patches seem to be cut away regularly. And forest are quite scarce so you’ll have to use others landmarks anyway.

There is a campsite full of little « hobbit houses » where the path following the Trotternish Ridge is supposed to meet the road, 1.5 miles (2.5km) north of the centre of Portree. It wasn’t indicated on our map so we went through it but there might be another, better, way around.

For those who want to go wild camping, it’s possible to set up a tent juste behind that new campsite. It’s a bit rough though.

A much better wild campsite is at the other end of our route, a little bit before arriving in Portree by the eastern alternative route. There, you have to go down the hills along the sea and there are some reaaaaaally nice places to set up your tent, with great view over the sea and the surrounding moutains. But be carreful : the place is swarming with rabbits, and who knows what they are up to…

Most of the shops and pubs open around 9a.m in Portree, so don’t plan early shopping. We wanted to visit the Aros Visitor Centre at the start of our day, but we were quite dissapointed : the centre seems not to host any exhibition anymore. Whether it is temporary or permanent, we don’t know…

Between the Aros centre and the road going to Peinchoran, our map indicates a little path following the Loch Portree but the path doesn’t seem to exist anymore.

You can find water in a lot of little streams on the last part of the route, when following the coast towards Sligachan. We drank it and we aren’t sick, so let’s say it’s drinkable.

The end of that route, juste before arriving to Sligachan while following the coast, is a bit tricky, especially if it just rained: there are a lot of streams, the soil is peaty nearly everywhere, and the path splits into several little trails. No risk of getting lost, but good chances of ending the day with wet shoes.

Sligachan : a small campsite, a luxurious hotel and a brewery, that’s all. You won’t find any shop here. It’s even hard to do wild camping, the only acceptable spot is a little patch of grass between the road, a path and two rivers. 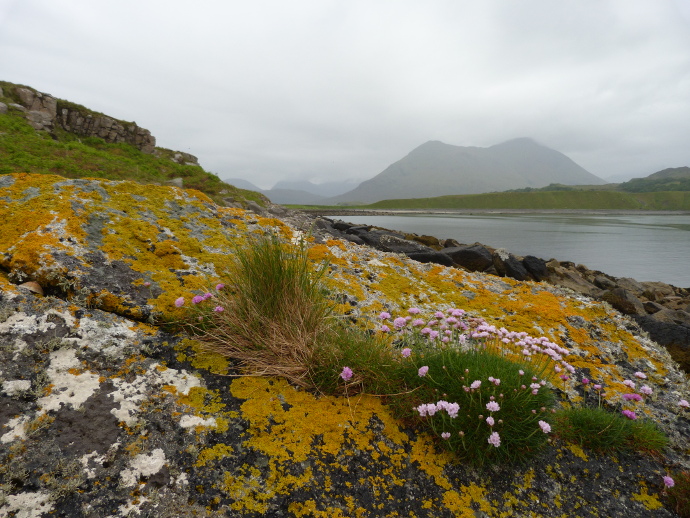 On the little peninsula of Gedintailor

If it rains, the path is flooded, making it really difficult to keep your feet dry.

There are plenty of streams to fill your bottles along the path.

There is an open bunkhouse with some space to sleep where the path meets the sea at Camasunary. It’s a huge relief to find it after three hours of walking under a cold rain and wind, trust us.

In Elgol you will find the public WC (with hot water!) and the shop right on the path. The latter is open Monday-Saturday 10a.m-5p.m. and can provide you with pasta, rice, cheese, butter, sandwiches, scones, some fruit juice and all sorts of biscuits (even some home-made delicacies). However, you will find very few vegetables and fruits, and not much bread. They accept credit cards. There are not many streams in which you can fill your bottle, so plan ahead.

Boreraig is a dream place for wild camping : plenty of flat ground with soft grass, drinkable water, old stone walls to shelter from the wind, an amazing view, and even some places to lit a fire (with enough driftwood on the beach). And a great place to see some wildlife in the evening ! There is no space to set up a tent in Broadford. We eventually found a place while following a little path by the seashore, 1 mile (1.6km) north of the city centre, and it was a tiny patch of grass with some big uncomfortables rocks. We had a great view though. Our last campsite, north of Broadford

Seals : We saw a few seals at three different places along our trip. The first was on the coast below the Loch Leathan, just a little south of the Old Man of Storr (Day 1). The second was on a little island off Upper Ollach, halfway between Portree and Sligachan (Day 2). The third was on another little island, off a beach south of Torrin (Day 4). They were always quite far and we wouldn’t have seen them much without binoculars.

Otter : We were enjoying the sunset on the rocky coast of Boreraig (end of Day 4) when an otter came swimming along the coast, looking for a meal in the seaweed. The tide was low so it had to go out of the water sometimes and we saw it very well.

Golden plover : There were several of them calling and probably nesting in the Trotternish Ridge, north of Portree. Golden eagle : We saw a golden eagle flying just above us in the Trotternish Ridge (Day 1), which seemed to wonder what we were doing in its realm. On Day 3 we saw another one, just a few miles south of Sligachan. Sea eagle : While eating our lunch at Boreraig (end of Day 4) we suddenly saw a swarm of seabirds flying off a little island facing us : a sea eagle was trying to catch something on the island and they didn’t like it. For several minutes they chased the eagle, who finally decided to leave, flying east in direction of the coast. After half an hour, it came again ; that time it managed to catch whatever it came for, before flying away.

Great skua : Incredible scene : a great skua assaulting, drowning, plucking and eating a grey heron in the sea off Broadford (end of Day 5).

Congratulation, you have reached the end of this report ! We hope that you found some interesting information that can help you while planning your own trip.
Never stop hiking !

Théo & Lucas Michelot (France)
Click to mark this as a great report. Register or Login free to be able to rate and comment on reports (as well as access 1:25000 mapping).