This was my first trip away with the Aberdeen YMCA. The guys were great fun and super experienced so it made for a comfortable trip. We arrived at Ben Nevis youth hostel about 2200 on the Friday, had a few beers then retired to bed.

Trip began from the layby as the route instructs. As stressed in every report of this walk, take a damn bike if you can. Its a long walk in/ out with not really much to look at. The mist was low as forecast but due to brighten up in the afternoon. SW face of Gulvain on which you scale

Again as documented, the climb is pretty steep. The path zig-zags up the hill and becomes tedious quite quickly. The views behind back into the glen are bonny, when the mist isnt there. We made good time to the 855m point, I think it was two hours though I may be wrong. I was more interested in my pasta than the time. This was the snow level though it wasnt overly deep. It was icy though as I was to later succumb too. Up towards the trig point Looking back to 855m Big Ben still in the clouds

The sun began to break through which gave us about 10 minutes of actually seeing where we were going and there was some nice views to be had. So nice in fact that I stood around marvelling and let the group carry on. As I continued taking pictures by the trig point, the icy mist came back in and I found myself quite alone without seeing the exact direction the guys went. I knew it was downhill but I couldnt see their footprints so I proceeded with caution. Axe oot, I began descending the 50 or so metres which takes you onto the final ridge of the walk. In fine conditions it would be easy to roll down but the ice made life difficult and of course I slipped after a few steps. This was my first fall outwith a controlled environment and admittedly I did feel a bit scared. I dug the axe in, stopped and gathered my thoughts. I thought I could make out some footprints to my left so I began to edge towards them and as I did I fell again. No damage done though, just a bruised ego. The team were waiting another 100m away in the mist.

The ridge felt a wee bit intimidating with the snow on it and my previous slide but we made good time to the summit where we had tea and pictures.

We retraced the steps back and by the time we reached the trig point again, I think there was 30 mins between the two points, the sun was out, the Ben was out and it was a lovely day!

The descent was a ******* because of my sare knees so I enjoyed the walk out in peace as I let them go ahead. Actually thats a lie, I didnt enjoy it at all. I hate a walk out.

Gulvain is a bonny wee hill, but not one I wish to return to in a hurry. 7 hours in summer conditions should easily be broken. Towards true summit, at top of descent I fell down 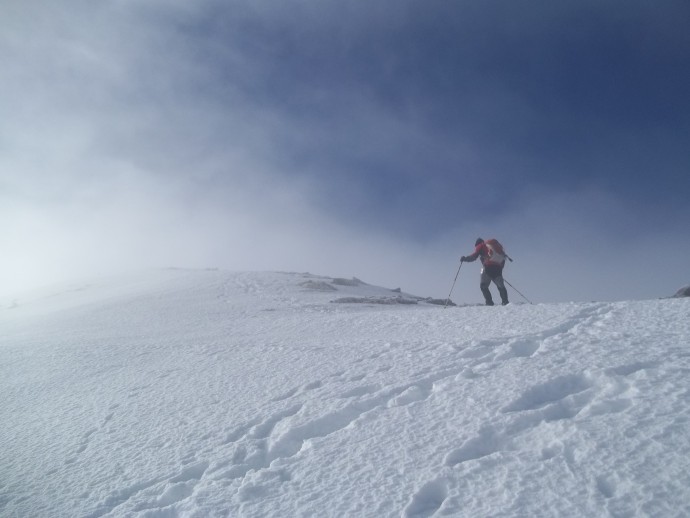