Ben_Macdui_1.gpx Open full screen  NB: Walkhighlands is not responsible for the accuracy of gpx files in users posts

After a poor summer the start of November saw some unusually settled days. With the weather forecast to break on Nov 04 we decided to opt for an ambitious route (for November), namely the 3 Munros in the 'Macdui horseshoe' starting from Linn of Dee. Given that we wanted to be off the hill and onto a good track by 1630h when the light fails an early start was essential and we were away from the car just after 0700h. On this trip we left the bikes at home as the distance to / from Derry Lodge is only just over 5k and, personally, I prefer to walk the track in the dark rather than cycle.

The day started out calm with a little mist and a slight grass frost. The sun rose as we proceeded along the Derry Road and the whole day turned out to be cloudless which really brought out the autumn colours. Unusually for November there was mostly very little wind apart from around the summit of Ben Macdui; on this basis dachstein mitts stayed in the pack and a very cheap pair of gloves bought from the local chemist sufficed! The benign conditions made it easy to use the iPhone instead of the camera for most of the pictures which was a bonus as I've found that the phone takes better pictures but is not really suitable for adverse conditions as touchscreens can't be operated wearing gloves whereas thin gloves are fine when using a camera. The other reason I now prefer the phone is that it's far better at positioning the location of the photos (even capturing the altitude where picture was taken and the orientation) whereas the GPS on the camera always seems to be an hour or two behind events which makes for lots of adjustments to make to the image files at a later date.

The going underfoot was ideal for the trip as, apart from a very few spots, the rocks were totally dry. Obviously carrying winter equipment was out of the question given that there was zero chance of encountering snow underfoot; our spare fleeces and cags also remained in the packs, rare indeed for November in this area! Our time was a bit slower than when we last tackled this route in 2012 due mainly to the superb conditions calling for frequent stops to admire the views and take lots of pics. Rather than add to the narrative I'll post a selection of the many pics taken below with brief comments against each.

En route to Luibeg Bridge (did not want wet feet so early in day); Carn a' Mhaim beyond

Autumn colours on slopes of Carn a' Mhaim 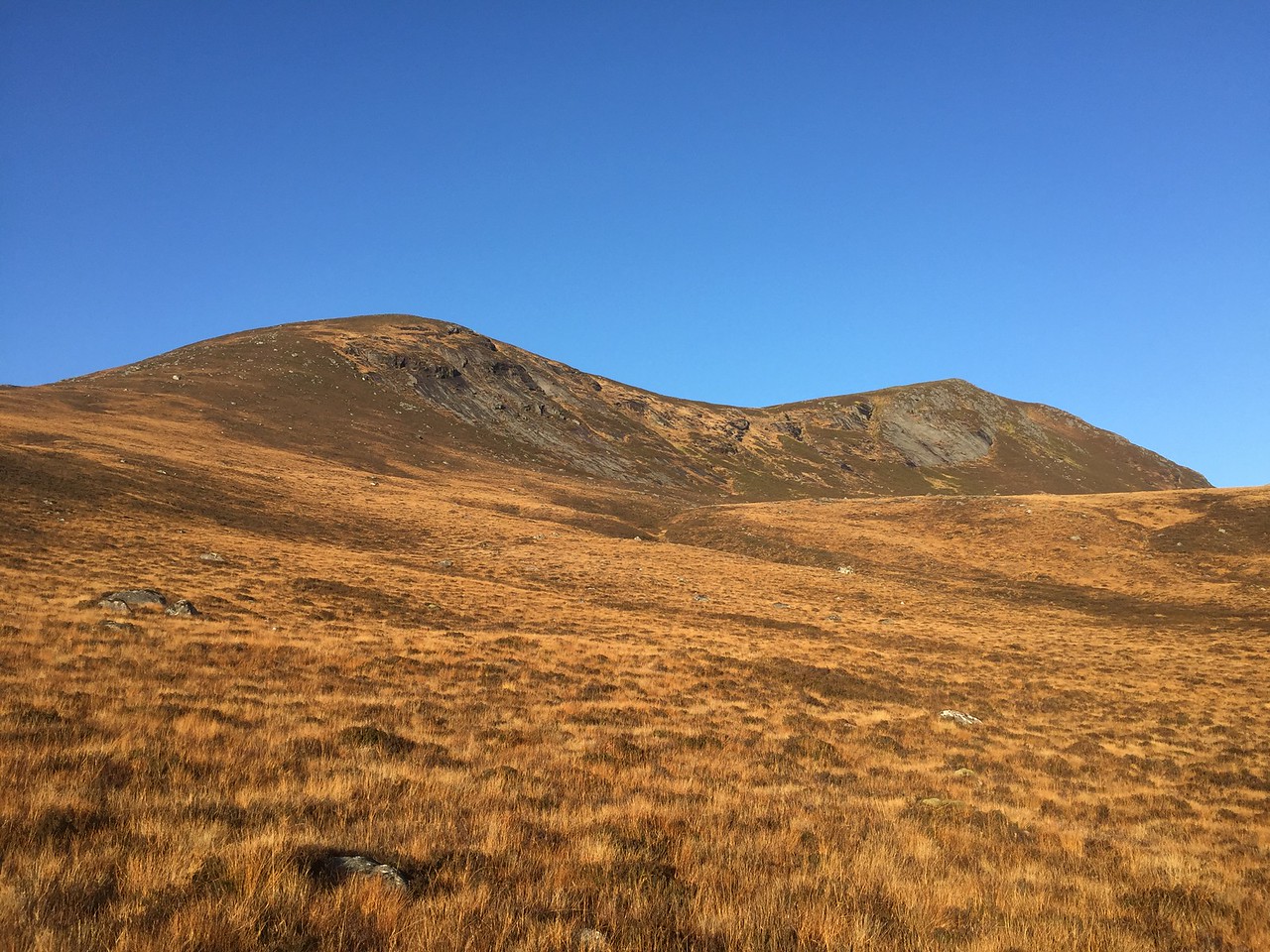 View to SW, Beinn a' Ghlo to left 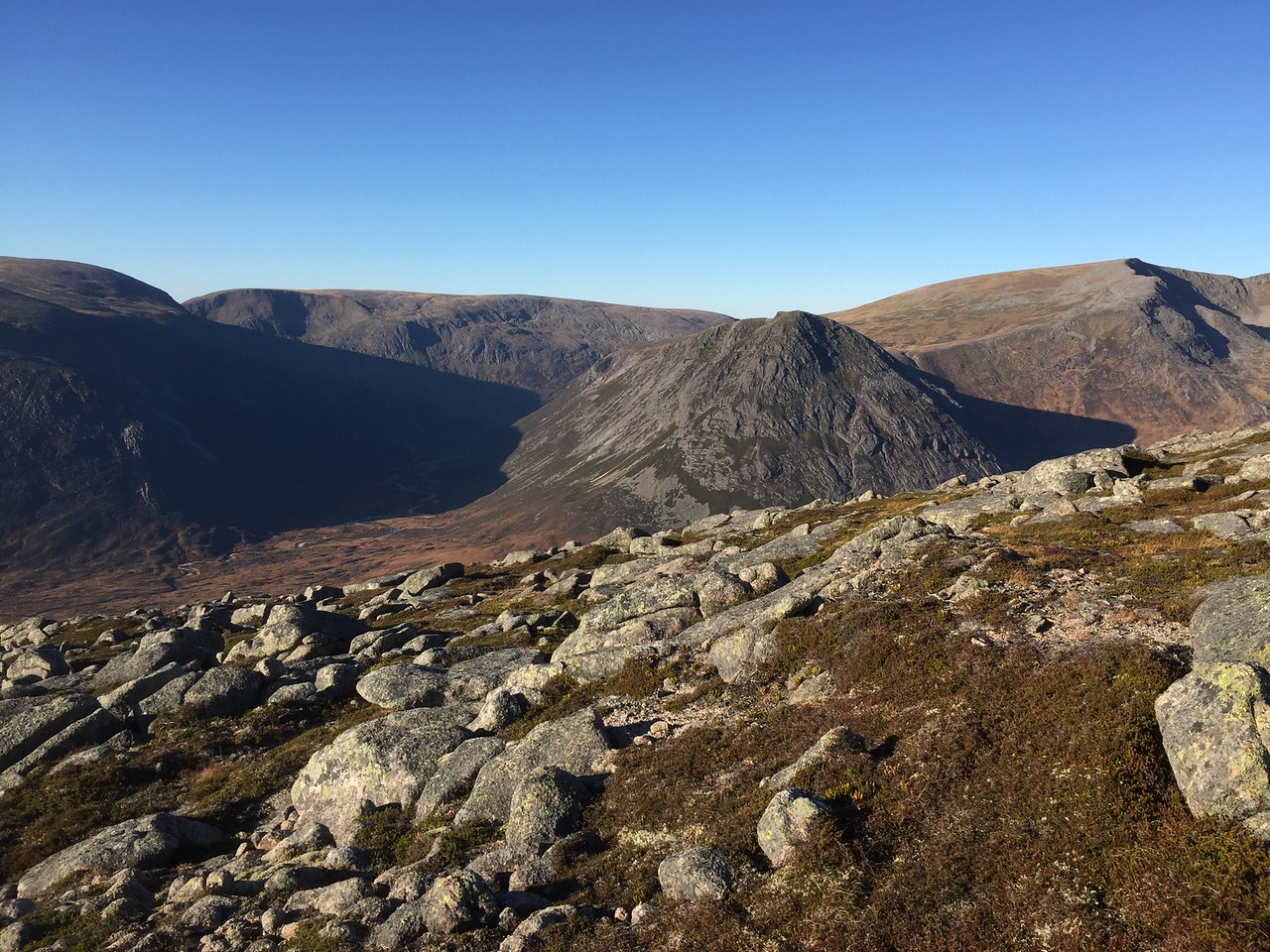 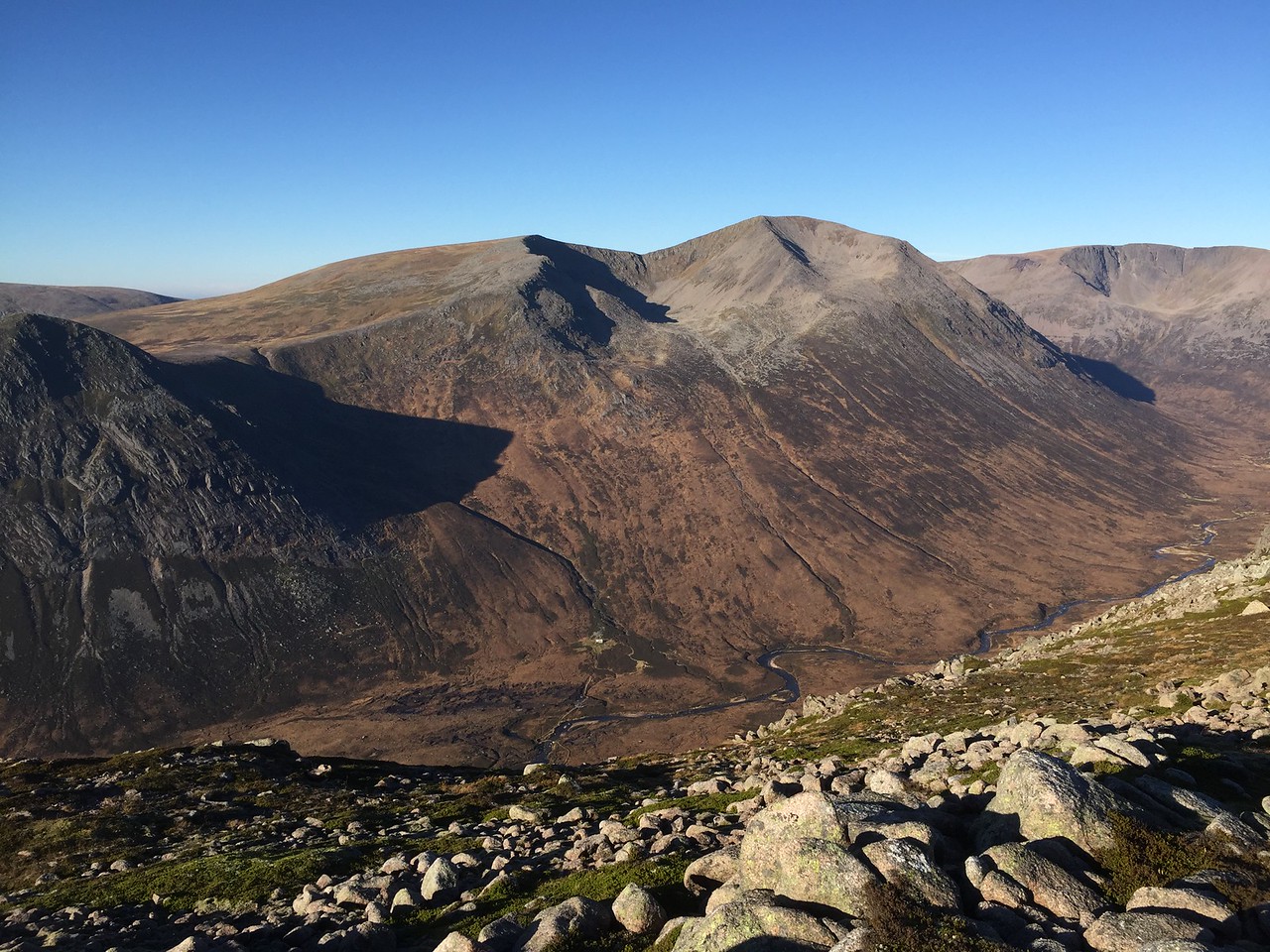 North ridge of Carn a' Mhaim, Ben Macdui to right

Another view of Devil's Point, Ben Bhrotain & Monadh Mòr beyond

View north up Lairig Ghru to Braeriach, slopes of Ben Macdui to right

Slopes of Ben Macdui displaying the extensive boulder fields (which we were soon to encounter). Water less plentiful than usual on col between Carn a' Mhaim and Ben Macdui thus short detour to right in order to fill bottles. 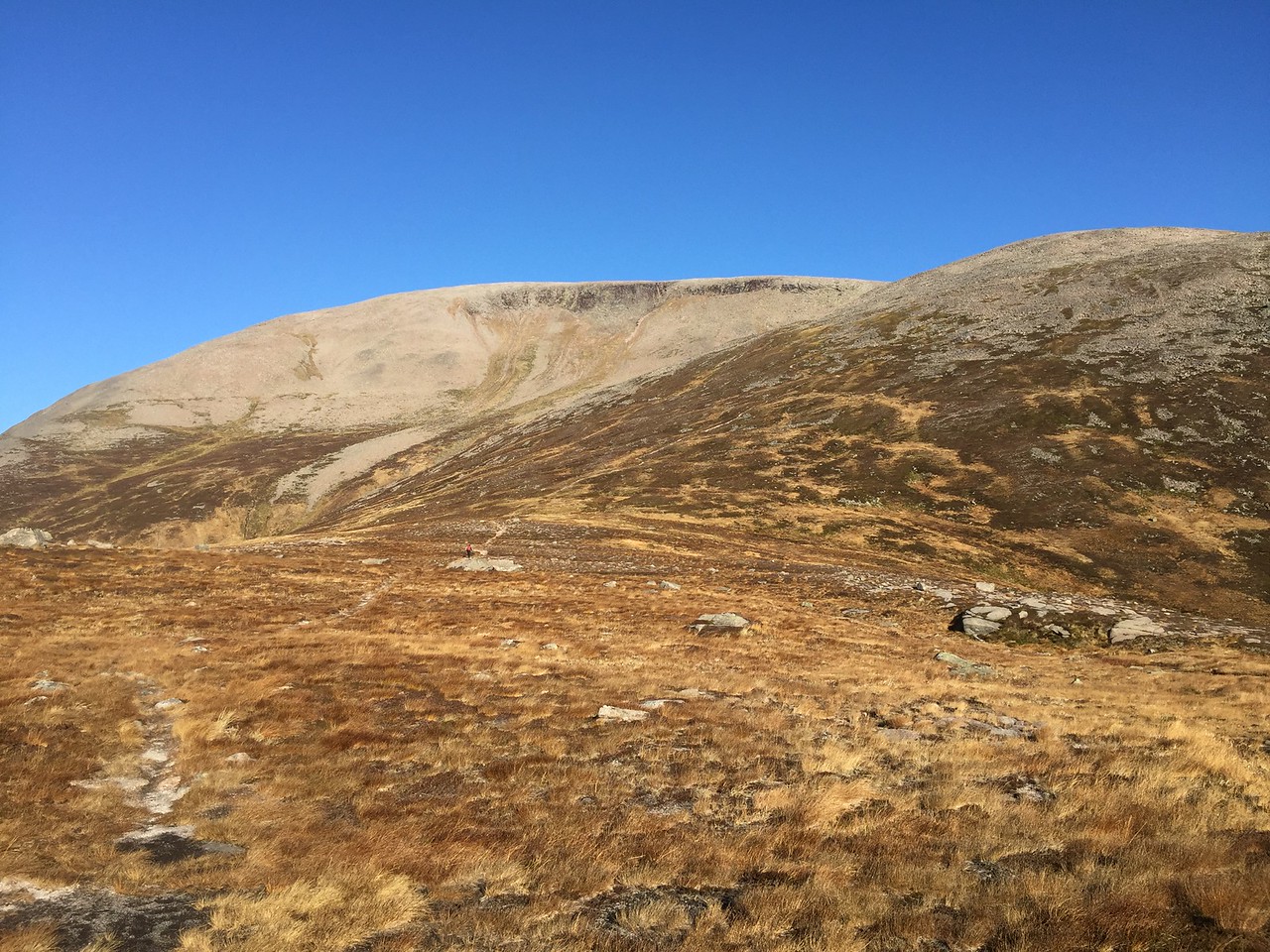 Ben Macdui viewfinder; only met around 6 others on summit (none of whom had started from Derry). 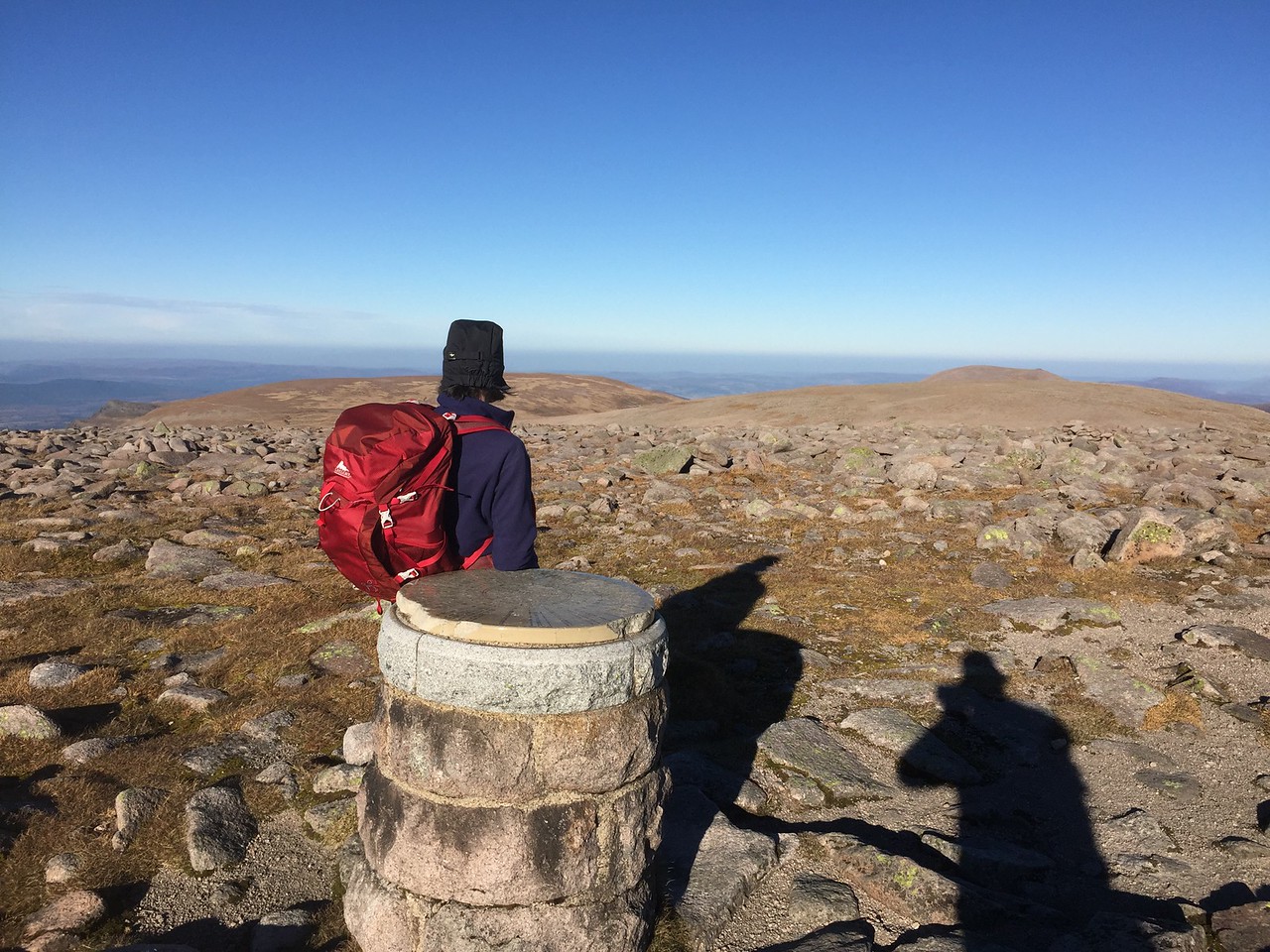 Looking at our next objective, Derry Cairngorm from top of Coire Sputan Dearg 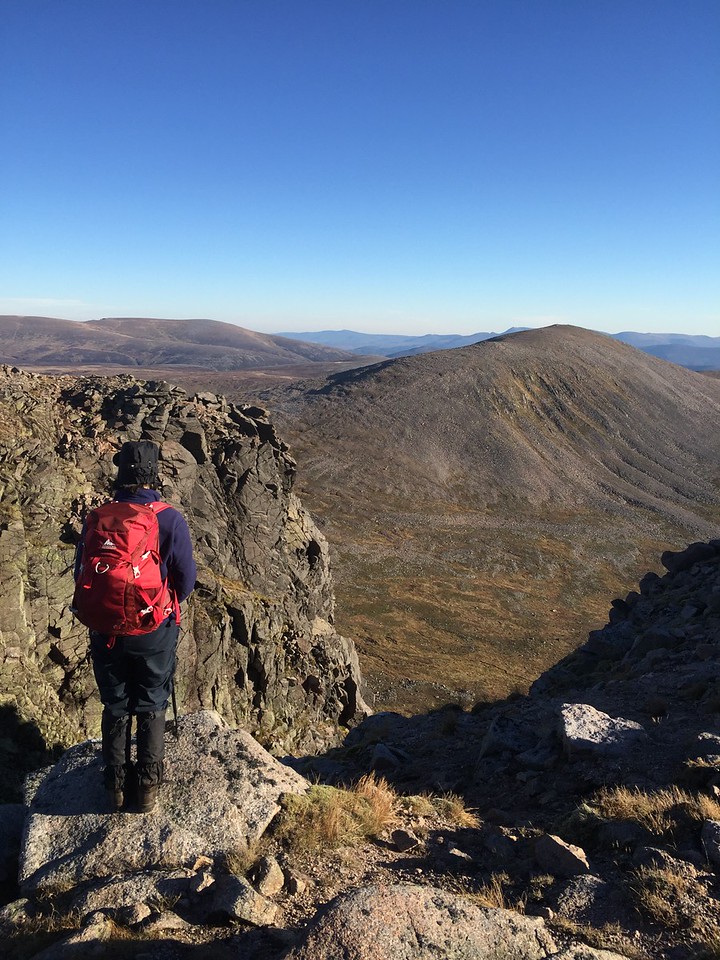 Autumn colours on col to west of Creagan a' Coire Etchachan

Looking back to Derry Cairngorm having descended the boulder fields which were more tedious than I remembered (having often done this descent when boulders well covered by snow). 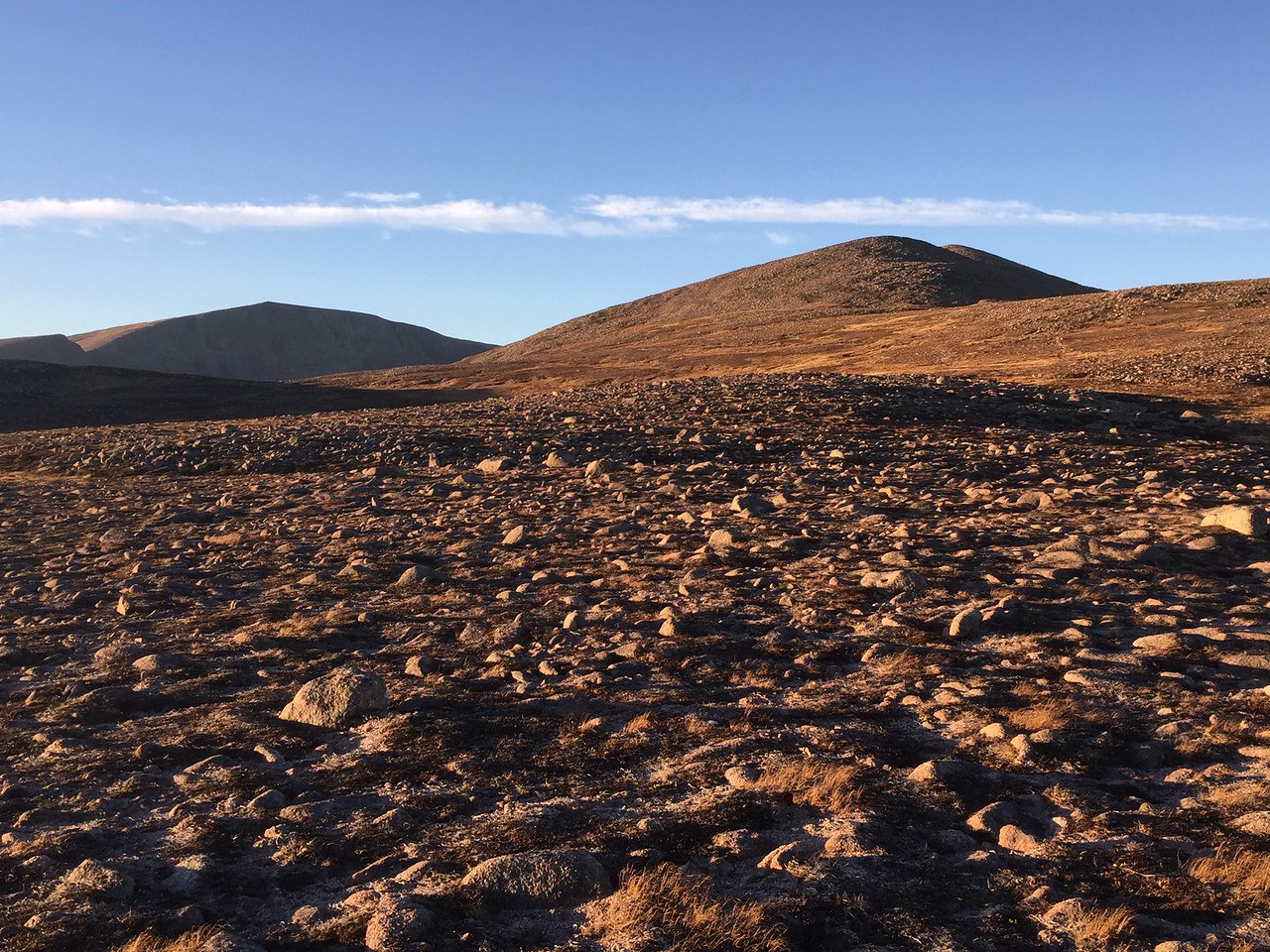 Descending Derry Cairngorm on what is mostly a good track, just above short section which requires care when wet due to greasy slabs.

Not lingering on descent as light soon fading; Lochnagar to SE.

Looking back up Glen Derry as last rays of sun strike the tops.

In summary one of our best ever days in the Scottish hills (and we've had lots).

First trip report hence somewhat of a 'learning curve' re producing and uploading a GPX file....especially as I don't have a GPS! [Edit 12-11-2015 - found that iPhone was, in fact, generating a GPX file and I've used it to update the route map which should now more accurately show actual route taken]. I've posted the process for producing a GPX (track log file) by Inverse Geotagging of photos in the 'Help - How to use the Site' forum. It's much easier to upload GPX track files created via a GPS or smartphone App but if you don't have this functionality at least there's a way of doing it using Geotagged photos.
Click to mark this as a great report. Register or Login free to be able to rate and comment on reports (as well as access 1:25000 mapping).

Sgurr Gaorsaic with Time to Linger