Fun in the snow at Lochan Meall an t-Suidhe

This walk was the culmination of our trip to the Fort William area. We had completed a very enjoyable (and long) walk from from Glenfinnan to Polloch along Loch Shiel the previous day, and decided that, weather permitting, we would try something with a bit of an incline. The sun came out in the morning and the weather report seemed quite encouraging for the first part of the day, so we decided to take a wee walk up Ben Nevis by the mountain track - with the intention of going halfway up and no more. We spoke to a few people who said the temperature above 800 metres was brutally cold (this was true even at 700 metres!), so the snow for a snowball fight was the aim. With hindsight, this goal should have been less robustly articulated at the very start of the climb: MacT Og subjected mummy and daddy to a two and a half hour 'are we at the snow yet' fest which 4 year olds seem to excel at Wee bit muddy and sludgy from the visitor centre over the bridge to the first stile. NIce and sunny start though. Start the ascent with the snow-capped Mamores in the distance.

MacT Og is delighted when we get to cross our first rocky bit - the waterfall and rocks are 'just like Tiso' MacT Og thinks. We all happily jump and climb the rocks on the Glenside ascent round the edge of Meall an t-Suidhe. My trusty boots (I have lost count how many walks they have been on) now choose this time to give up their time-honoured water resistance. They may fit like slippers and grip like suckers to wet rocks, but, unfortunately not even another resoling will save them this time (major structural malfunction). Anyway, a wee wet foot was not going to keep us from a good snowball fight. 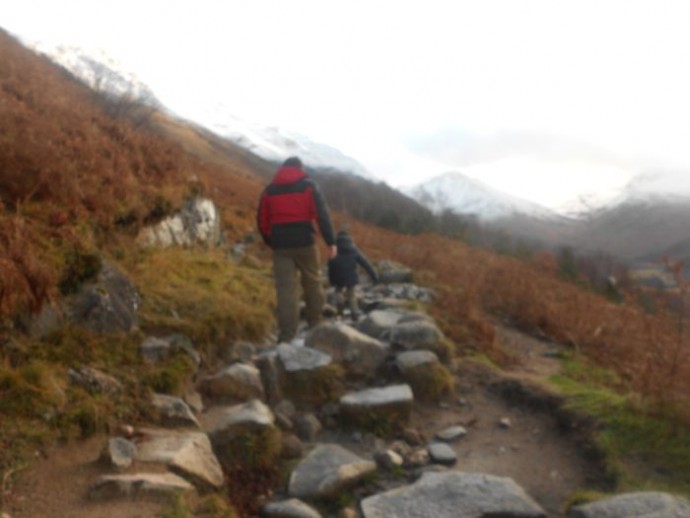 We finally turned the corner and started to climb up to the Lochan. The temperature drop between the turn and the Lochan was quite remarkable. At the top of the second turn the snow began to cover the tracks and heather. Within half an hour of the turn we were in the deep stuff. MacT Og was thrilled. We had to stop there and then and commence our first snowball fight. As MacT Og was losing the snowball fight, he decided that manoeuvrability was the issue and asked if he could take some of his several layers off. Poor wee guy was so wrapped up he could hardly move. But we had to remind him that it was really really cold. And as if on cue a couple of walkers, looking very weather beaten descended to where we were. One of them had had his nose split by the searing cold further up (minus 15 and the wind raking the ice and snow across his face). I also took my camera out for a photo and made the mistake of taking my glove off. The cold was pretty intense and within a few seconds of exposure I could really feel the pain. Nanook of the North

We all had a wee muck about in the snow for another few minutes, before realising that it was getting a wee bit too cold. The icy haze hanging at 800-900 meters was moving down so we thought it best to make a sharp exit. Mummy MacT with the descending fogeeze behind her So we then made our way back down the hill. The views of the surrounding mountains were great. Once back down we enjoyed a few corned beef sandwiches - mmm, lovely (always taste amazing after a big walk)


Back in Scotia and up Tinto