Route: The Ring of Steall, Mamores

Before I'll come to the actual report it needs to be mentioned that two years earlier I had totally failed on the Mamores circuit: Being not careless but a novice, I kept on walking even though visibility was really poor when I got as far as the bealach just underneath Sgurr an Iubhair. Nothing much to be seen. That's me in the mist unaware of what was to come.

Probably somewhere near Stob Coire a' Chairn I unknowingly left and completely lost the faint footpath and suddenly found myself in the middle of nowhere, not knowing where I was, where I had come from and where I should go. Surrounded by clouds (or mist? who cares? same effect!) I slid down the steep mountainside grabbing and holding on to heather with each step to avoid falling over on the wet, grassy rocks. All I could cling to was the heather and the brilliant plan that I must descent to get out of mist and trouble. I must admit I was worried, but finally the mist cleared up a little and I could make out a small stream, finally leading me down to... The friendly and caring staff at the hotel supplied me with a few half-pints of a variety of Scottish beer and by taxi I went all the 25-mile-45-quid-way back to Lower Falls Car Park. Almost bankrupt, but alive!
So all's well that ends well.
Not well enough, though... determined to make up for the failure and a little wiser in terms of hiking in the Highlands I went back to challenge the Ring of Steall once more: 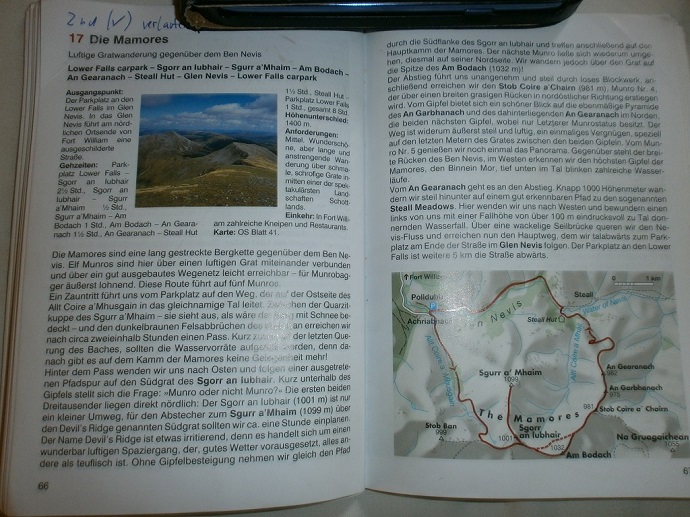 Would you believe it? The Mamores circuit in a German hiking guide.

Having taken the path through the coire between Sgurr a' Mhain and Stob Ban two years ago, as suggested by the guide, this time I wanted a different start (and, by the way, a different ending

) so I chose to take the route over the Devil's Ridge. No need to worry - no satanic Highlander, just a German, who's into heavy metal,
anticipating the Devil's Ridge, but showing no fear. Looking back: car park, Glen Nevis and Fort William in the distance. The going got steep. Not nice, but for once this actually looks steep even on a photo. Here we go again. Clouds and rain having a go at me as I reached the summit cairn of Sgurr a' Mhain. What have I done to deserve this? Ooops, the devilish pose on my way up...?! 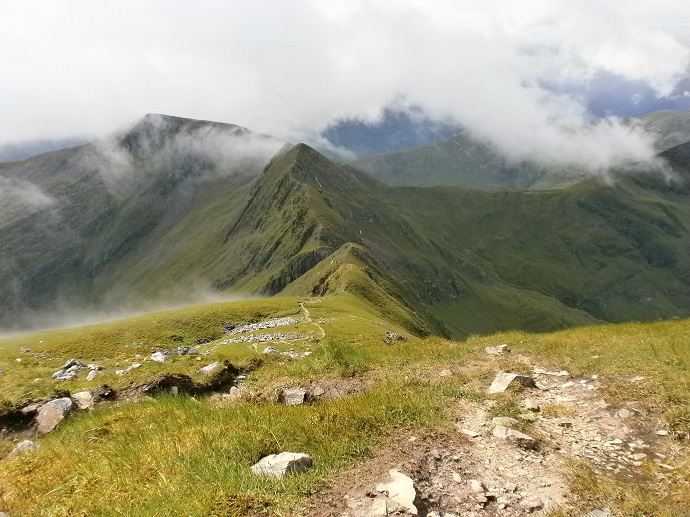 But after it had slowly cleared up, I could discern the Devil's Ridge, which neither seemed nor turned out to be too intimidating. Apart from one short scramble it's a marvellous, airy walk. Clouds looming over the summits ahead, and for the rest of the day the Scottish weather's variability remained steadfastly at my side, allowing me to “enjoy” a constant change of rain and sunshine. Well, it could have been worse. One should never forget that this is not Spain. Must be the Am Bodach cairn (correct me if I am wrong, sometimes I'm still not 100% sure where I am up there). 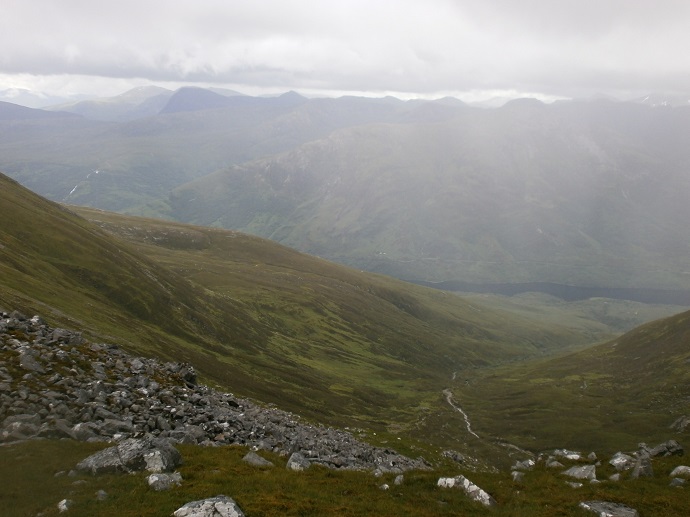 This is roughly where I had gone down “blind” two years earlier. Loch Leven on the right. View of the last two summits from Stob Coire a' Chairn. I only came across one walker on the whole track and when I spotted him from here, I thought we would possibly praise each other for being courageous enough to be out on such dangerous ground all by ourselves. To be honest, no drinks were served and no fireplace was lit and all we did was exchanging our “Hi ya!”s (one each) and going our ways. Nothing wrong about praising yourself anyway. From left to right: Sgurr an Iubhair, Devil's Ridge, Sgurr a' Mhain with some tiny spots of snow. 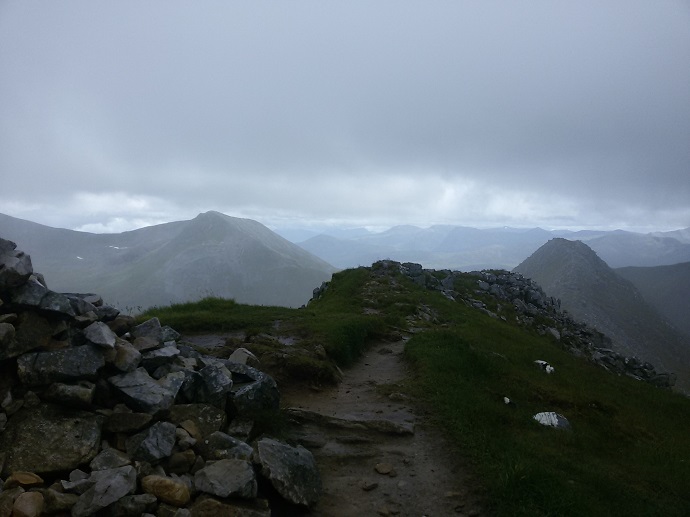 No more photos from here (An Gearanach) until I reached Steall Falls for a simple reason: For almost two hours during the 1000m descent rain was pouring down on me, which, combined with my knees' cries of pain despite the use of walking sticks, led to my yearning for taking photos being virtually erased. I only held my head up high in order to swear at the rain quite straightforwardly, which was of no use, though. Luckily, I knew that later I would basically remember the good parts of the hike, which I can confirm hereby. Made it! And maybe it was only me who heard thousands of beautiful, yellow flowers chanting “Welcome back on planet earth!”. Before mastering "the bridge”, I had to wade through a smaller stream. Doesn't matter when your feet/shoes are soaking wet anyway. The mysterious bog factor must have been 10 out of 5 at the time. By the way, if you don't swing, the bridge won't swing. I happily returned to the car park after ten exhausting hours, including approx. one hour of photographing. For any walker in Scotland the Ring of Steall is a must do. Pray (or maybe better watch out) for appropriate weather, though. Not because you might get wet (you will get dry some time or other), but because bad weather spoils the views on this circuit, which are magnificent - as is Scotland if you ask me. So see you soon!
Click to mark this as a great report. Register or Login free to be able to rate and comment on reports (as well as access 1:25000 mapping).