Patience is a virtue, but not a quality that I have. My previous munro that was ticked was at the start of September 2014. A couple of attempts had been organised and had fallen through due to poor weather. So I tried to match up days off with a weather window, which was wearing! I did arrange other short trips to try to keep some fitness, some of which were still very good fun!

So, I spied a high pressure for the weekend that could give me a choice of the Saturday or Sunday. That would give me my ideal of Bla Bheinn one day and something like Marsco/Glamaig/Belig or a mainland hill on the other day.

Thursday night came and it looked good for the Saturday but mixed on the Sunday....hey ho, lets do it. The kit/car was packed and off to work with the intention to head up after I was done. Then the inevitable happened, it all kicked off at work and I was held on for just under 5 (extra) hours. I was too tired at that point to travel up so I went home for a few hours sleep. I updated Scoob and Fi with the altered plan and set my alarm for 0245, joy!

Tiredness brought a sound sleep and off I went, trundling up the road, dodging several deer and owls, bizarre I know!

Sunrise came as I got to Skye and took a new turnoff. In 30 years of going to Skye, I've never been to Torrin/Elgol!

I spied the happy camping couple parked up opposite Bla Bheinn, I stopped got changed and took some picture of a fine hill on the Misty Isle. The forecast suggested the day would improve weatherwise!

Into the parking, which is a tad rough, suited and booted and off we went.

Off down to the road and up alongside the stream, the path is nice and easy and it wasn't cold, we soon had 3 red faces. The is a nice wee gorge/waterfall to look over up to Bla Bheinn and Clach Glas (which was the original plan 5 months ago). Clach Glas looks impressive and quite intimidating! 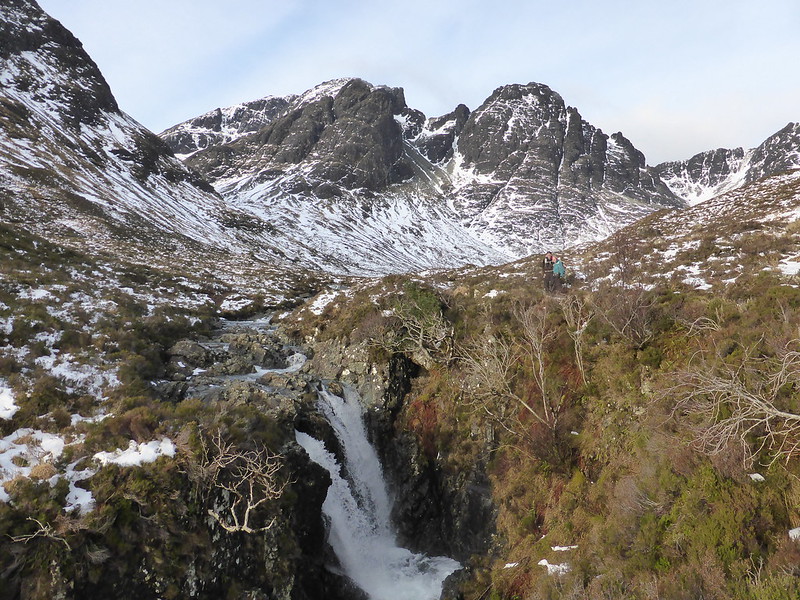 Up and over the stream and into the corrie, blue skies overhead. 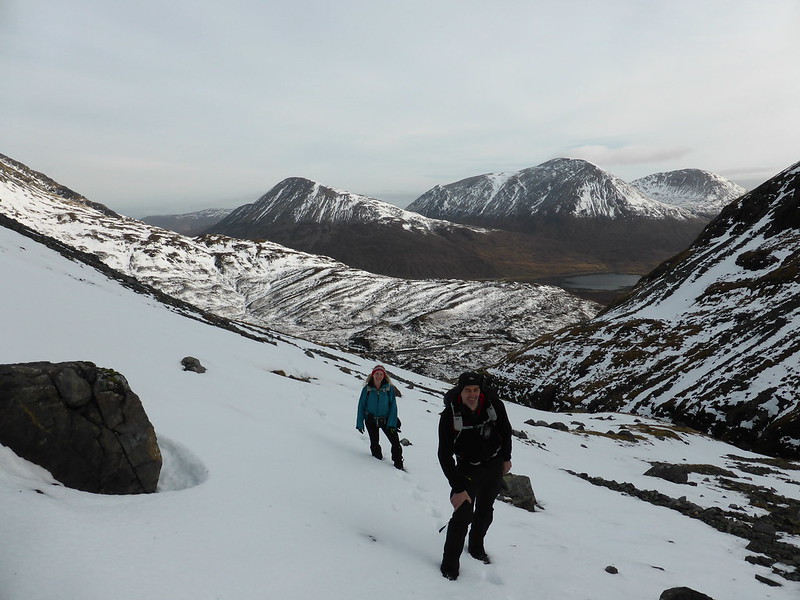 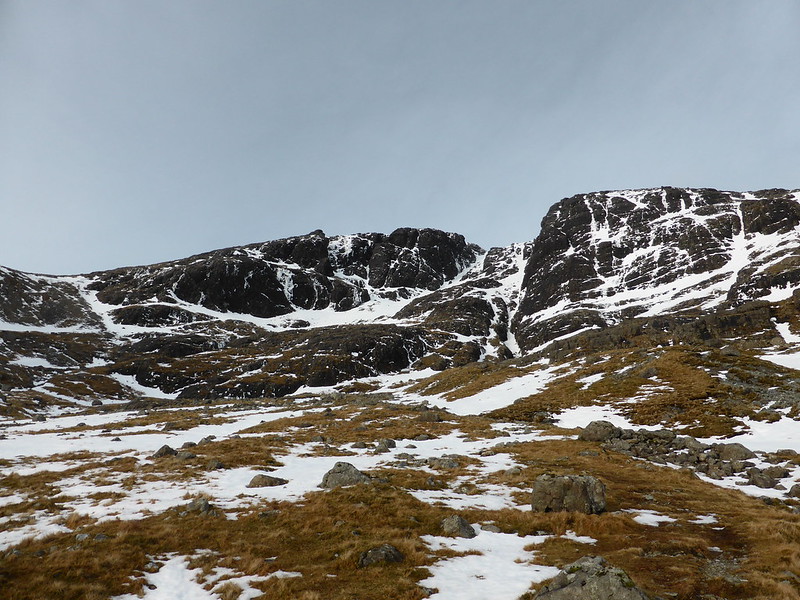 P1050370
Decision time. I was keen to do a circular route so we decided to go anticlockwise and catch the summit first then the other top. The going isn't too bad, some grass, some rock, some scree and some deep snow. Behind us there was a partial inversion towards what we believe is the hills of Knoydart. 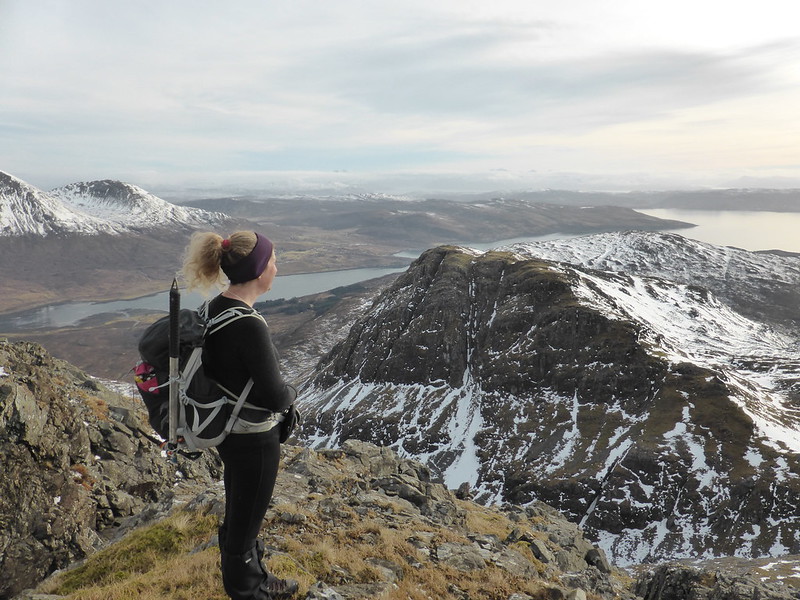 P1050389
Over the side of the should is a big drop back down to the corrie should you wish to investigate and get fine views of Clach Glas. Lots of pics were taken, some video and some fooling about which was taking time but we were in no rush as there was a final part to this masterplan, which will become clear later. 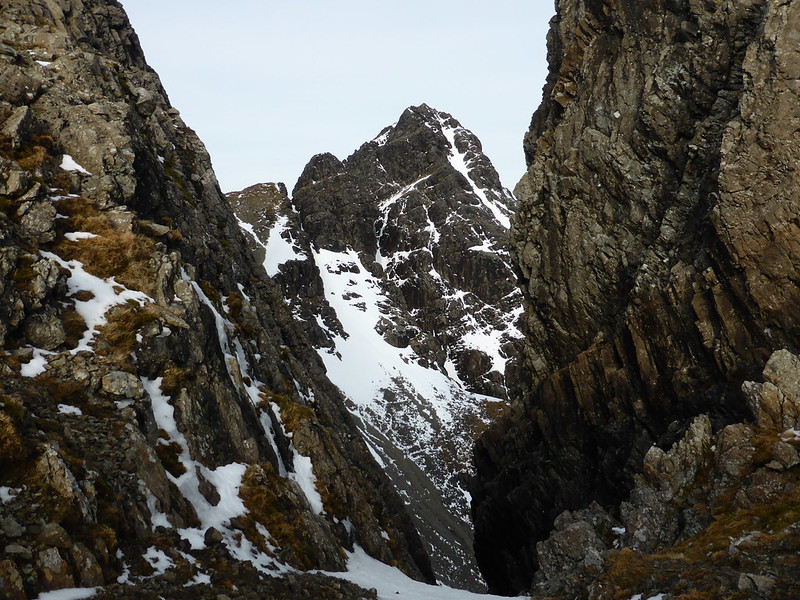 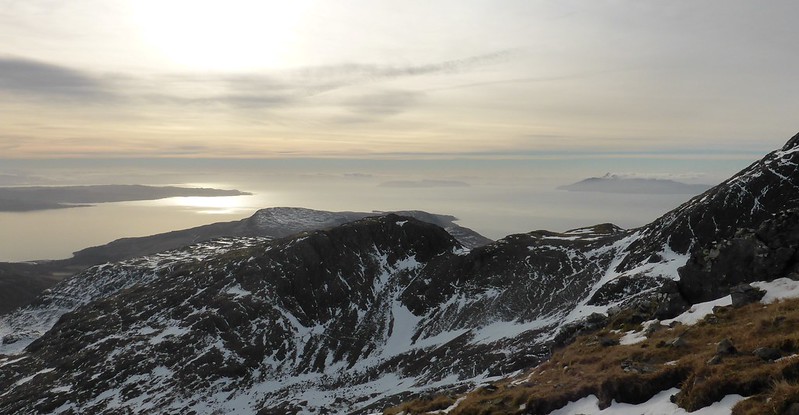 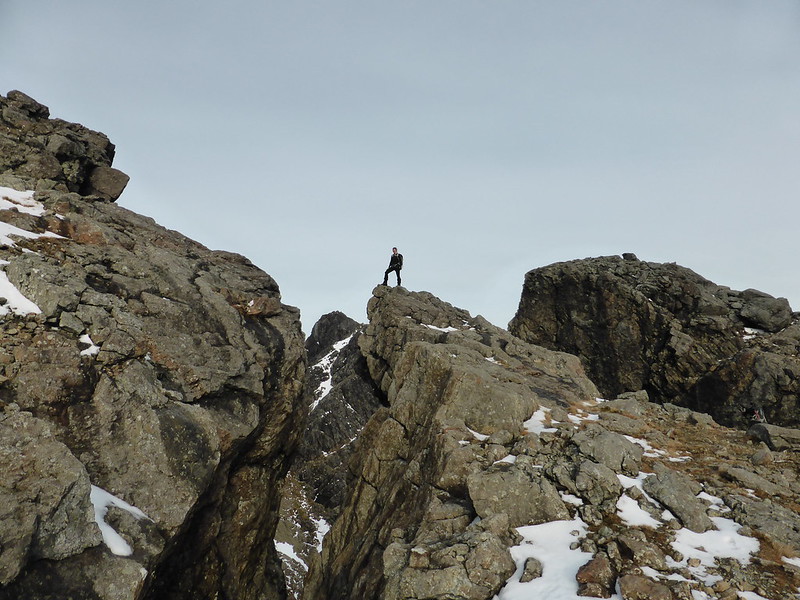 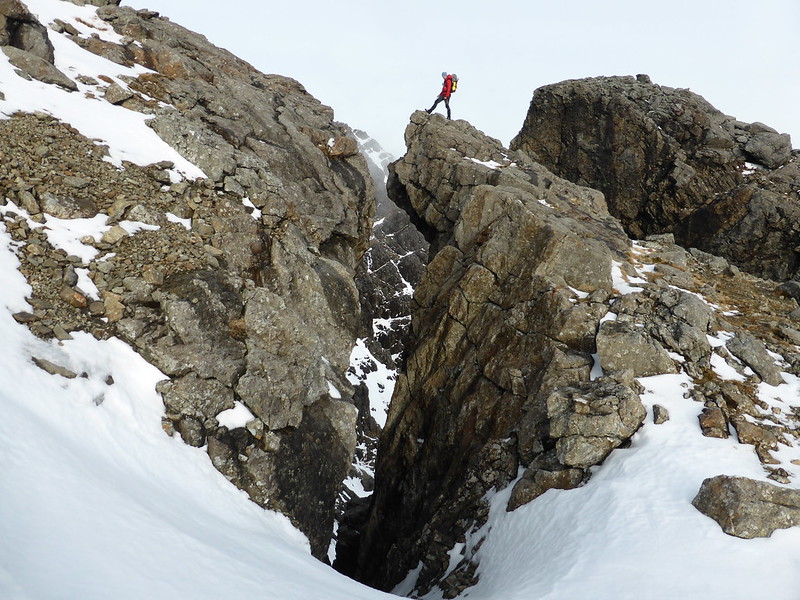 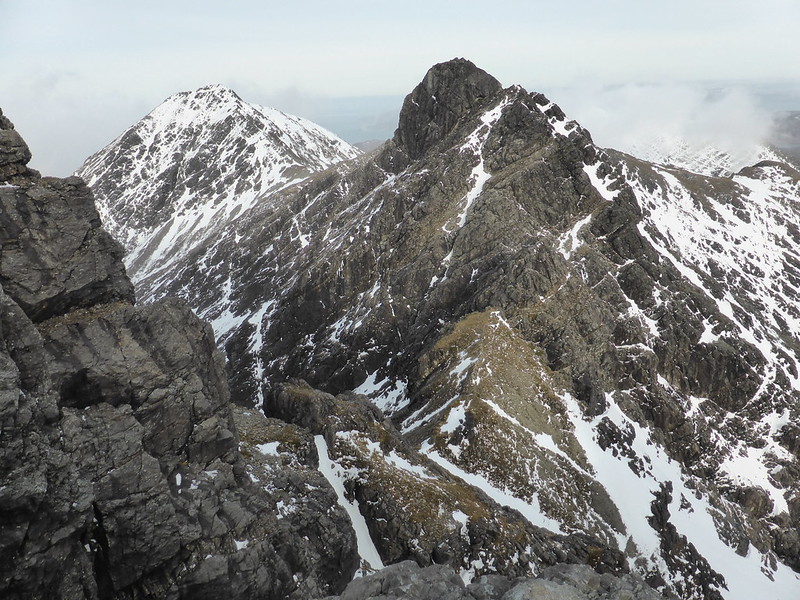 A wee icy patch and the axes came out just before a wee icy scramble and that was it, the summit plateau.

The trig and cairn were tagged and stood on. Some Talisker malt was consumed. Some pictures and videos were taken. Ok, a lot were taken! Scoob and Fi went to eat and I stood there snapping away. 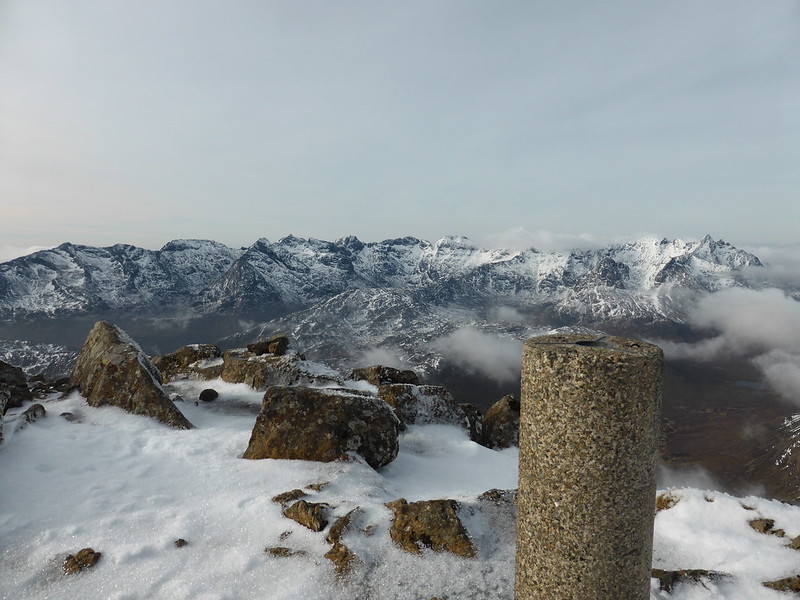 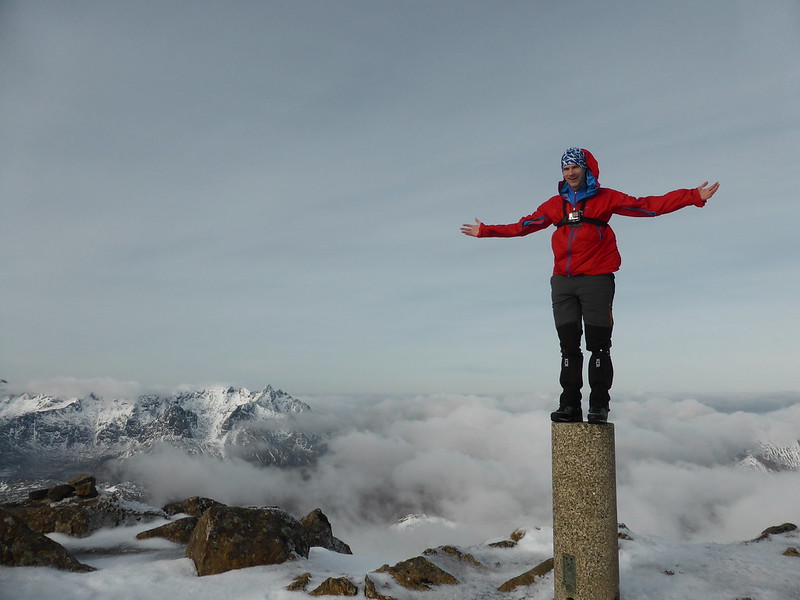 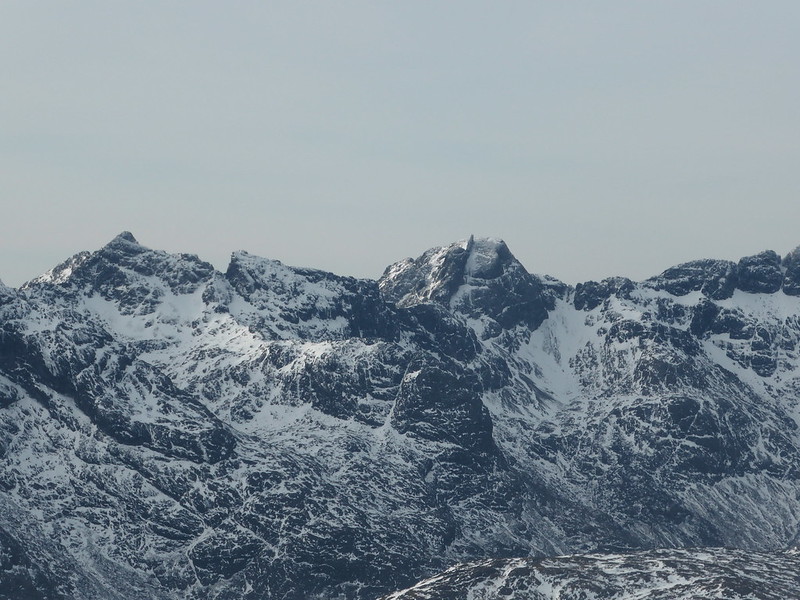 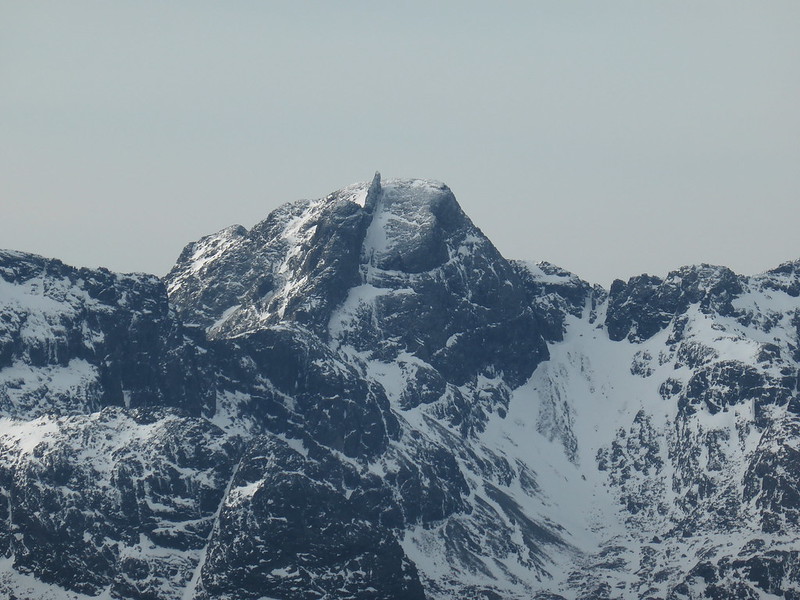 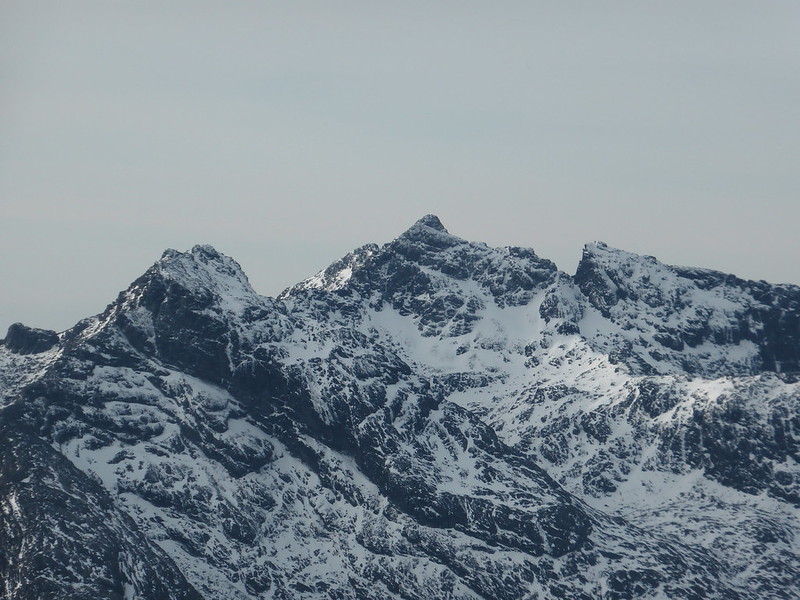 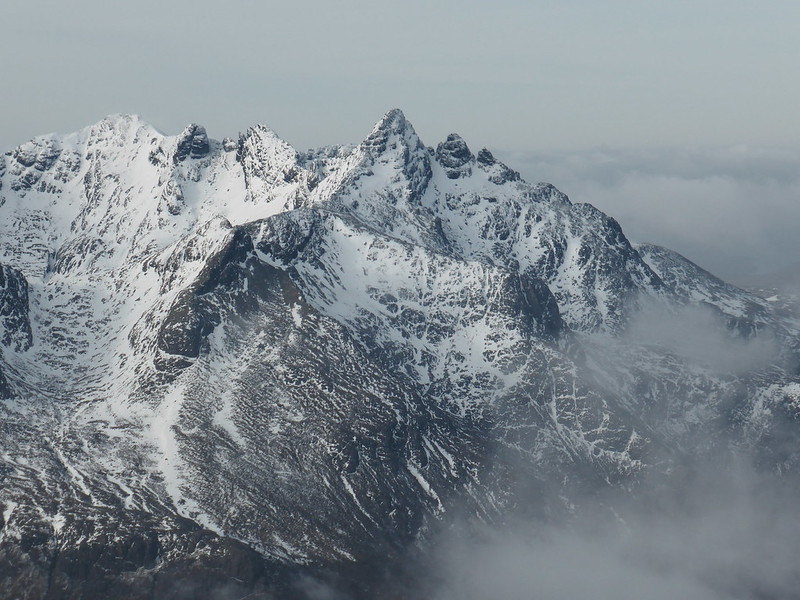 It was then time to pop over to the other top. I'd suggested a rope/harnesses etc as I suspected there would be a cornice but we decide against it. That may have been a mistake! haha. Scoob went first as I faffed with kit and took some pics, honest! 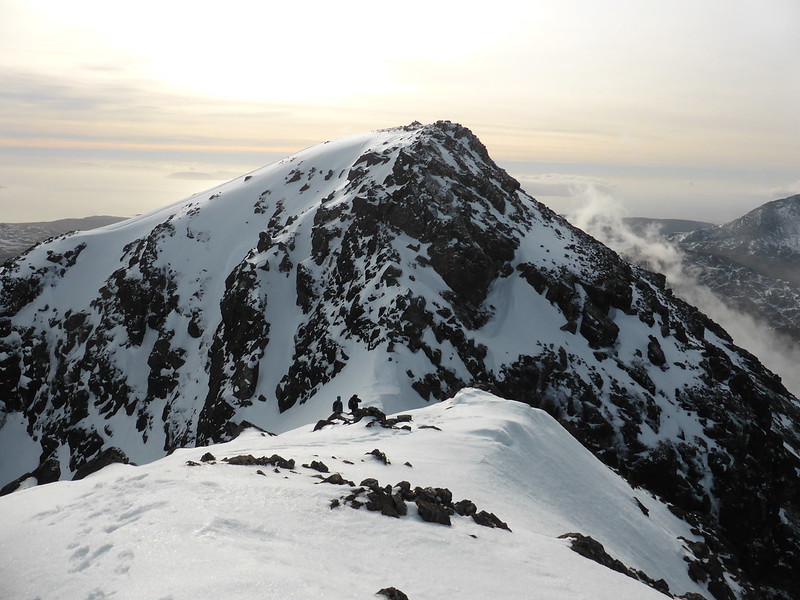 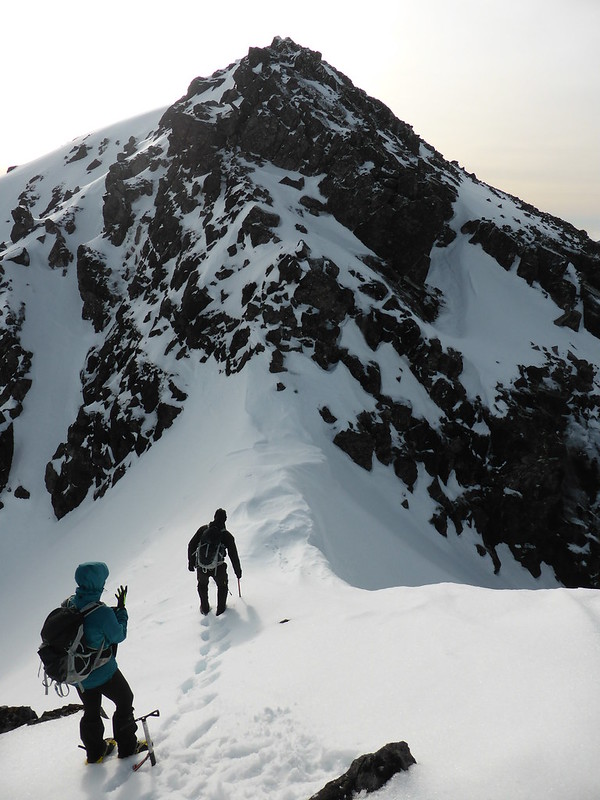 Anyhooooo, it was successfully negotiated as was the mixed scramble up the face and a wee tightrope walk and that was us at the southern top. 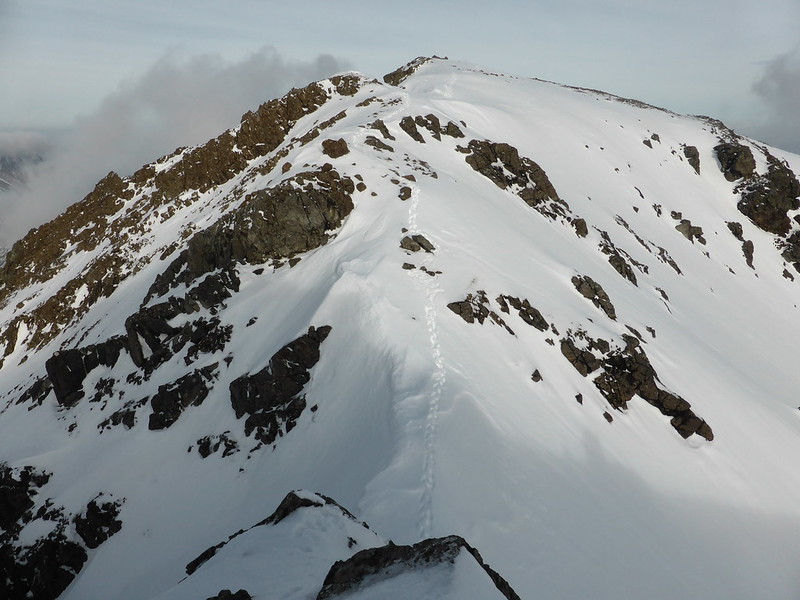 A wee bit of sight seeing and off we went down towards the corrie with Knoydart, Eigg and Rum looking pretty. 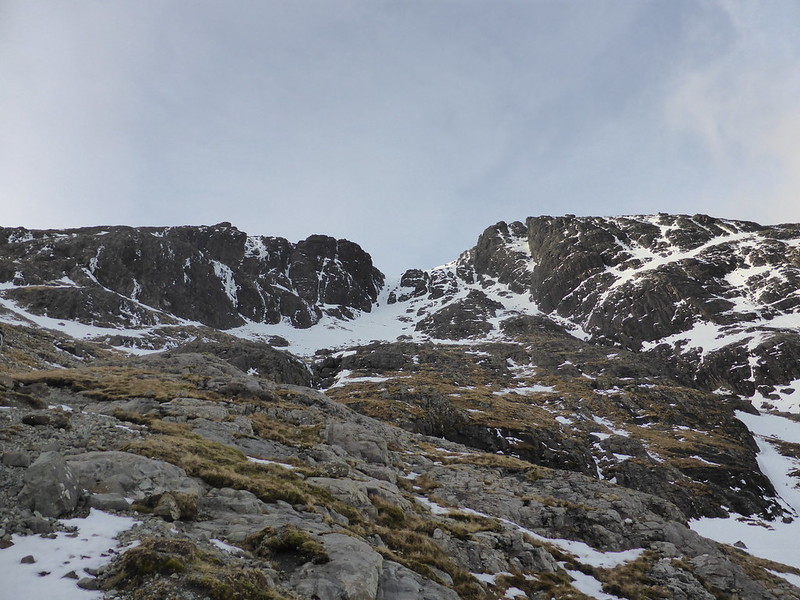 A sensed a bit of tension between Fi and Scoob....it was subtle! 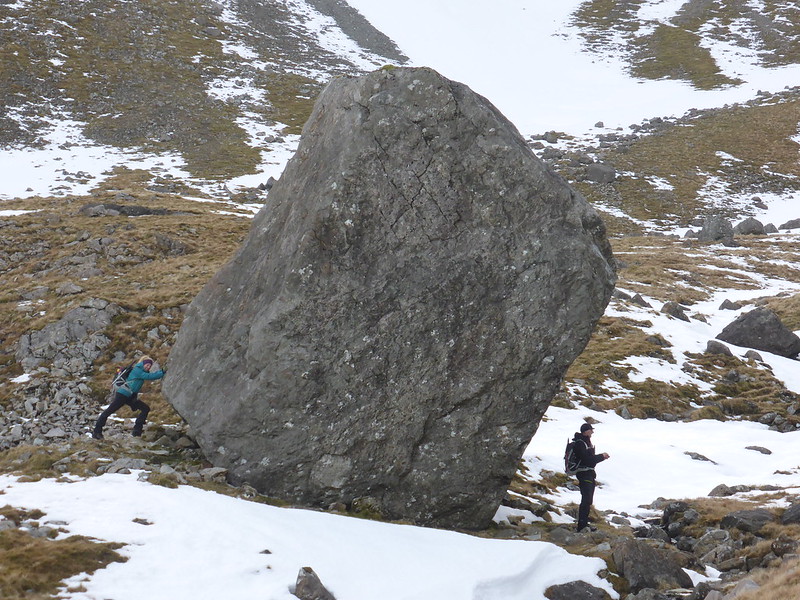 Back down in the corrie we retraced our steps and wandered down to the car. The return journey to the car complete.

P1050537
I popped back round the bay and took a couple more pictures before going to the final part of the plan I mentioned earlier. 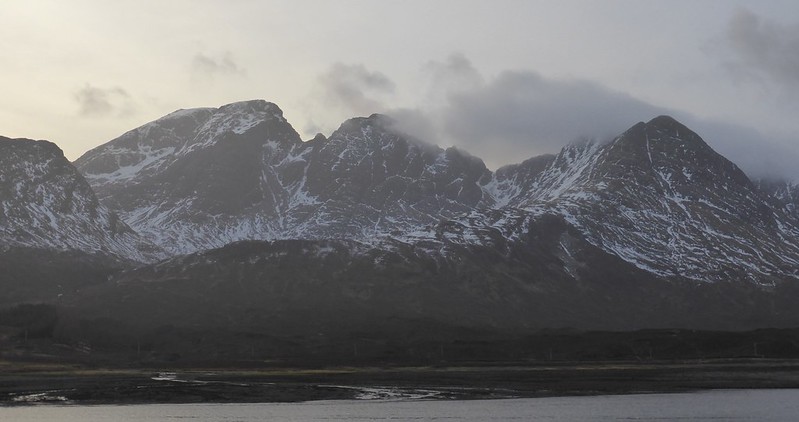 P1050542
I'd said to Scoob and Fi that I fancied catching the sunset at Elgol if they fancied it too, which they did.

This is what we saw when we got there... 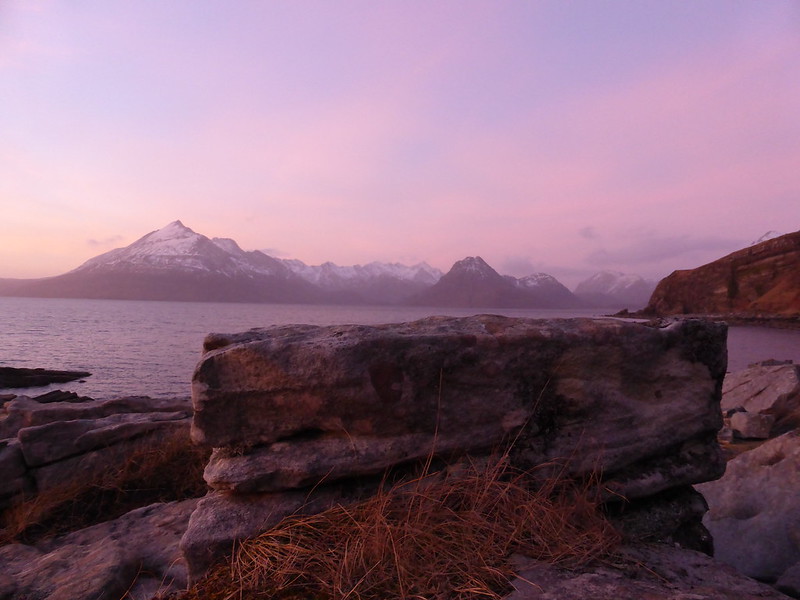 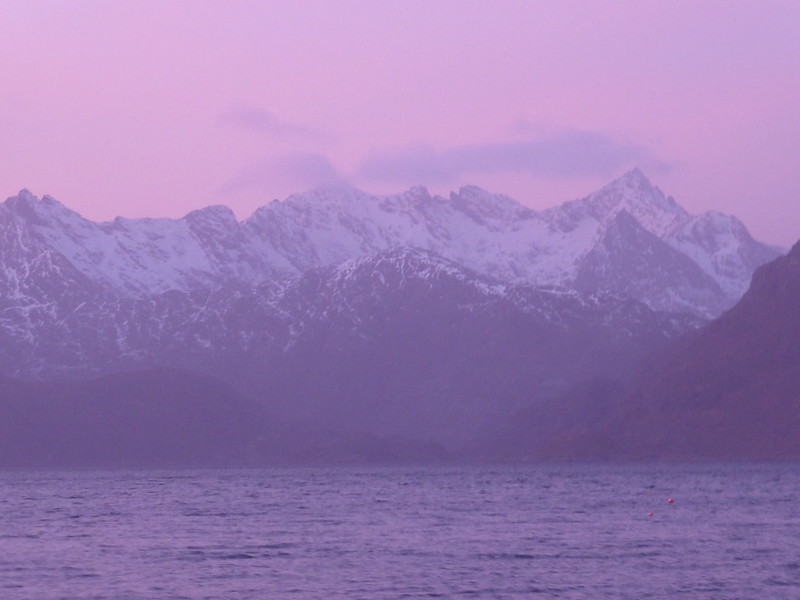 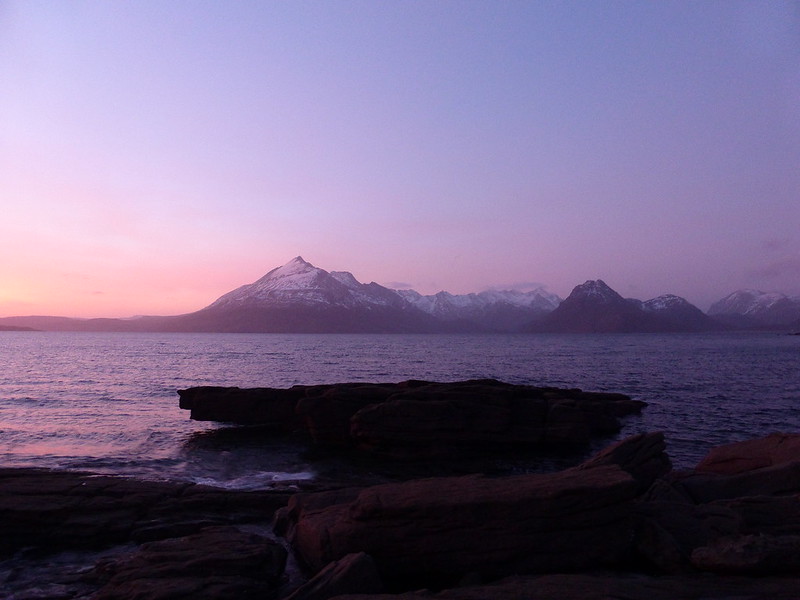 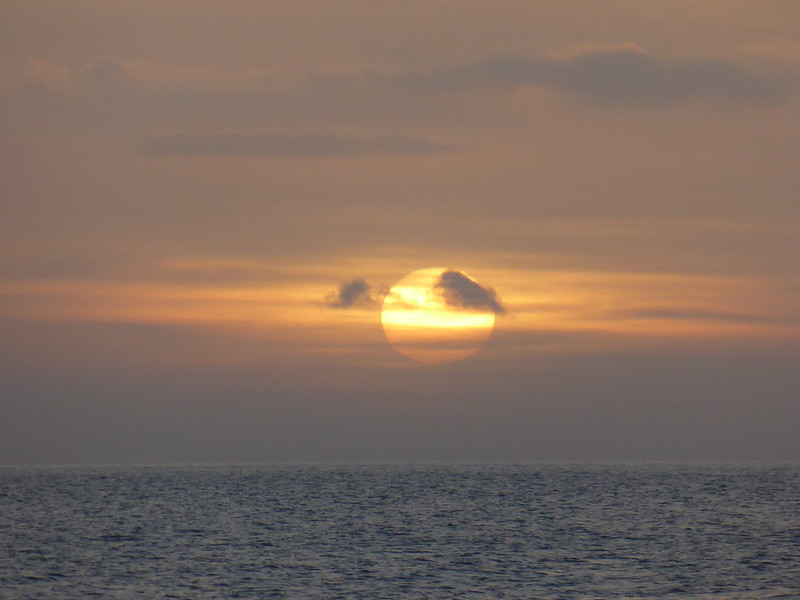 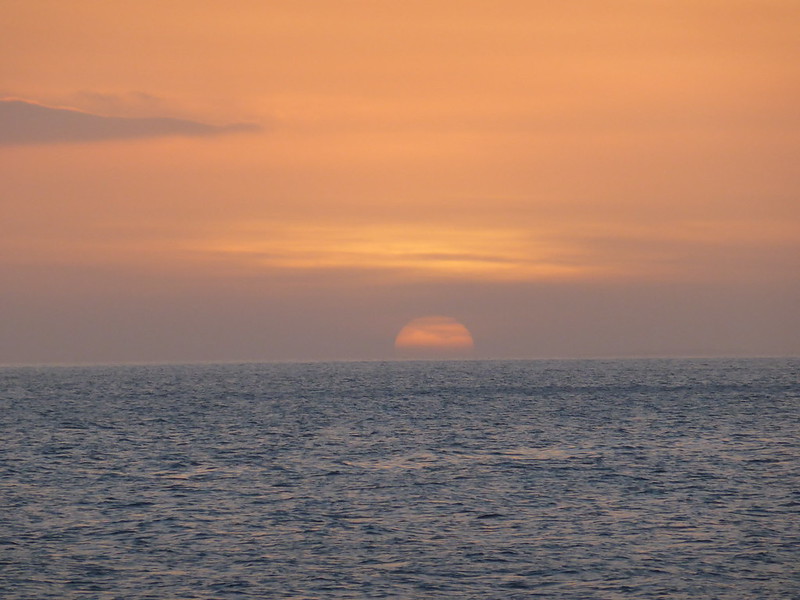 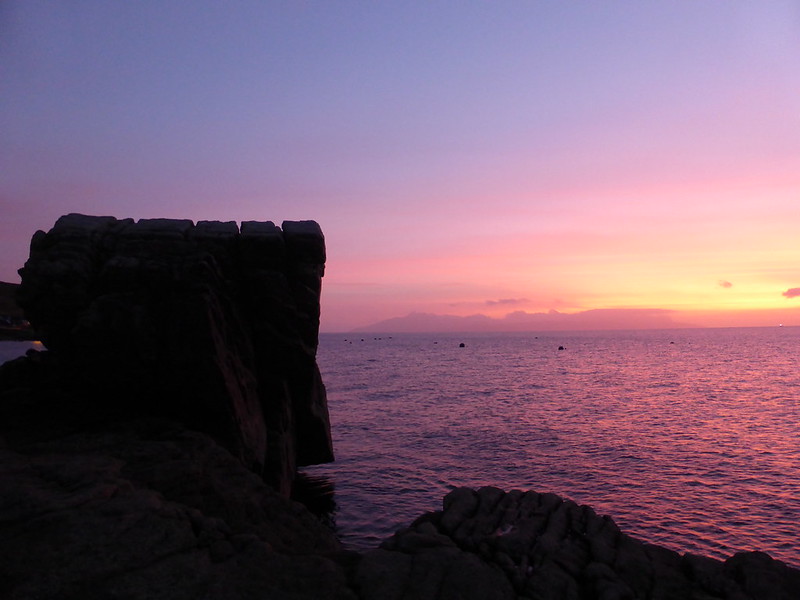 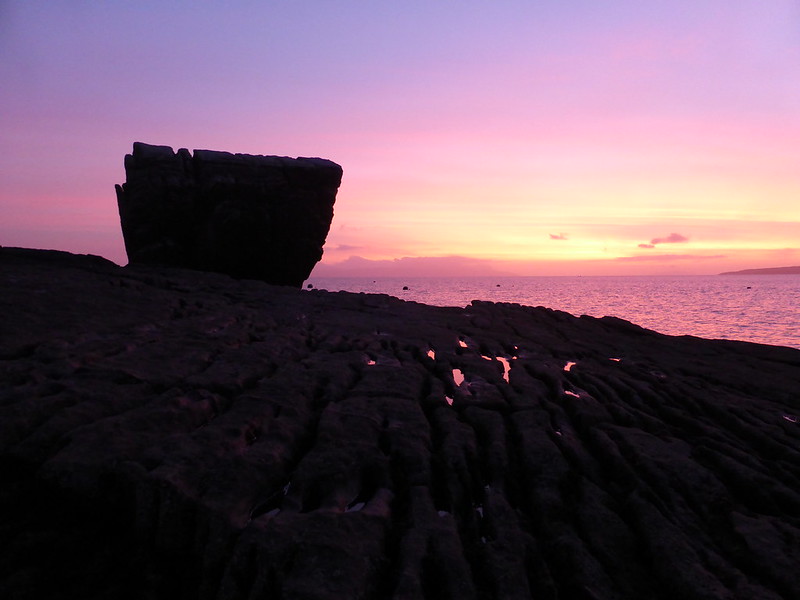 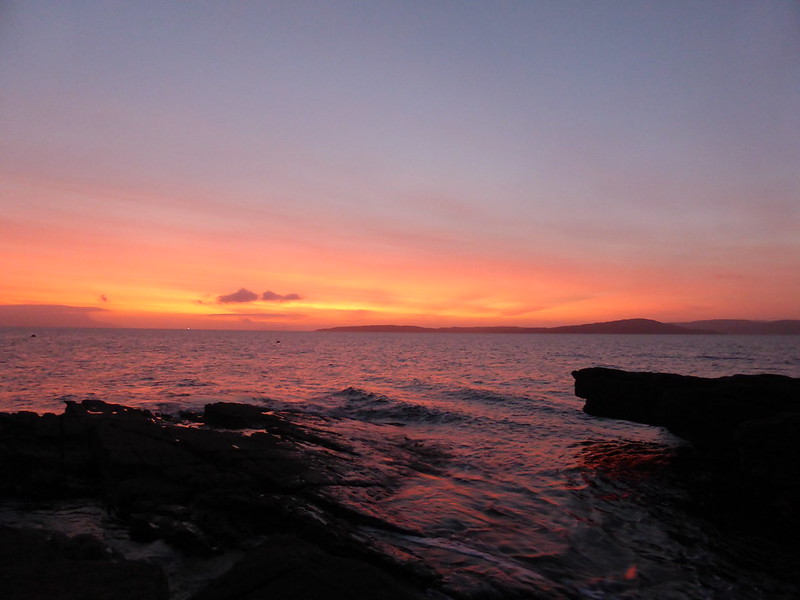 Bla Bheinn, the Cuillin from Elgol and a pretty sunset. A fine way to draw the day to a close and a good way to draw an end to round one of the munros (284 were in my SMC book).

Thanks to all that joined me on my adventure.

Edit to add Scoobs video!
Grab a cuppa and enjoy!
http://youtu.be/vXEg7CYNpT4
Click to mark this as a great report. Register or Login free to be able to rate and comment on reports (as well as access 1:25000 mapping).


Stuc a' Chroin via Beinn Each,100th munro for Del! Video too

The day old age hit me, but it was worth it. Quoich triple

An Socach to Carn Bhac

If you can't be good, be lucky!