I have often seen the mountains of Rum from the mainland, from Skye, from boats and ferries.
On a day off from gathering the Munros I had spent a day in Kinloch and toured it's remarkable crumbling 'castle' and seen it's Orchestrion. But my hill-going friend Mike and myself had not set foot on the fabled Rum Cuillin
Finally in July 2018 we were in Scotland again, and after a good day on Ben Resipol in Ardnamurchan we stayed overnight in Mallaig and were on the Small Isles Ferry early on Monday morning on an inner Hebridean cruise via Eigg to Rum.
The West Highlands, and the whole of Britain, were in the middle of a long hot summer, and the views were glorious from the CalMac boat. We had wondered about leaving for the hills straight off the boat and aim to get to Dibidil bothy by dark, but sense prevailed, and particularly when we saw the smart new bunkhouse near the jetty we were happy to book in and spend a day wandering around the small settlement of Kinloch.
Good news: it was so hot and dry there were NO midges!
Bad news : their place in the local eco-system had been taken by large biting horseflies: and we killed a few as they tried to get a meal from bare arms and legs. We ate in the cafe there, which is a kind of BYO as there is a shop next door which sells wine and beer, and enjoyed a good dinner. A group of geology students from Aberdeen were staying at the bunk-house , and seemed to be working hard surveying this geologically interesting island , with its ancient collapsed volcano. We would be seeing it close up next day, and we didnt stay up late..
Early the next morning the weather dawned fine as we aimed for a 6 am get-away from the bunkhouse. The path past the castle and up into Coire Dubh is good and we climbed quickly. The going was good on the stony ground higher up, and the views to the north to the Black Cuillin on Skye were spectacular in the slight morning haze. Finally after crossing the rocky summit of Hallival ; the view opened up to Askival, Trollabhal, Ainshaval and Sgurr nan Gillean and we could see what the day had in store; those slopes look steep... The obvious pinnacle of Askival's north ridge looks imposing, but as per the guidebook there is a faint but definite path which takes the steep slope to the left , and comes out on the top of Askival without too much drama. We were there four hours after setting out, and we had a second breakfast , and enjoyed the great views all around and the lack of the biting flies finally. The descent from Askival to the Beach an Oir is rough, steep and far from obvious, this isn't a place i would want to be in poor visibility. We laboured up the steep slopes of Trollabhal and looked out west to Harris Bay with it's mausoleum for the builder of Kinloch Castle, set in the cleared green fields . Google earth shows the tumbled stone rectangles of numerous houses surrounded by many acres of once-tilled 'lazy' beds there, before Rum became 'the forbidden island'.
The descent from Trollabhal looked so steep we eventually made it back to the Beach an Oir rather than take the direct route, then took a tiring traverse to the Bealach an Fhuarhainn, though we didn't find any water there and our bottles were running low.
The climb up Ainshaval is again steep, but a good path has evolved first to the R and then to the L of the facing ridge, and route-finding is straightforward. We were pleased to reach our second Corbett seven and half hours after leaving the bunkhouse. Mike on the climb to Ainshaval The final part of the ridge to Sgurr nan Gillean is straightforward, and we could see south to Muck , Coll Tiree and Mull in the heat haze. 8 hrs 20 min from base. 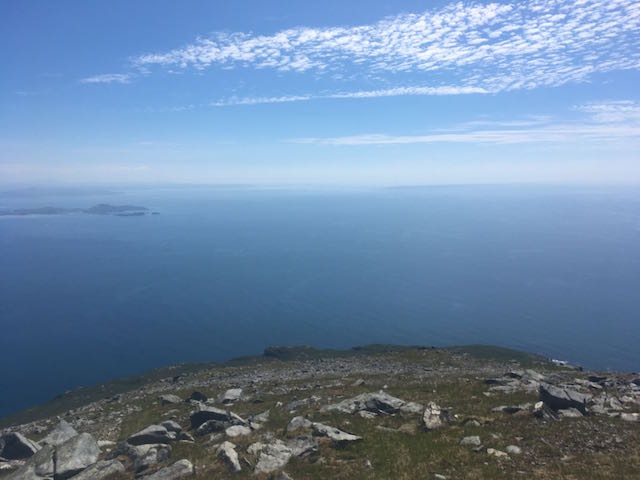 Now to get down! The descent direct to Dibidil bothy looked way too steep so we descended on broken ground SW eventually getting to the coast path at Loch Dubh an Sgorr where I took long drinks from the clear water. From here it is 2 miles to Dibidil where the bothy looked inviting...but the stream running over the warm slabs down from Glen Dibidil even more so, and I had further litre to drink in the afternoon heat. It is around 5 miles along a mainly good path along Rum's east coast, notorious for it's boggy going , it was pretty dry after the heat, and in places the normally damp ground crunched under our feet. Eigg from the Rum coast path

We finally reached the bunk-house 13 hours after setting out: a brilliant (but long and hard!) day in wonderful weather. my phone counted 52000 steps .. Thanks Mike. Arran next?
Click to mark this as a great report. Register or Login free to be able to rate and comment on reports (as well as access 1:25000 mapping).