I have been thinking way too long on how to start this report. Let's just say I am a big enthusiast of Scottish nature and mountains and I am not lucky enough to live in Scotland so I travel every year from the Czech Republic to Scotland to enjoy a bit of Scottish hills

. And because I will probably not be able to travel there this year I was feeling sad lately

That is maybe the reason why I write this report. To remind myself of the great time I have traveled through Scotland in August/September 2017 when the window in my busy schedule has finally opened

So on 29th August 2017 I packed my gear and headed for Prague Airport. I arrived to Edinburgh airport quite late, I rented a car and I set off for Braemar where I planned to stay overnight. But I was too slow I guess, the campsite was already closed when I arrived

. So I just bought supplies and went on to look for some suitable wild camping spot which I found near the main road towards Ballater.

Next morning I woke up early. Very early

. I was so looking forward for my Scottish adventure I could not sleep any longer.

I drove straight to Glen Muick. I wanted to do the White Mounth - first day, long day

. I parked the car and wanted to pay the parking fee but the machine accepted only coins!

I had only three pounds in coins and it wanted four!

So I jumped back to the car and drove back to Ballater, where i got change for the machine, and then back again, paid the fee and got ready for the walk.

I remember it was very fine day, little bit windy but almost no rain, perfect for such a walk. I was so happy to be in Scotland again.

I read a lot about Lochnagar and its beautiful crags and loch. I also read that it was climbed by the Queen Victoria herself, so it must be a truly extraordinary mountain

. When I came under Meikle Pap I immediately knew why it is so popular. The view was just brathtaking!

I climbed Meikle Pap to get even better view and got some pictures from there. The wind was quite strong so I soon decided to continue up the path towards the top. The views from the top were beautiful I particularly liked the stone with the directions and names of the mountains in the view. 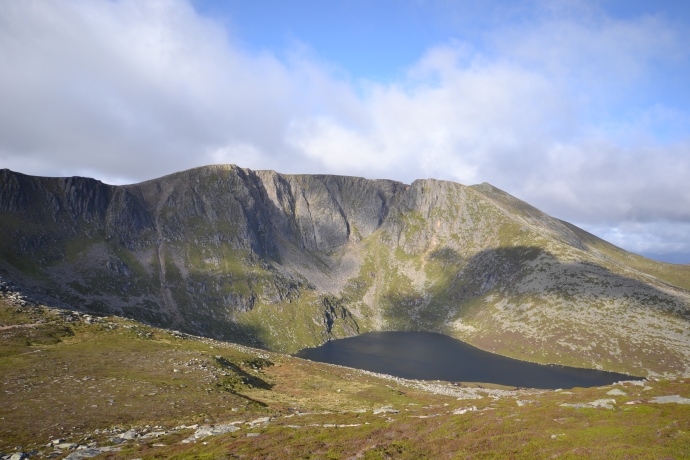 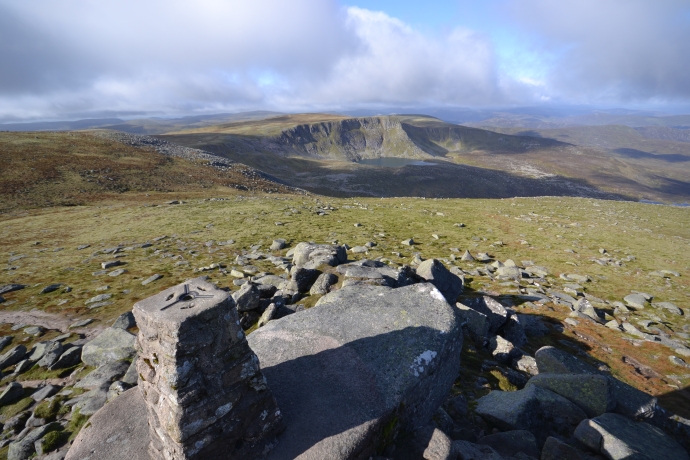 Soon I set off for the second Munro, Carn a'Choire Bhoidheach. Its summit is not very distinctive but the corries to the north of the summit are quite nice 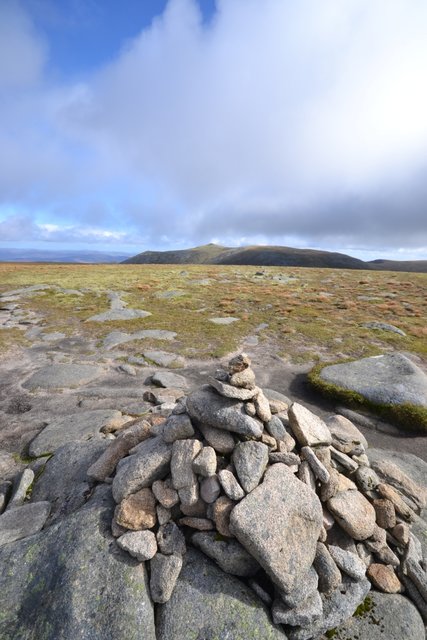 From there it was a pleasant walk down the hill and then up again towards the Carn an t-Sagairt Mor. I didn't know which of the cairn marks the very top so I touched both just to be sure

. Later I found out it is the first one when you approach the top from the south. I surveyed the debris of the plane which had crashed here in 1956, very interesting. When I decided to countinue I found out I lost my beanie on the way to this top. I was looking for it on the way back to the col and eventually found it near the path! I was quite lucky (or my ears let's say Debris of a plane

I continued towards Cairn Bannoch, a nice top with not very dramatic views but its stony top gave me a chance to have a snack and a short rest. 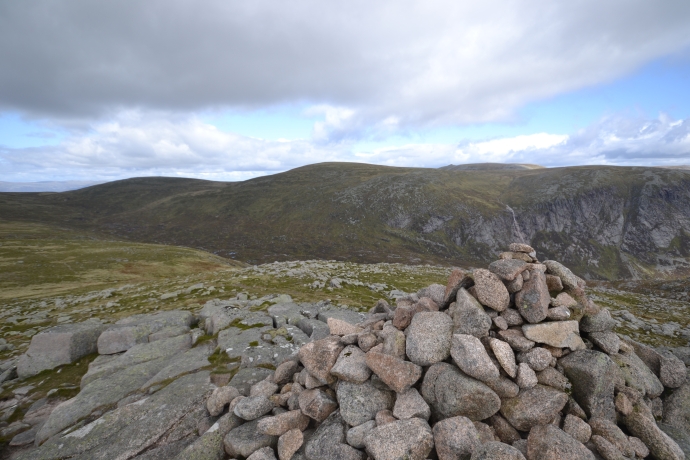 Then it was only a short distance to get to Broad Cairn. There I finally met some people. I must say the view was very nice and I understand why this mountain is also very popular. I spent only a while on the top and set off for Spittal of Glenmuick because I wanted to have enough time to find a nice campsite. I think it took me slightly under 8 hours to walk the White Mounth. I had enough time to travel west (good forecast for the next couple of days) so I jumped into the car and drove to Invergarry where I spent the night in Faichemard farm campsite, really nice place

Next morning I set off for Isle of Skye. In 2016 we managed to climb 3 Munros there in good conditions (but in April) and I hoped maybe I could do some more

. But the weather wasn't as I hoped to be so I decided to do Marsco. I always liked the silhouette of this mountain and always thought what a view must be from there. The top was cloud clear when I started the walk from Sligachan. Soon, few showers came by but by the time I came to the bealach the rain stopped. I climbed the very, very steep part to the ridge and then enjoyed one of the finest ridge walks

. Marsco is an extraordinary place. I could see Cuillins and Bla Bheinn (when the cloud cleared for a while) and also surrounding smaller hills and Sligachan. But soon clouds came in and it was time to go back. I said bye bye to the sheep on the grassy ridge and walked back carefully. I got soaked on the way to the car but it was worth it. Marsco was truly a fine experience a mountain with great character. I spent the night in Glenbrittle campsite as usually

Forecast for the next day said no showers so I decided to do a bit of scrambling and try Sgurr a Mhadaidh and Sgurr a Ghreadaidh. The way to An Dorus was quite good, no difficulties. I wanted to do Sgurr a Mhadaidh first because it is the easier one and see how hard it will be. The cloud was covering the tops but I could see Loch Coruisk from An Dorus. So I scrambled to the top of Sgurr a Mhadaidh, a fine experience although the top was not clear

. I had a snack near the top and waited for the top to clear but it did not

. So I descended to An Dorus and met a couple of guys who just descended from Sgurr a Ghreadaidh. 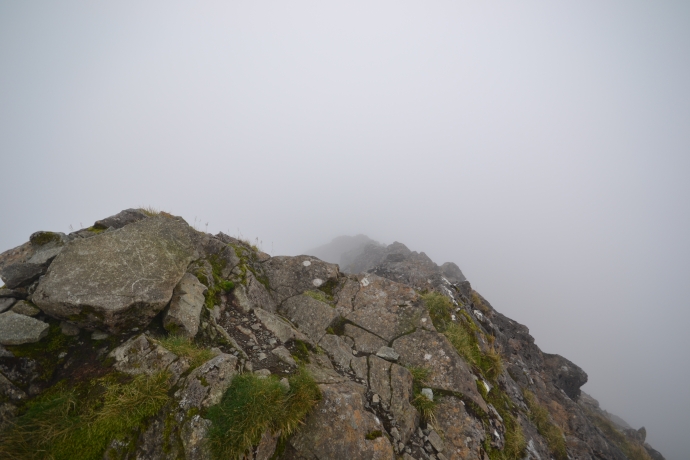 ). The scramble to the top of Sgurr a Ghreadaidh is more difficult than on Sgurr a Mhadaidh in my opinion. I soon encountered the Wart, it was majestic and even intimidating in the shroud of mist

. But I soon reached the summit and even there were no views I felt great

. I descended the same way and then enjoyed well deserved rest in the campsite. Sgurr a Ghreadaidh top - almost there

The next day I decided to drive to Torridon and climb Beinn Alligin. I was curious if the weather will oblige this time, to be honest I have never had a nice day in Torridon during my holidays

. So I set off and when I arrived to Torridon, the weather was just the best you can wish. That also meant the car park was already full when I got there, so I had to leave the car little bit further near the road. I started soon after I parked but the hurry took its toll because I forgot to take my camera!

. I realized that I forgot it after 1 km so it was not that bad. It was still ok to go back and grab it.

The walk up Tom na Gruagaich is great, in the last part it feels like a staircase

. When I got to the top, the weather was just great and I enjoyed beautiful views all around (especially Liathach). I continued towards Sgurr Mor and met a lot of people going in the opossite direction. When I got to the top of Sgurr Mor the weather improved! The views were breathtaking with Baosbheinn to the north, horns and Beinn Dearg to the west. I decided to do the horns and so I descended on the west side of Sgurr Mor and soon the fun began. The horns were not difficult and to do it in these fine conditions was like a reward for the not very good days I experienced in previous years.

And Sgurr Mor looked so majestic from the horns! Tom na Gruagaich and me:) 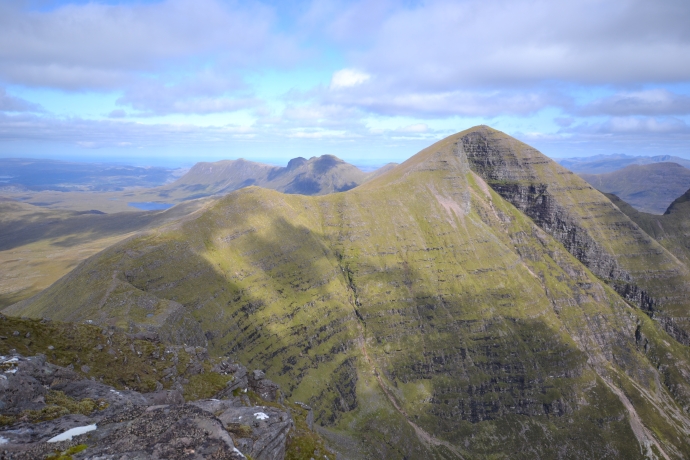 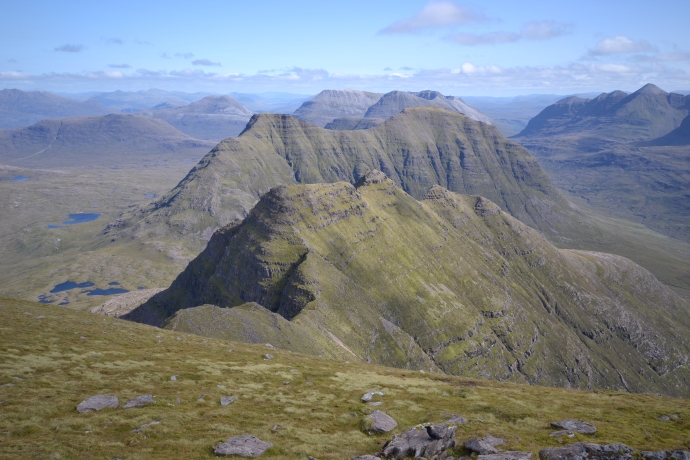 I spent the night in Torridon campsite and next day set off for Ben Wyvis. When I arrived to the parking lot, no cars were there. First part of the walk was easy but when i got to the top of An Cabar the wind had almost swept me from the ridge

. To be honest I have never experienced such strong wind in my life. I was walking towards the top and was leaning in 45 degrees angle

. But soon I got used to it. Ben Wyvis is a fine mountain, pity I did not get many views

but the experience with the wind has made for it The funny thing was I met a lot of people on the way back. I told everyone that the wind is very strong but everyone was like, 'aye that's nothing'.

I moved to Ullapool and slept in a B&B. I wanted to do Cul Mor next day but the weather was very poor so I just walked the Knockan Crag circle and then drove towards Faichemard campsite once more. Then I enjoyed a bit of rest.

. I later thought it would be better to try some lower hill and chose Pap of Glencoe. I drove to Glencoe and saw that top was visible, good choice I thought. When I climbed to the top it was still clear and there were beautiful views all around. And I was lucky to see a nice rainbow on the way back to the car. 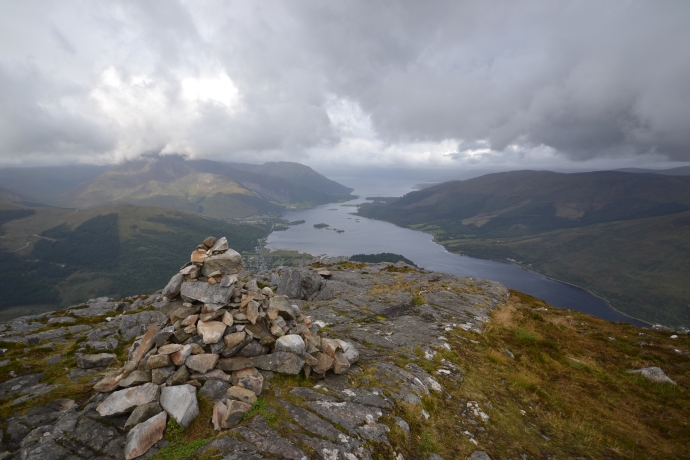 Views from the Pap I flew back to the Czech Republic the same day

. It was a short holiday but very intense and I enjoyed every bit of it

It is interesting how I could easily remember these detailed memories even though I did not take any notes or anything. I guess the pictures help

. I think I wrote this report to preserve those memories.

To be honest my lifetime dream is to climb all Munros and as many other Scottish hills as possible. I do not know whether I will manage to do it but I will do my best

. I climbed 10 Munros this holiday so I will make it maybe in 30 years

I want to thank you for your time and patience in case you made it and read the whole report. I hope the report was not boring. I thought my adventure will be worth sharing and maybe someone will find it interesting. I am always happy to read the reactions of the people who love the hill as much as I do

And a short video of the trip

https://www.youtube.com/watch?v=uBJslf3abdM
Click to mark this as a great report. Register or Login free to be able to rate and comment on reports (as well as access 1:25000 mapping).


Nothing but blue skies on Skye