It all started with a picture one of my friends posted on social media. The picture was of a lovely waterfall which I had never even heard about, or seen any photos from. The waterfall made me research the area and I came across a hill which I had never even heard about- Kaim Hill.
Kaim Hill is part of the Clyde Muirshiel Regional Park and stands broadly above Fairlie in North Ayrshire. It's part of the countryside around me, but the thought of climbing it had never crossed my mind. It still amazes me that so close to home are places I have never discovered!

A couple of days later, I set off to climb Kaim Hill. Finding the the tiny car park which provides parking for a maximum of 3-4 cars was easy and minus one other car, I was the only person in the area. 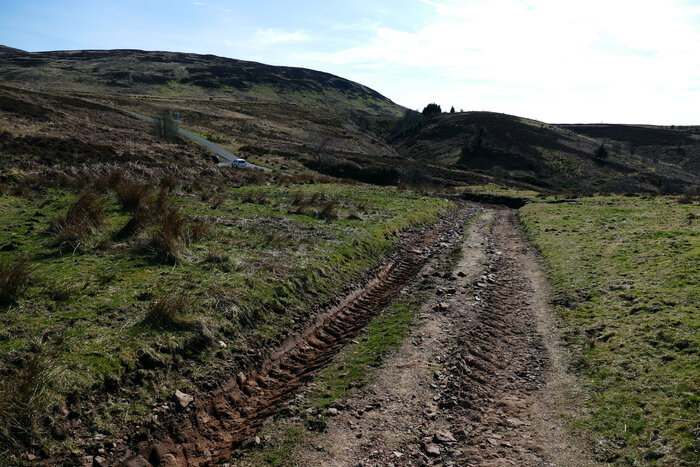 Looking back towards the car park

The track passed the small Glenside Wood and once clear of trees the views above the Clyde were spectacular! The isle of Cumbrae, little Cumbrae, Isle of Bute, Dunoon, Arrochar Alps and the isle of Arran seemed all so close. Towards Dunoon and the islands The boats with drill platforms

"How did I never knew this excited" I though when I walked along the track . Having covered the first 1.5 easy kilometers, I came across a herd of cows. Dark eyes were watching me curiously and not wanting to miss the opportunity to get some cows into the picture, I sat down while the whole herd seemed to watch me. I do like cows! Cow with Diamond Hill towards the right

Getting up again I checked the map and realized that I was close to the cup and ring marked stone. I left the path and walked through a gate towards Diamond Hill. At the foot of the hill was the Neolithic stone. It was large , flat and …pretty unspectacular

. I wasn't really sure what I was looking for and spend a good 5 min walking around the stone. I felt that I had to pay it enough attention, but failed to see the magnificent of it. Instead my eyes darted up Diamond Hill which which seemed to be a bigger pull and I walked quickly to the top. 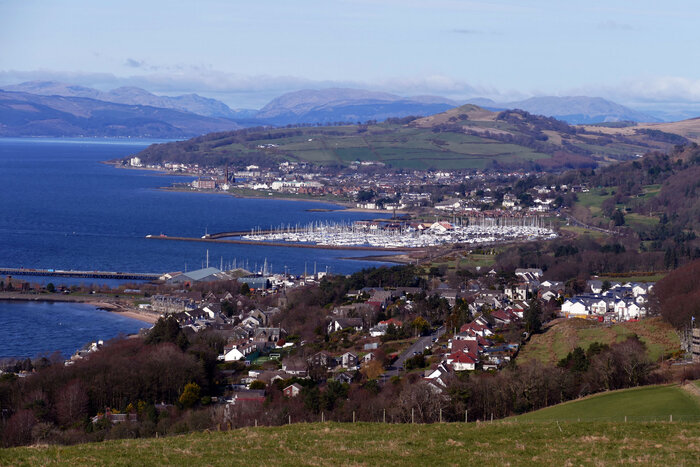 Views towards Fairlie and Largs from Diamond Hill Kaim Hill in the distance

Back at the gate a very faint track was following a burn and as I could not find any other path, I followed it. The track eventually crossed the burn and once I was out of the bracken stopped completely. Through patches of previously burned heather, I walked up the hill. The higher I got the better the views were and I stopped frequently to drink it all in. It was not a big hill, but for the first time in months I felt that I was doing proper hill walking again. The faint path through bracken and gorse Lovely views of the Clyde

I reached the Plateau like top and in the distance Kelburn Wind Farm could be spotted. I also found a path which lead me to a small cairn. Looking around I realized that I was still not at the top and saw the large trig point a few hundred meters further along. The ground was pretty wet and spongy up here but the views along the barren hills pretty extensive. The Arrocher Alps are in the distance The trig point was surrounded by a circle of stones, which I guessed came from the mill stone quarry further down. The wind was cold up here and not wanting to linger too long I followed a path which I hoped would take me to the quarry. Walking along the cone shape of Ailsa Craig could be seen in the distance with the rather less attractive Hunterston Power station below. The cairn with Arran in the background With the track frizzled out I took a GPS reading and set straight down to the quarry.

Kaim hill Millstone quarry used to produce excellent quality millstones and the stones which were cut and later cemented into the well known wheel form. Once completed they were send all over Britain and even exported to the West Indies, America and Australia from the early 18th century. The Smithy and quarry panorama Part of the quarry

I found this rather fascinating and I spend a good while walking through the quarry and inspected the ruin of the stone Smithy which still overlooks the quarry. Dragging myself away, a good path was reading down the hill and back down to the Fairlie Muir Road only slightly higher from where I had parked.

Walking past my car, my next plan was to visit the waterfall. I walked down the road and crossed a gate into a field on my left hand site. At the bottom of the field is another gate which I crossed. A dirt track leads up through a forest until I got to an old stone bridge. From the stone bridge the path leads up a track out of the forest, it's important not to follow this track. Instead from the bridge I followed a much smaller path along the burn which leads to the top of the waterfall. From here it's a short, very steep and tricky walk down the right hand site of the burn. However the effort is worth it, as the waterfall (called Bigglees or Linnford depending which map you use) is pretty spectacular. The second gate to cross Once I climbed up the steep side of the burn again, I walked back to my car. It had been a short day in comparison to bigger hill days, but at least I had discovered a lovely area close to home .
Click to mark this as a great report. Register or Login free to be able to rate and comment on reports (as well as access 1:25000 mapping).

The underwater trails – Snorkelling in Scotland