With the lock down restrictions lifted, I can honestly say that the past 4 months have been rubbish. I am usually a very positive person, but in the last months lock down had really started to affect my mental well being.

Hearing that lock down had lifted had an immediate effect on me. For the first time in months I was truly happy again and went into planning overdrive.

Picking a hill which would suit my (currently non existing) hill fitness, a knee still recovering from injury and trying to stay away from crowds, yet not venturing too far afield wasn't the easiest.
The search ended with the Corbett Stob Dubh in Glen Etive. It had been on my to do list for years and I hoped it would be less crowded than the nearby Munros. I arrived at the starting point at 10 am and minus one other car in the small parking area, there seemed to be no one else. 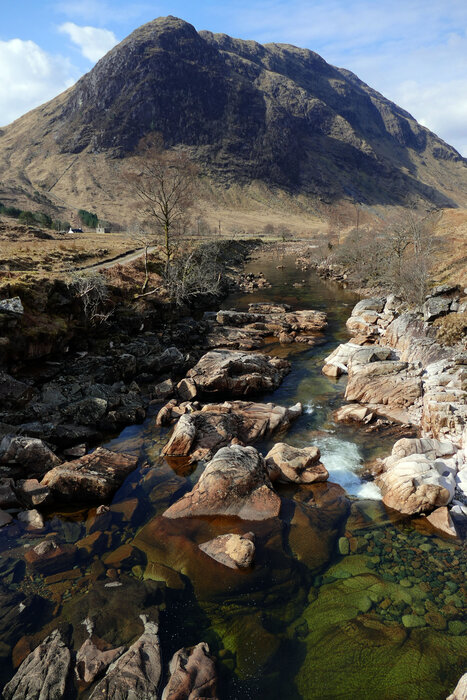 Stob Dubh from the bridge

I crossed the bridge and followed the signposts over the grassy area to the second bridge which crosses Allt a Chaorainn. The deep pools of the burn were emerald green and looked so inviting. 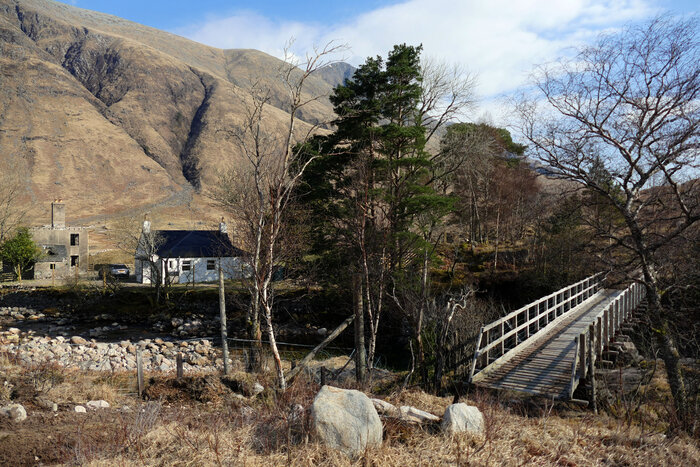 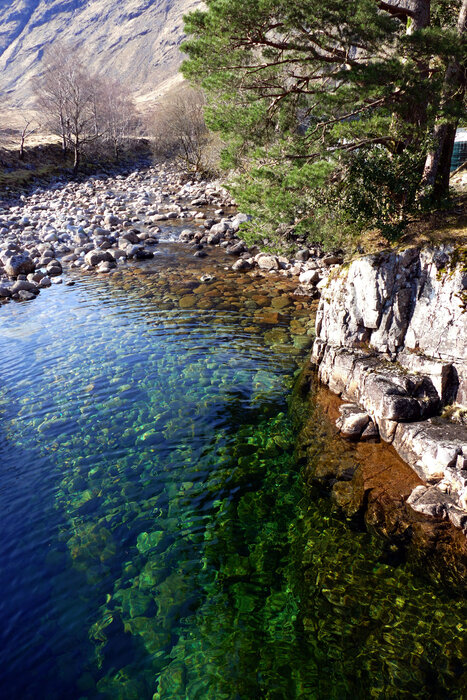 The path continued through a small forest...so boggy, but not even bog could bother me. Spongy I thought instead and squelched along the track. I crossed a gate with an impressive step system in place and reached the open moor. 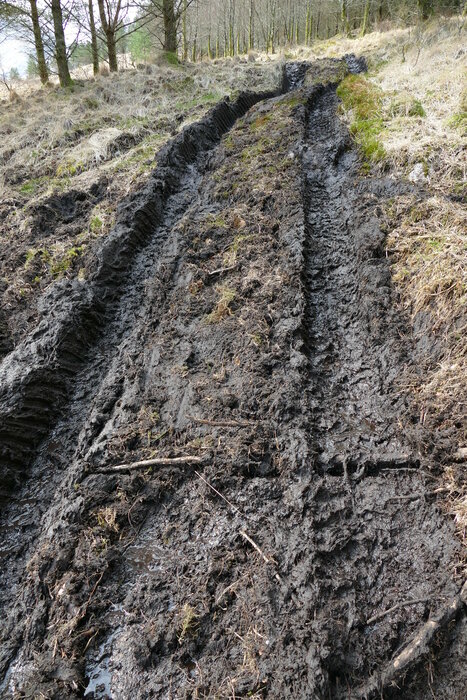 Instead of heading straight up, as the walk description suggests, I followed a land rover track the path until I reached the area below Coire Dubh-beag. Looking up I began the climb and was happy that my knee (8 weeks ago I was only able to hobble around the house) did not bother me. The glacial pace I was doing due to being completely unfit probably helped too

Just as well I was alone, this was embarrassing! 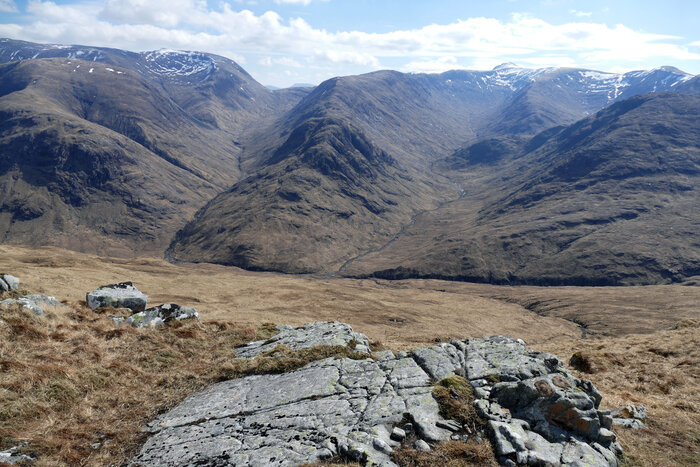 I finally reached Coire Dubh-beag (after what have seemed an eternity) and was rewarded with amazing views. The cliffs fell vertical down to the valley and it was worth while exploring the area. 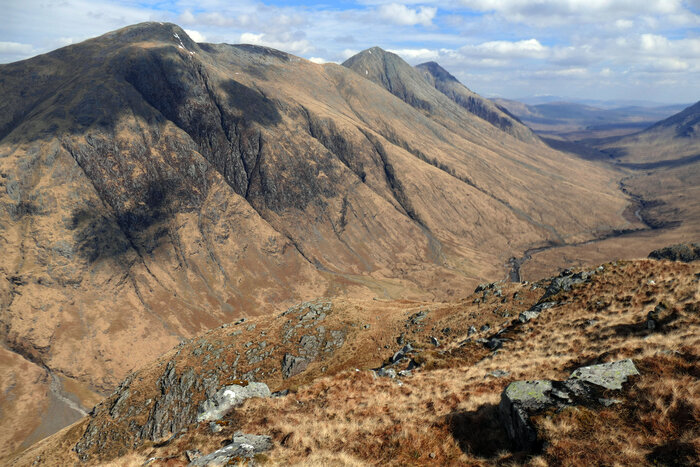 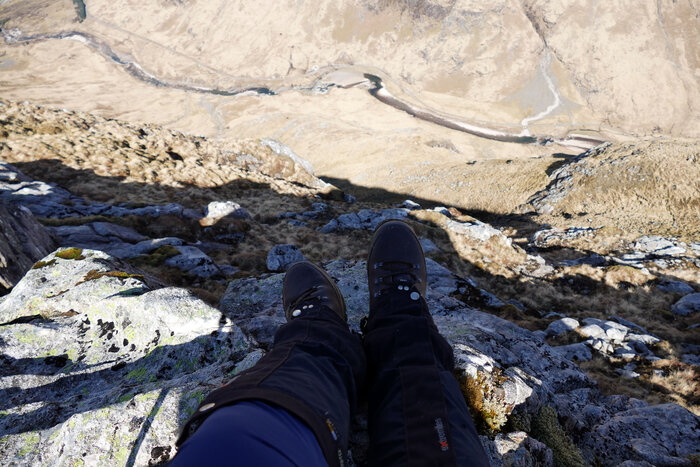 It's a loong way down 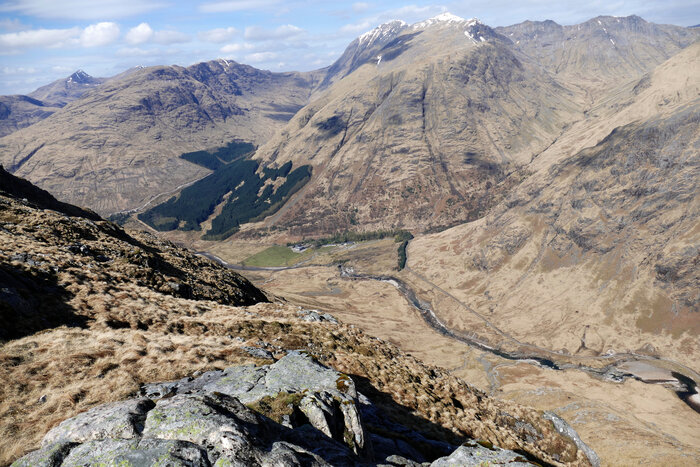 Further up the glen

With enough photos taken, I continued up hill. Lots of wee lochans covered the top of the hill and the summit of Beinn Caithline was now in full view. For quite a while I thought it was the summit I was aiming for, until the top of another hill came into view. I was pondering for a while which hill this could be. It looked far too steep to be Stob Dubh. Convinced that it wasn't I continued the walk and enjoyed the amazing views to all directions. 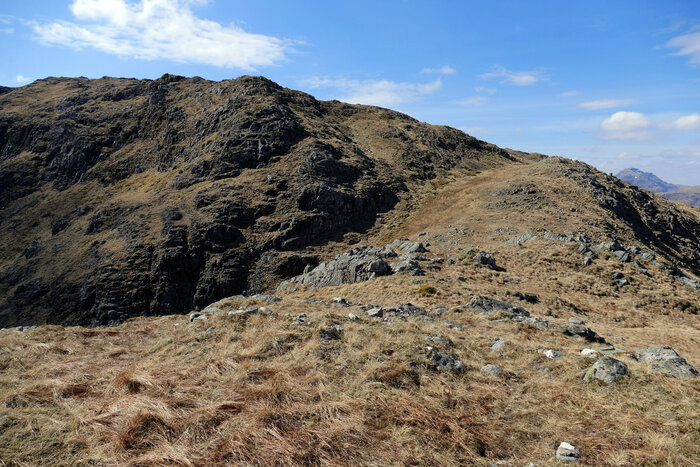 The walk continues up

I could not get enough of the views 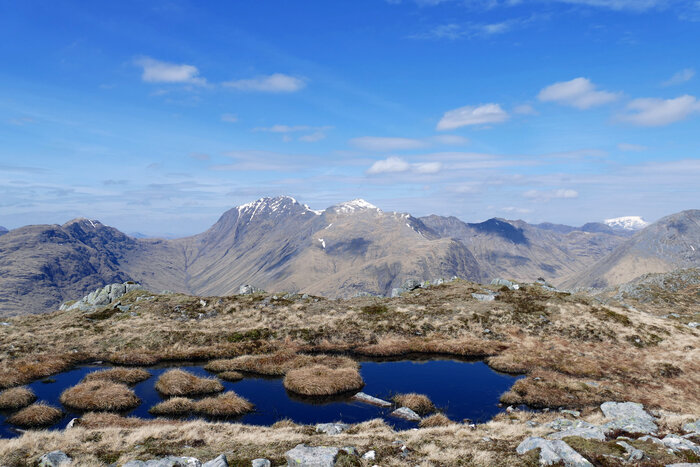 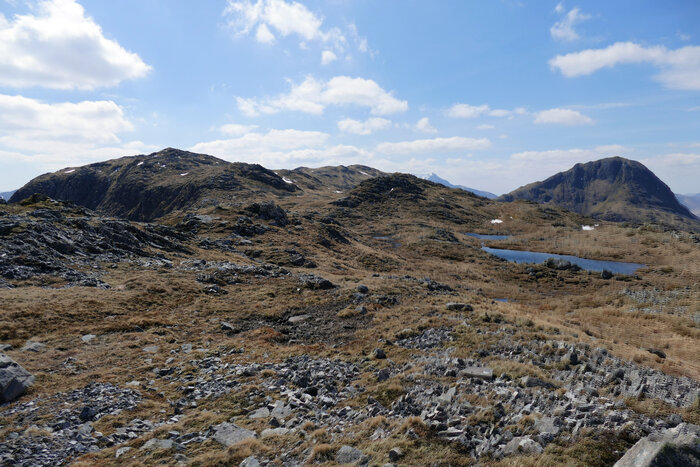 Looking ahead with Stob Dubh to the right 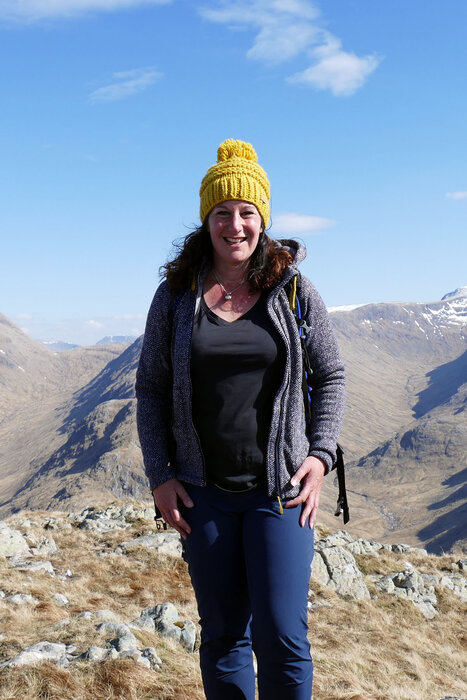 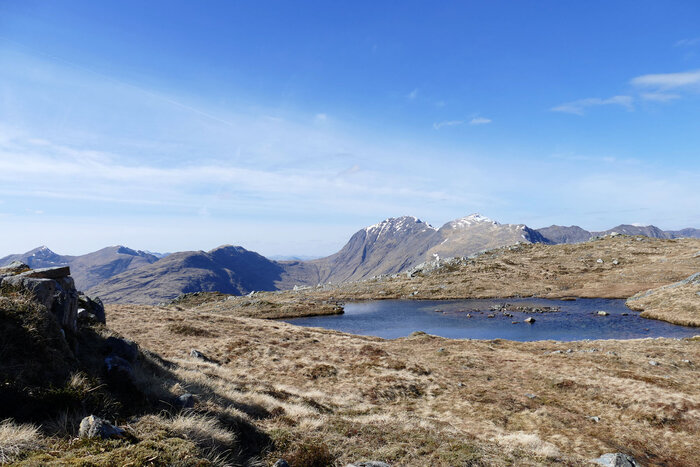 It was impossible not to stop and take photos and name the peaks around me. Getting closer to the point I had thought was the summit, I soon realized that I had been wrong. The 'steep' point I had first seen, was in fact Stob Dubh. It started to look less intimidating closer up, but still quite some distance away. 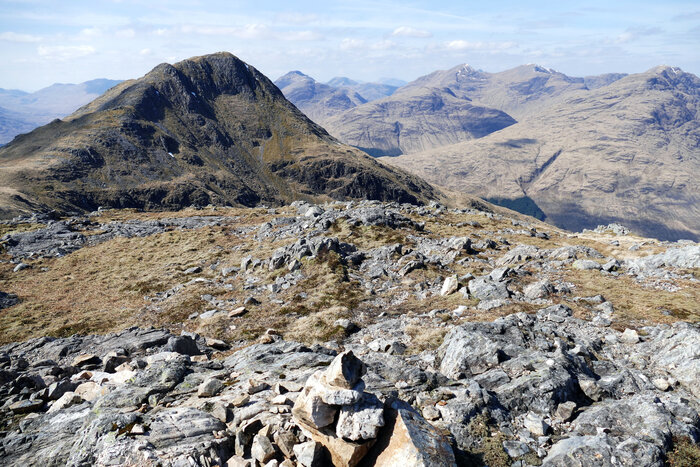 Getting closer I had to loose some height (always seems unfair) before the last climb to the summit of Stob Dubh began. Sticking to the grassy sloped it was a slog, but not as bad as it had first looked.
Finally at the top, the views across the mountain of Glencoe were impressive. I found a sunny yet wind still spot and while having a late lunch just recharged my batteries with mountain views. I was amazed that I had not seen a single soul and it was more than I could have hoped for. Having the whole mountain and summit for myself felt just about right after all those months of absence. 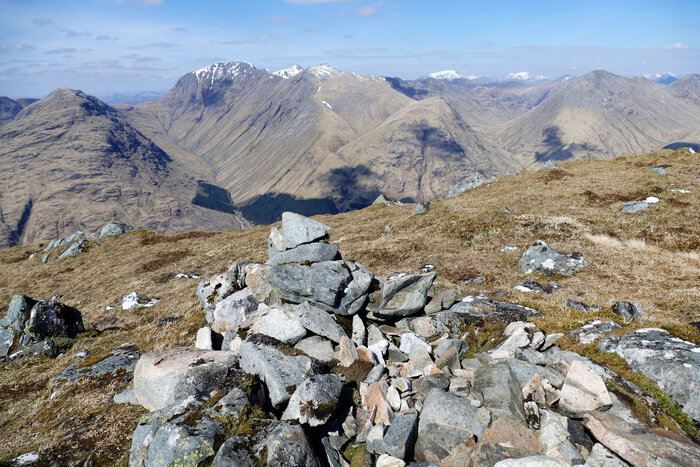 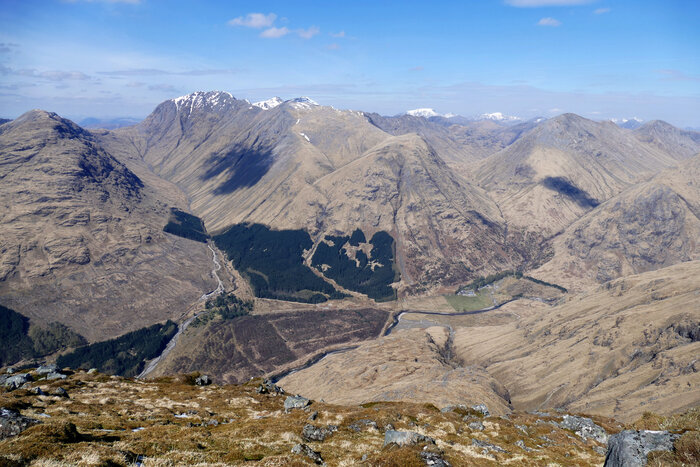 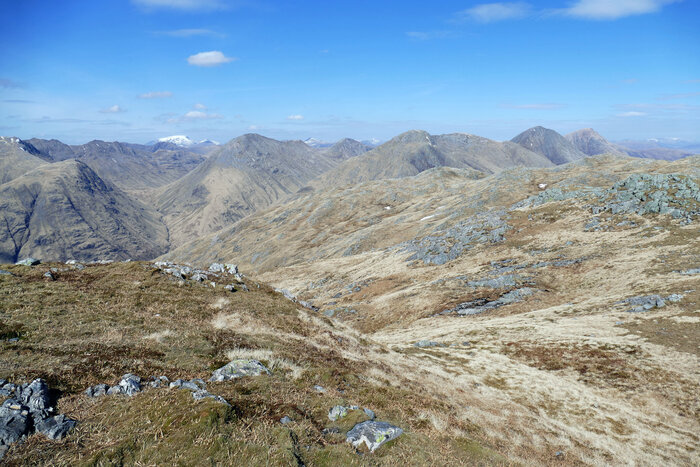 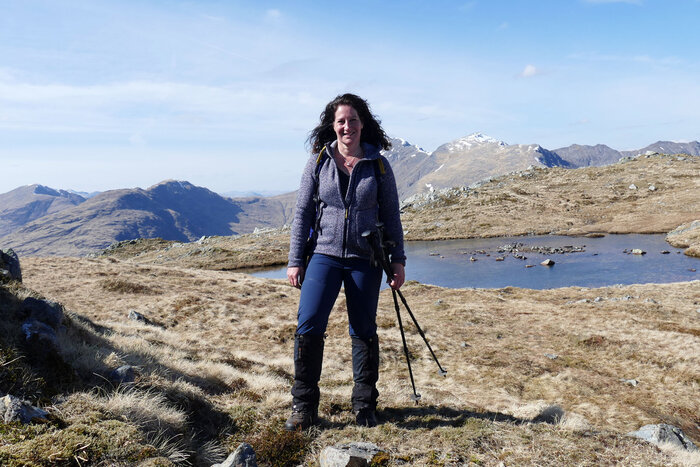 During the walk back

I returned the same way, but to make it slightly different I climbed the wee summits I had previously left out, just to get some other views. As I had wanted to visit An Grianan on the way down, I took the steeper route downhill which was a mistake. My knee which had been doing great on the way up now started to bother me and I had to take it really slow. I was probably slower down than up, but I did not wanted to take a risk. Needless to say I did not do the short scramble up An Grianan, which was a shame, but better save than sorry. I was relieved when I reached the flat ground again and my knee eased off a bit. 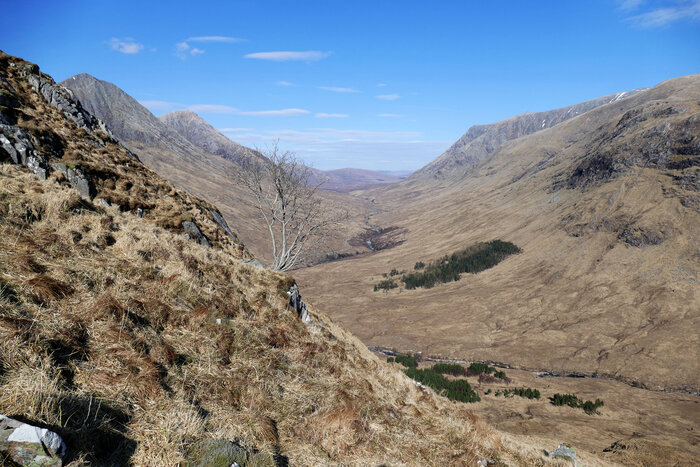 The steep down climb 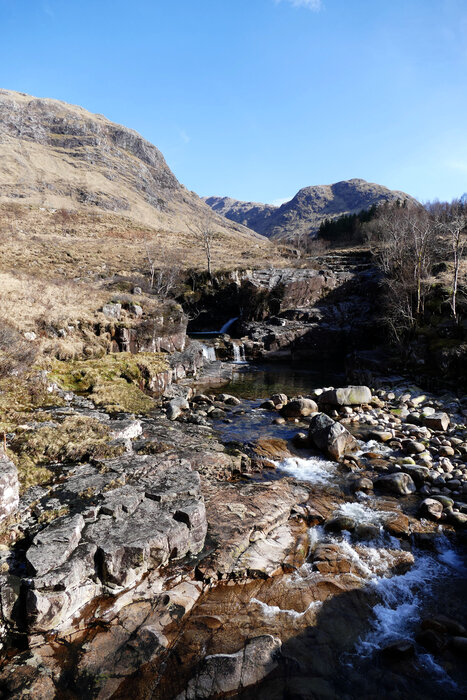 The burn on the way back

Reaching the emerald pools a group of boys were enjoying a swim and gave me a cheery wave when I walked past.
The sun was still beating down the sky when I drove home through lovely Glen Etive and the roads up north I had missed so much. I really hope this will be the start to a great summer and a final end of lock down.