I'm planning Beinn Eighe this month - but waiting for a certain friend to come with me, and he doesn't have much free time - meanwhile I wanted to see what this one was like, so I asked Black Panther to come with me, she's done it at least twice before and weather was good.
I picked her up and off we went down to Aviemore. The sun came out between the clouds and once I'd found the parking spot 'Musical Panther' set off up the track. The large path all the way to the pass at the top is easy, then it's off to the left up the hill, also a massive obvious path, to the summit point. There's one gate to go through.
On the way down we took the alternative route, which BP hadn't done before, so that bit was new to us both - and much more enjoyable to be off the track, with great views to Lairig Ghru and Loch Insh.
There were some gates and a bit of tarmac to negotiate at the bottom on the return to the car but nothing too bad.
Took 15 minutes to eat lunch at the top, so walking was 3hrs 45mins roughly. A quick and easy Corbett, although it is pretty much straight up from the car.
Photos below..... Dark skies but the sun is coming out Track to the summit 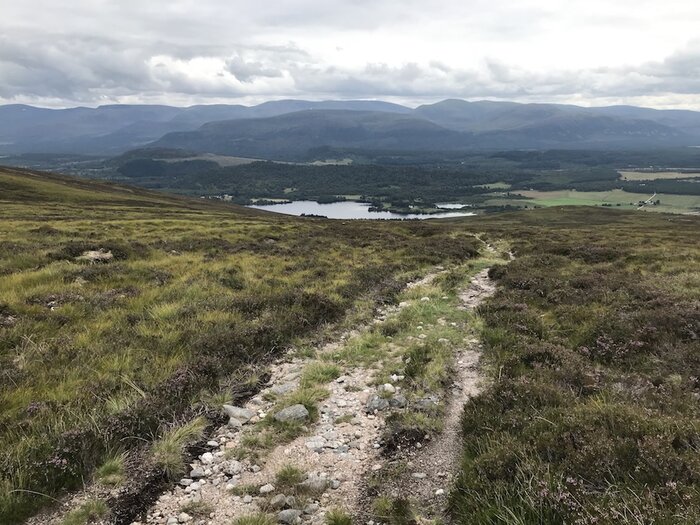 Dodging showers, but not the endless heathery bogs...

Is this the prettiest short, level walk in Scotland?

The Piglets and I ascend Meall a'Ghiubhais

Dry going up, wet coming down! But still no eels :(

Sunshine and Salad at Abriachan

Location: Beauly
Occupation: Musician, composer, music teacher
Interests: Music, birding, mountains, gardening, knitting
Activity: Mountain Walker
Pub: My flask, and a view
Mountain: Suilven
Place: Impossible question
Gear: I love my Paramo
Member: None yet
Camera: Nikon D40 SLR
Ideal day out: A hike up a characterful hill with good views and a ridge, no midges, not too hot, and a good dinner at the end of it...
Ambition: To walk Lairig Ghru, solo