I slept in the camper van the previous night. In bed by 9pm and asleep by 9:30pm. This was due to walking A'Chralaig and Mullach Froach Choire the day before.
My left knee started to twinge on the slope up Am Bathach. I wondered should I go back, but decided to push on. As I climbed, the thought going through my mind mostly was to go on a diet and get fitter. And to stop drinking so much ( but I do have a batch of all grain home brew going as I type this and it would be daft not to try it). This would mean I could fly up the hills in future. I would blame Covid, but it really is my own lack of discipline (and Covid).
It looked like I was going to be all by myself all day, but that did not bother me. It was a struggle to get to the top and when there it was a fairly flattish area with no sign of the path. Although the general direction was fairly obvious, I could only see the faint outline of something quite far away. Halfway down it started to pour with rain. Not the forecast I thought. On with the waterproofs and off I set. I felt my right leg getting wet. The zip had burst and was only connected at the top and bottom so the rain had easy access. I popped the studs and that seemed to sort it out. All of a sudden, in the mid of my mini rant at the waterproof trousers, a young lady came sailing past me. She must have been going like the clappers to catch me up. We chatted briefly and she zoomed off. I managed to keep pace for a while until it was time to go uphill again after which the gap stretched. No matter, I was plodding. Heading up to CD was a boggy mess. I had contemplated using my approach shoes for this, but opted for boots and gaiters. Thank goodness. The track is a bit tricky to follow and I went astray. Eventually I found it again and the going got better. I took a photo of AB on the return route. I saw a couple coming up the direct way. 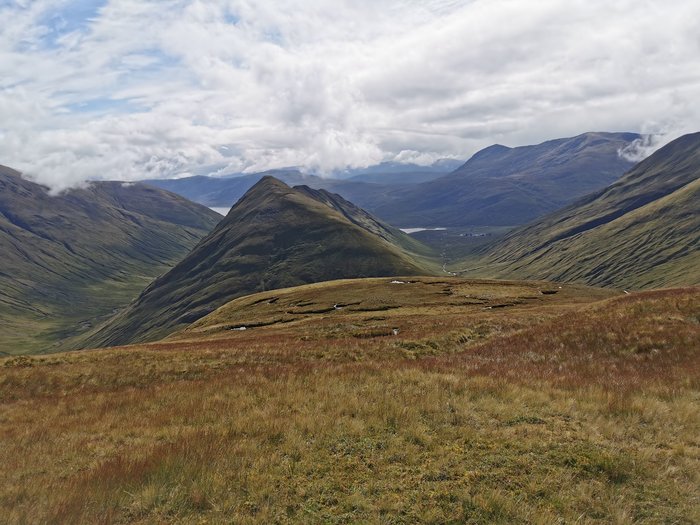 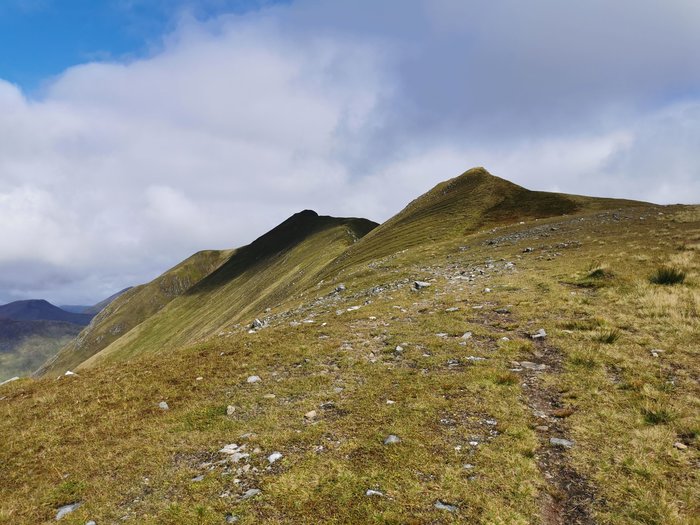 I could see the young lady in the distance, her bright green rucksack cover easily spotted. She was a fast descender. Soon enough, I was back at the van.
Lessons learned. Don't get so fat that it means taking extra kilos up into the hills. Check the route out more thoroughly than just glancing at the map and saying, 'Meh! That looks fine.'
Was it good. Yes indeed it was, except the knee thing, that was a bit sore. Fitness training will help that though.
Click to mark this as a great report. Register or Login free to be able to rate and comment on reports (as well as access 1:25000 mapping).


The one that didn't get away