It was February the weather was rubbish and I found myself near Largs. I had undertaken some Mountain leadership training in the last year and was approaching the possibility of booking my assessment. With a flexible finish time at work possible I thought it wise that I should take the opportunity to get into the hills and practice some poor visibility navigation. Joy!

We had done some night time navigation training on my ML course and I found it slow work and quite intimidating. Nothing quite like being out in the dark sky with visibility of less than 2 m to really get you studying the map and the ground around you. After the exercise we learnt that we had walked at about a pace of 1km/h!!!

I would highly recommend it for any hill walker as a) it'll make you a better mountain walker and expand your knowledge of maps, navigation and map memory, b) I am of the opinion that if I had to use some serious navigation in an unforeseen event to get safely off a hill I would have liked to have practised it before having to do it for real.

During the training the trainers suggested that the hills above largs might be a good place to practice some poor visibility navigation using the multitude of aircraft wrecks in the vicinity. A quick Internet search proved very fruitful and gave me the grid references of a number of quite significant wrecks. My plan was to get high on some of the first summits prior to darkness, find the first wreckage and then navigate some more a bit further into the depths of the hills. I had picked a wreck some distance away from the road on the slopes of box law with some intermediate peaks/wrecks on the way.

I found a place to park just off the main road where it looked like they’ve been doing some construction work on a new pipe. There was a new track not marked on the map that I could use to lead me up to a forest where I could cross and head up directly to the first summit. The new track not marked on the map but very useful Ultimately the glen I would walk back down

The cloud level was at about 300m so I was quickly engulfed in the poor visibility I wanted....after all, that was today’s main aim. Even the route up the initial slope required a little more navigation than simply "keep walking up hill" as there were crags at the top that I wanted to avoid. I sighted on a few knolls and tufts of grass on my way up the slope. Bearing on the grassy lump that is slightly different in colour I arrived on the first summit with quite a lot of light and made my plan for getting to the first wreckage across pretty bleak featureless terrain. 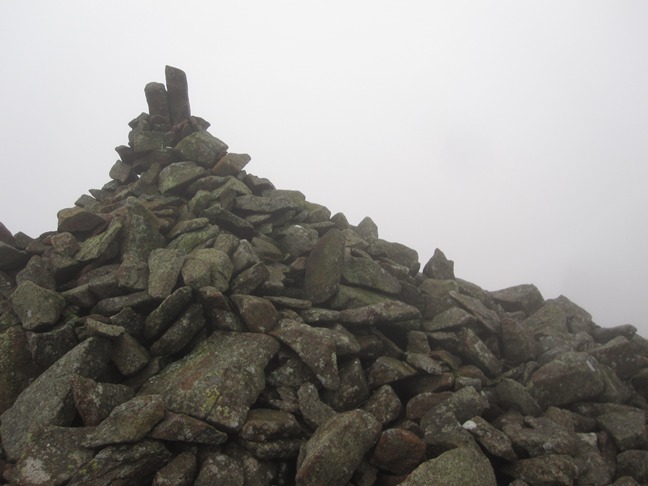 Using the ‘ring features’ (summits), Bealachs (cols) and linear features to aid my navigation I could thread my way across the moor. ...the way ahead - just walking in straight lines for set distances

I arrived at the first "summit" after walking my allotted distance/time at the required bearing. I surveyed the ground around me which did indeed looked like a summit so reviewed the map and took my next bearing. Breaking a journey down into smaller legs allows you to cross ground whilst minimising the risk of compounding any errors resulting in state of being "temporarily misplaced" (never say lost). Keep a "snail trail" of where you have been will enable you to backtrack and try again...at least that's the theory. ...a kink in the road! Stop, check surrounds, take bearing and distance, walk...

A new bearing at the bealach and I was hopefully walking up to the summit of Irish Law. It was here I crossed the fence that wasn’t marked on my 1:50 000 map.....a common theme. After pacing and walking for my allotted time I saw the trig point on my right hand side indicating that my bearing must’ve been out slightly or I drifted off line as I was walking up the hill....a common mistake. I have found that When following a bearing across the slope you either drift uphill or downhill everyone is different but you need to know which you are. Irish law appears out of the mist

Now at the trig point I could focus on locating the first wreckage. I took a bearing to the grid reference I had and started pacing. After my allocated time I stopped. Visibility was approx. 20-30m but I couldn't see any wreckage. Aiming for a 100m x 100m square with 20m visibility I suppose that was no surprise. I planted my poles and set about a box search of the area. I walked North until I could only just see my poles counting my paces. I then turned through 90 degrees and walked twice that distance, I then turned another 90 degrees and walked three times that distance and so on. After a few turns I found the plane. It was spread out over quite a large area and I estimate my poles to be about 50-60 meters away. after some considerable boxing the wreck appears from the cloud 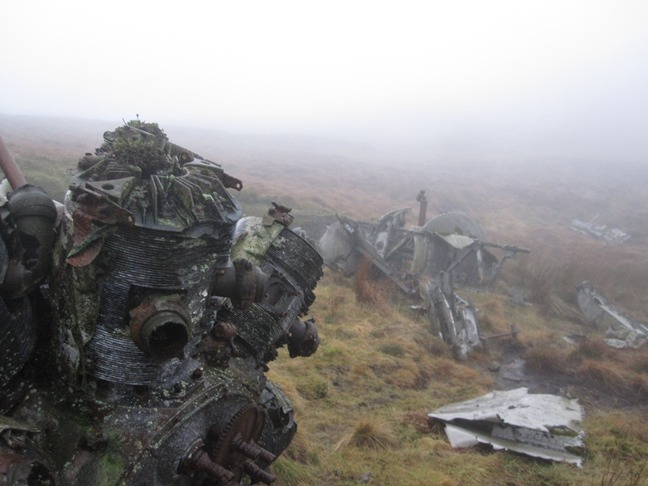 quite a lot of the plane exists Next up was the big leg across to box law with the light rapidly fading!!

The terrain was pretty featureless and with little gradient in places - large flat bogs appearing as bealachs on the map. Identifying these in the dark is hard so pacing would be key.

Pacing and time moving across different terrain obviously differs. You need to know your average paces per 100m and an approx. time for normal walking, heather bashing, peat bog meandering, slopes, boulder fields etc... This was to be a lesson for me to thankfully learnt the "soft" way. So, I had my plan and started my pacing and timing. The area around here is pretty flat and as such is pretty boggy with peat hags everywhere. Following a direct line bearing was both wet, muddy work and tiring. "Boxing" around hags was time confusing and needing good management of pacing.

After my allotted time on course I reviewed my position and confirmed I thought I knew where I was. I re-aligned my bearing for the next very wide bealach and wandered of into the darkness. At my allotted time I took a 90degree turn to the West and headed up towards the ring contours of the summit.

I was aware I was drifting to the left up to a minor peak. The size of this peak didn't recognise the 30m(ish) height gain the map indicated!! Hmm....I was not where I thought I should have been. Knowing that the peat hags had been a time consuming wander I guessed at my rough location. It was at this point I had an annoying decision to make. I had told Bean what my plan was and that I would phone at 7pm once down off the hill. It was probably about 5:30ish now and I was at more-or-less the furthest point away from the car - a little "misplaced temporarily" and it was dark. I knew I had tools in the navigation box that would allow me to investigate my position but I didn't have the time to waste. I didn't want to unnecessarily worry Bean so thought I would cut the training trip short - confirm my location with GPS - turn GPS back off and practice my navigation back to the car from a known starting point.

This I did and was not overly surprised with my location. I had indeed turned West too early probably due to the significantly hard peat bashing through the difficult terrain. It was a good lesson to me and although I felt some disappointment as to having to turn on the GPS, I was pleased that I had a good idea where I was prior to this. The ground around me didn't indicate that I was at the summit of box law and I knew that.

After a bit of tea and a bite to eat I reset my aims for a summit on the way back via a stream, a kink and a pacing/bearing check to a known obvious grid reference on the slope of the next hill. I was annoyed at myself for telling Bean what turned out to be an unrealistic time and wanted to make the most of training night time navigation in cloudy, damp, misty dark conditions. I aimed for a stream to confirm to myself I could find it and then effectively boxed to the next summit via a very broad ridge, some stream crossings which reared out of the mist alarmingly and a well defined hill. Contours on a 1:50 000 map are every 10m - thus a 9m cliff may not be marked on the mark - this was the case at the stream crossing - a direct bearing across it was adventurous to say the least. Eventually after a challenging route I emerged to what I thought was the summit. It was very rounded and I used a neat trick to confirm a summit was present. I planted a pole, attached my head torch to it and wandered off to the limit of visibility. I then walked 360degress around it and was pleased to know it was always above me albeit only very slightly. Happy I knew where I was I set about a plan back to the car. Checking I'm at the top

Using streams as linear features to "handrail" is a great technique to get off a hill quickly. There was a obvious route that also used a significant catching feature to confirm my location along it and I set off down the hill aiming off slightly to enable me to know that I should turn right once I reached the stream and hence end at my catching feature.

This found I then followed the main stream down - with a surprising amount of difficulty - until I hit the forest. I had estimated the time this would take and was anticipating seeing the forest from a little distance away but was surprised that I suddenly came across a tree!!!! I was no more than 3m away and couldn't see it!! That is poor visibility!! A tree!! Only noticeable at about 2m away!!

Anyway, back to the pipe track and it was an easy wander down to the car where I phoned Bean at 6:57pm.

Job done!! I got out of all my wet gear and changed into some warm clothes - finished my tea and headed home pleased with the learning experience I had just undertaken. All of this was my own personal practice using skills from ML training, significant walking experience and reading up on the subject of navigation. There are plenty of good books, training providers and resources on-line (including walkhighlands) to learn the basics and more advanced navigation to enable you to be prepared for the worst. I thoroughly enjoyed my ML training and assessment and would recommend it to any like-minded person. I have always been pretty ok with mountain craft and navigation but I learnt a lot by studying others and recognising my own weaknesses. This has led to me enjoying the mountains in a completely different light for which I had not anticipated. Get out there and have some fun. Practice, use common sense and be safe.