Route: Beinn an Oir, via Loch an t-Siob

This is one my daughter K and I did in September, I just decided to write it up during lockdown a) for something to do, and b) as a reminder of happy times.

Having done virtually no serious walking at all during the year due to Covid restrictions and various other commitments, we were desperate to fit in at least one decent hike during a short family holiday to Islay and Jura. I had read an account by Cameron McNeish of the Paps of Jura, and while we were in no shape to attempt all three, I thought that perhaps we might manage one and get a close look at the others.

The Paps were clearly visible from the Feolin ferry, and really, the weather felt perfect there and then – warm, windless with just some small wispy cloud. Unfortunately we were arriving too late in the day for a major expedition. All we could manage was a short leg stretcher up behind the village of Craighouse, which nevertheless gave us a hint of what the terrain on Jura would be like – rough, wet, spongy, pathless! But the forecast for the following day was again fair, so we made plans to tackle the Corbett of Beinn-an-Oir.

Having the luxury of staying in the Jura Hotel, with its wonderfully friendly staff, we were set up for the day perfectly with kippers and poached eggs, before making, what was for us, a pretty leisurely start, arriving at the three-arch bridge at Knockrome junction at around 10.30. There were a few cars there before us, and we squeezed into the last space, before setting off on another beautiful still morning.

It was a day of firsts for K and me. A first serious hike of the year together, a first for either of us on a Scottish island, and our first walk with a Walk Highlands bog factor rating of four! We were curious to find out what that last one meant.

Well, we weren’t kept waiting for long. From the bridge, there are traces of various paths heading in the general direction of the Paps. We plumped for one that seemed slightly more defined than others, which at first seemed reasonable. A bit wet underfoot, but not too bad. “If it gets no worse than this, it will be fine “, I thought hopefully. Pretty soon though, it did get worse. Much worse. Soon it became a choice of trying to hop from tussock to tussock, or ploughing on through and getting very wet feet. We started with the former approach and ended with the latter. That first section of the walk, which cuts across the curve of the Corran River, before re-joining it close to a crossing point, seemed to take forever. Well, probably a good hour and a half, and we were still nowhere near “base camp”, from where the real ascent would begin. After a bite to eat, a short section of stoned path took us to the stepping stones, which are quite large and easy to negotiate, and the view across Loch an t Siob towards Beinn a Chaolais was spectacular. Across the lochan to Beinn a Chaolais

Even better, the path on from there, above the lochan, while a bit damp, was sahara-like compared to what had gone before.

We met a couple who were waiting to meet up with their daughter, who was tackling Beinn Shiantaidh. Apparently she had just called them to say she had seen a snake at the summit. The gentleman then said he had seen one too, near to our path. In fact he had almost trodden on it. This news did not go down well with K. Apparently I had omitted to mention even the possibility of a snake encounter during our planning discussion. We proceeded thereafter with significantly more caution than hitherto.

There was no obvious track up to the bealach between Beinn Shiantaidh and Beinn an Oir, so we left the path just as it seemed to be starting to descend, and picked a line up and across the hillside. There were lots of curious little holes under rocks, and I wondered if they might belong to snakes, but prudently I kept my mouth shut. That is, when I wasn’t gasping for breath, because this stretch was proving a real struggle, due to my lack of fitness. By the time we reached the bealach I was puffing and blowing fit to burst. Depressingly too, the tops were now shrouded in cloud, so it looked like there would be nothing to see if/when we ever got there. K, obviously sensing that a little encouragement was in order, insisted she could see the summit “just up there”, so on we plodded.

Of course she lied, but after working our way up a ramp to the next level, we thought we actually could see the summit above us, so we pushed on again, helped now by the blessed relief of having a decent stone path under our feet. I mentally thanked all those unsung heroes who prepare and maintain footpaths for us all.

There was a fabulous moment, where the path doubles back on itself towards the summit, when we could see over the other side of the Paps and away up the north-west coast. It was only there fleetingly because the cloud was coming down, but it was a fantastic view, and made all of the previous effort worthwhile. Looking beyond the Paps to the North

Feeling a renewed surge of energy, we bounded up the last section onto the summit plateau, and into the clag. We could just about see the way ahead to the cairn/shelter, across a boulder field, and made our way towards it. Disappointingly, when we arrived there visibility was down to about 10 yards. We hung around for a while in the hope that it would improve, but the cloud seemed to be getting even thicker, so we decided it was time for a tactical withdrawal. Back down at the bealach, however, the cloud quite quickly began to clear, and within minutes the tops of both Beinn an Oir and Beinn Shiantaidh were bathed in sunshine, gradually followed by Beinn a Chaolais. 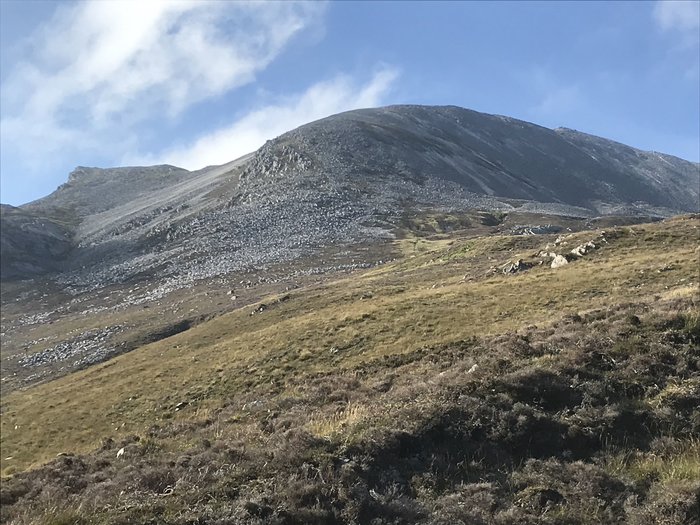 Looking back at Beinn an Oir - now clear!


To see the Paps up close with such clarity was a real treat. We began to have a much better appreciation of the steepness of some of the slopes, especially on Beinn a Chaolais, which looked formidable, and also of the achievement of summiting all three in a single outing. Hats off to anyone who has done so. I don’t think at my stage in life (65 in December) I am going to ever be fit enough to tackle them all in a round. K could be, but her view was that if she never did another walk with bog factor 4, it would be too soon. And we still had the return leg to come.

We chose slightly different lines for the descent back down to the lochan, and when we met up again she announced that she too had seen a snake, and was not at all pleased about it. Clearly there were plenty of them around. The walk back to the stepping stones was uneventful however, which just left us the bog to re-cross.

Maybe it was because we were tired, but it seemed to be more difficult to find an obvious path on the return. Various tracks appeared and then seem to fizzle out, and we would often find ourselves blundering through knee-or even thigh high grass with no idea whether we would be stepping on dry ground, marsh or snakes! Oh, and the midges had decided it was dinner time. Finally we made it back to the car at around 6.30, ready for a quick shower and a long beer. Or was it the other way around?

All in all though, a great day. The Paps are quite unlike anything else, and the views we had of them in the afternoon sunshine were amazing. It was a real privilege to see them up close in such benign conditions, and I really do recommend the walk - just be prepared for that first section, which is probably an unpleasant wet slog at most times of the year. Would be interesting to try it from the west – a bit longer maybe, but there seems to be more of a track shown on the map.
Click to mark this as a great report. Register or Login free to be able to rate and comment on reports (as well as access 1:25000 mapping).