Having climbed Stob Binnien some time ago from the south we decided to tackle Ben More from the north despite it's reputation for steepness. We would then head down to Bealach Eadar da-Bheinn, turn west to meet the Benmore Burn and head home along the landrover track - just like Walkhighlands route but without Stob Binnein. It would be a nice circular walk with no complications - excellent plan for a mature gentleman like me who posesses a lot of common sense and more energy than I am entitled to.

Then I broke my own rules. Do not over indulge the day before a walk - I did and spent the evening at a dinner party sampling all sorts of beers and whisky and feasting on overly rich food. Consequence - got to bed late and was up half the night eating rennies to get rid of chronic heartburn - not nice. I was therefore ill prepared for what the north-western slope of Ben More had in store for me.

Notwithstanding all that we set off in high spirits with the weathermen promising us an excellent day with early morning cloud dispersing fairly quickly. That went as planned - thank you MWIS. This walk was to take us a long time and I have to thank daughter for her patience with me.

We started walking at 8.50AM with the mountain looking decidedly misty. 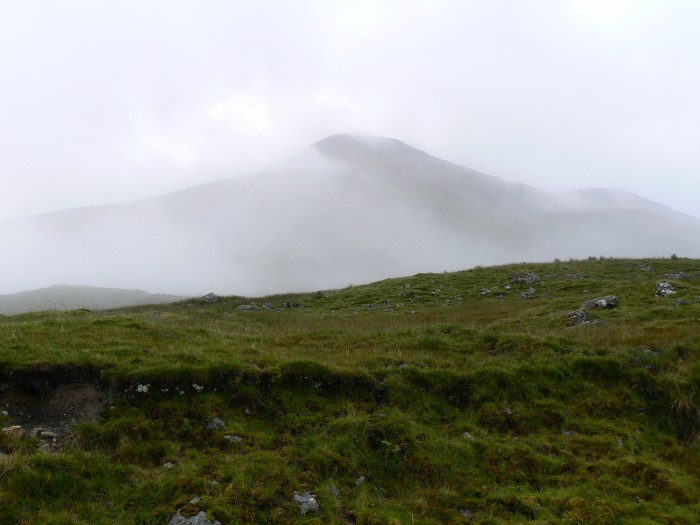 First view of our target

Up the track, through the gate and onto the hill by 9.08AM. There is a very boggy straight steep path on the lower slopes which made for uncomfortable and (in my case) strength sapping going but at least we were gaining height quickly. It was time for a few more pics looking back to our start point and another one of our target. Onward we trudged but the old legs were the first to feel the pain so frequent stops to view the surroundings, drink vast amounts of fluid and ease the pain were required - all under the pretext of taking pictures. Higher up the path is much better and drier, with lots of rocks on which to rest one's posterior, but always steep without respite - it seemed that the only change in the angle of ascent was when it got a little bit steeper. At about 850m I had just about run out of steam and to add to my other problems I began to feel sick. Daughter and I discussed the situation and I decided that she should press on and return the same way picking up my pieces as she went because I would rest for a while then make the decision to either press on or wait for her at this spot. My spirit had ploughed a new depth for old optimistic me and I was thinking that I had better give up this Munro climbing before it kills me. A deep depression was upon me and daughter had not gone long when, in trying to be sick I broke the biggest burp I had ever done or even heard before and the relief was immediate - the strength returned to my entire body, the depression vanished and the optimism returned but I was angry with myself for getting into such a situation. However in my annoyance I thought 'Ben More you ba---rd, I'm going to get you'. So digging deep into my determination and taking my time I headed for the top and it wasn't long before I spotted daughter on the sky-line heading down. I signalled for her to wait there and soon caught up. She assured me the top was very close and indeed we were soon there. At that point I felt rather pleased with myself but even though I was knackered I still had to take a few pics at the top including the mandatory high fives. At the top we rested, fed ourselves and messed about a bit. The scenery in all directions is magnificent and to maximise our enjoyment of the moment we stayed there quite a long time. We discussed whether to continue our route as planned or to return the same way but there was no real decision to make - the views to Stob Binnien and down into Benmore Glen were so magical that we were reluctant to turn our backs on them. Besides, the psychological boost of reaching the top of Ben More, the refreshments at the top and the relief of the biggest burp half way up the mountain had made a new man of me. And so it was onwards towards one of the finest views to be experienced on this walk - Stob Binnien and Bealach Eadar-da-Bheinn. 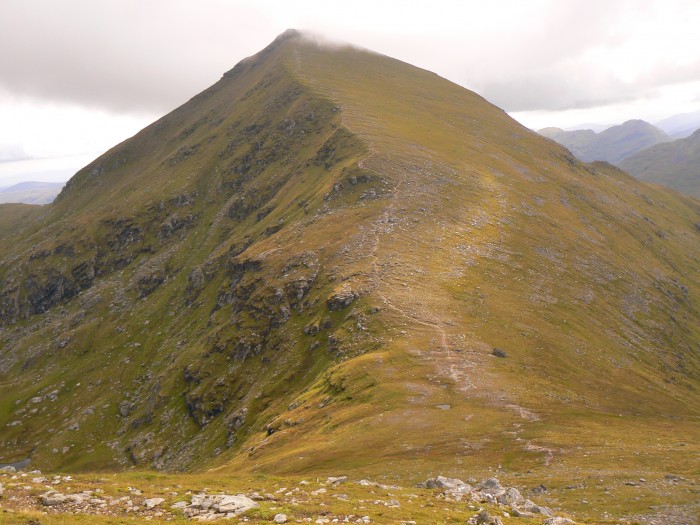 On arriving at the bealach it was time for another wee rest and refreshment. We then picked our way west through boggy grass for a couple of hundred metres to pick up a path by the stream which tumbles down to Benmore Burn. Head straight down there

This descent is quite enchanting as the burn hurries and splashes its way over a number of waterfalls with the path in close proximity all the way down. [attachment=0]Way off the bealach from below.jpg Down in the Glen you are into bogland again (more wet grass than bog really) but the path is clear and the extended track is soon reached with some relief. Normally at this point the walk out can be a bit tedious but on this occasion I was clicking my heels and thanking my big burp that I had not given up. Everyone enjoys the relief of breaking wind but this one was rather special!!!

In the event we spent rather a long time on the hill (over 7 hours) with frequent stops but, apart from a short uncomfortable spell, every moment was enjoyed. As for that ascent from Benmore farm - I think it deserves its reputation however this old fool would do it again - no fool like an old fool!

Oldman
Click to mark this as a great report. Register or Login free to be able to rate and comment on reports (as well as access 1:25000 mapping).


A lot of miles behind them


Location: Cambuslang
Occupation: Retired Weatherman
Interests: Family, walking, music from folk to country to classical
Activity: Bird-watcher
Pub: any quiet pub
Mountain: any
Place: out of town
Gear: GPS/Compass/Maps/Camera
Member: none as yet usually walking with friends or family
Camera: Lumix Panasonic
Ideal day out: I'm up for anything. If the company is capable I'll try anything, if not I'm just as happy with a quiet ramble