The Ridge of Glen Trool

I'd bookmarked this walk for a long time, but never had found the moment to actually walk it. I'm a regular visitor to Glen Trool, and like most, had been drawn to the colossal form of Merrick. So finding myself with a day off, I set off early for this long awaited Ridgeline.

The route follows the southern upland way for a short time, before branching off to pass Caldons House. There is a roughly trod path through bracken, presumable made by the inhabitants of the house. I did feel as if I was trespassing on someones garden, but persevered with the path and to my relief soon gained height as it passed at the base of a deer fence and following Caldons Burn. The going is tough and uneven and I imagine if this walk was done in high summer it would be quite unpleasant with the bracken.

The path emerges onto a forestry track and branching left to keep on the west side of the burn, it proceeds uphill with the plantation on the right and the burn on the left. There were many points at which to sit by the river, and I even considered a quick dip in one of the beautiful, waterfall backed pools. The views back to Benyellary and Merrick continued to improve as height was gained. 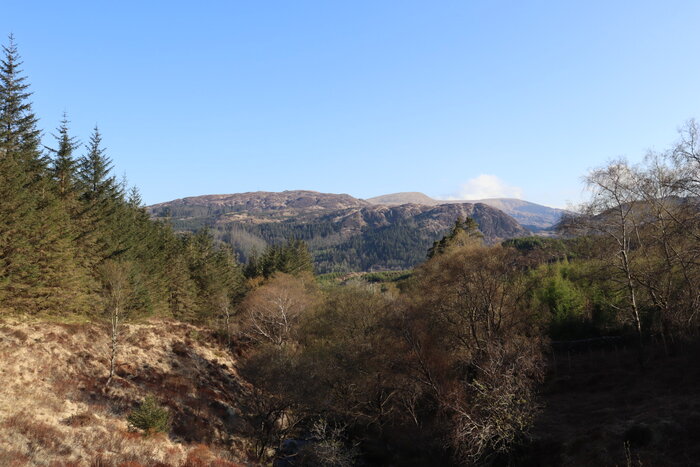 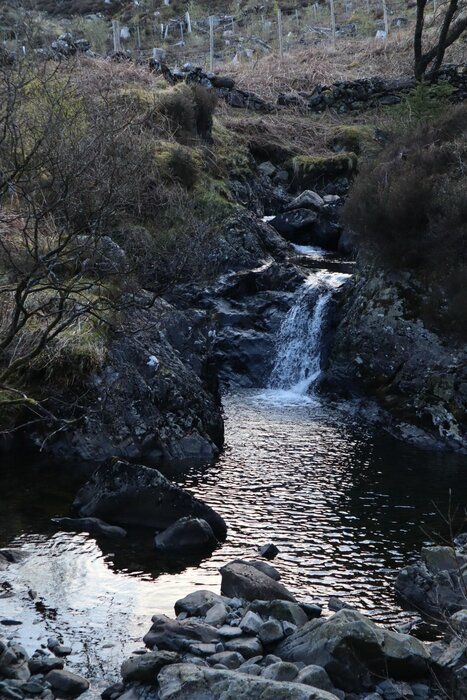 Some beautiful pools and waterfalls at Caldons Burn

The path was tussocky underfoot but not overly difficult as it was quite dry, and navigation was simple as I followed Caldons burn until a stone dyke was reached. I emerged onto a forestry track where many trees had recently been felled beneath Craignaw and followed this for about 200yrds before continuing along the west side of Caldons Burn.

The path gradually gets steeper and once the plantation starts to get thinner the vistas really open up with views up towards Lamachan and Larg Hill, and westwards towards Ailsa Crag, faintly visible. A stone dyke is reached again, and crossing the burn the path follows the dyke all the way to the summit of Lamachan. Looking westwards on approach to Lamachan

The view from the top is stunning, with panoramic 360 degree sightlines. The clouds and patches of broken sunshine made an already dramatic landscape even more so, particularly towards my next summit, the gnarly Curleywee. The wind had started to pick up, rolling in from the sea and there was a real icy feel. So donning another layer and some gloves, I set off along the rocky and grassy Ridgeline, Merrick standing imposingly on the far side. I stopped briefly on Bennanbrack, sheltering in a small nook to get some flapjack and tea down me, all the while marvelling at the views on Merrick and its outliers. It was so refreshing to get a different perspective of the place I thought I knew. Brew with a view I continued onto Curleywee, and the path descended quickly to its base. From here its a short, sharp incline to the summit, and its pretty much a make your own way route. I reached the summit, and with the wind now hammering into my back, I quickly took a couple of snaps, before heading quickly down to White Hill, hoping Curleywee would offer some shelter, which thankfully it did. From here there was no obvious path and in mist/cloud, navigation would be quite difficult. I would recommend heading down towards the White Laggan bothy, linking up with the Southern Upland Way, rather than trail find your way towards the loch as it is very tussocky and steep. I was lucky it was dry but my descent was challenging so it was with relief I found my way on to the southern upland way/7 stanes track with the iconic axe head. Following this well made track, I reached the Bruces stone and simply followed the way markers back to my starting point, delighted at having traversed the ridge line I had always wondered at.

The Storr, a new perspective

Activity: Mountain Walker
Pub: Seamus' Bar, Sligachan
Mountain: Bruach na Frithe
Place: The Isle of Skye
Gear: Buff
Member: The National Trust, National Trust for Scotland
Ideal day out: A walk that encompasses a beach, a mountain, a loch and terrific views. Somewhere I can have a brew with a view
Ambition: All the Munroes