Foinaven: Four jewels on a string of scree

I've commented before that there seems to be a rule about Foinaven: you don't get to complete it unless you really want to. At least, that's how I chose to interpret my previous experiences on the hill: in 2010, four of us set off on a fine summer's day, only to be beaten back by driving rain and fog on the first hill. 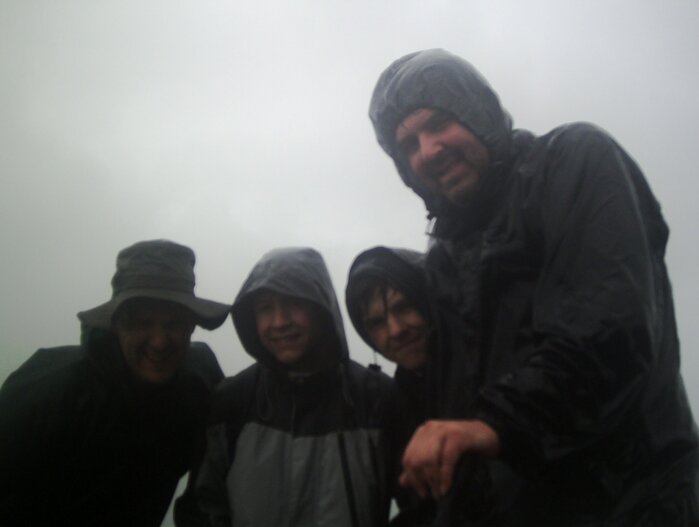 Three years later, two of us got as far as An t'Sail Mhor and turned back, being short of time and (in my case at least) fitness. 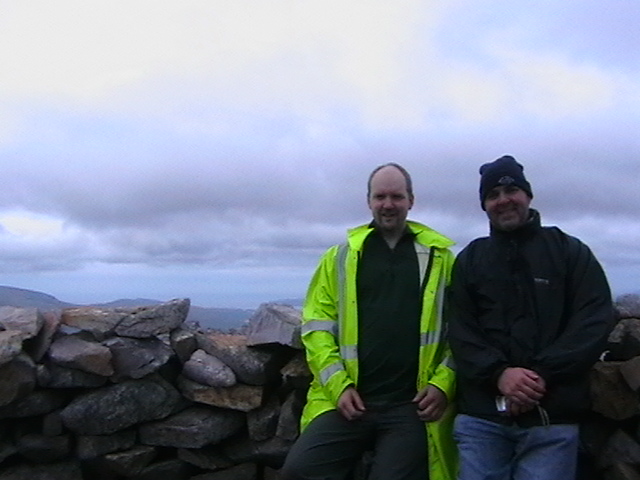 Some places are worth coming back to... ptarm and ptarm igan.


Last week, sensing a disturbance in the force (or one dry day in the forecast), I set off alone, sleeping in the car park to get an earlyish start. Next morning, Arkle had its head in cloud but the rest of the area looked clear - in fact the weather was similar to my last visit. 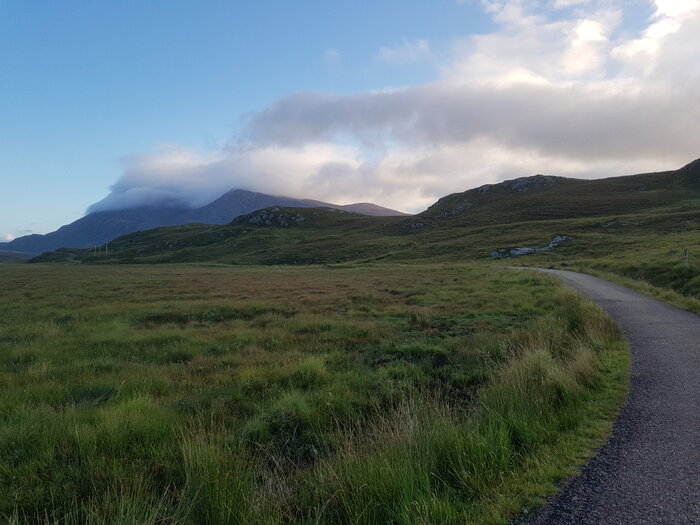 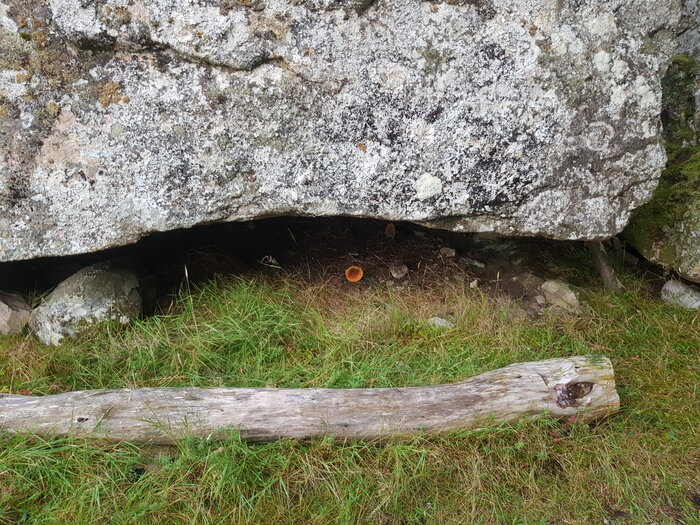 There was even another crop of fly agaric under the Arkle Gate, but it looked a bit tired. This time I met a large squadron of keds in the Lone woods, but carried on past them, past Arkle, and on to Bealach Horn. 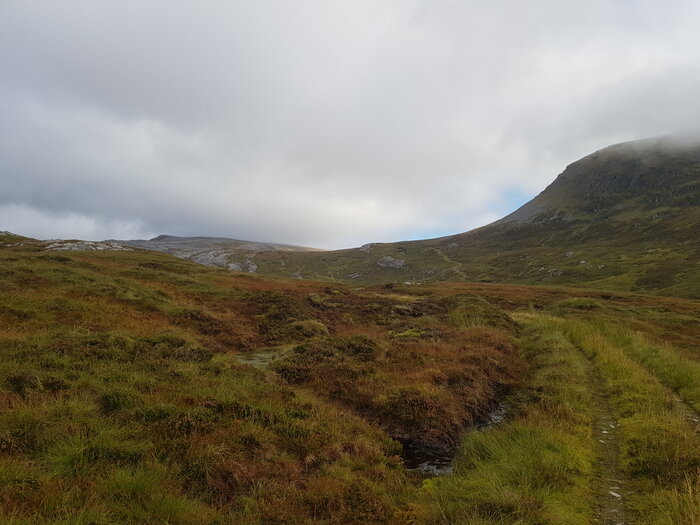 Looking between Arkle and Foinaven

I skipped the first peak and went stright on to Stob Cadha na Beucaich. 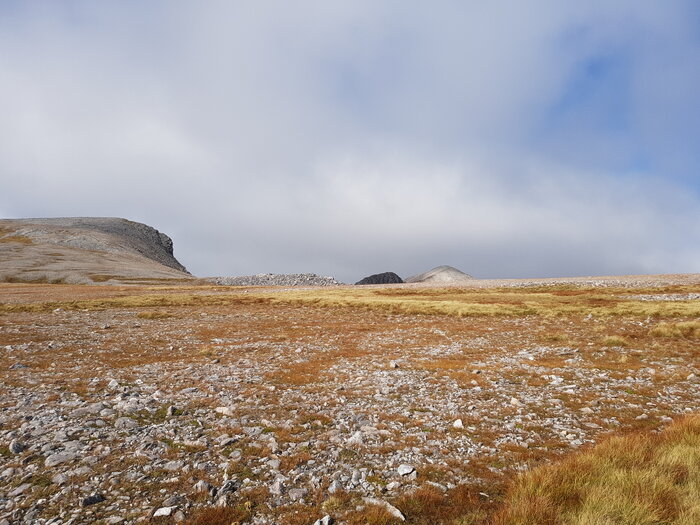 The path wasn't visible from that side and I remembered how narrow and treacherous it had looked from Arkle, but the way became clear eventually - and apart from falling stones hitting my feet, it was a surprisingly easy descent. Here was the legendary* shelter cairn - it looked like a fine shelter for a hobbit, or might even serve as an old-style bread oven if anyone could be bothered to bring enough wood.
*I'd read there was one up here.

I decided in advance that if I was going to do this ridge it deserved a proper celebration, so I sat in front of the cairn and mixed up a few ingredients to give them time to ferment. While sitting there I saw a pair of birds circling near Lord Reay's Seat - fortunately they were ravens, not vultures, so I deemed it safe to continue. 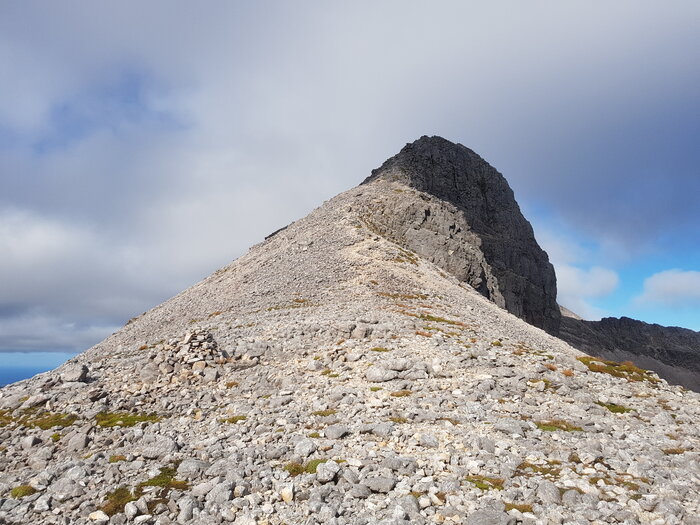 For some reason the next ascent felt the most exposed of the lot - even though the previous section, moving scree and all, had felt perfectly safe. I decided I'm really not a fan of ridge walking but plodded up steadily, stopping every now and then to look down the slopes and remind myself it wasn't as bad as all that. Following what looked like the main track, I skirted around Lord Reay's Seat and carried on to A' Cheir Ghorm. By now the clouds had risen and the whole of Foinaven was clear. 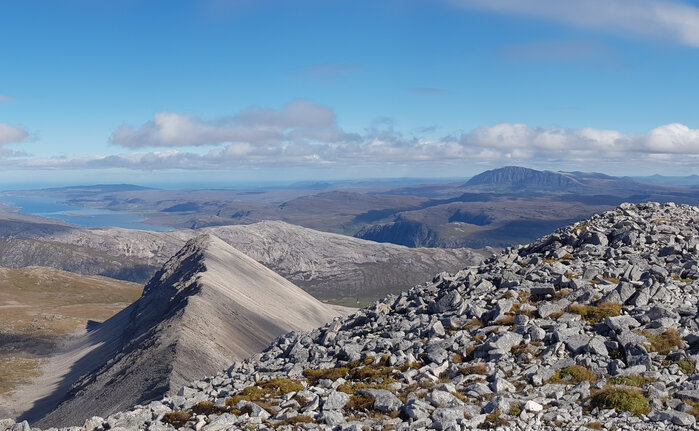 East towards Ben Hope from A' Cheir Ghorm, including the side ridge 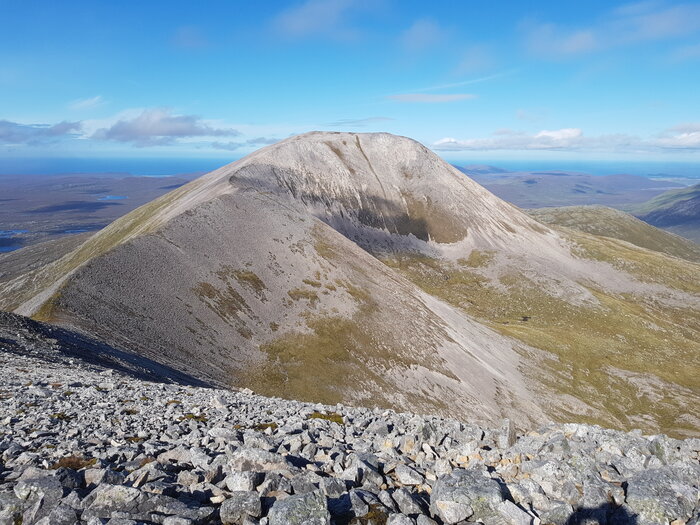 The ridge from there to the main peak, Ganu Mhor, was the longest and narrowest of the day, but somehow felt a lot less exposed than the preceding one. I still hadn't quite made peace with ridges, but the slopes each side were smooth and safe-looking, and the walk easy and relaxing. Ahead I could see a couple of black silhouettes on the peak, walking between the two cairns and apparently enjoying the view. By the time I arrived they'd disappeared.

The landscape was clear for miles around. I'd recognised Ben Hope and the Griams early on, and was surprised how close the latter looked from up here. Ben Hope and the east cairn of Ganu Mhor 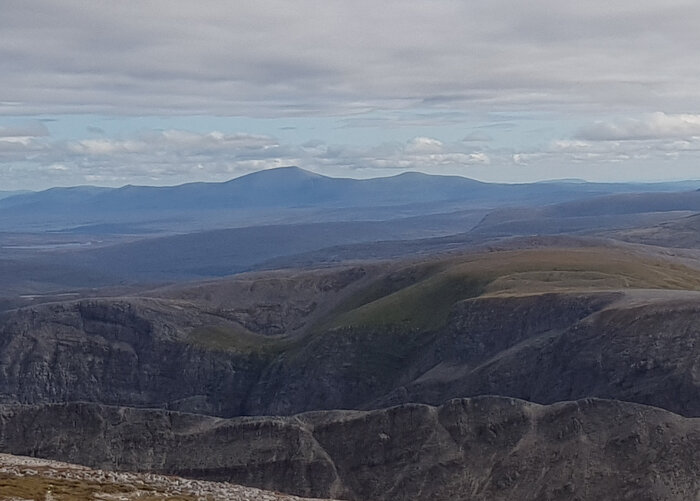 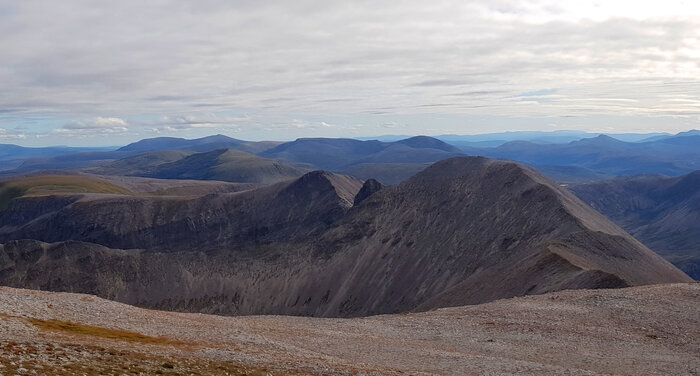 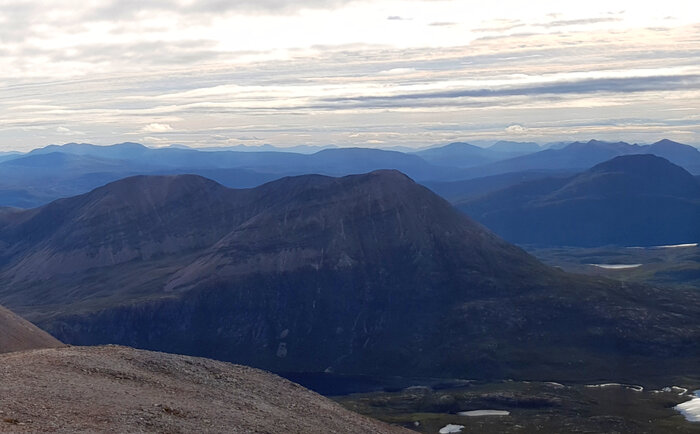 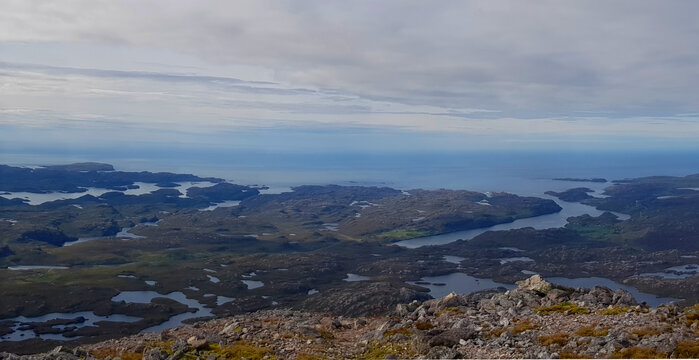 Some of the north coast 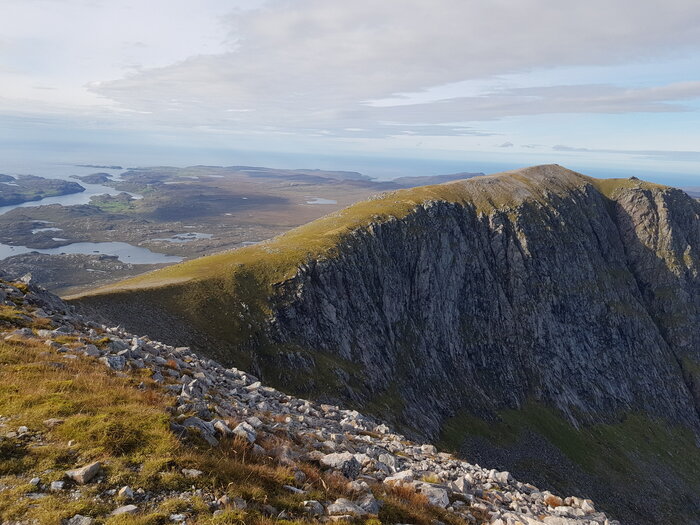 Ahead to Ceann Garbh I felt rewarded several times over for the effort of getting there. The superbly crinkly coastline never gets old, and seeing some of the best parts of the country from a new angle was a real joy. There was a slight breeze but the summit cairn provided shelter for the stove. After a while I was joined on the top by a couple of walkers, but they didn't come over to the cairn until I'd cleaned up and moved on. Maybe they caught a whiff of cheese and thought I'd taken my socks off.

The walk to Ceann Garbh was easy going, and I carried on down and sat for a while on the slopes, watching the odd car pass on the distant A838 and a whole lot of nothing happening in between. 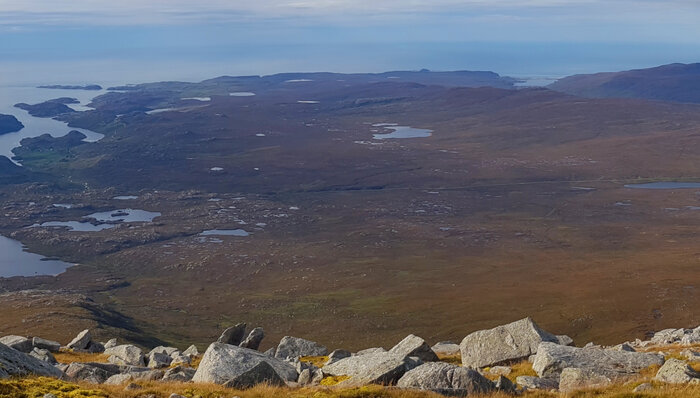 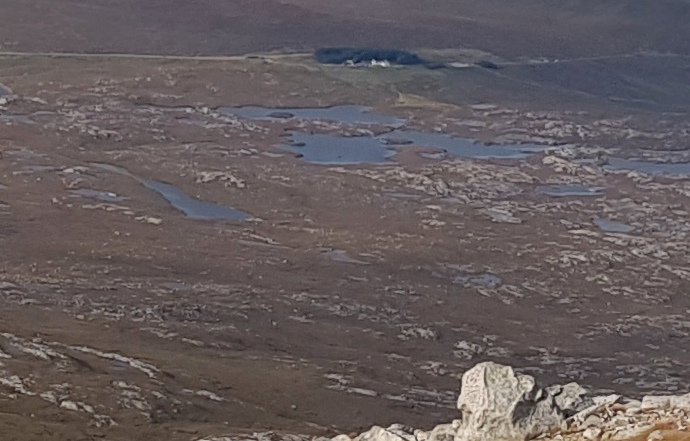 Eventually thirst got the better of me, and I found a tinkling burn to refill my bottle before squelching across the moss to the road and the end of my journey. 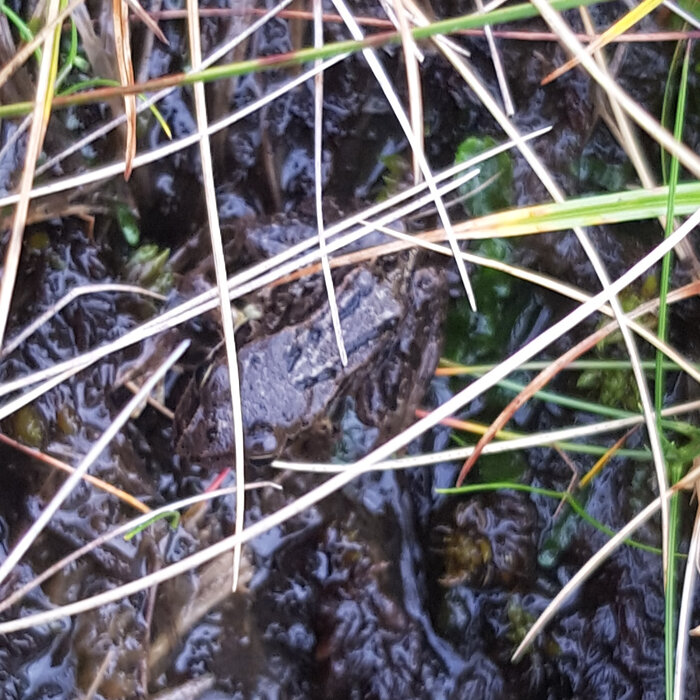 Plenty of toads on the road, but only two tiny frogs on the hill. This feller(ess?) was on the way down. Well, not quite the end - there was still a cycle ride back to the car, thankfully mostly downhill. The wind and rain closed in just before dusk to make it more interesting - somehow the hills managed to channel it into a headwind almost all the way

- but it was nice to sit down and let gravity do some of the work.

Thus ended my traverse of Foinaven - the hardest hill I've been on for many a year, and worth every step of the way. I'm glad I went for the full traverse: airy ridges or not, the hill has a huge amount of character and deserves to be appreciated.


track-16-09-2021_19h05-21s.gpx Open full screen  NB: Walkhighlands is not responsible for the accuracy of gpx files in users posts
Click to mark this as a great report. Register or Login free to be able to rate and comment on reports (as well as access 1:25000 mapping).


Shortest night of the year on Beinn Ratha

What does Spotty eat?

Wondering around the Foyer