Oh god where's he been now? No wait come back, this one's good! Dom is a huge mountain in Switzerland, in between Saas Fee and Zermatt. At 4545 m it is the highest mountain entirely in Switzerland (there are a few higher peaks but they're along the border with Italy) but it's not especially hard to climb. Guidebooks tend to rate this as PD- or PD with a short section of scrambling on the Festigrat. The biggest challenge climbing Dom is the lack of any ski lifts, cable cars, trains or buses, meaning you need to climb the entire thing from the valley below, starting at Randa (1406 m).

Dom, seen from the North (Wikipedia):

Dom from the Nadelgrat (Wikipedia):

The normal route zig-zags up the big blank snow face, approaching the summit from the right. Note the avalanche debris at the foot of the face.

First, you need to climb up to the Dom hut at 2940 m for an overnight stay. This starts off as a simple hike, but gets steeper and more technical, with an extended section of scrambling and via ferrata: 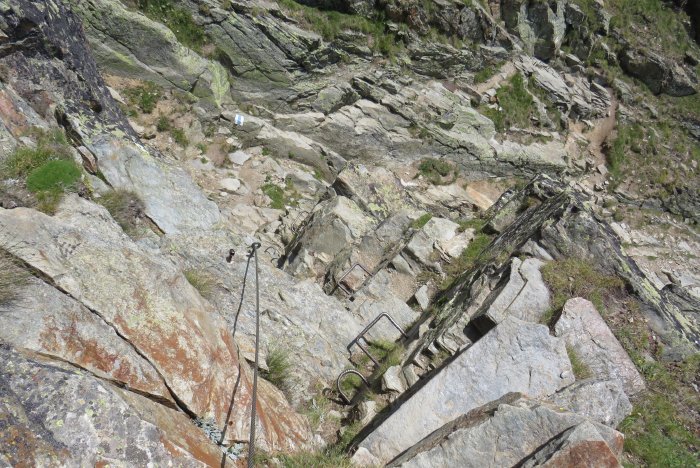 I reached the Dom hut at about 4.30 pm, 3 hours after setting off from Randa. I'd arranged to meet my guide, Englebert, at 6.00 pm, but my dinner time at 6.30 he'd still not turned up. When he did arrive it became clear there would not be much conversation. Despite the German sounding name he was Italian and spoke fairly limited English (compared to my completely non-existent Italian). His only description of the route was "we go slow". Not the best start, but I thought I would reserve judgement until the climbing I set my alarm for 2.30 am and was up for breakfast at 3 am, enabling us to start out up the mountain at 3.30 am. Obviously it was pitch black, so the following photos were taken on the way down. The route starts with a hike up glacial moraine, before walking up the Festigletscher (glacier). Then a section of easy rock climbing leads up to the Festijoch ridge: Once at the crest of the ridge, it's snow all the way. Unfortunately this starts with an annoying downclimb which was bad enough on the way up, but horribly tiring on the return journey. By now, the sun had come out and it was clear we were in for a fantastic day. The route zig-zags its way up the enormous North flank of Dom without much difficulty. Around half way up we left our poles and continued with ice axes only. There was one slightly awkward step that involved an icy ledge no wider than one boot width. Around this point I realised I was having trouble speaking. I seemed to be slurring my words and was worried I might be suffering from the effects of altitude, or even worse, having a stroke. But then I realised my face was so cold my lips had gone numb. No wonder I couldn't speak properly! Once we were out of the shade my face warmed up and the problem went away 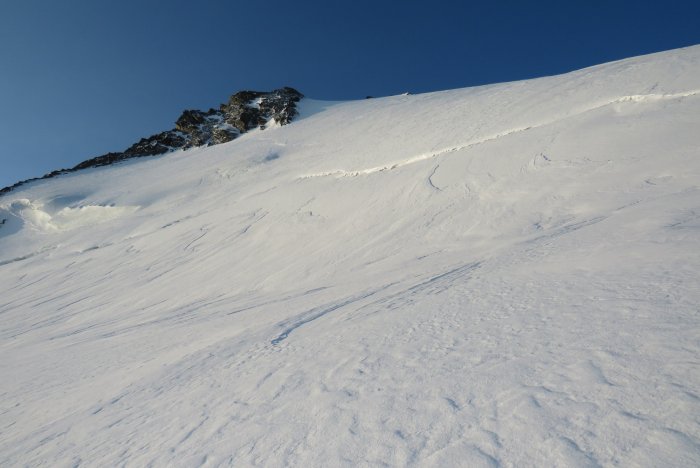 The final section of the climb was a steep snow ridge, perhaps around 45 degrees. Not difficult or exposed but very tiring. Finally, we reached the summit at about 8.45 am. Unusually, the summit is marked by a crucifix, rather than a plain cross: In the above photo, the Margherita hut can be seen on the summit of the Signalkuppe on the left side of the massif. This is the highest building in Europe (4554 m, higher than Dom) We stayed on the summit for about 10 minutes, then started to descend. Despite my initial reservations, I'd really warmed to Engelbert. I found him to be an exceptionally patient and reassuring guide who always seemed to make the right call. Looking back up towards the summit: A climber on the Nadelgrat: The downclimb from the Festijoch was the last technical challenge of the day. Again, Engelbert was superb and very reassuring. He offered to let me abseil down but I prefered to downclimb it and managed to get all the way down without incident

. Readers of my other reports will not be surprised to hear I had problems with my crampons coming off. This has been a persisent problem over the years

I thought I'd fixed it by shortening the bars, but the left crampon came loose three times. I give up. The next time I buy new crampons I'm going to get the normal C1 type without the lever at the back.

Almost back at the hut: We made it back by about 12.30, so a 9 hour round trip from the hut. Some people stay another night but I really wanted a nice comfortable bed and a shower, so I rested for half an hour and descended alone back to Randa. I think it took me about 2 hours to get to the train station. Rather than going straight back to Geneva, I took the train to Zermatt and stayed one night there. I felt I'd earned a night in a luxury hotel and even got a room upgrade

Dinner was at McDonald's though