I have climbed Lank Rigg on about 15 occasions, each time 'alpine style', in a single 2 hour round trip without bottled oxygen or sherpa support. I am the Kenton Cool of Lank Rigg, which makes me the primary authority around these parts. I have put together a summary of the main routes up and down the hill, most of which I've walked in the last 6 months.

General description
Lank Rigg is a huge dome shaped hill surrounded by the River Calder to the West and North, and Worm Gill to the South and East. A shallow col links it to Whoap, which leads to Iron Crag and Crag Fell. It's defended by a kind of 'moat' of bogs on it's lower slopes on the West side. Further up, these bogs become patchy before eventually giving way to dry ground on the upper slopes. Invasive bog rushes cover the wettest areas, making them easy to identify and avoid. Stay clear of the rushes and you should be OK, although the ground can become very soggy after heavy rain.

If you're driving, there's a small amount of parking at the trail head on the Cold Fell road. Failing this, there's more parking down the hill near the stone circle or near Lowther Park forest. For public transport users, the nearest bus stop is probably at Wath Brow. You can reach the trail head by taking the path between Dent and Flat Fell, then joining the coast-to-coast route up to the stone circle. Route 1:
This is often used as a descent by people combining Lank Rigg with Crag Fell, Grike and Lhotse. It is the easiest route, both in terms of effort and route finding. It is drier than some routes, but not entirely bog-free. The large section known as White Esk is often soggy after heavy rain, and the following section passing below Whoap is also boggy in places. Some people go over the top of Whoap, rather than down the valley, but the lower slopes of Whoap are also very boggy in places.

The main issue, other than the bogs, is river crossings. There are two; the first over 'Stinking Gill' just before it joins the Calder, then after crossing White Esk, you must cross the Calder itself. The second crossing is much more difficult, especially after heavy rain. At some point, there were probably stepping stones, but these have been washed away. It's usually easier and safer to cross further downstream (near an old sheepfold) where the river is gentler and less rocky. If you fall in here you'll just get wet. Fall in further up and there's a good chance of banging your head or getting swept up in the current. Walking poles are a huge benefit here. It's worth bringing one specifically for the river crossing. Approaching the first crossing with White Esk and Whoap behind

The second, more difficult crossing, with Whoap ahead: After you reach the col between Whoap and Lang Rigg, it's an easy plod up an increasing gradient to the summit, which is just after the steepest part. Route 2
This is a compromise between Route 1 and Route 4. It's a semi-direct route that cuts a bit of time off and largely avoids the bogs (it's probably the driest route on this side of the hill). To be honest, it's really only any good as a descent route. As an ascent, it's hard work and less interesting than Route 1.

About half way up, there is a small pile of stones that looks unlikely to be natural. There are various features of ancient civilisations marked on the OS map on the South side of Lank Rigg, but nothing on the North. It's possibly a burial marker*.

*There are legends of dead climbers being left on Lang Rigg, including one known as 'Green Boots' on account of the wellies he was wearing to cross the bogs**. I wish to stress that there is no truth whatsoever in these rumours and that the overall summit to fatality rate for Lank Rigg remains very low.

**I made this one up myself

When descending, it's best to aim for the point around 100 m upstream from where Worm Gill meets the Calder. Again, avoid the rushes. There are places in which Worm Gill can easily be crossed in a short stride. Any joy is short lived though, as the bogs here are especially nasty on the other side

. And you need to cross the Calder again Route 3
This is the driest route but requires the most effort to reach in the first place. Instead of bogs and rushes there are large patches of bracken and even scree. It's one of the remotest places in England and is very rarely visited. Most people who combine Caw Fell with Lank Rigg will cross over Iron Crag before making the easy traverse over Whoap, joining Route 1. When I was a youngster, in a characteristically poorly planned trip, I pushed my bike all the way along Iron Crag in the snow, up Caw Fell, then down to Worm Gill. I can't remember for sure, but I think I then climbed over Lank Rigg, but may have taken the track round the East and South side to join the main road at Cold Fell. There is a small water intake works where Bleaberry Gill meets Worm Gill. It's mentioned in Wainwright's guidebooks and the inside of the small building is covered with graffiti from people with names like 'Tony' and 'Geoff'. I visited this place a few times on my bike when I was younger. It's every bit as spooky as in was back then. There's a little fireplace in one corner of the hut, so presumably people were based here for at least a day at a time, or possibly sleeping here. I've probably climbed Lank Rigg from this side a couple of times, but I'm not the only one. A WH report by Trailmasher also describes ascending from this side after descending Caw Fell. Recently, I noticed an interesting looking gorge (Hole Gill) while walking over Iron crag and thought it might be worth exploring. After I climbed Haycock, I walked over Caw Fell and followed the length of the crags on the North side down Bleaberry Gill to the intake works. From here, it's a short walk through thick bracken to the start of Hole Gill. 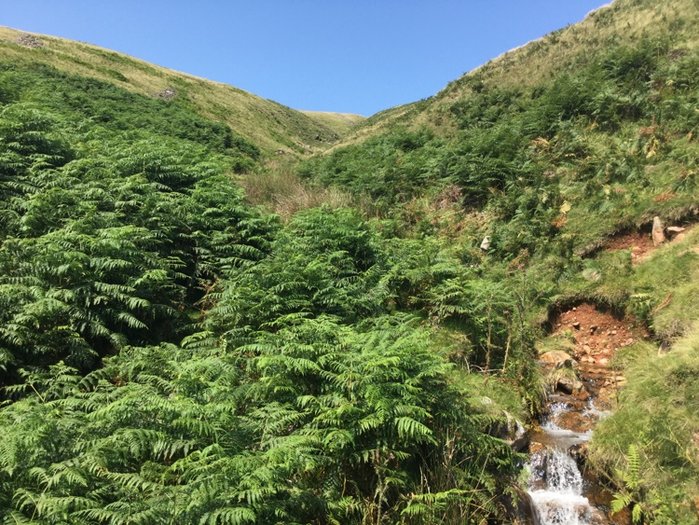 Near the top of Hole Gill, there is a small craggy section. I made the mistake of trying to climb it and came close to disaster. I climbed about half way up, but couldn't get any further and turned back. In the process I pulled off a huge chunk of the rotten rock, which smashed over my knee. Somehow, I only sustained minor injuries. Broken bones in this area would not be a good thing Route 4: The Direttissima
I have long wondered if there may be a route through the bogs on the North West corner of Lank Rigg, allowing for an elegant line of ascent. On one occasion, I thought I'd found it when descending, getting to within about 100 m of the River before becoming mired in bogs and barely managing to escape. The problem is, even if you do survive the bogs, there is no easy way to cross the river at this point. I managed to get through the bogs but lost my balance crossing the river (no poles) and got a soaking

A further major problem is the extensive area of tussocks interspersed with the bogs higher up. These are extremely frustrating to walk across and there is a serious risk of twisting an ankle. It's either the bogs or the tussocks. There's no easy ground in this area

Route 5
I have much less experience of the South side of Lank Rigg. I climbed this route when I was a young child with my parents once. They spent much of the walk cursing 'Arthur bloody Wainwright' on account of AW's confusing maps. It was another 20 years before I realised he was actually called Afred.

As mentioned earlier, there are a number of ancient sites in this area, including homesteads and field systems. These are described extensively Here

There's also 'Matty Benn's Bridge', which is given its formal name 'Monks Bridge' on OS maps. The nickname comes from Martha 'Matty' Benn (1831-1888) who would often ride over the bridge on horseback while drunk.

As a closing remark, just remember Lank Rigg is a seriously tough hill with a low success rate. Even highly experienced roped-up parties, trained in bog rescue techniques and with full base camp support have failed to reach the support. Remember the hill will always be there next time, bogs and all.

A comedy of errors in the Salzburg Alps