Via ferrata: my journey to the dark side!

For those that don't know, via ferratas are the device of the cloven hooved one, designed to allow non-climbers the chance to climb difficult routes and cliff faces. Purist mountaineers and climbers often hate them, but they're insanely popular in Europe. Via ferratas always feature a steel cable bolted onto the rock at regular intervals, and usually various other climbing aids such as U-shaped metal stemples, small footplates, simple metal pegs, ladders, cable bridges and balance beams.

To climb a via ferrata route, you need a harness, a helmet and a set of via ferrata lanyards. These are usually in a Y-shaped arrangement, with two carabiners at the ends and a shock absorbing unit at the 'stem' of the Y. The central principle of via ferrata climbing is that you're always clipped into the cable with at least one of the two lanyards. To get past a cable attachment point, unclip one carabiner and clip it onto the cable on the other side of the attachment, then do the same with the other.

A Camp 'kinetic' via ferrata set with a shocking absorbing section: 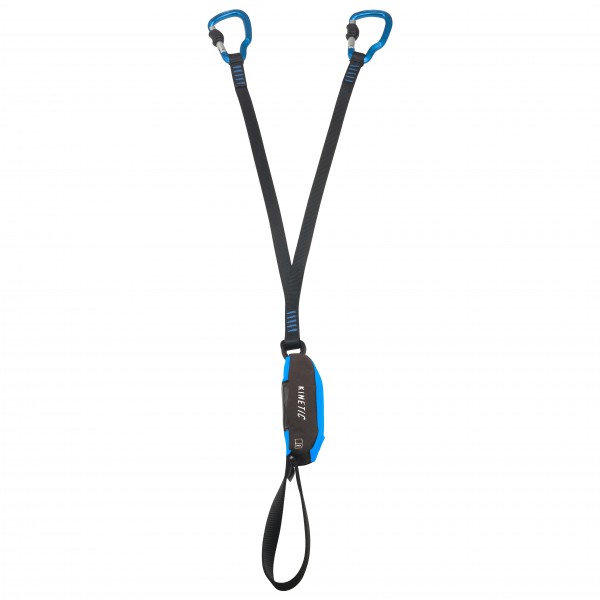 There are only a small handfull of via ferratas in the UK. As far as I can tell, all are commercial operations and cost money to use. In contrast, via ferratas are everywhere in Europe (there are about 50 in Canton Bern alone) and are almost invariably free. They are put up by various groups including local tourist boards, climbing groups and sometimes companies like Mammut.

I have put together a short report of the first five via ferratas I've done, all of which are in Swizerland except for the Jacques Revaclier, which is over the border in France.

Champery: Via ferrata de Tière
My first experience of via ferrata climbing was the via ferrata de Tière, on the lower slopes of the Dents du Midi (Valais). The route is split into two parts. The first is a fun and easy climb up among some waterfalls, including a couple of wobbly bridges. The second part is more comitting, and much more exposed.

The first section begins with a very easy walk along a path alongside the river: Then a short climb up to the first of two bridges: The second bridge is much longer and more exposed. In both cases, the base of the bridge is not attached at the ends, meaning it can sway about. The second part of the via ferrata starts after an easy walk along a cable protected path. After a short climb up you reach the final headwall. This involves a traverse under a small overhang, up to the point where the girl in orange is, then a climb up, followed by a traverse back above the overhang: The photo below is looking down on the section above the overhang. The stemples were wet and I had a minor slip on one but managed to hold on. Mont Saleve: Via Ferrata Jacques Revaclier
The Jacques Revaclier via ferrata is located just outside Geneva, on the French side of the border. This is a really strange route. The first part is nothing more than a path with a cable alongside: When you reach a little cave with a memorial to Jacques R, the nature of the route changes abruptly. You find yourself edging out around two thrids of the way up a cliff and the sense of exposure is seriously unnerving

I reached a little spike of rock and looked down at the trees about 60-70 m below. "I can't do this" I thought to myself. In fact I probably said it out aloud.

I stood there for about 10 minutes wondering what to do. I'd decided to give up, but didn't actually turn around. The strange thing was, despite the huge drop, I felt quite secure attached to the cable. It was just the thought of going further up that bothered me. Eventually I started moving again, going up not down. The route climbs up a few metres, then crosses a shallow cave (short cable bridge) then climbs a short overhanging section before an easy climb to the top. I was pleased I'd managed to find the courage to finish the route but continued to find the exposure unsettling. I lay awake that night plagued with 'what if' thoughts, imagining myself plummeting down after forgetting to clip in

Leysin: Via ferrata Plan Pratz
The Plan Pratz is a very popular via ferrata located 10 minutes walk from Leysin (Dougal Haston's home town). This is a very different route to the others and rather typical of the new breed of 'sports' via ferratas being built in the alps. It's not exposed but it's much more technically demanding. Rather than climbing up, the route mainly involves traversing across a large rock band in the woods. The big problem with the Plan Pratz is evident from the photo below: both climbers are leaning back. In fact large portions of this route are overhanging, not by much, but enough to throw your centre of gravity behind your feet requiring you to use your arms to pull yourself forward. This is OK for a while, but quickly becomes tiring, especially when you need to clip and unclip the lanyards. One nice thing about this route is that it has 2 'escape points', meaning you are not committed to finishing the whole route. I needed to leave at the first escape point to apply some first aid to a bleeding finger, and also managed to get some rest. I set off again, and within about 30 seconds the plaster started peeling off. That's what you get for keeping hold of red cross plasters with a use by date that was probably in the last century Back on the rockface, the route continues over a couple of bridges and then climbs up again: Next there is a second escape point (down a wooden pole with ladder rungs) before the route climbs up towards the first of two ladders. Both ladders are of the outward facing variety, meaning you need to climb facing away from the rock face. They feel exposed but are technically easy and are much less tiring than the rest of the route. In between the ladders, there is a sustained section of overhang. By now I was getting increasingly tired and there was no opportunity to rest my arms. Eventually I felt an overwhelming sense of fatigue sweep over my arms and after a few seconds my hands let go. I didn't fall. The lanyards simply took my weight, with my feet still on the lower stemples. I waited for a few minutes for the feeling to come back in my arms, before pulling myself back up and continuing to the ladder at the end. Afterwards I wandered down to the cemetary to look for Dougal's grave. He was killed in an avalanche on La Riondaz in 1977 and is apparently buried here. I walked around the whole site but couldn't find him. The Swiss 'recycle' graves, but surely 44 years was too soon? There were a few headstones that had fallen into disrepair and were unreadable. Perhaps one of them was his. If so, it seems pretty remarkable that one of the greatest climbers of all time could be lying in an essentially unmarked grave and forgotten about

Grindelwald: Schwarzhorn klettersteig
Via ferratas are knowns as klettersteigs in German. The Schwarzhorn (also called Schwarzhoren) was one of the reasons why I took up via ferrata in the first place. Although there is an easy hiking route up the mountain, there is a much more interesting looking route that leads along a long ridge, beginning with a series of ladders bolted to the rock: Note that all photos of theses ladders makes it look like they are leaning to the side. They aren't. It's just a trick of perspective. The first set of two ladders begins after a short scramble up some rocks: The second set of three ladders: Actually the ladders were much less exposed than I'd expected. The biggest problem is the need to keep stopping to clip and unclip the ferrata lanyards. Since the last climb, I'd bought a pair of belay gloves at Decathlon. These looked good, but I soon discovered they are no use for via ferrata because the fingertips kept getting trapped in the carabiners and preventing them from closing properly. After the first set of ladders I took them off.

Once at the top of the second set, the cable continues most of the way along the summit ridge. This was very easy and I mostly just walked along without clipping in. To be honest, the Schwarzhorn is probably the easiest via ferrata I've done and has the added bonus of including a 2928 m summit with great views of the Bernese Oberland. If you're in the Grindelwald area, there's another via ferrata route on part of the north face of the Eiger called the Rotstock. It looks fun, although I've not done it yet.


Saas Fee: Mitaghorn klettersteig
The Mittaghorn is probably my favourite via ferrata I've done, so far. It's more of a protected scramble than anything else and is fairly easy and unexposed throughout. Most of the climbing is done on rock and there is only a handful of U-shaped metal stemples and pegs. The main problem is the altitude. Climbing between 2687 m and 3142 m, it is noticeably more tiring than the valley routes and there's an increased risk of the weather turning bad and snow/ice on the route.

The ferrata leads along the ridge on the right in the photo below: I walked to the beginning from Saas Fee, but the easiest way is to take the Alpin Express cable car (you get a free pass if you're staying locally) to the first stop and follow the klettersteig signs from there. A vague 'Alpine wanderweg' (blue/white markers) leads over very rocky terrain up to the start of the ferrata, marked by a large flag. The photo below shows one of the most awkward sections, involving a scramble up a groove in the rock. Notice the lack of other climbing aids in the photos. I could see the ridge stretching away and it looked like I was hours away from the top. But then I realised I was actually looking at another mountain entirely, Egginer, and after one short climb up a steep slab equipped with stemples and pegs I was on the summit. The summit is marked by a huge aluminium cross. From here, you can descend a steep footpath down the east face of the Mittaghorn, then north to Plattjen and then down to Saas Fee. I was vaguely intending to also do the new via ferrata that's been put up behind the nearby Brittania hut, but the Mittaghorn had taken too long and I needed to get back early to visit the guides' office. Overall, a superb day out and good acclimatisation for nearby 4000ers (I climbed Allalinhorn a couple of days later).

After completing these five via ferrata routes I can certainly see the appeal, although I'm more interested in the 'mountain' routes like Schwarzhorn and Mittaghorn that involve reaching an actual summit. As well as being fun, I feel like my climbing and scrambling confidence has increased and I'm less bothered by exposure than I was previously. The question is, could non-commercial via ferratas ever catch on in the UK?
Click to mark this as a great report. Register or Login free to be able to rate and comment on reports (as well as access 1:25000 mapping).