INTRODUCTION
After trials and tribulations on the Tyndrum 4, I decided to go right back out for another 4 Munros the next day (Monday 26th July). The plan here was to start with Ben More and Stob Binnein from Crianlarich, before traversing to Stob Garbh roughly as described by Alteknacker for the Crianlarich 7. After following the ridge to Cruach Ardrain and Beinn Tulaichean, I planned to double back over Cruach Ardrain and follow the ridge path down to Grey Height, returning to Crianlarich through the forest. The forecast was dry and warm. I had a big cooked breakfast at the Ben More Lodge, and packed my bag. Because the bag had torn a bit the day before, I only packed 2 litres of water and hung my lunch sandwiches off the outside of the bag. This time, I made sure to pack my compass. 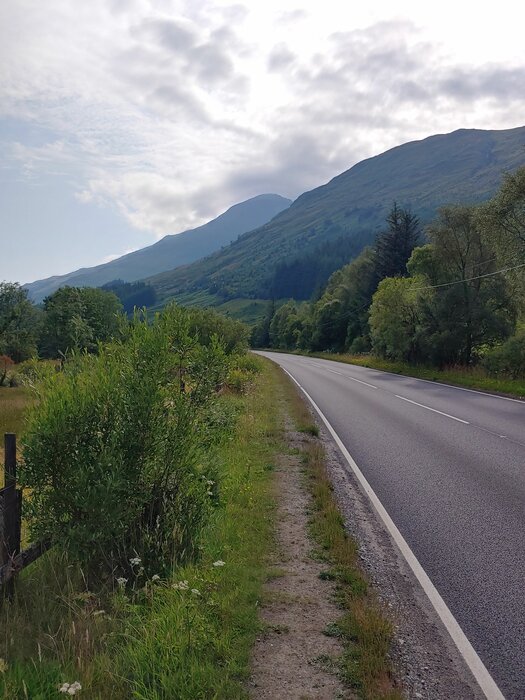 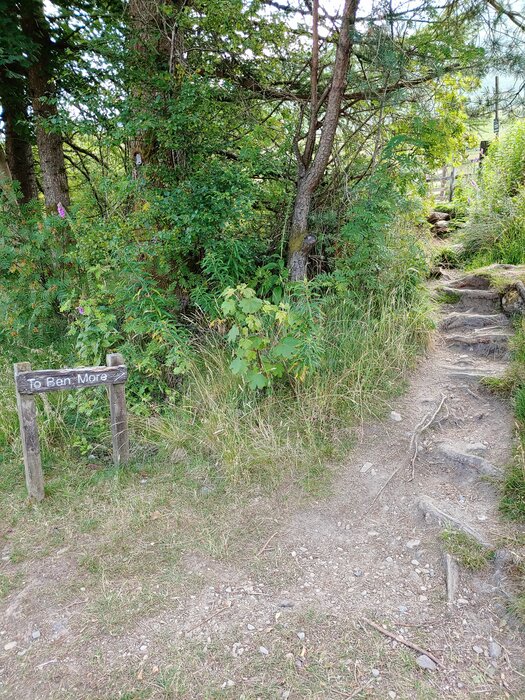 BEN MORE
I set out along the A85 at 9:40. The walk along the main road wasn’t particularly pleasant, but it was a flat section to loosen off the legs. A bit of breeze today made it feel pleasantly cooler than yesterday. For the sake of my water supplies, I was hoping this would continue. I reached the foot of the Ben More trail on schedule at 10:10 and started the climb. I have seen this climb described as relentless, but I was feeling strong and relentless myself and marched up the hill at a good pace, passing lots of folk on the way up. I briefly chatted to a young couple who were resting three quarters of the way up. They had only just found the path having slogged diagonally across the lush lower slopes for 2 hours. This was to foreshadow my afternoon, but more on that later. I kept trudging and reached the Ben More summit at 11:35. Conditions were lovely on the top and I met an older fellow with a big blue pack and two women who were just taking some photos by the trig point. They were all planning to stop there for a sit down and bite to eat but I needed to push on to Stob Binnein. 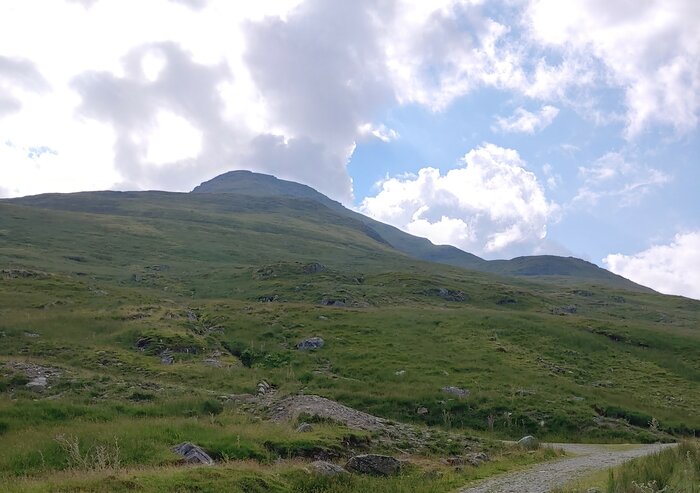 The Ben More climb - brightness ahead 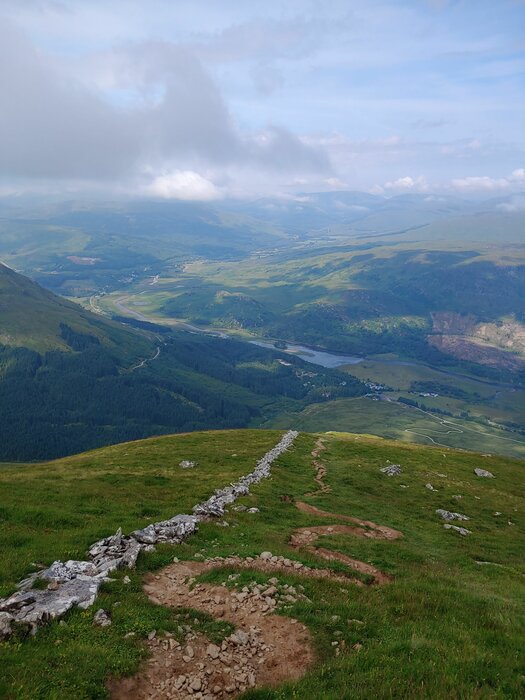 Looking back down the Ben More trail 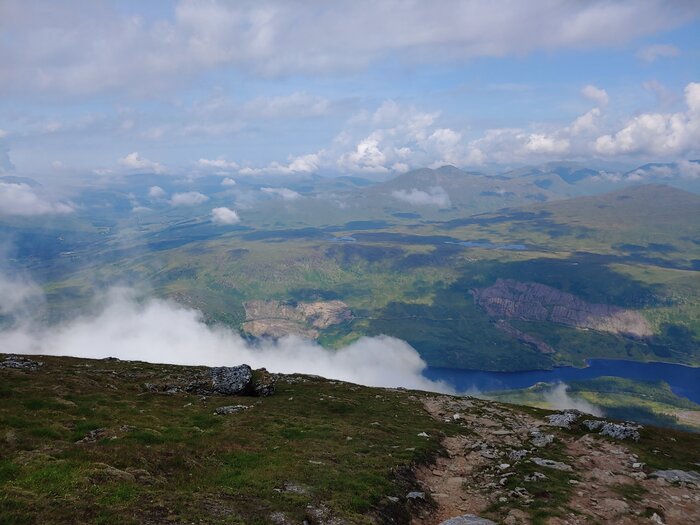 View from near the Ben More peak 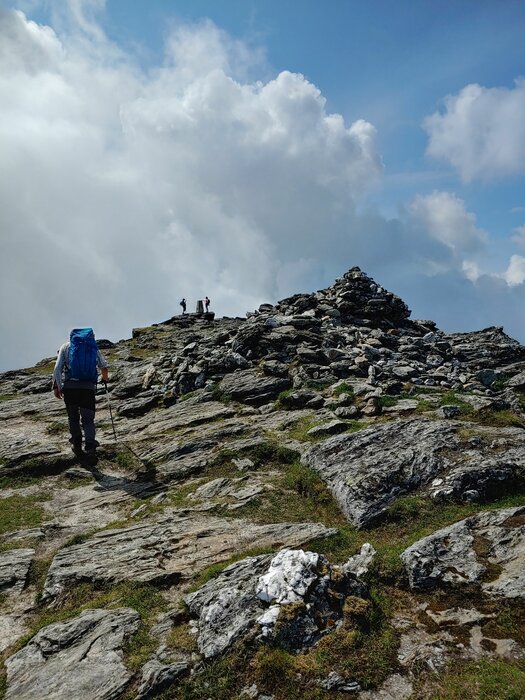 STOB BINNEIN
I ate some cashew nuts as I walked down to the Bealach. It was easy going. On the way down, I met a fellow who was having a rest on the way up Ben More from Stob Binnein. He said he was doing the same four Munros as me, only he had started from Inverlochlarig. We agreed that we’d probably meet again later, and I pushed on towards Stob Binnein. I was at the Bealach at noon and after a straightforward climb, I reached the summit of Stob Binnein at 12:30. So far so good. 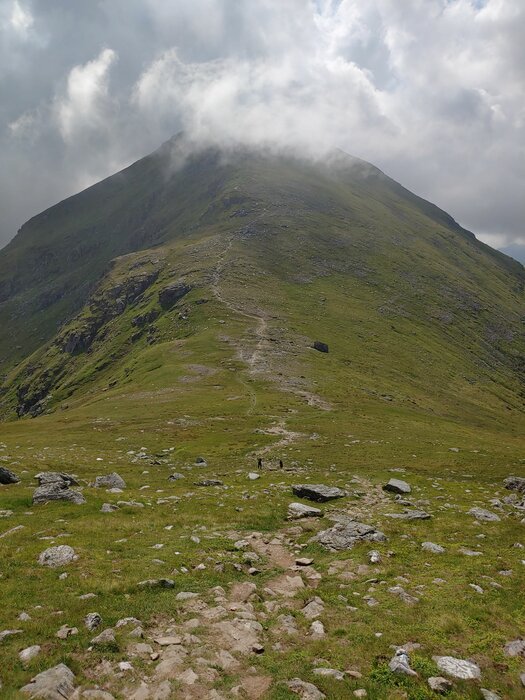 The Bealach between Ben More and Stob Binnein 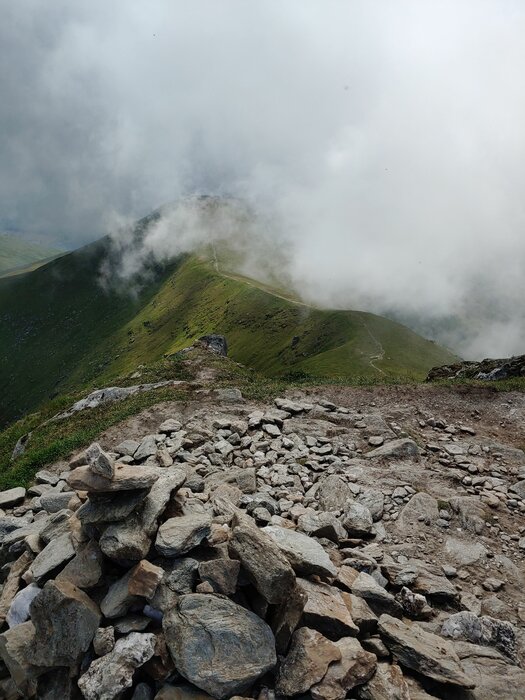 STOB BINNEIN TO STOB GARBH
On the way up Stob Binnein, I decided to backtrack to the Bealach between Binnein and Ben More before traversing to the much lower saddle point between Stob Binnein and Stob Garbh. The first part on the trail was easy as expected. I met the young couple again as well as the two women from the Ben More peak. They were all heading on to Stob Binnein before turning for home, and thought I was a bit mad heading to the valley traverse. It turns out they were not entirely wrong. 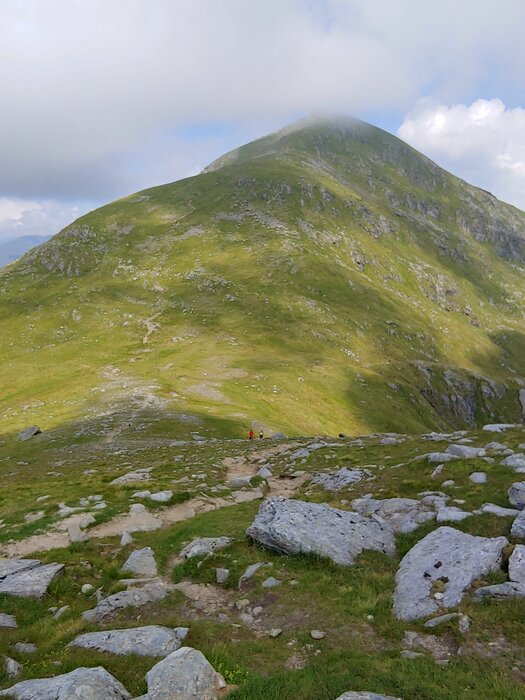 Returning to the Ben More Bealach

I am not sure if there even was a good route across the valley that day but I know I didn’t find it. The vegetation was thick, with lots of boggy areas and streams to navigate. I found myself zig-zagging while trying (and failing) to keep my trainer-clad feet relatively dry. Somewhere here, I spotted my second frog of the day and managed to get a quick photo. Needing a rest, I sat on an uncomfortable boulder half way across and ate my first sandwich. The sun was beating down. Twenty minutes later I reached the saddle point, sat on a more comfortable boulder and ate my second sandwich while contemplating the imposing slopes ahead. My trainers were full of grass seeds, and my feet were soggy. For the first time, I could really feel yesterday in my legs. I contemplated whether walking poles would have helped here. This climb was set to be a slog. 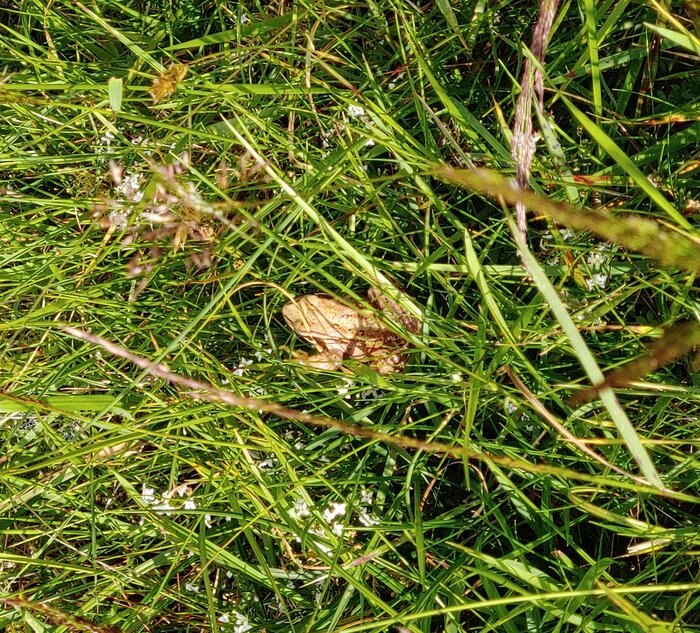 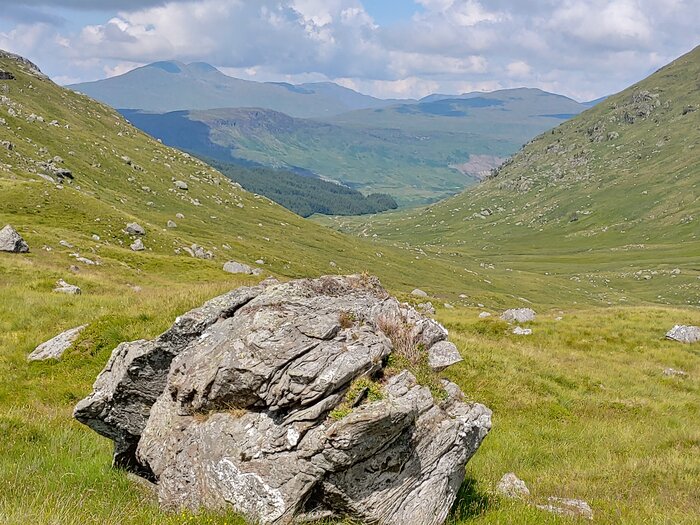 Lunching spot in the valley

I started to climb up the steep, grassy slopes of Stobh Garbh at 13:50. With soggy feet and tired legs, this was really hard work. I reminded myself that one reason for doing these multiple Munro hikes was to increase my fitness and toughness for Scottish Masters hockey. It should be hard work. This is good!

It felt like a longer climb, but I reached the top of Stob Garbh at 14:45 and stopped for a rest. I had been looking around on the climb for the other fellow doing the four, but hadn’t seen anyone since leaving the Ben More Bealach two hours earlier.

CRUACH ARDRAIN AND BEINN TULAICHEAN
I hadn’t seen a path for two hours either, but I now joined one on Stob Garbh that led gently down to the Bealach beneath Cruach Ardrain. This was a pleasant respite, and I was feeling tired but good. The final climb up to Cruach Ardrain from the North East was very steep, with a slippery, eroded path. I resorted to scrambling quite a bit, using whatever handholds were available. There were several sheep right up near the summit here and I felt like they were looking down at me while thinking ‘what is this human doing here?’. At some point on this steep section I finally spotted the fellow from earlier climbing up the slope below me. There would be time to say hello again in a while, and I pushed on to reach the Cruach Ardain summit at 15:25. Visibility was great here and I took a few photos and a panoramic video while I rested. 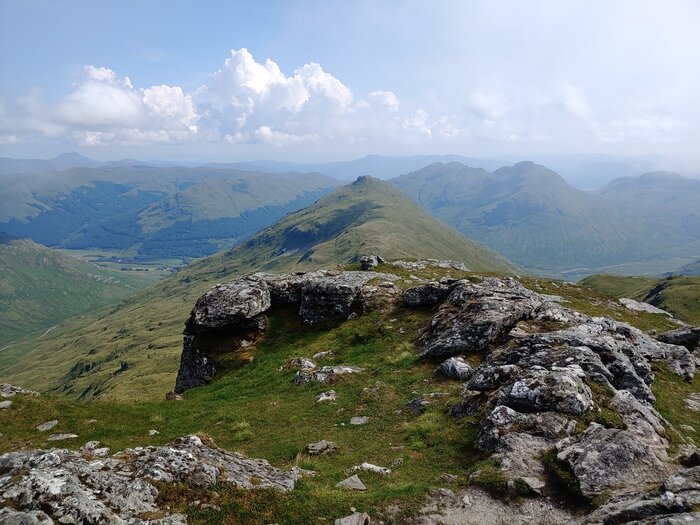 Heading on south towards Beinn Tulaichean, the ridge path was straightforward and pleasant. On the way down, I was surprised to bump into an old couple with a little dog (thankfully, on a lead). At 16:04 I reached the final Munro of the day and turned for home. I was down to my last 500ml of water but I thought that after one more push up Cruach Ardrain, it should be all downhill on trails back to Crianlarich. Long, but manageable. 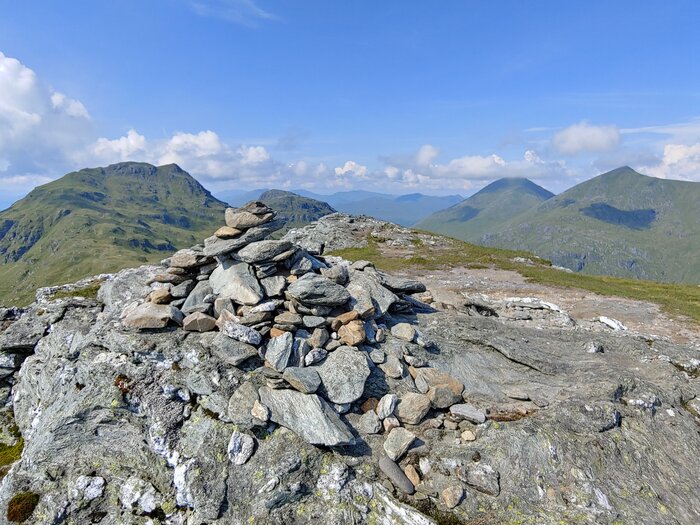 All 4 Munros from Beinn Tulaichean

THE RETURN
On the way back down Beinn Tulaichean, I finally met up with the other fellow doing the same four Munros today. We stopped to chat and compare notes. He was using walking poles but like me had scrambled up the top part of Cruach Ardrain. He said he had been thinking about my planned route, and was concerned that I still had a long and arduous return route ahead. I thought it shouldn’t be all that tough, provided the ridge trail was good (which I did not know). He offered to give me a lift round to Crianlarich if I descended to Inverlochlarig with him. I considered this for a few moments. On the one hand it felt like a cop-out, bailing out on my route. On the other hand, it would be nice to have a bit of company, and it seemed churlish to refuse. So, I accepted the offer, and we trotted down the hill together, chatting while we navigated the thickets of bracken. It turned out that this fellow, Yochanan, was a 61 year old ultra-runner who was doing these hills as a training exercise for an alpine event later in the year. I hope I am in that sort of shape at his age.

We reached the car at Inverlochlarig around 17:40 and drove on round to Crianlarich. I had no idea it was so far round by road and felt a bit guilty at dragging Yochanan out of his way, but he knew the local roads and part of it was also his route back. When we reached the lodges, Yochanan got a drink of water. I thanked him again and headed off for a shower before dinner. With thundery showers forecast for the next day, this would be my last walk on this trip. Job done.

If I were doing this walk again, I would favour heading south off Stob Binnein and look to plot a route across Inverlochlarig glen straight over to Beinn Tulaichean.

Plans for later in the summer include the Bridge of Orchy Five, the three near Inverarnan, and a two week trip to Braemar.
Click to mark this as a great report. Register or Login free to be able to rate and comment on reports (as well as access 1:25000 mapping).