New Years Day In The Bogs Of Beinn Chabhair!

What better way to start the New Year than heading into the hills?
No New Years resolutions, but a New Years target to hit 100 this year. Having climbed 36 Munros last year, this meant I'd need at least 37 this year. So, day 1, number 1!

Headed off from Edinburgh around 7am with Donna and Calvin. Appreciated the fact that daylight could be an issue this time of year, so chose a hill that I expected to be a comfortable walk within that time.

Arrived at Drover’s Inn car park and started walking at 9am. When Beinglas campsite was reached we veered round the field as I'd seen recommended, but I see no issue with walking down the main road as the stile is straight ahead this way (though I only realised this on the walk back). By following the field round to the side of the cabins you reach the bridge. Now, despite reading on WH of the many reports missing the stile or taking the wrong path, I too failed to spot it and headed over the bridge. Straight after the bridge there is a route to the left as opposed to straight on, which is the WHW route. This route on the left, heading up, can be followed all the way to a fence where there are a couple of easy places to cross over. This left us on the opposite side of the waterfall to the generally suggested route which involves crossing the stile at the rear of the campsite. (However, as we came down the other side on the way back, I have to say that I thought this route up was possibly not as steep a climb). We then more or less followed the burn, whilst negotiating the bog. Despite my doubts, turns out none of the previous reports were exaggerating about these bogs. At one point, our dog, Calvin, dropped into one which he failed to spot, and came back out black up to his jaw! A combination of walking on the south side of the burn, spending all my time looking at where I was placing my feet and obviously not paying attention, led to me failing to notice the burn separating into two streams and then following the wrong stream.

I was looking for the lochan and soon realised my mistake. We then had an unscheduled climb over the lower reaches of Parlan Hill to finally get sight of the lochan. Once over the hill, the bogs were even worse, and from here to the start of climbing Beinn Chabhair, felt like a never-ending slog with very slow progress.

Now that I could see where I needed to reach, I started to doubt whether there was enough daylight to get up and down Beinn Chabhair and back to the car. This wouldn't have been as much of a concern with a better walk back, but I thought in darkness, drowning in these bogs could be a distinct possibility!

After some deliberation, headed up to the summit, and this part of the day was straightforward. Arrived at summit, to be greeted with fantastic views all round. In fact the weather all day was much better than I'd expected, only a brief spattering of snow before starting the climb. The walk back was better around the north side of the lochan, though still quite slippy, with a few near tumbles! 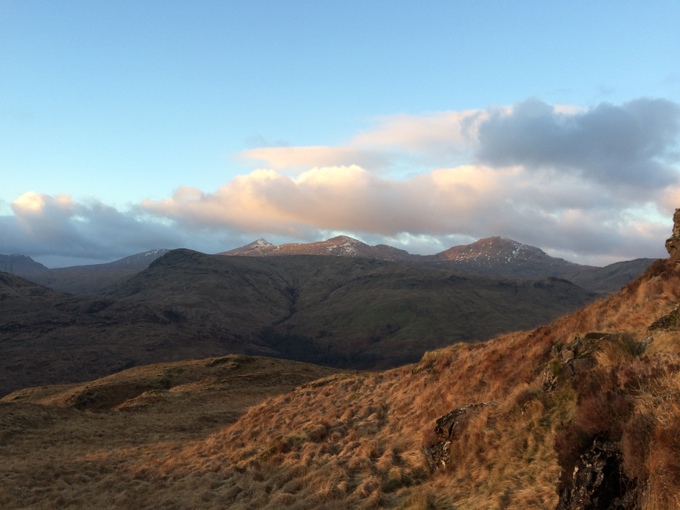 Down to the Drover's Finally made it back to the Drovers car park at 4pm with the last of the daylight.
Whilst I spent a good portion of time cursing myself for my navigational nightmare, it was a braw day to be outside and a great way to start the year.
Click to mark this as a great report. Register or Login free to be able to rate and comment on reports (as well as access 1:25000 mapping).