A walk around the the ruins of Glen Gairn

I recently bought a copy of a well known book called 'The Hills of Home', written by a former inhabitant of the old manse building in Glen Gairn (unfortunately now demolished), just north of Ballater, about life in the glen at the turn of the last century. Therefore, I thought it would be interesting to go for a bit of a wander. Most of the farms are now abandoned (although not all) so it has (in common with many Scottish glens) a fairly melancholy feel to the place, as it was a thriving community until relatively recently.

Anyway, it was a beautiful Autumn day so we borrowed a neighbour's dog and set off... The track to the kirk and old school Dog in mud... you will have to imagine the smell - it wasn't good. The ruined mill of Kirkstile The lochan above the mill Dalphuil Lodge - renovated as a picnic retreat (I believe) by Queen Mary and still well looked after. 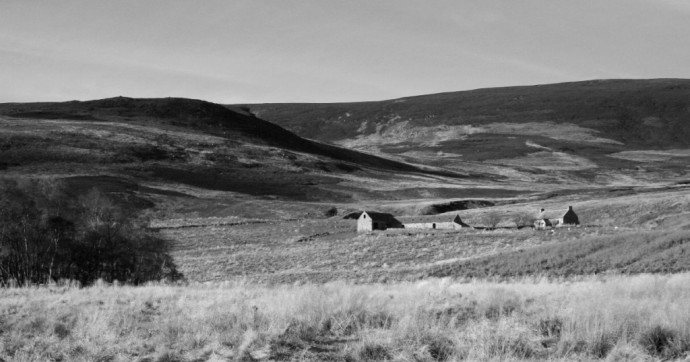 Old farm machinery - one of many bits of old machinery lying around, such as old horse ploughs, seed drills, etc. The remains of the old catholic chapel. This was apparently never completed due to the defeat of the Jacobites at Culloden. Apparently 24 men from Glen Gairn fought on the Jacobite side, mostly McGregors, 18 of which were killed. The remaining McGregors went on to suffer persecution at the hands of government troops. There are meant to be old McGregor graves in the area but we didn't look for them. Looking along Glen Gairn towards the River Dee Walking back from Inverenzie to Ardoch Ardoch steading (which has stunning views down the glen). There are the remains of a much older settlement here as well. View from within Ardoch steading The remains of an old lime kiln (I think) - there is another more obvious one nearby by the side of the A939. Limestone was baked to reduce it to lime, which was used on the fields. N.B. There are some really impressive ones on the coast near St Cyrus. The sun beginning to set, so time to get fish+chips. I thought I'd finish with 'rock of the day'. Within Glen Gairn there is an area where volcanic rocks have intruded through ancient limestone. This has resulted in contact metamorphism, where the limestone has been partially melted and new crystals have formed; in this case, nice big garnets (not gem quality though unfortunately).