Some background
While on a recent holiday to Spain I took my niece for a drive up into Sierra Bernia after a bite to eat we set off on a very ad hoc walk, using my Google Earth as our only guide (I know!). It was such a fabulous experience that I promised my best pal, resident out there in Spain, that I’d climb a couple of high hills in Scotland and come back to climb Puig Campana, a huge hill directly behind Benidorm

Research & Kit
Knowing that blundering around a hill in Scotland might not be the smartest thing to do, I decided to read up and get the necessary ‘gear’ together. I found that there were some hills in Scotland called Munros that were where the serious walkers went.
I found this site and started getting my gear together. Time and time again I read, don’t go on the hill without a map and compass (and the ability to use them) so I bought both, did a bit of ‘orienting the map, taking a bearing….’ home study, bought myself a pair of waterproof trousers and I was ready for anything Scotland could throw at me – or least so I thought.

Calling in a on a neighbour
Although I knew that we serious walkers did Munros, I thought I should start a bit nearer to home and walk the highest Ochil, nothing short of highest would do. I pored over Walkhighlands route map, my OS Explorer, Google Earth and read and reread your first rate Walk Description.
Although I must say that the compass and map I thought to be a little OTT – as far as I was concerned point south at the Forth Valley and nothing could go wrong.

And they say ignorance is bliss
So one Sunday morning off I went, totally ready for whatever the hill could throw at me.
Things didn’t go to plan from the start. Having learned the route by heart I was totally thrown by the glen pathway being closed. I had to retrace my steps and start climbing. This caused me concern on 2 fronts, the map once it left the easy to read outline of the valley floor became a spaghetti like mass of entangled contours lines and even more worrying I was struggling for breathe before I’d even drawn parallel to the quarry. 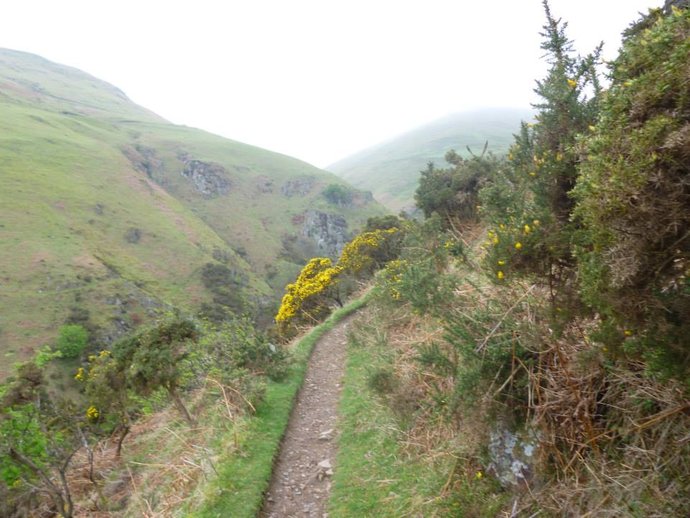 Magical walking along the top of the glen

But I struggled on regardless of the physical and mental pain. Walking along the path high above the glen and I was absolutely blown away: by the beauty of the hills, the solitude and the birds (no idea what species) leaping from treetop to treetop just below me. This brief pathway walk really was fabulous. I’d set out early and was totally alone – a bit selfish I know but as a Londoner I particularly enjoy solitude in public places.

I fought the Law and the Law nearly won
Peering into the map and comparing it with what I could actually see (that’s how these map things work) I realised that the Law started were 2 glens met, before my eyes such an apparition occurred so I crossed the footbridge and started up the Law in glorious sunshine.
This steady, breathless climb was absolutely awe inspiring, I’d lived 15 mins away from this for nearly 2 years and not realised what was on offer. I was pleased with my progress although the lungs and thighs were both struggling a bit, the sky was clear, sun was shining, so I stopped on a rock feeling very content with my Sunday mornings work, peering from near the top of this giant wedge onto the glorious sunlight hills flanking me on each side.

I start to hear voices
I plodded on feeling tired, but determined when my solitude was broken by the distant, vaguely audible sound of what seemed like women talking. Had my exertions pushed me to the point of auditory hallucinations? No it definitely was women talking, there they were over on the other side of the glen, running full pelt down the hill, seemingly not following a beaten path and talking as if on a Sunday stroll. 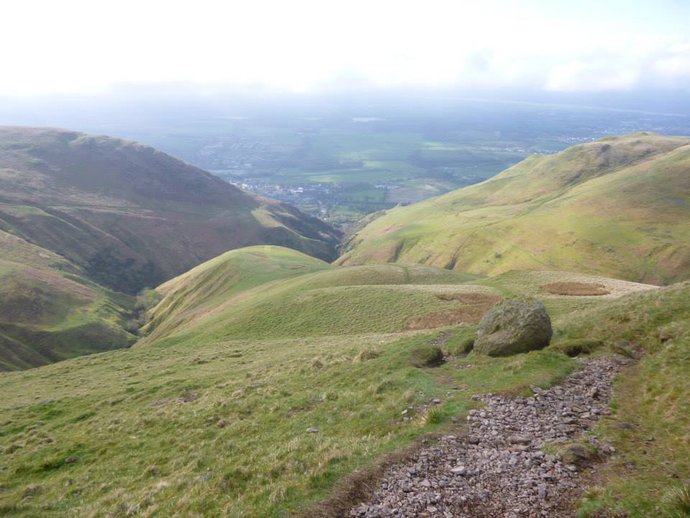 My breakfast table just prior to hearing voices

Weird stuff I thought to myself as I plodded on, pleased with my physical and mental fortitude and nearing the summit of the Law. Then to my horror these 2, not so young ladies, appear down at the bottom of the section I’m on and proceed to run full pelt up the hill, talking all the while, I affect as much nonchalance as I can possibly muster and stand to take the view – lungs rasping.
Note: fell runners really should not be allowed on a hill when unfit men of fragile egos are starting to feel like mountain supermen.

The weather turns
Having got a second wind once reaching the Law and following the excellent instructions on Walk Highlands, all the while keeping the cloud obscured fence on my righ, I made it to the top of Ben Cleuch. In very thick cloud, I literally couldn’t see more than 20 feet in front of me and was very glad of that fence – I admit without it I might have started meandering. 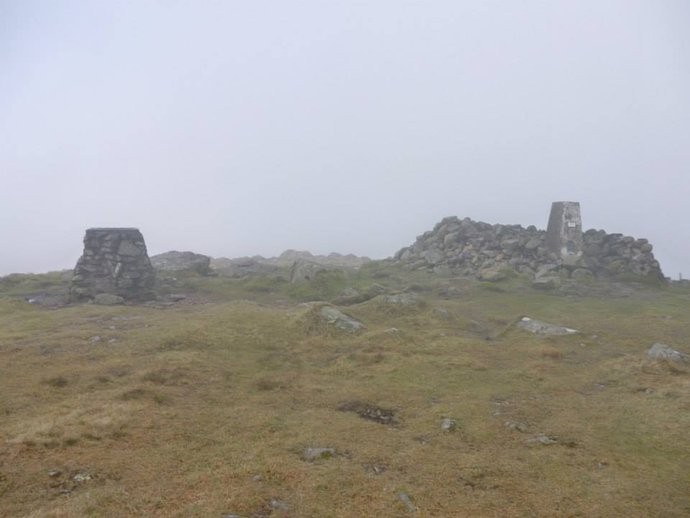 Cold, windy and without views - I felt exhilarated

Although the views weren't exactly great, I can't overstate just how fabulous it felt to have made it to the top under my own steam.
Another thing I must admit, I really could have used a woolly hat, luckily the coat had a hood but on the summit the wind was cold and biting – lesson learned.

A wrong turning – the map was necessary after all
I followed the fence and climbed the stile and started walking towards a hill I took to be Ben Ever, but something didn’t feel quite right. I oriented my map and found that the hill in front of me was directly north and therefore wasn’t Ben Ever but was in fact Ben Buck. So even in the civilised world a mile from the Tillicoutry I could easily have wandered off into the wilderness of the inner Ochills. This was a salutary lesson, in not respecting Scottish hills and their frighteningly changeable weather, poor planning and the sins of over confidence.
Anyway I headed back over the stile dropped 100 feet of so and found Ben Ever where it should be and in glorious sunshine.
I felt great to be out of the clouds, the wind and to have used a map for real (however ineptly), even being lapped for a second time by the fell runner – her mate must have gone home to lift weights or something- didn’t deflate me.

I gained the top of Ben Ever and stopped for lunch, Ben Cleuch still totally shrouded in cloud as I applied sunscreen to my brow – amazingly changeable stuff this mountain weather.
Walking along the top of the ridge was absolutely fabulous, with views back to the law and over the to Trossachs and even my home town of Stirling. 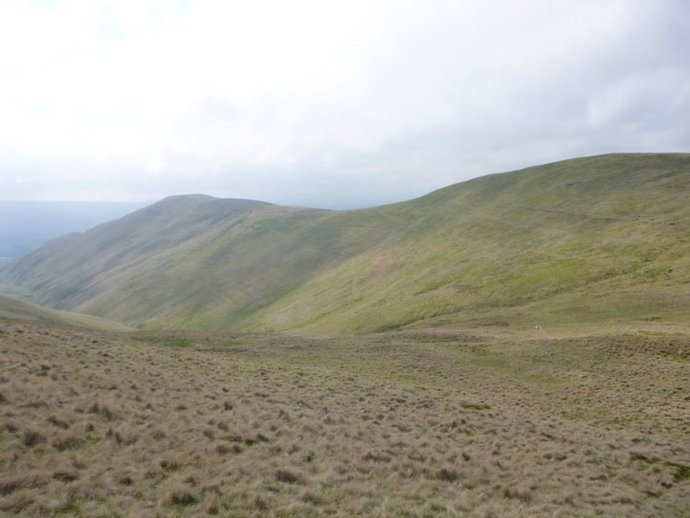 Ben Ever ridge - bathed in sunshine all the way

I followed the route down the ridge with a path not obvious in place until reaching the other side of the glen from earlier in the day. This I found particularly beautiful, taking a left when I hit the glen led me down a narrow path and then down to the glen floor where I found the only way to get back to path on the other side was by mounting the bench and crossing the tape ‘Do not enter – path closed’. I do hope I’ve not broken some hill bye-law!
Back to the car in Mill Street 4.30 hours – very pleased I hit the lower end of the estimated time.

Lessons learned
I need to buy a warm hat.
I need to learn how to use a map properly.
I need to properly plan a route with said map.
I should always respect the weather on a hill.
I really love hill walking.
Click to mark this as a great report. Register or Login free to be able to rate and comment on reports (as well as access 1:25000 mapping).