At the end of July Mr and Mrs Riverman arrived in the UK for our holidays. Having had our Easter break in Bavaria cancelled due to Covid 19 we’d scrapped any plans for far flung travel this summer. Instead, after a week at the Belgian seaside just after lockdown lifted here in Brussels, we decided that we would spend a fortnight in the UK catching up with family.

We arrived just in time - as towards the end of our first week the UK added Belgium to its mandatory quarantine list. First stop was Hampshire, where we spent a pleasant few days with Mrs R’s folks. We then headed up to North Worcs to visit my parents. Mrs R is now 7 months pregnant but still pretty active and we enjoyed some early morning runs along the Staffordshire and Worcestershire canal together. She returned to Brussels before me so that I could get a couple of days in Wales, which is easily accessed from my parents. My first day out was to Plynlimon.

I had prepared for this walk by reading the description in the Nuttalls book, starting from the reservoir side. However, for the sake of convenience I decided to start from Eisteddfa-Gurig farm on the A44 and pay the £5 charge for day parking.

Conditions were grey and cool and as I set off up the hill a fine rain was falling that grew heavier. On went my waterproof jacket (which I kept on the rest of the day) as I struck out west towards Y Garn. From there I had probably the only decent view of the day as I caught a fleeting glimpse of the ridge heading north. I set off along the pleasant ridge. I briefly spied the reservoir below me to the west but it was a shame that the visibility was so poor as I should imagine the views in all directions are stunning on a fine day. 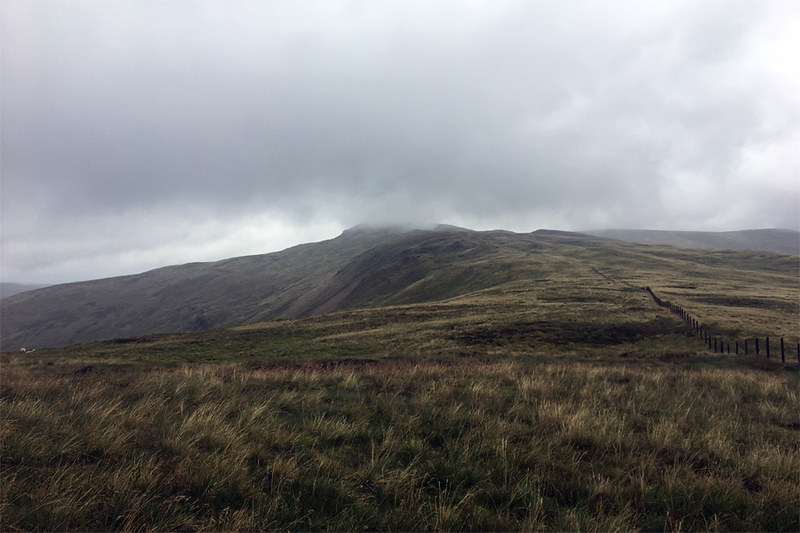 At the summit of Pen Pumlumon Fawr I huddled in the shelter to escape the increasingly strong wind and tucked into a sandwich. I heard voices approaching and was joined by a couple from Staffordshire. We chatted briefly before I headed off into the wind to bag the subsidiary top of Pulumon Fach. By now the wind was really strong and approaching gale force. With the rain as well the conditions felt more like November than August. While P.Fach is not a Hewitt it is nevertheless a worthwhile detour, affording interesting views of the northern corrie of the mountain.

Retracing my steps to P.Fawr I saw two other small parties of walkers neither of which followed me eastwards to Pen Pumlumon Llygad-bychan. I seemed to make heavy work of this section of the walk and the plateau-like terrain made it difficult to discern the highest point. Checking the GPS and the Nuttall Book I realised I’d probably missed the true top by a few metres and resolved to cross it on my way back after visiting the triple-cairned summit of Pumlumon Arwystil.

Along this section of the walk the wind did not relent at all. I paused again briefly at Pumlumon Arwystil and debated whether to continue north to try to visit the source of the river Severn. It would have been nice to do so as earlier in the week I had enjoyed a pleasant stroll in the sunshine along the banks of the river to the south of Bridgnorth. However, given the conditions I decided to save that for another day.

Retracing my steps westwards I used the GPS to guide me over the highest ground and was able to identify the summit of Llygad-bychan thanks to its proximity to a boundary stone, as described in the Nuttalls book. I then crossed the summit of P.Fawr for the third time in the day before descending south eastwards to the abandoned mine and farm track that would lead me back to the car.

All in all a great day out. My first proper walk since lockdown and my first time above the 2000ft contour since November 2019. A shame about the conditions but after all that time on lockdown I’m certainly not complaining.

On my last trip to Wales in November 2019 I was convinced that I’d walked all of the significant tops in the Berwyns. However, I had overlooked the cluster of hills nestled between Llyn Tegid and Lake Vyrnwy known as the Hirnantau. A foray to Foel Cwm Sian Llwyd in Spring 2017 did not give me high hopes for these hills. However, I was pleasantly surprised last week. They might not be the grandest hills in Wales but they are super, super remote. Also, the drive to the starting point over the top of the Hirnant pass is an experience not to be missed. 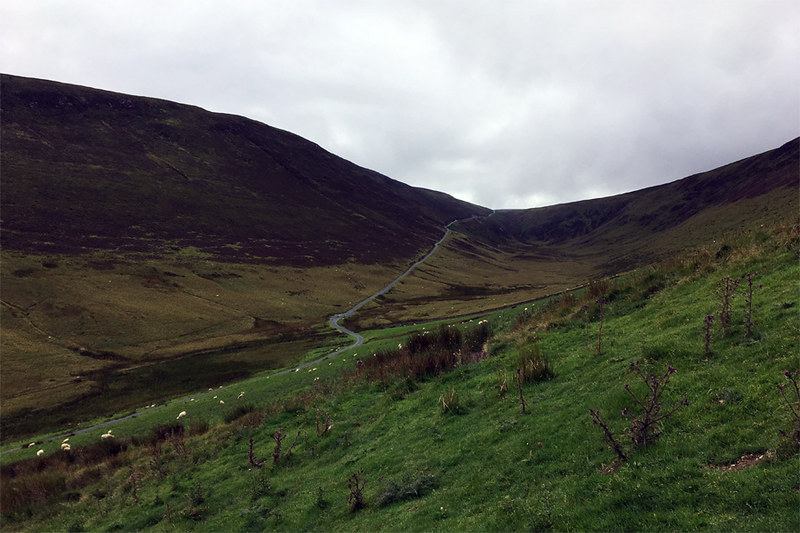 I approached from the south via Lake Vyrnwy. I’d passed signs for this reservoir dozens of times en route to Snowdonia but never paid a visit. Driving round the lake in the early morning light was a magical experience. While man-made, it’s still a wondrous place and the gothic water tower is particularly enchanting. I then continued north on the mountain road towards Bala. I crossed the Hirnant pass at around 500m (which I would cross on foot later in the day) and then descended, parking the car at the little bridge at the foot of the pass at the point indicated in the Nuttalls book.

The sun was out and the birds were chirping. I’d set off from North Worcs quite early and without having breakfast. So before setting off on the hill I enjoyed some hot coffee and snack bars, just taking in the views.

My first top of the day was Foel Goch. It’s a tough, steep slog from the road. The ground was also wet and increasingly boggy near the top, due to rain the previous day. At various points on the ascent I found it convenient to haul myself up by the wire of the fence, to avoid slipping on the steep, wet grass. By the time I reached the top I was soaked even above my knees and was cursing not having brought my gaiters with me from Belgium. The final approach to the summit crosses the type of terrain that gives these hills a bad reputation - strength sapping, boggy, pathless heather! 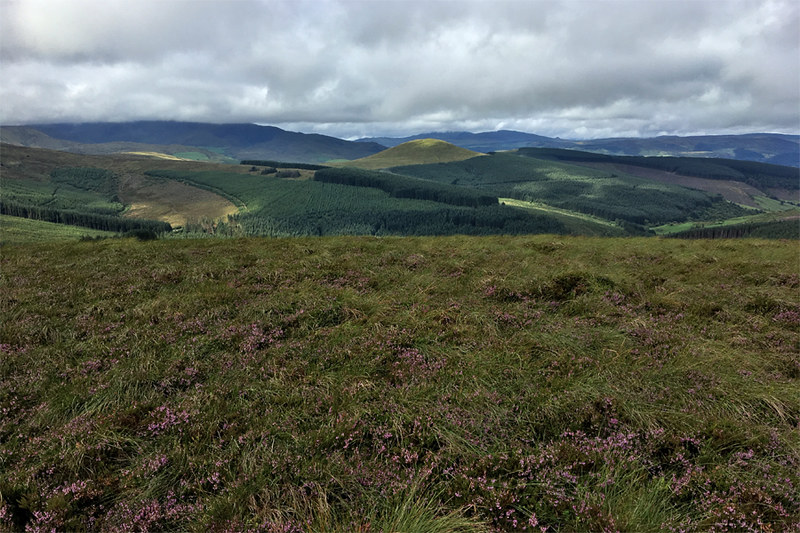 Arans in cloud to the west

Fortunately the next section of the walk south towards the trig point at Foel y Geifr was pleasant going. To the west the tops of the Arans were blanketed in dense cloud although the views east of the Hirnant valley and road were impressive. However, the descent east towards the road was positively grim. By now my right foot was soaked from water ingress into my boot. I was also increasingly apprehensive about the possibility of crossing paths with a tick in the deep undergrowth. On reaching the road I sat down, wrung out my wool socks, checked for ticks and dried off a little before setting off with some relief up the land rover track that I would follow for more or less the rest of the walk. 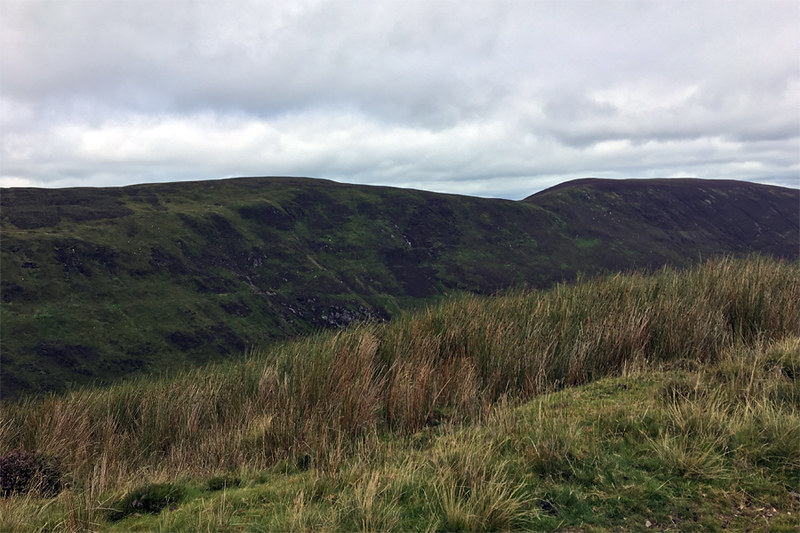 I’m not normally a fan of the scarred landscapes of commercial forestry but the track was a god send after the heather bashing on the west side of the pass. It led me speedily to the top of Pen y Boncyn Trefeilw. The top is unremarkable and hardly merits the title mountain. However, the feeling of remoteness up here was palpable, despite all the vestiges of the forestry operation. 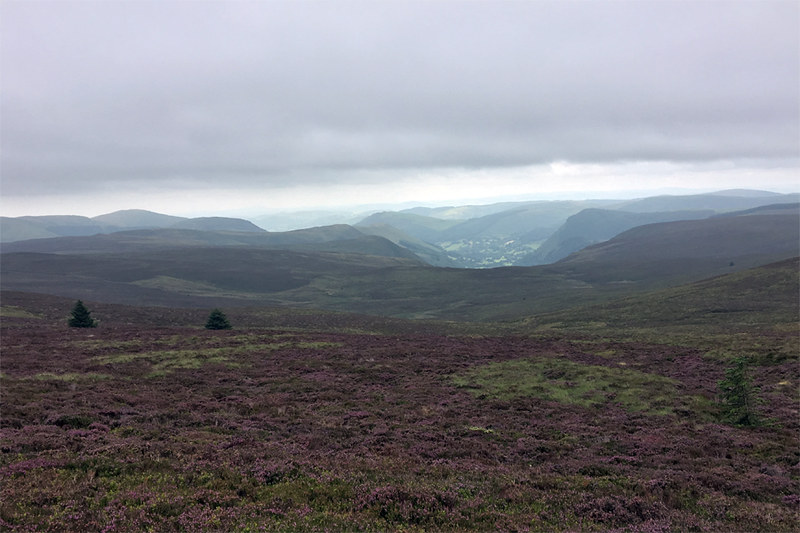 During my preparation for this walk the night before I had learned that the next and final Hewitt of the day would be Foel Cedig (667m). On older OS maps, Cyrniau Nod (666m) is still shown as the higher top. For me this reclassification of the two hills was a great relief because Cyrniau Nod is quite a bit further away from the forestry track. Foel Cedig is much more easily accessed. En route to its summit I decided not to bother taking in the Nuttalls of Stac Rhos or Cefn Gwyntog because the going across such pathless, heathery terrain was just too grim. Maybe I’ll return one day in winter to tick of these last Nuttalls when the ground is nicely frozen.

I descended to the car through the forest with a spring in my step. While the rough terrain deters many from these hills, for me that is part of their attraction. I met not a single soul on the hill all day. As with all my walks in this part of the world the feeling of solitude was sensational. You’d never think that these summits technically fall within the boundaries of Snowdonia national park. They certainly must be the quietest corner of the park. 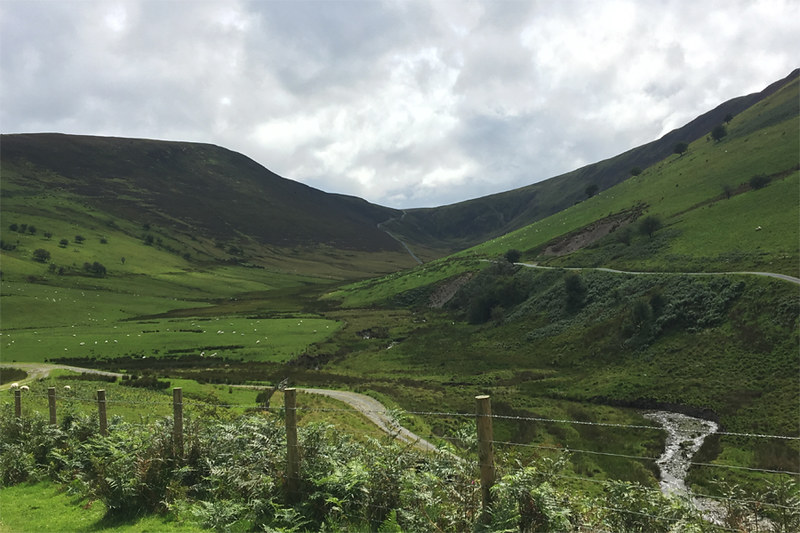 Arriving back at the car I dried my feet in the sunshine before driving northwards towards Bala following a convoy of vintage Triumph sports cars with their hoods down in the sunshine. From Bala it was an easy drive back towards Kidderminster via Llangollen and Shrewsbury. Home in time for beer and dinner with my parents.

After months of lockdown I was beginning to wonder if I’d get any time at all on a hill this year. 2020 will probably be my first year since 2012 without donning my crampons or wielding my ice axe and it's a shame not to be able to visit the Alps for the fifth year in a row. Nevertheless, my two days in Wales last week were really enjoyable. If nothing else they confirmed that the running and exercise I have been doing is sufficient to maintain my hill fitness.

Looking over my Hewitt map of Wales I now realise I’ve been up 83 of them since 2013. Still a fair way to go but I’m getting there faster than I expected, particularly now being based in Belgium. Hopefully over the next few years or so I’ll be able to tick off the remaining Welsh Hewitts on trips to visit my parents in the Midlands. I suspect that the munros will take a back seat for the time being, perhaps becoming a project for retirement!
Click to mark this as a great report. Register or Login free to be able to rate and comment on reports (as well as access 1:25000 mapping).


Berwyns turn blue and a womb with a view!

Around the Foret de Soignes