Pikethaw Hill and Wisp Hill from the west

The main big route for most folk when doing these hills is to include Ellson Fell to the east of the Ewes Valley. But this is a long, tough day's walking, so I chose to omit Ellson Fell for my own walk. Most routes start to the east of these hills, and a circuit means a walk dodging traffic on the A7. So I decided to do a circuit from the west, and was looking for a suitable low level route from start to finish, with the high level route simply along the hills. I chose to get to Pikethaw Hill first and return over Wisp Hill and Comb Hill. I'd no idea if the terrain below these hills was easily walkable along the valley of the Wrangway Burn, and new forestry on Merrypath Rig looked like it might cause problems along that way.

I checked satellite imagery to find any possible paths or tracks, and although these images aren't new, I found a good looking quad track through the forest on Merrypath Rig. So problems solved, out along Merrypath to Ewes Doors and back along the hills.

There's room for two cars to park at the start of the track to the ruins at Wisp. It's then alongside the new forestry along an old atv track. Easy enough to start, there was even a couple of waymarkers near the start of this forest section. The second marker post pointed away from my planned route, and as I'd no idea where it might lead, I stuck to my planned route through the forest, heading uphill away from the waymarkers going deep into the forest. The first half of this section takes you to the earthworks marked on the map, which is easily walked, having to push through the branches of sitka spruce at a couple of places, very jaggy.

As time goes by I would expect this to become much more overgrown and maybe impassable, but for now it's okay. An easy alternative would be to just follow the east side of the Wrangway Burn, outside of the forestry, it's good grassy grazed terrain, making for good walking conditions. From the earthwork, a huge gap in the trees leads down to the Wrangway Burn and the pass at Ewes Doors. Easy to start with One of the narrow bits Nice and wide now, with a good view of Pikethaw Hill

From here a right turn leads steeply to the top of Pikethaw Hill. 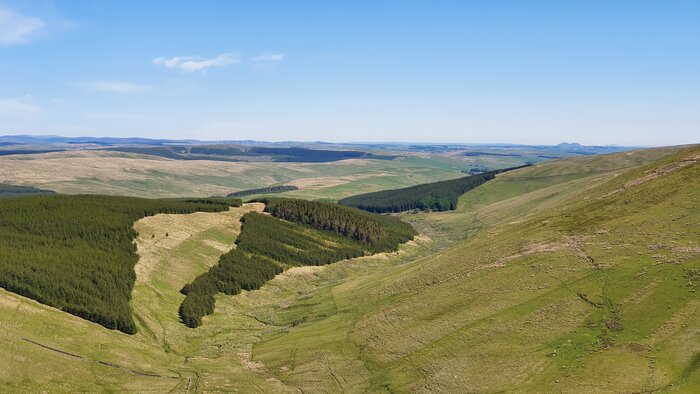 View back down to the forest on Merrypath Rig View toward the Moffat Hills

To continue the route, head back down to Ewes Doors, then straight up Ewenshope Fell on the way to Wisp Hill, the highest point of the walk. 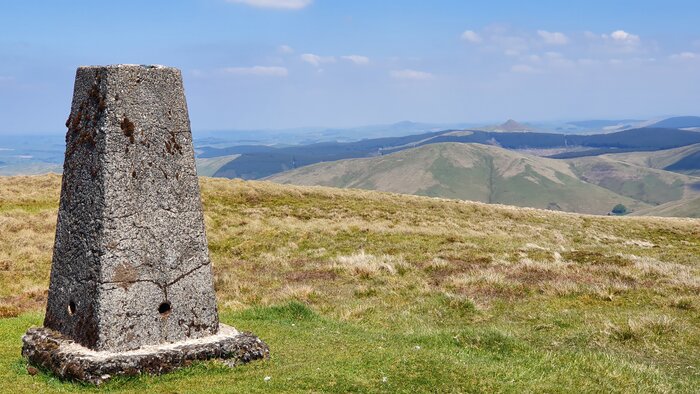 Since Ewes Doors, the walk has been following a fence line on the hills. Good for navigation in poor weather. From Wisp Hill it's a case of then following the fence all the way to the next top of Comb Hill with it's huge mast. From Comb Hill, a nice grassy track leads you back downhill to your starting point. 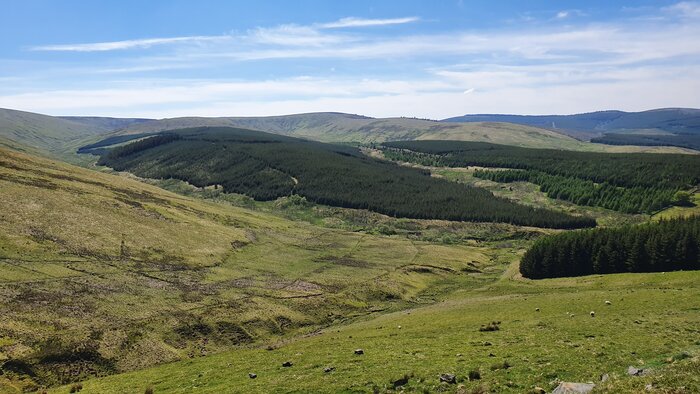 On the route back down looking to Merrypath Rig and it's forest. You can see the narrow path, taken on the outward route, heading up through the trees Track from Comb Hill heading back to the start

So if you don't want too big a day in these hills, and A7 traffic dodging isn't for you, then try following my route...if you're lucky with the weather as I was, then it's a fantastic walk in the area.

Kirkhouse to Peat Hill and Deuchar Law, return by SUW

Another glorious day, perfect for a Glen Afton circuit

A Borders trio from Fruid