In my slow progression through the Munros, I'd completed the western half of the Ben Lawers group back in 1992. It was now time to complete the group. Back then An Stuc was still a top, so the expectation was to finish the other two at a suitable time. The addition of An Stuc to the list added an extra degree of complexity to the task.
It was also clear that there was a lack of access from the A827 and the other Munroists had said that the welcome for walkers at Lawers village wasn't great, so the day before I made a recce and found a layby opposite Craggantoul (NN656381). The old Munro guide I use (Butterworth 1988: The High Mountains of Britain) suggested only 1 parking slot. There are now a good 5 and it was empty.
From there it was a short westward walk to an access track towards Ben Lawers that zigzagged to a service road under the Ben, past Meall Odhar and on to the small Dam above Machuim. It's a long 2 hour slog thus far but it shortens the return off Ben Lawers in compensation. 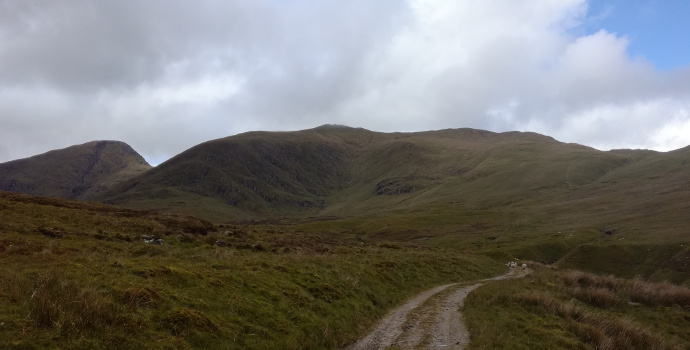 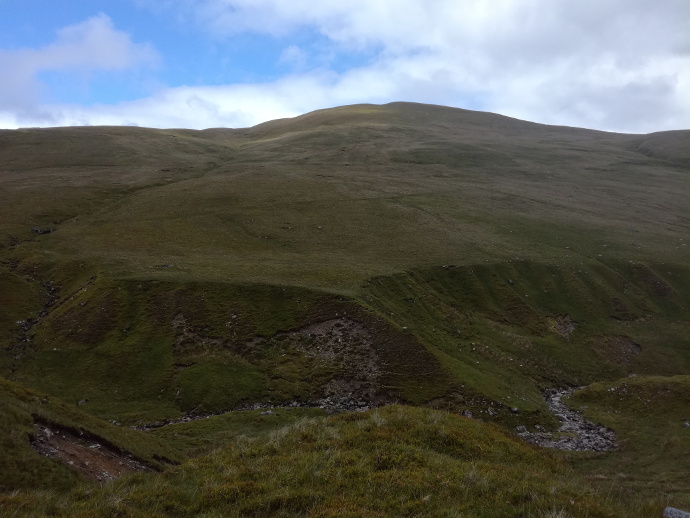 Meall Greigh from just below the Dam

After the dam there was the feintest of tracks up to the bealach at Larig Innein where recent fencing has been added to the gulley. Keeping to the east of the fencing and progressively working away from it I gained the track between the two Munros. Then it was a steady pull to the summit of Meall Greigh. 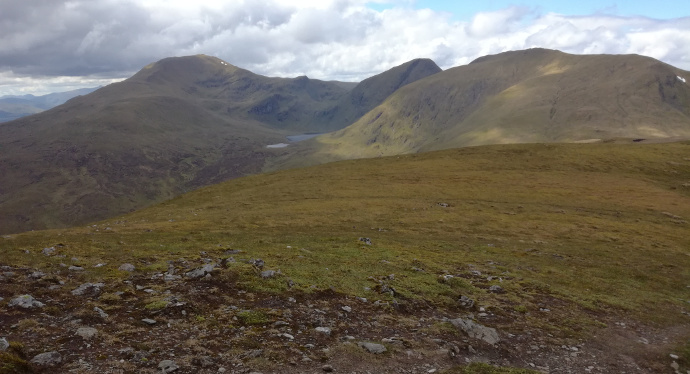 The route ahead: Meall Garbh to Ben Lawers (r-l)

Retracing my steps back to the bealach, there was a steady progression to Meall Garbh. At this stage the clouds came in and visibility dropped markedly, but the way was obvious even if the several highpoints were less so.
With clearing weather the next obstacle came into view. From Meall Garbh, An Stuc looked formidable. Most photos tend to foreshorten the view and make it more impregnable. This one is the opposite of what I saw and felt. At the time it looked like a solid wall. 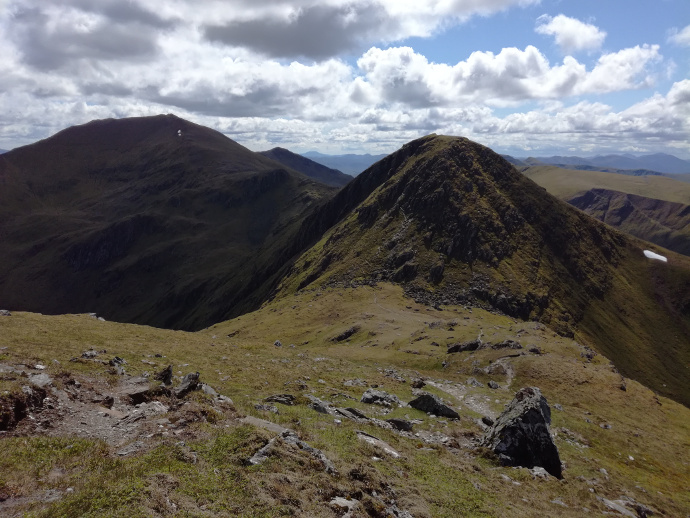 An Stuc face on

I'd managed Stuc a'Chroin a couple of days earlier so with that in mind I followed the path to the base and worked my way upward. My favoured guide (mentioned earlier) gave the reverse route and spoke of treacherous, steep wet grass at the summit. Quite likely, but there was a steady progression to the right as I worked my way up the scramble and I emerged to the top right on the photo above. While I would assess it as harder than Stuc a'Chroin, it wasn't a monster but relieved nonetheless that I had made it.

I had hoped to exit to Lochan nan Cat and contour Ben Lawers as I had already 'bagged' it, but there didn't seem to be a comfortable exit. I therefore chose to head up to the Ben and exit from there. It was a lot of extra ascent and my knees aren't as good as they were. The ascent is manageable but going down... I made a quick visit to Creag a Fhithich for a bonus top before the haul up Ben Lawers where I was at least able to view my tour.

Looking back: An Stuc and Meall Garbh Opting for the east ridge off the Ben and gradually working south and then west down Coire Cireineach I came out slightly to the west of the 'service road' I had come up. It was grass virtually all the way down to that point which from my knees point of view was perfect (least impact). Thence it was a knee crunch down the road to my parked car.

While many seem to do the whole 7 Munros on the ridge in one go, that is and probably always was beyond me, so the problem for some will be where to split it. This route makes a good case for doing the Meall Greigh to Ben Lawers as a foursome and Beinn Ghlas to Meall a'Choire Leith to complete the rest. I would certainly recommend An Stuc in this direction as finding a nice way off eastwards might trouble some.
It's still 14 miles and probable 2 or 3 more than I would like, but certainly an option. The main downside is a lot of unmade road. Even then the view down Loch Tay takes your mind off of it.
Click to mark this as a great report. Register or Login free to be able to rate and comment on reports (as well as access 1:25000 mapping).