Following my Ring of Steall a few weeks back, I was looking forward to the western 2 Mamores Munros. Stob Ban looks such and impressive mountain from RoS.

The weather hadn't been great for a few days and l had skipped the hills for some touring around in the car, visiting some places on the west coast that l had never been. Now it was such a nice day!

I had a great sleep in the Glen Nevis hostel and made the short journey up the road to the lower falls car park. There was almost nobody around and I had the car park to myself.

Having got my walking gear on and bag firmly on my shoulders, I started off, following the WalkHighlands recommended route. The first part of the walk was the same as my exit from the Ring of Steall. 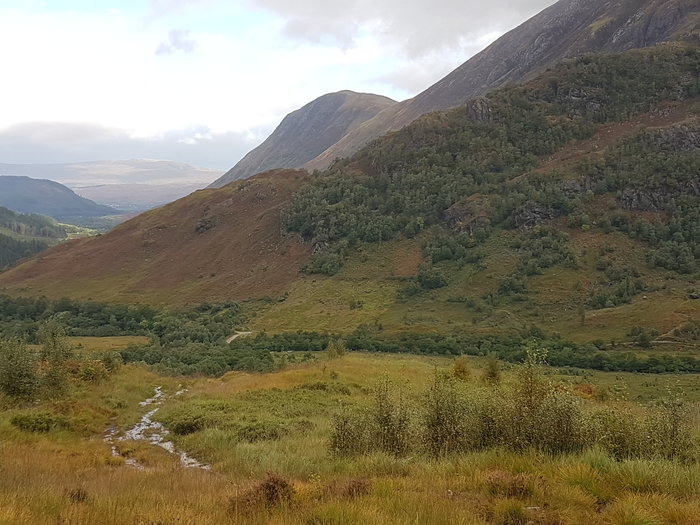 As the path forked, one toward the Sgurr a'Mhaim knee-breaker and the other up the Corie a'Mhusgain, it was a very nice gradient and clear path all the way into the corie. 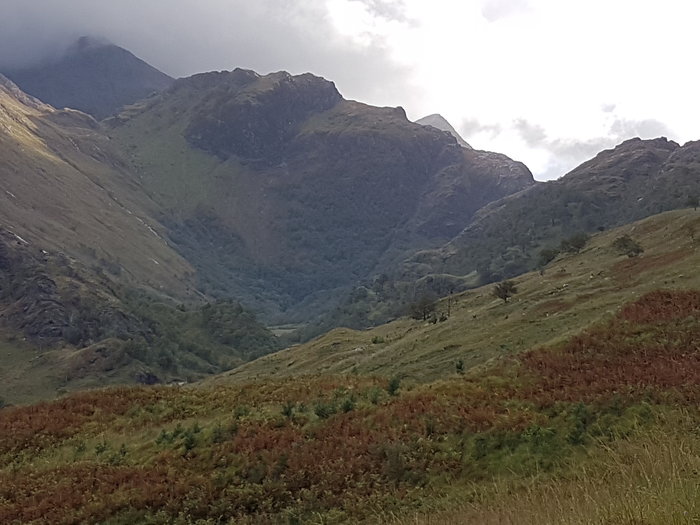 Binnein Beag Peaking over the top

The views around to the other hills were not exactly clear yet and the Ben, of course, was covered in clag. However, it looked like it was likely to burn off. Before too long, it did! I had only started the ascent but now I could start to see Munro tops. 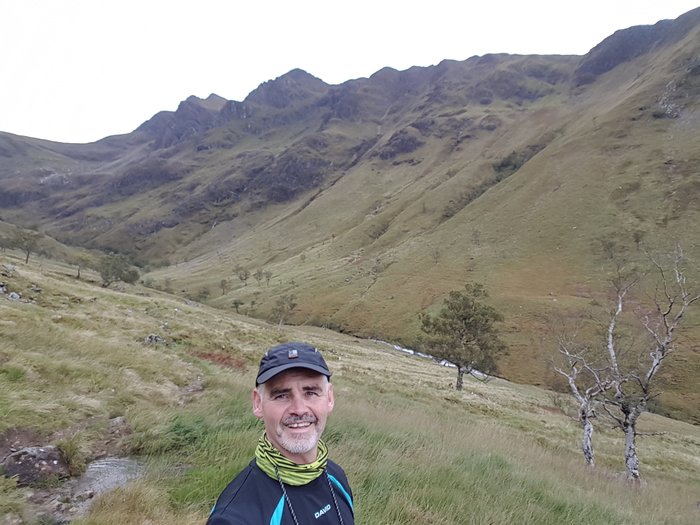 First sight of the peak

The walking was fairly easy still but I could see that there would be the rise before the bealach was reached. I came across one point in the route I was not expecting and wondering still if I took a wrong turn some where. I followed the path over several burns and a couple of minor gorges but then in one of these I hit a straight slab that was about 8 feet high. I couldn't see an obvious way around it without taking a bit of a detour. Getting up the wall was not so difficult but I am not the shortest person in the world and I struggled to reach the hand and knee holds to pull myself up. I just thought of those who may be shorter or maybe not having physical power to pull their own body weight and thought there must be an easier path but still I just couldn't see it.

Anyhow, as I proceeded toward the climb, the views just got better and better. The natural beauty of the area I quite often miss while trudging toward my target but today my senses were on full power and I was loving it 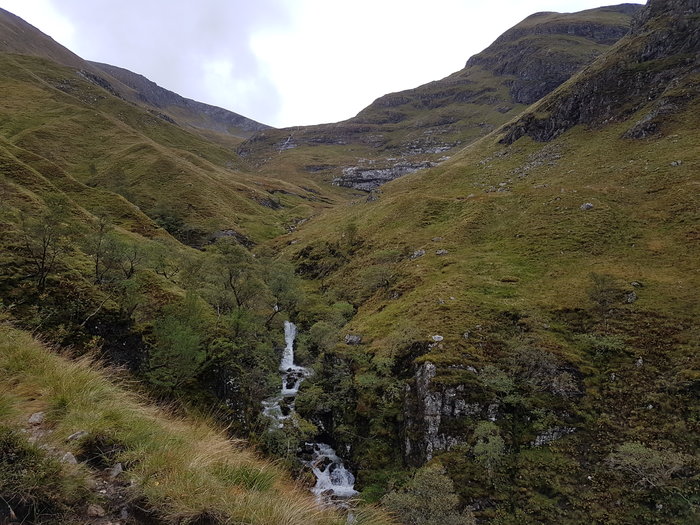 Waterfall running into the glen 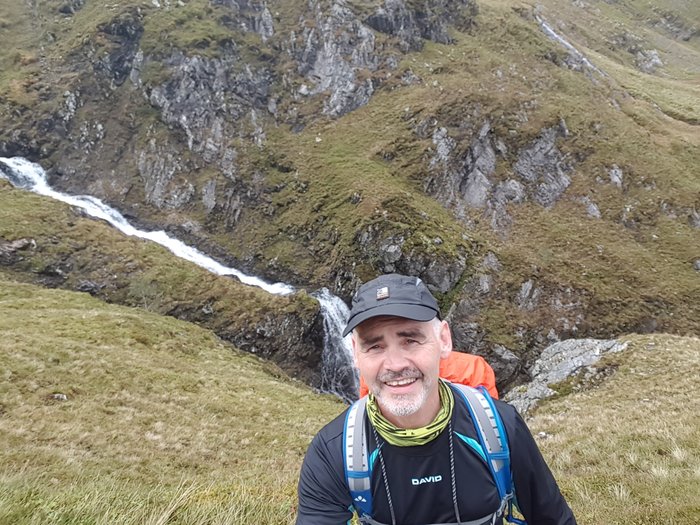 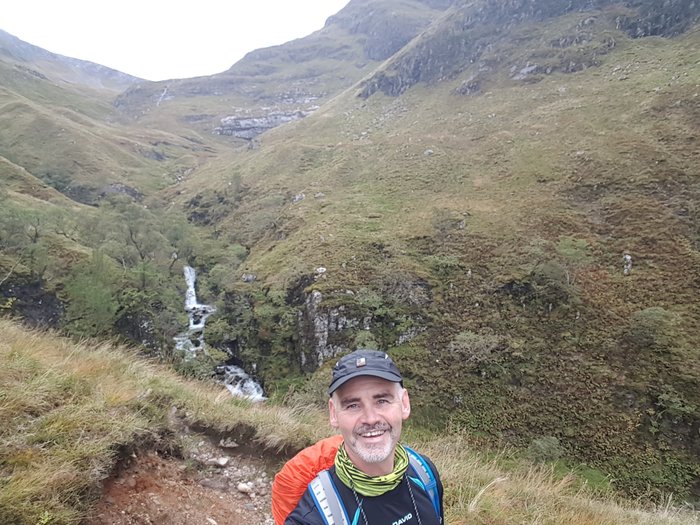 Ridge line heading to the bealach

Just a few hundred meters more and the fantastic summit of Stob Ban revealed itself from the most amazing angle. I was feeling just great 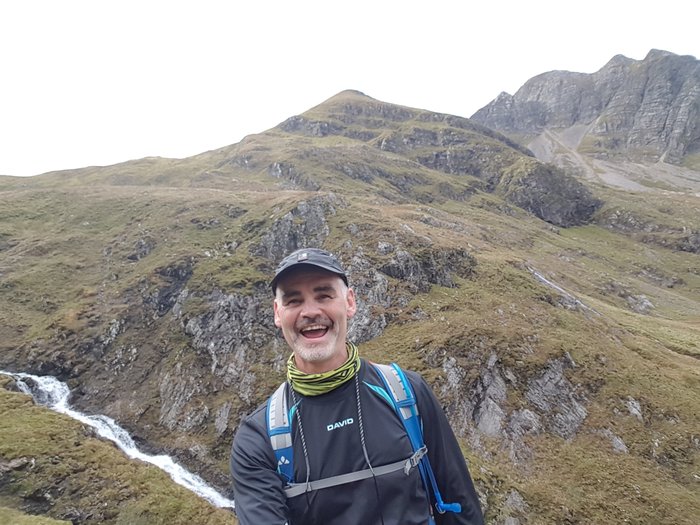 After noticing the walk in front of me, I also noticed that behind me, Sgurr a'Mhaim was now showing itself too. Views in most directions After taking in these great views for a while, I decided to put the head down and get up to the bealach. Again, the walking was not difficult despite the increase in gradient and soon I popped out at the bealach below Stob Ban.

From here I had time to look across to Glen Coe summits and Ballachulish. But the Mamores were looking fantastic. 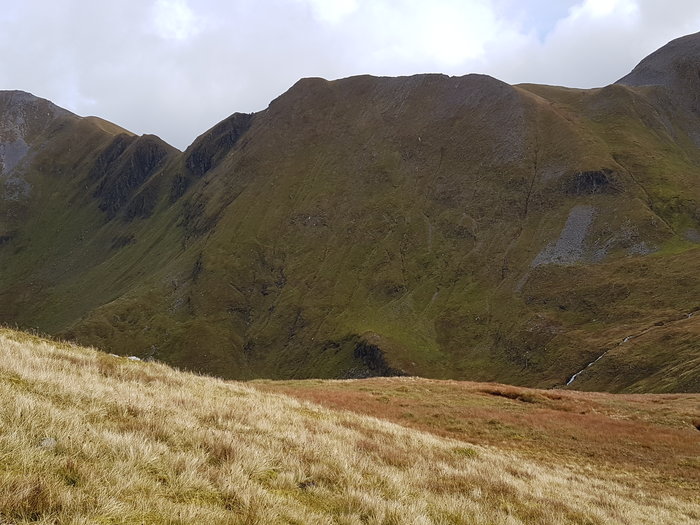 Just before the summit of Stob Ban, I took this one of the Mamores and tried to label it for my own interest but I don't have the experience to know if they are absolutely correct but pretty close I guess. 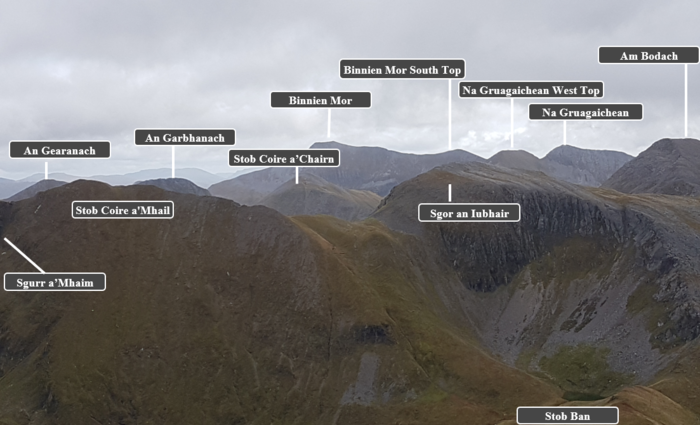 Ring of Steall and Mamores

Then for one last push. It was a little more rocky than I was expecting but a little shorter than I feared. Before long reach the summit and the views were breath-taking. Stob Ban Summit Cairn and some Mamores in background

Another of the summit, this time with Sgurr a'Mhaim. Unfortunately, the Ben was still in the clouds. 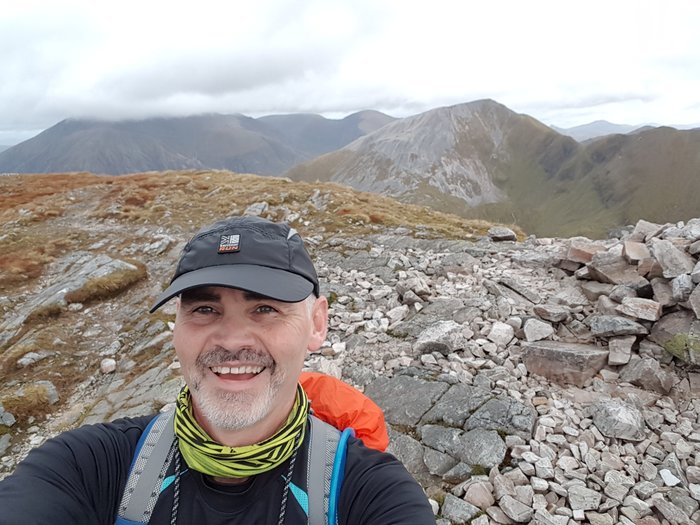 I was so delighted with the walk so far and could see the route to the next top and further to the next Munro and it looked pretty straight forward. First there was the descent down the scree but then it was fairly flat around the rim of the corrie before the rather rocky top in the middle of the plateau. Once around that, the going was a gradual incline toward the second Munro of Mullach nan Coirean. This was a leisurely stroll and I was enjoying the open space and easy navigation

In the distance I could see the first fellow walker of the day, leaving the summit of Mullach nan Coirean and heading my way. 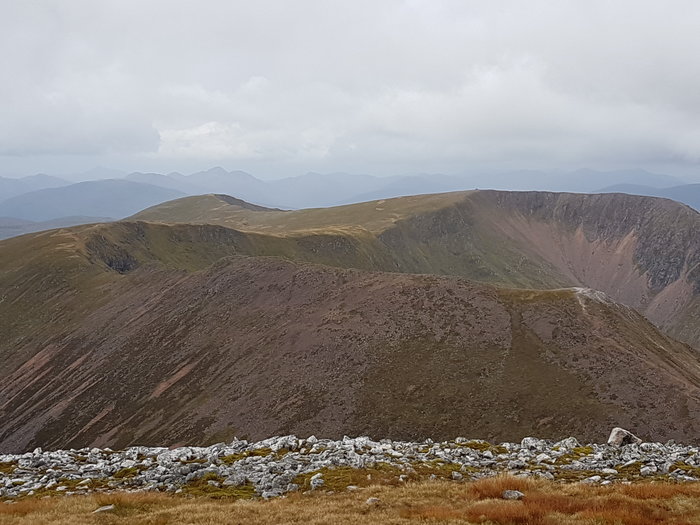 The route to the second Munro

When we met, we exchanged the usual pleasantries and how our days were so far. It turns out that he had done this route more than once and knew quite well. I asked him if the route off the summit was easy and he confirmed that it was just to follow the ridge line and then it was fairly straight forward. He told me that his wife was at the car park in a camper van and if I see her, tell her he won't be long. I said I would and headed on toward the next target.
The path continued to be easy and there was no final scramble or massive boulder field in this one. 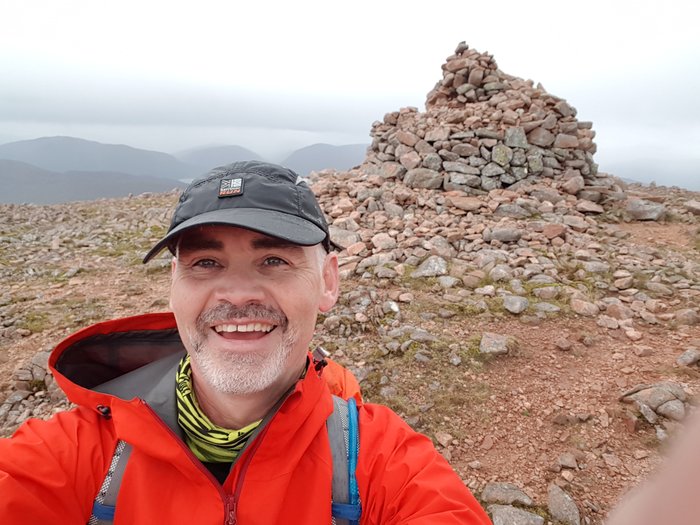 Now, from the picture of Mullach from Stob Ban, above, you can actually see the huge cairn and the ridge line sweeping around the corrie and clearly what the gentleman told me to do. It is clearly marked on the WalkHighlands route (in my day pack), it is quite obvious on my OS Map (in my day pack) and probably easy to follow from my Garmin (in my day pack). But oh no! Not me ! I just follow my nose down what looked like a clear shoulder coming off the summit and heading pretty much north toward the car park. What could go wrong?

From here on, there are no more pictures and focus turned to the route. Luckily visibility was great and I could see where I was going and clearly this should led in the general correct direction, so not finding the path instantly when leaving the summit shouldn't be an issue.

Usually when this happens the paths is 50m to the left or 50m to the right. I kept heading straight down the shoulder but after I got to Glas Chreag, about 1km, I started to think I should have come across the path by now.

I was still descending and still heading off the shoulder but instead of NNE, I was heading NNW off the wrong ridge/shoulder. 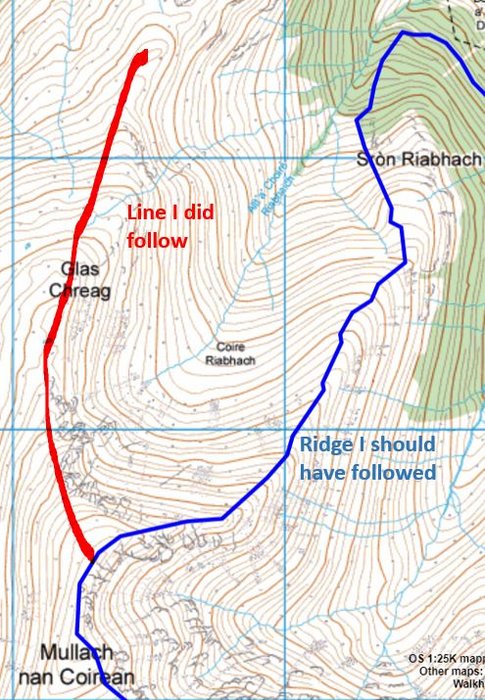 I decided at this point I was on the wrong route but it seemed that continuing would be just as easy. So I continued about another 1,5km to Sgorr Chalum before I decided that I should probably navigate properly instead of trusting my nose

I looked around and then to my surprise, there was a path down the hill to my left with some people walking on it. That will do, I'll take that. It was still about 1km away but a path would certainly be easier than this terrain I had been on. The descent was a little steep and still some rought terrain to cross but i could make that

Hold on. There were lots of people walking on the path. What was this, people running in the opposite direction? It was the WHW or the A85.

This was going to take me off in the opposite direction from what I wanted, but after checking the map, it would probably be easier than heading directly toward my destination.

I started to head down. It was tough. Rough terrain and plenty obstacles. Burns, crags, deer fence, ferns up to my chest and woods so think I was need a machete. Eventually I hit the path. Pretty relieved at this point but now I still had a lot more kms to go than planned.

I have a lot of admiration for these guys, cross country running is not that easy and having to go off the path to avoid a lazy walker would be frustrating. So every 30m or so, I gave way and applauded the runners coming through.

To cut a long story only pretty long, I marched on the WHW and where it enters Glen Nevis, I took the track south east and back to the lower falls car park.

You can see from my walk stats and GPX that I ended up 22.7km instead of about 13km that WalkHighlands suggests.

Needless to say, the old guy had beat me back and there was no camper van at the car park.

A little frustrating at the end but after a few hours, I thought that I had probably just created a memory!


Stob Ban_2018_09_14.gpx Open full screen  NB: Walkhighlands is not responsible for the accuracy of gpx files in users posts
Click to mark this as a great report. Register or Login free to be able to rate and comment on reports (as well as access 1:25000 mapping).


My First Ever Wild Camp

I Got By With a Little Help From My Friends

To Bidean or Not To Bidean