My Bud and me had not been out since last year except for a wee hike and overnight camp on Bennachie in January this year which turned out to be rather different than what we expected and turned out to be a bit mad. We decided to do Mount Keen from Glen Tanar as we had done it from Glen Esk previously. We got to the car park and got our gear on then headed off. The walking is easy and we stopped at the half way bothy had food and hot drinks and decided that we would sleep here instead of pitching the tent further along the track. We packed up our gear and headed off again and dumped our rucksacks in the trees off the track and out of view. After crossing the bridge near the Shiel of Glentanar we started the main ascent 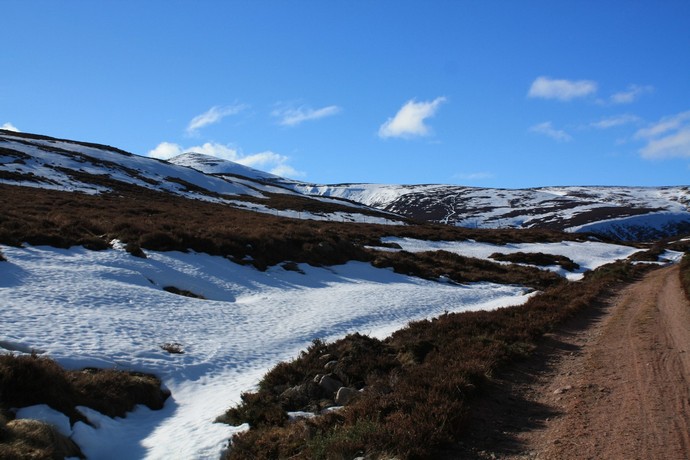 , after a while we stopped and put our crampons on as there was a good covering of snow. The ascent is pretty straight forward and not that steep. We were lucky as the sky was clear form low clouds and we got good views of the surrounding area and of Carn cac Beag (Lochnagar) with cloud cover on its top. We reached the summit , took some more photos had food and hot drinks then started on the hike back to the car . We stopped at the half way bothy had hot drinks and some food sorted our rucksacks out and head back to the car in the dark using our head lights. Fantastic day of hiking.


Aviemore to Linn of Dee via Cairngorm and Ben Macdui

Location: Aberdeen
Interests: Scottish mountians/outdoors, Photography, Healthy eating and computers.
Activity: Munro compleatist
Pub: Juice/coffee on a summit
Mountain: Buachille Etive Mor.
Place: The Wilderness.
Gear: My Gear & Camera kit
Ideal day out: My ideal walk would be a ramble, and straight forward part ascent then a scary scramble(yet to do) and a narrow ridge walk(yet to do) BUT then theres my Daughter who comes along at times and has done a few Munros which makes the day special even tho its straight forward ascents/desents(shes still young).
Ambition: Munros & Killimanjaro