It was an 0630 start from the car park at Succoth on this cold and drizzly 1st of May as i began my walk which was to begin with a hike up The Cobbler and then to take in Beinn Ìme and Beinn Narnain.

After making my way through the woods and being passed by several fell runners I got my first sight of The Cobbler with its low cloud and dusting of snow. I couldn’t wait to get up there! 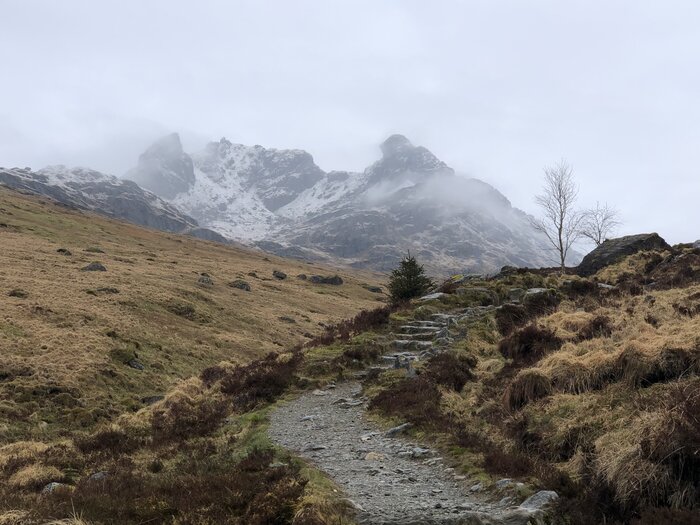 The Cobbler, always a great sight.

Visibility was changing all the time but it was a relief to get to the summit, not much of a view but good to see plenty of people out and about. The Cobbler summit, plenty of people out and about.

After a quick drink and a walk up to the north summit (no view from there either) I made my way down to begin the climb up Beinn Ìme. As the morning wore on there were a lot more people around, walkers and runners. The light snow had stopped, the cloud began to clear and there was very little wind so the weather started to show some promise. I enjoyed the climb up Beinn Ìme, an easy path to follow up to the highest point of the Arrochar Alps. It was a shame there wasn’t much in the way of views on the summit though as the clouds once again started closing in. Time for a rest and a bite to eat! 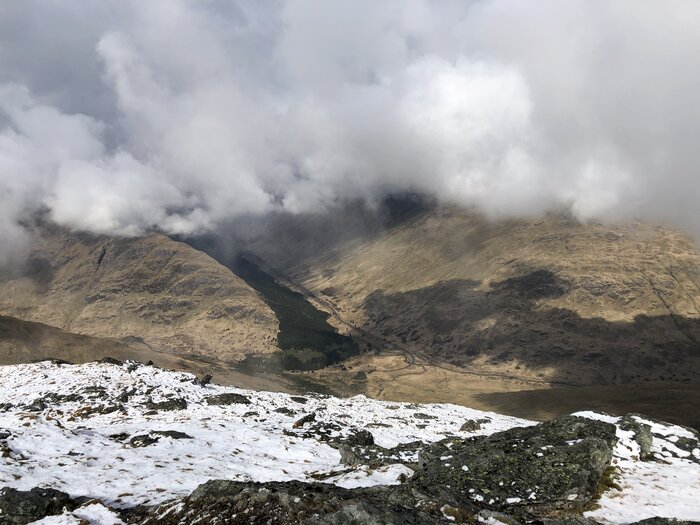 A view at last, albeit a brief one.

So after spending a bit of time up Beinn Ìme it was time to get going once again and head for the final target, Beinn Narnain. On this day of very changeable weather it was no surprise when it started to hail. We had everything else this morning so why not? The climb up Beinn Narnain.

It was a steeper climb up this hill than the previous one but upon reaching the summit I was at last rewarded with some decent views! View of The Cobbler, the snow already gone! I spent about a half hour resting on Beinn Narnain before beginning what was a steep descent back to the car park. I got some nice views of Ben Lomond and the loch as I headed back down, but then the rain started as I got to the last 200m, so I was glad to get back to the car. Overall it was a great day out despite the unpredictable conditions but then that’s what makes it all the more interesting! It’s a walk i will definitely be revisiting