A Windy Day On The Moffat Hills

With the weather looking good for the whole week there was going to be a lot of hillwalking getting done, and on Monday morning it started with a trip to Glencoe and a walk up Bidean nam Bian and Stob Coire Sgreamhach, with a couple of tops added.

It’s always good to get to Glencoe early, we all know what parking is like later on so I arrived at the car park at the Three Sisters at 6am and set off following the WH route up Coire nan Lochan. It was cloudy down low but with fleeting glimpses of blue sky I knew there was a excellent chance of an inversion. 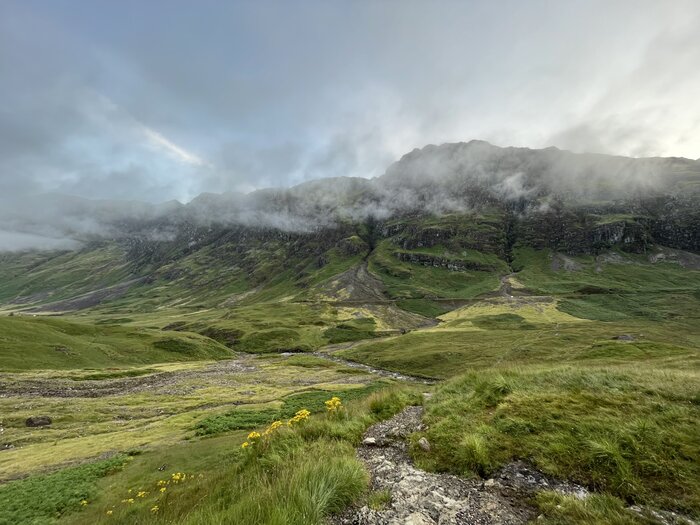 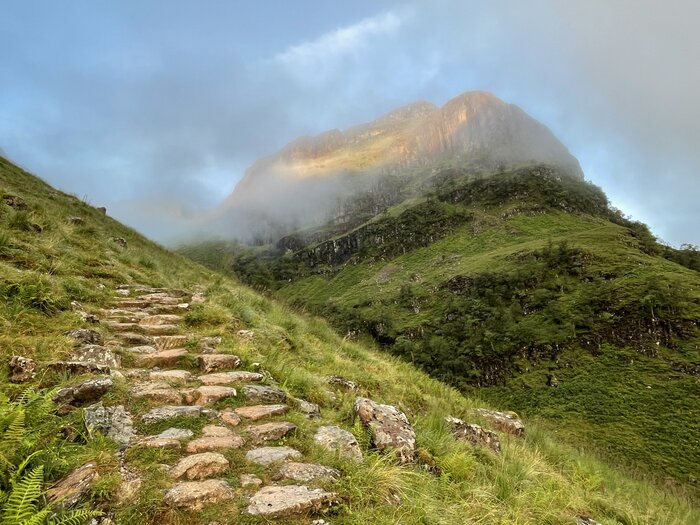 There’s a good path up between Geàrr Aonach and Aonach Dubh, just a couple of slippery rocks to negotiate near the waterfall and as expected it wasn’t long before I was above the cloud level and the sun was shining bright. 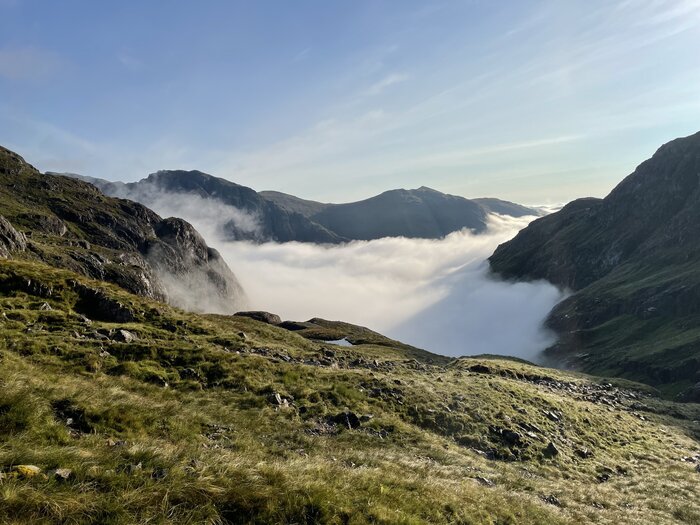 Getting above the clouds.

There is flatter area at the top of the Coire nan Lochan which was very boggy. The path is a bit erratic but I found myself gazing up at the impressive sight of Stob Coire nan Lochan and it’s rocky ascent, and as I made my way to the beginning of the climb the cloud inversion was stunning. I could see several hills popping their summits above the clouds, including a dramatic view of the Aonach Eagach ridge. 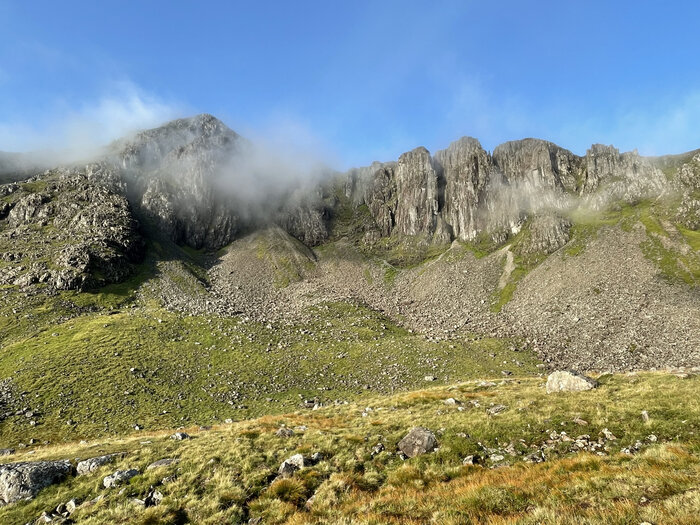 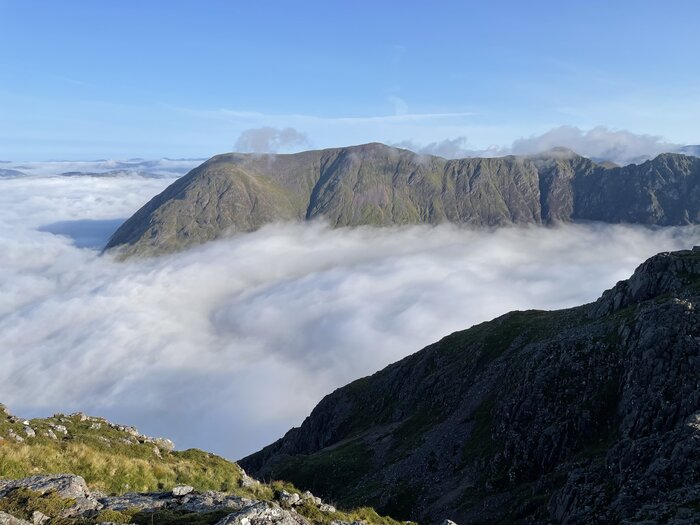 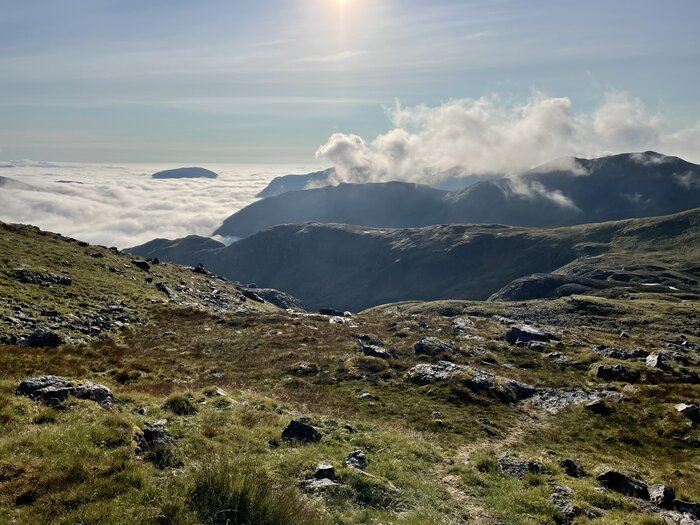 Looking to the east.

It’s a rocky scramble up to the summit, just don’t stray too far to the left as you ascend. I was getting good views of Bidean nam Bian and also Stob Coire nam Beith, another Munro Top which I was planning on visiting. 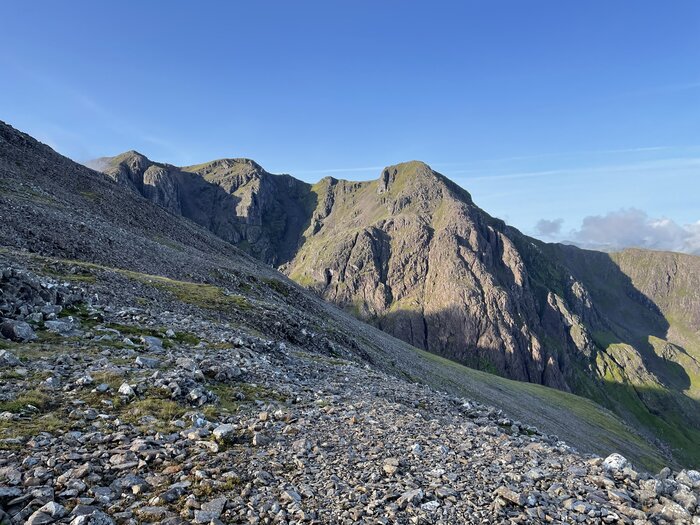 Stob Coire nam Beith and the sharp point of Bidean nam Bian coming into view on the left.

I eventually reached the summit of Stob Coire nan Lochan and the views were changeable to say the least. You couldn’t see Stob Coire Sgreamhach at all, and even Bidean was appearing and disappearing.to the east and southeast you couldn’t see any of the Glencoe mountains at all. Views changing all the time. 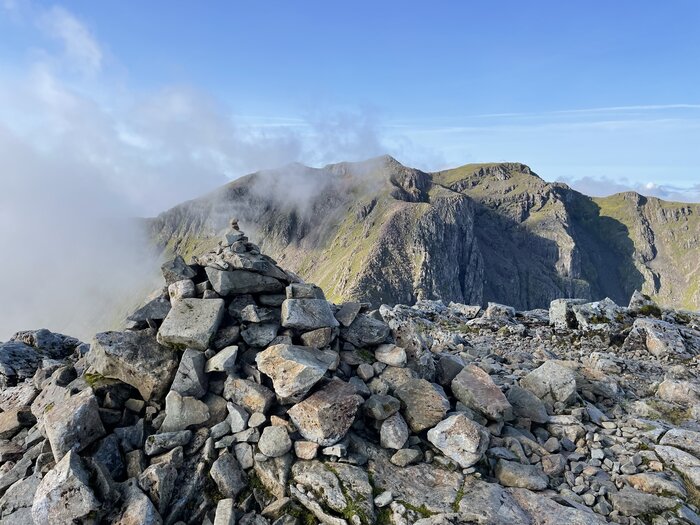 Heading straight down to the bealach to begin the climb up Bidean nam Bian I finally got my first view of Stob Coire Sgreamhach, although it wasn’t visible for more than a few minutes. 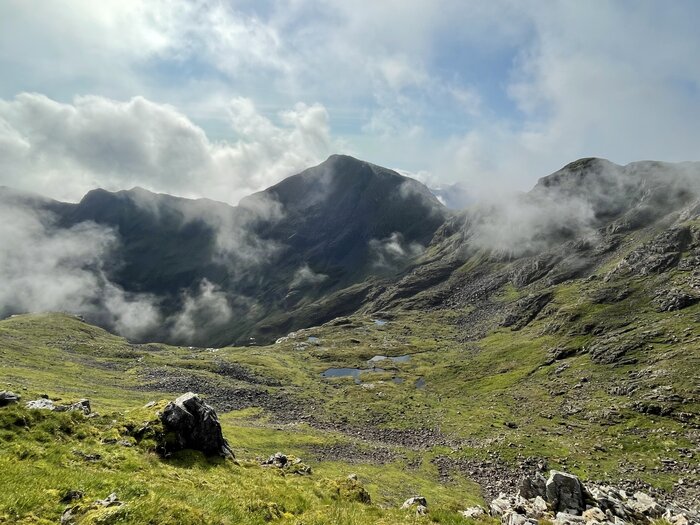 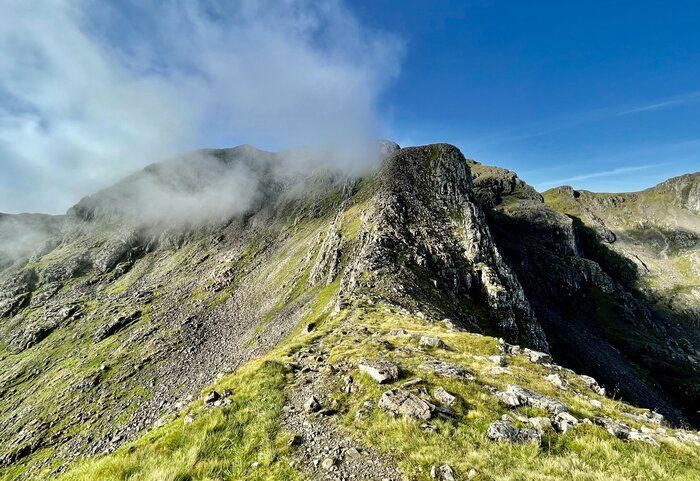 Heading up to Bidean nam Bian.

The climb up Bidean nam Bian is steep with one or two bits of scrambling but pretty straightforward in the main. I met the first climber of the day since I started the route, he was going the opposite way round. He must have been a very early start! (Or maybe I’m just slow)

Eventually I reached the second summit of the day, and more stunning views above the clouds. 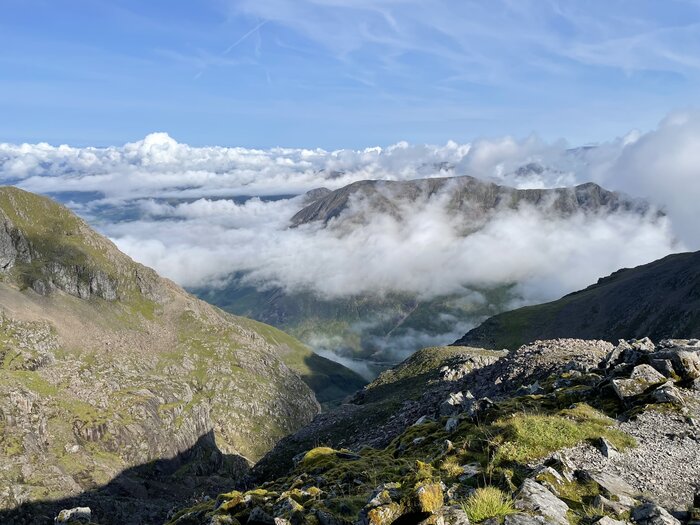 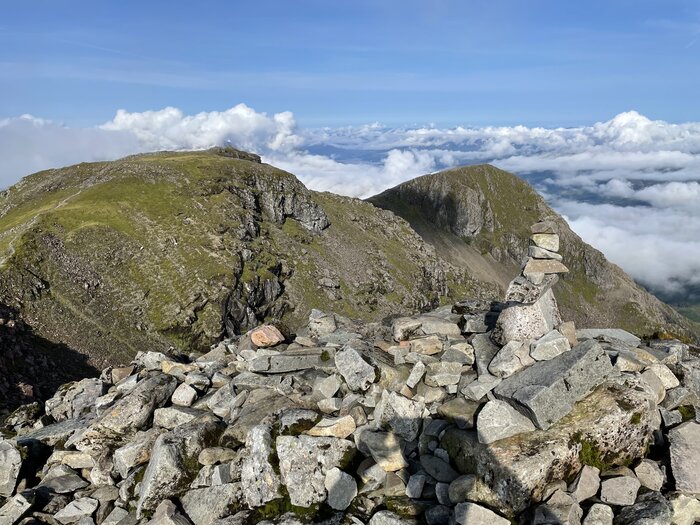 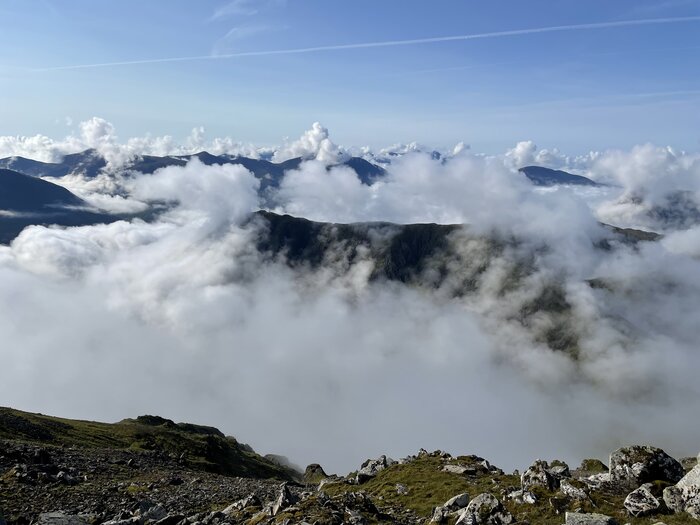 Going off the WH route I headed over to check out the summit of Stob Coire nam Beith. There is a good path across with a bit of scrambling just off the summit of Bidean nam Bian and the ridge does narrow a bit so care needed as always. It only took about 15-20 minutes to get over to summit number three so worth the wee detour in my opinion. 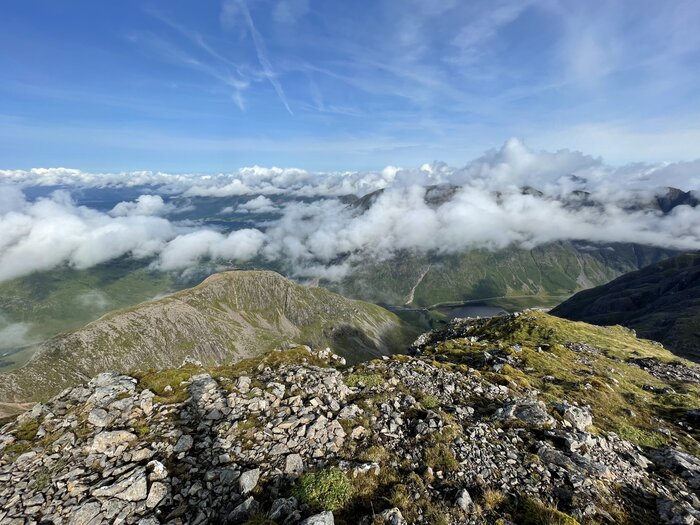 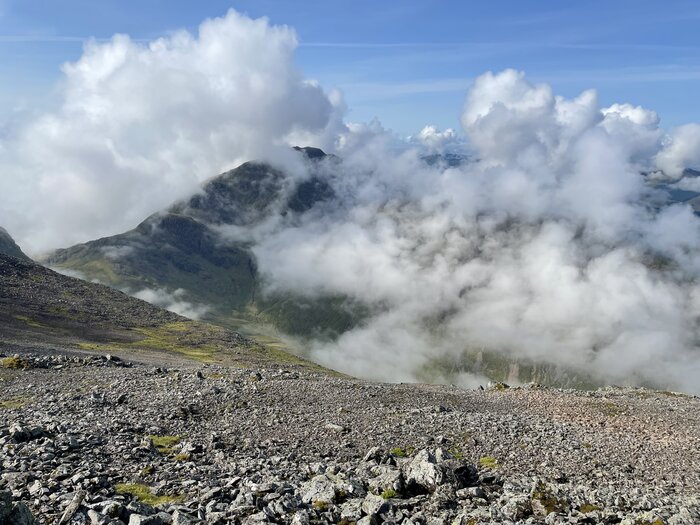 Retracing my steps back to Bidean nam Bian it was time to head to summit number four for the day, Stob Coire Sgreamhach. By this time the cloud had really closed in and there were limited views, the famed Lost Valley making fleeting appearances. Once again it’s a fairly straightforward route up to the summit, rocky once again but no drama. There were a few people on this Munro summit as I sat down for a bite to eat and waited for the views to open up, which sadly never happened. The path to Stob Coire Sgreamhach. 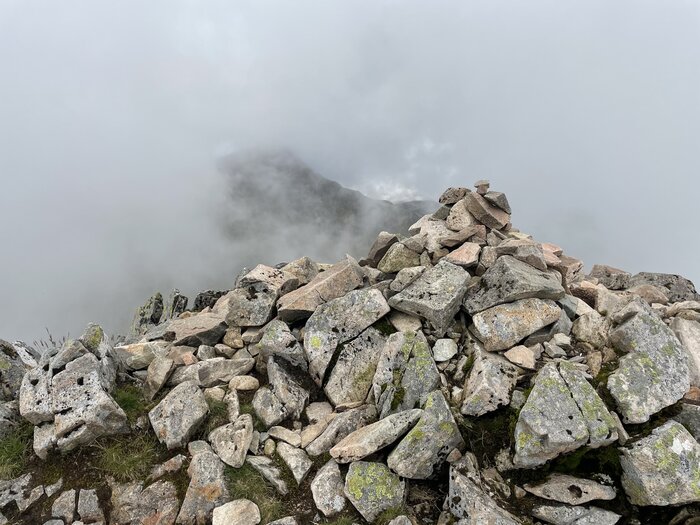 The descent path down to the Lost Valley is very steep initially on loose scree. I seen a few folk ahead of me slipping and sliding their way down but somehow I managed to stay on my feet. Once it levels out though there is a good path taking you down to the bottom of the valley and towards a small wooded area. 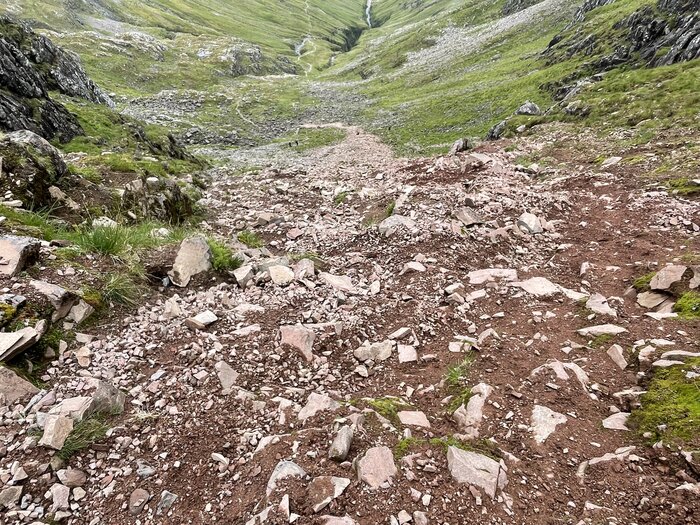 Steep descent down to the Lost Valley. 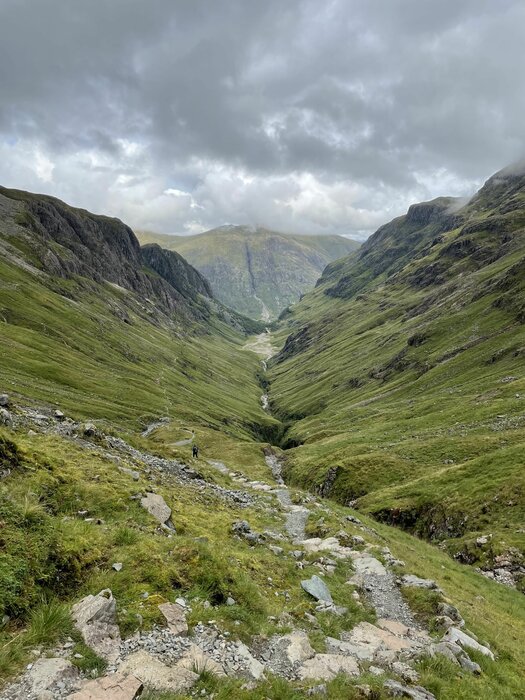 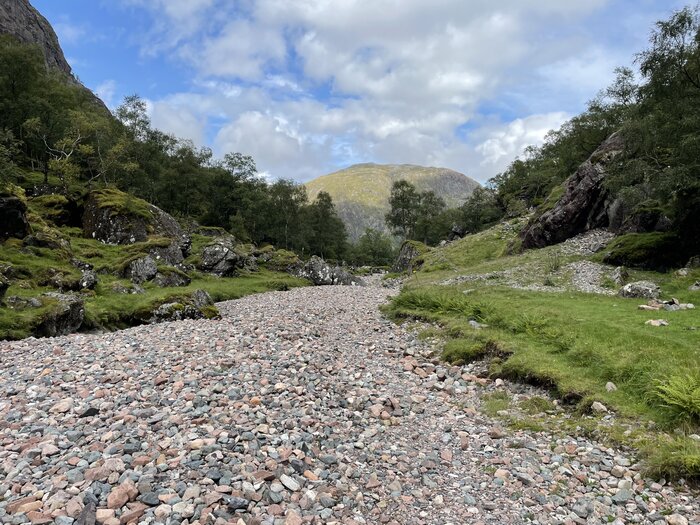 On the valley floor.

Of course by the time I got back to the car park the cloud had gone completely and the sun was shining and Glencoe was there in all its glory. Isn’t that always the way? Overall though it was a fantastic morning and a very enjoyable route. I’ll have to do it again sometime, hopefully when it’s cloud free