Creach Bheinn 150421.gpx Open full screen  NB: Walkhighlands is not responsible for the accuracy of gpx files in users posts

Given the quality of the the weather, high pressure planted firmly over the country like a giant invasive alien blob, it would have been hard to have a bad day in the hills. Regardless, Creach Bheinn inserted itself in my Corbett top 5 firmly on it's own merits.

I had planned this before it was announced that the rules on crossing district boundaries would be relaxed the following day, even double checking that I was not accidentally leaving Argyll and Bute. Sgulaird had been my first thought, but then it seemed to make sense to continue last years theme of more obscure (and therefore quieter) Corbetts.

The coastline between Oban and Ballachulish is one of my favourite parts of the country. To me on a good day, it has just the right proportions of mountains, lochs and islands. The midge ratio can be a problem, but that wasn't an issue yet.

Arriving a Drumavuic at 6.30am I parked in the layby and began to ascent to hill track. Quickly gaining altitude I found myself turning around every 100 steps to admire the view behind me. The hills had a clear sharp look about them that you only get on a really clear day. I continued to the bealach, feeling that this was easier than leaving the track earlier as the WH route suggests (also I forgot!). Here there is large 'cairn', which must have been made using a JCB, on the opposite side there is a faint stalkers path that makes for easy access to the ridge. This was one of most enjoyable ridge walks I have traversed. The terrain was easy in the dry conditions (though it might be less fun after a few days rain) and I found my self zigzagging from one side to another, taking in the glorious views in both directions. 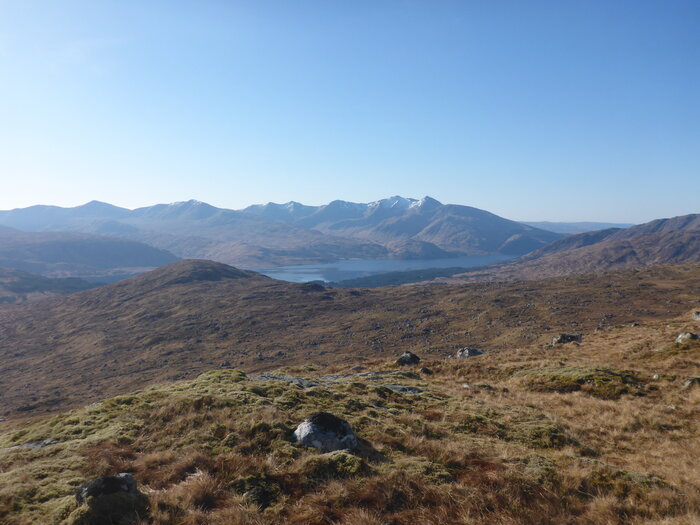 I can say with a fair degree of confidence, that I took more photos on the walk than any one I have been on before. Usually on return home my initial thought is 'oh I should have remembered to take more', not 'why is the memory card taking so long to download?'

While packing my rucksack the previous night, I had a brief internal dialogue over whether to pack my crampons and ice axe. Having been bitten once by their omission at this time of year in the Affric hills (had to miss out a snow covered peak), I erred on the side of caution and threw them in. Needless to say, this was as bad as snow got.... There was a steep drop then re-ascent before the final push to the summit. The views from the top were glorious in all directions, with Mull and the hills of Morvern clearly visible in one direction and Cruachan, Glencoe and the Ben in the others. I always enjoy seeing the 'hill' I cut my teeth on as a child, the Barr Mor on Lismore, from this elevation. I remember when I used to think it was high! For my money it still has some of the best views in the country metre for metre though.

One peak in the distance which stood out, I believe I identified as the conical An Stac of Lochailort. Funny how the hills that catch they eye aren't always the highest or most famous ones. I lingered at the top longer than normal, before making my way back down, again moving from one side to another to maximise the views. Once back on the landrover track the descent was quick and straightforward, I had thought about taking my bike with me when planning the trip, more for a rapid return from the bealach, but with hindsight it would have been no fun on the loose material.

There is a very real risk than when I think I am in the hills by myself that I will start to sing, badly! I suspect the runner that passed me on the way down was more than a little unnerved by my rendition of 'Satisfaction' I was belting out. At least he missed the James Bond themes melody....

I blethered briefly with the gamekeeper in his 4x4 on the way down, who seemed likewise good spirits. Back at the car I reflected that I had been similarly lucky last year with my first outing (Beinn a'Bhuiridh). Corbetts seem to be a good way to kick things off.
Click to mark this as a great report. Register or Login free to be able to rate and comment on reports (as well as access 1:25000 mapping).