I was fiercely deluded to think that we might be in for a hot spell after last weekend’s wall-to-wall mid-March sunshine on the Berwyns but just a glimmer of the yellow stuff might have been nice.

With Other Half safely surfaced from the Six Nations and the last remnants of the post-match hangovers gone I was delighted to have my walking buddy back. I am keen to push the ankle gently but firmly and decided it was time to reacquaint it with Snowdonia! However, Other Half is less keen on winter conditions than I am and with the high number of mostly avoidable accidents on Snowdon and surrounding peaks in recent week, many of them down to snow and ice, we decided not to go looking for difficulties.

By the time we reached the car park at Llyn Padarn it was cold, the wind was whipping up little white horses at the lake and the cloud was sitting in a broad mantle at around 2000 ft.

Undeterred we suited and booted up and headed through the alleyway from the playground, up towards the Spar, left then right up Capel Coch Lane with its imposing chapel near the upper end, before turning into Stryd y Ceunant. This is a sustained ascent on a good tarmac road through fenced grazing land and you rise past the youth hostel, skirt a few farms and, still climbing, reach an isolated home with an enviable treehouse and rope bridge across the stream (leave me there and collect me at the end of the day!). The tarmac ends with a bridleway to the right and a good clear Permissive Path off to the left, which we turned onto and plodded alongside a stone wall, enjoying what we could see across the valley to the Glyders.

After crossing the Afon Hwch, looking starkly beautiful and clear as it fell from Llyn Dwythwch high abovein spate over a series of small falls guarded only by a solitary skeletal tree, the track started to head uphill and swung right with Moel Cynghorion in front of us. After passing a lonely farm marking the last dwelling outpost, the bridleway became a solid stony path wide enough for one person under the steep flanks of Cefn Drum on the right, the views to the left opening out onto a well-fed river valley and the Llanberis Path weaving its way up Snowdon on the other side. We watched a solitary train puff its way up the mountain as overhead we got our first of the day’s three sightings of the RAF Search & Rescue helicopter which disappeared into the Pass over Clogwyn Mawr.

All of Snowdonia ancient, historical and present could be seen in one sweep – the timeless mountains, the slate spoils, lonely ruins of sheepfolds all around us, the Victorian obsession of the Snowdon railway and the modernity of the yellow Sea King, sadly to be but a distant memory in our skies soon.

The path crunched its way around and up through Maesgwm under Cefn Drum, always steady underfoot and leaving you free to enjoy the grandeur in all directions. After a short stiff clip up to the col we were rewarded with magical views of Snowdon, the Snowdon Ranger path weaving in zigzags on the “safe” side of the giddying drops off Clogwyn Du’r Arddu, Snowdon’s shoulders draped in a cape of cloud, snow and ice and, ahead of us, the Beddgelert Forest, Llyn y Gader and Llyn y Dwyarchen beneath Mynydd Drws y Coed, the Nantlle ridge, Moel Hebog – all rising and falling into the distance like an enormous wrinkled tablecloth of rock across the surface of the land. Carrying on over the col will bring you down to the Snowdon Ranger Path just above the lower zigzags but our plan was to climb up to then cross the ridges across Foel Goch, Foel Gron, above Cwm Cesig and up to Moel Eilio.

From the col at 1532 ft there is an energy-sapping climb over grass to the summit of Foel Goch (1984 ft) and although I tried to follow the terraced bootprints of an earlier kind soul I soon realised that s/he had a far bigger stride (and feet!) than I have and the only thing I was achieving fast was a bad mood, scaring off even the ravens with my muttering and cursing.

As is always the case, as soon as I reached the grassy mound of Foel Goch I thought “Well, that wasn’t so bad, was it?” and wondered what all the fuss had been about…..

However, a quick hop and a step over a ladder stile in the fence revealed a loss of nearly all that height gained, about 300ft of it, into the col between Foel Goch and Foel Gron, only to have to regain nearly all of it again on a similarly grassy, foot-terraced path above the cliffs to the 1945 ft summit of Foel Gron. This was when the clouds chose their moment to lift and we could see the rollercoaster ahead of us – another dip then a bigger climb to the unnamed peak above Cwm Cesig (2063 ft) and finally another dip into Bwlch Gwyn before the final 420 ft climb to the summit of Moel Eilio.

Just as quick as it cleared the cloud came scudding in again and the wind picked up as we climbed higher, making it difficult to place walking poles firmly on the ground as the wind caught them. Down in the little cols a westerly raced through, clearing cloud to give tantalising views of the Rivals rising straight out of the sea on the Lleyn Peninsula, the tip of Newborough on Anglesey almost touching the nose of Wales by a couple of hundred yards in the Menai Straits – then you’d look down to get your camera and by the time you looked up it was gone again in a wall of damp murk. As I contemplated the final haul up Moel Eilio I wondered if impatience might be getting the better of me and opted for a deliberately slow pace – the fables about the tortoise and the hare were proven right as, all of a sudden, we found ourselves entering the snowline then quite unexpectedly on the summit of Moel Eilio and watching the ridge we had walked along playing peek-a-boo in the racing cloud. 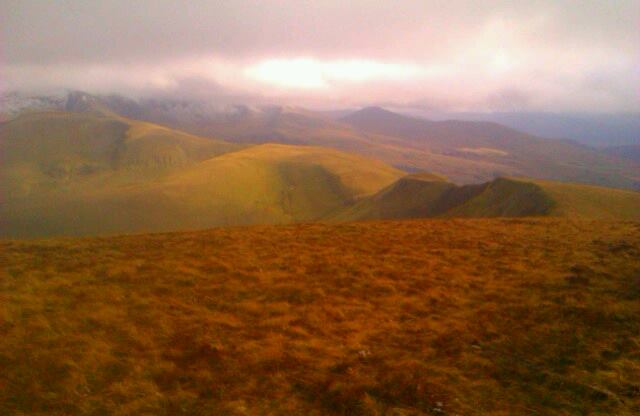 An enormous stone shelter gave a small amount of respite from the relentless wind, although it still found ways through the gaps beneath the stones and coated our shoulders with its icy breath. As ever, that sandwich picked up with a grimace in a corner shop that morning and stowed away with a grim “Well, at least it’s there if I need it” suddenly becomes gourmet cuisine up there and you don’t even need sugar in your tea because everything just tastes sweet and glorious!

However, manhandling sandwiches in mountain gloves meant there was very little grace or delicacy in our eating and it really wasn’t a day for lingering and smalltalk so after a break of about 15 minutes we stowed everything way, made sure we have left no trace except footprints and crossed the stile to take the good path down over Bryn Mawr towards the Donen Las plantation.

Above the plantation we swung right on an unmarked track on the ground to join the path beneath slate spoils down to Maen Llwyd Isaf.

I “body” for SARDA Wales (Search & Rescue Dog Association) and exactly a year earlier, on the first day of the disastrous late snow, I was bodying and ended up having to put myself into a ruined cottage to keep warm whilst waiting to be found. So on Saturday I stopped to take a photo of a ruined cottage and commented to Other Half that it reminded me very much of the ruin I had snuck into last year when I was bodying, for shelter when the weather struck, and found myself with two sheep skulls for company, all I needed was the small boy with the banjo and a pair of tap-dancing hillbillies. It was only when we got home on Saturday and I was going through my photos that I realised this *was* the ruined cottage I had sheltered in last year! As we descended beneath the cottages we were struck by immense hailstones and a couple of minutes later a colossal flash of sheet lightning filled the valley, followed by a crash of thunder that shook your fillings and reverberated for ages around the mountains. We were extremely glad to be off the hill and approaching the village by now, where the hail made it look as though there had been a heavy snowfall. No excuse needed for a takeaway that night and a sense of real satisfaction and being out on the proper hills again, away from my comfort zone of the Berwyns.
Click to mark this as a great report. Register or Login free to be able to rate and comment on reports (as well as access 1:25000 mapping).


Another gorgeous day - another Berwyn bimble!