I am a 48 year old man who's passion for the hills only started during the 2nd lockdown of 2020.

I consider myself reasonably fit and after about 10 months of hillwalking with my 20 year old son we ended up bagging over 20 munros, making a good few mistakes along the way, wrong paths,  upside down maps and poor distance judgement to name a few.

After doing Buachaille Etive Mòr in Glencoe and getting a good taste of scrambling we were eyeing up the nearby ridge for our next adventure, the Aonach Eagach.

We watched YouTube videos of it, read reports, studied maps, even heard the horror stories of how many times Mountain Rescue are called out to this ridge and the surrounding area.

We watched people climb it without a rope, ok so you dont need a rope, it must be pretty easy then. We'll be fine... right?

But there was the first mistake right there.

The mindset, we'll be fine.

We didn't plan for what if we're not fine.

We parked in the 3 Sisters Car Park nice and early on a fairly cold September morning.

The day looked promising, it had rained the day before but there was a hint of blue sky and the excitement of what lay ahead drove us on.

Today was going to be the day we would conquer the mighty Aonach Eagach!
Bragging rights to our fellow hillwalkers and family forever more!

Looking up there would be a few low clouds threatening the high tops, dark grey, moving along quickly enough to allow the blue sky to keep the mood positive, its all good.

Ascending the scree paths and reaching the first small scramble of the day gave us a taste of what lay ahead.

Feeling uninspired with confidence on the quality of the rock after our first section we stopped for a break and time to make a huge decision here.

Now...
Before we go any further and knowing what's up ahead.
(Looking over to the 3 Sisters) should we go back down and just enjoy an easier route across the road? or march on?

*Thoughts* There is still a hint of blue sky through the grey clouds... it might brighten up?

Being the Dad and not wanting to ruin my sons day in the hills and the experience of this magical place, of course, we marched on.

(In hindsight, the better lesson would have been to know when to turn back or plan for a change of plan!)

The first drop down after the first Munro Meall Dearg was a bit hairy but ok.

By this point we knew what we were in for, the challenge was set. The rocks were real greasy and you can feel your boot can lose its grip at any time.

The real Ridge climb began, taking it slowly, deciding on every move, anticipating a slip and staying clear of the real exposed areas where possible.

Up the small chute, this took a couple of tries with not much grip underfoot and the handholds just as bad it was difficult to pull up onto the ledge but we made it.

Up to this point I think adrenaline was driving me on, each section had its own challenge which we overcame but then everything changed at the crucial point of the traverse.

The wind picked up, the clag came in thick we could barely see the next section.

It started snowing, hail blowing into our faces. Those greasy rocks just got even more slippy and the last ridge climb before the pinnacles drained the energy right out of me to the point my legs were cramping trying to cling on to the rock face.

I started to panic, not just for me but for my son. He didn't seem too phased, he's younger and fitter than me.
From here on the last thing I was thinking about was taking photographs 😄

We reached the base of the Crazy Pinnacles and 4 people in front of us who were making good time all the way through had suddenly stopped, struggling to make this final climb in these conditions.

The Crazy Pinnacles are the most exposed parts of the whole ridge, they looked like evil fingers sticking up from a claggy monster ready to grab anyone failing their 3 points of contact rule and pull them into a never-ending drop to Hell. Or worse. 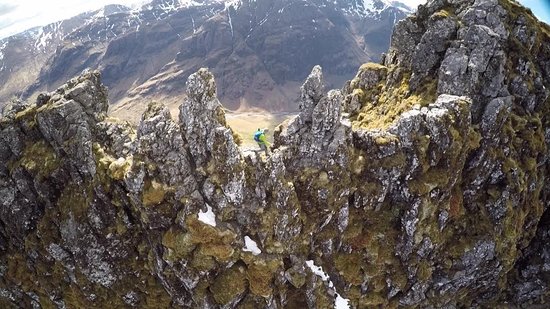 2 people had just come up from below the Pinnacles trying to get off the hill saying "there's no way off we have to move on".

I took 1 look at the worried faces of those coming up and those climbing the pinnacles and thought, "no".

Just no.
I'm sure I heard myself say it out loud but didn't mean to.

Its too dangerous, the winds too strong, the rocks are too slippy.

I would rather take my chances going down than go up again and fall off.

I wasn't thinking straight. Everything seemed blurry.
Turning back didn't seem like an option, my legs are crampy.

We tried to decend. We could see some steep drops every way we turned but we eventually reached a steep drop, it was about 8ft.
We dropped down onto a ledge, ever hopeful that we would find a way round to the other side or down, anything other than up and over those towering snowy rocky fingers of doom.

Once on the ledge it became clear quickly we'd reached a dead end.
The ledge was was barely 3ft wide and only 2ft of it was safe. We were sheltered, safe, but now stuck.

At this point I was so tired, exhausted, scared. I was contemplating picking up the phone and calling for help.

I desperately needed to get us off this hill now, I was scared for my sons life, blaming myself and how I could live with myself if anything happened to him.

After 5 minutes rest and gathering of thoughts we started looking up again to see if we could climb a 6ft section to get around some more but everytime I tried my leg cramp wouldn't let me.

My son managed to climb it, he went on a bit further and had a look for a way out. There was a way, he said, and it leads on to the path ahead of the Pinnacles. If we can climb this we're through!

After a few more attempts I had to just grit my teeth and ignore the cramp pain and get up that last bit rock which I did and hobbled on to find the path about 10 minutes later, beyond the Pinnacles, thank God.


Of course being Scotland, the weather had improved but for those of you who have done this walk before you'll know it isn't over at the end of the ridge.

You've still got another Munro to climb, easy enough if you haven't half killed yourself trying to climb off a mountain, been battered with wind, snow and clag and suffering from a bad cramp.

The final stupid move of the day came next. We thought we could see a way down before the last climb so we could drop off the hill this time and save going up the way with an injury.

Steeply down the scree slope we went for about 100 metres until we were stopped in our tracks by another sheer 50ft drop.

By now I was considering the consequences of throwing myself off the edge and my survival rate.

Maybe if I was alone I would have, thankfully my sons here to keep me sane.

There was nothing else for it.

Back up to the path.

Do the final Munro, then off the hill on the other side as planned.

Which we did, painfully.

One final look back at the Pap of Glencoe as we phoned a Taxi to take us back to our car.

Not my favourite day out but one to definitely learn from.
The Aonach Eagach ridge knocked my confidence for a good few weeks but confidence comes with knowledge and experience so since then..

We've taken up Bouldering and Top roping working up to Lead Climbing to learn basic rope techniques for the hills. An extra safety measure if we ever need to change plans plus the strength and fitness benefits for more technical scrambles that we enjoy.
Navigation Courses and Mountain Skills Courses with Mountaineering Scotland with a Winter Skills course coming in January and will also take the Scrambling Course next Summer.

The plan is to do the Cuillins of Skye for my 50th.

Happy Walking, stay safe ✌
Click to mark this as a great report. Register or Login free to be able to rate and comment on reports (as well as access 1:25000 mapping).