2020-03-19.gpx Open full screen  NB: Walkhighlands is not responsible for the accuracy of gpx files in users posts

The third stage of the John Muir Way and it's tarmac and towpath almost all the way, but with a small sting in the tail at the end. 90% of the route is flat as a pancake, as you would expect for a path that follows a disused railway line and a canal for most of its length, but the final few kilometres involve a bit of modest elevation and leave the tarmac behind.

Following an eerily empty train journey to Milngavie and a similarly deserted bus trip to Strathblane, I was ready to head off about 10am. Starting from the Kirkhouse Inn, climb up Campsie Road for a few minutes and look for the start of the old railway path on the right. Before long you are in the very pretty countryside with the Campsie Hills on your left providing visual distraction. 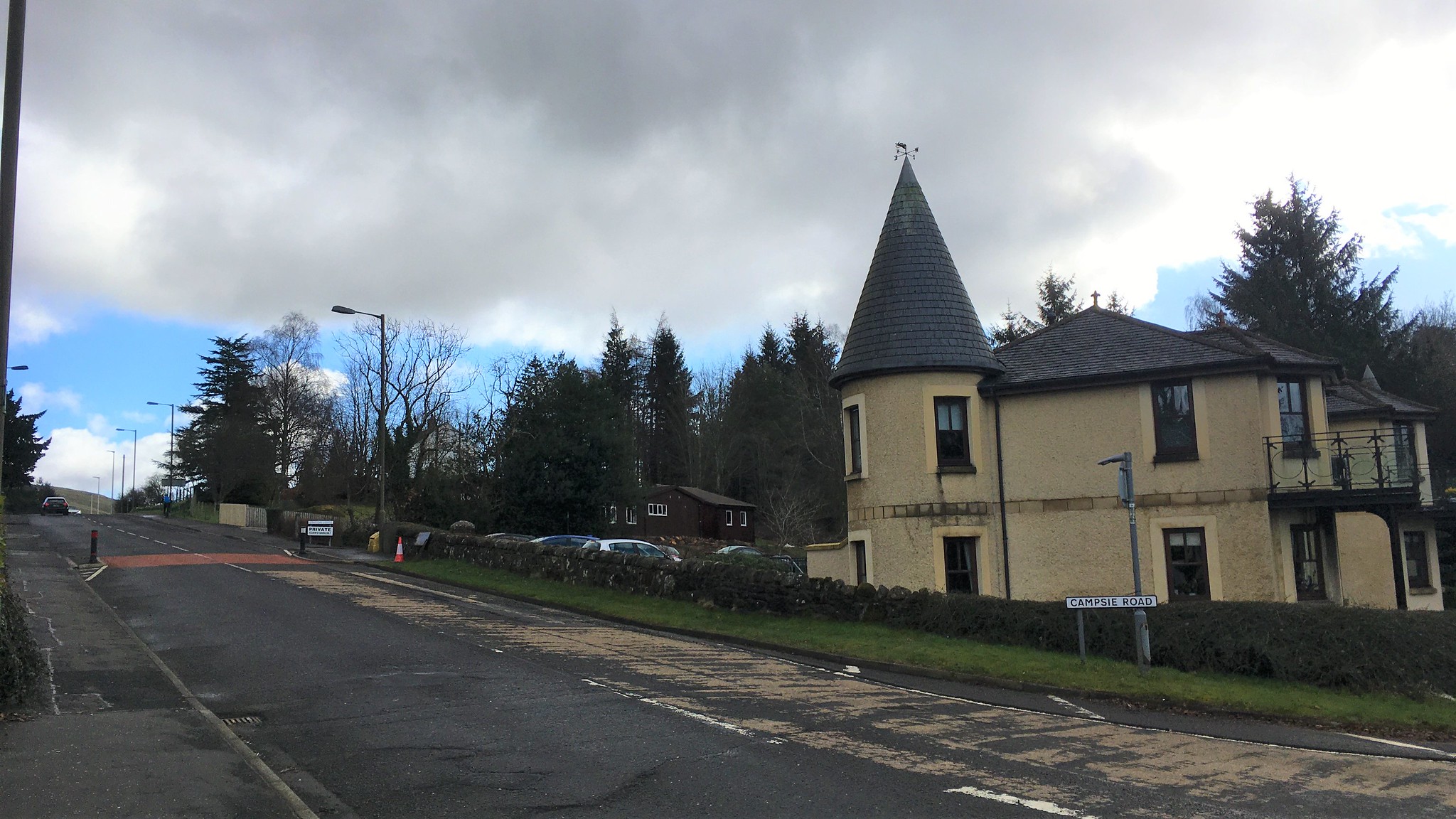 Head up Campsie Road at the big yellow house 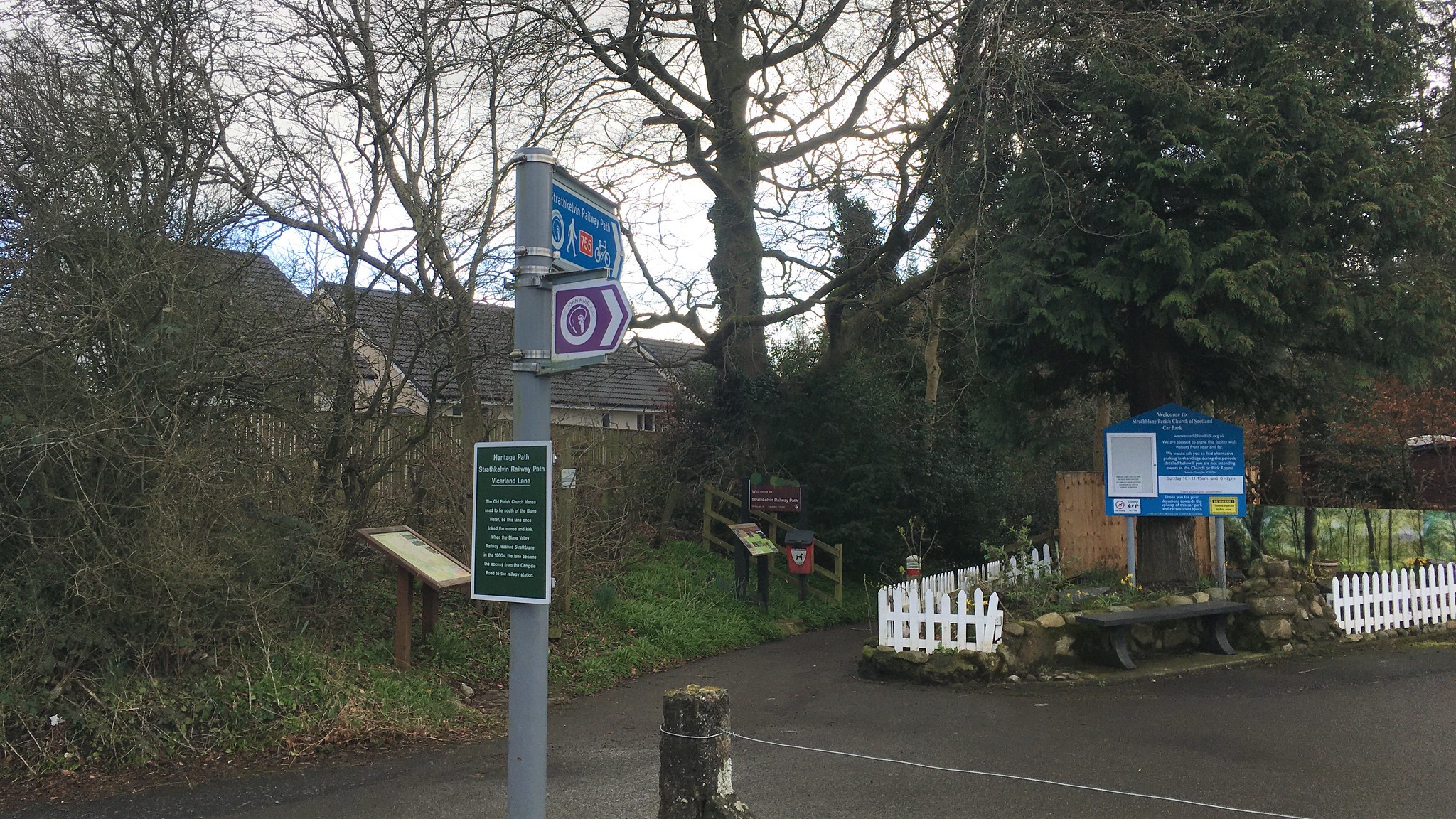 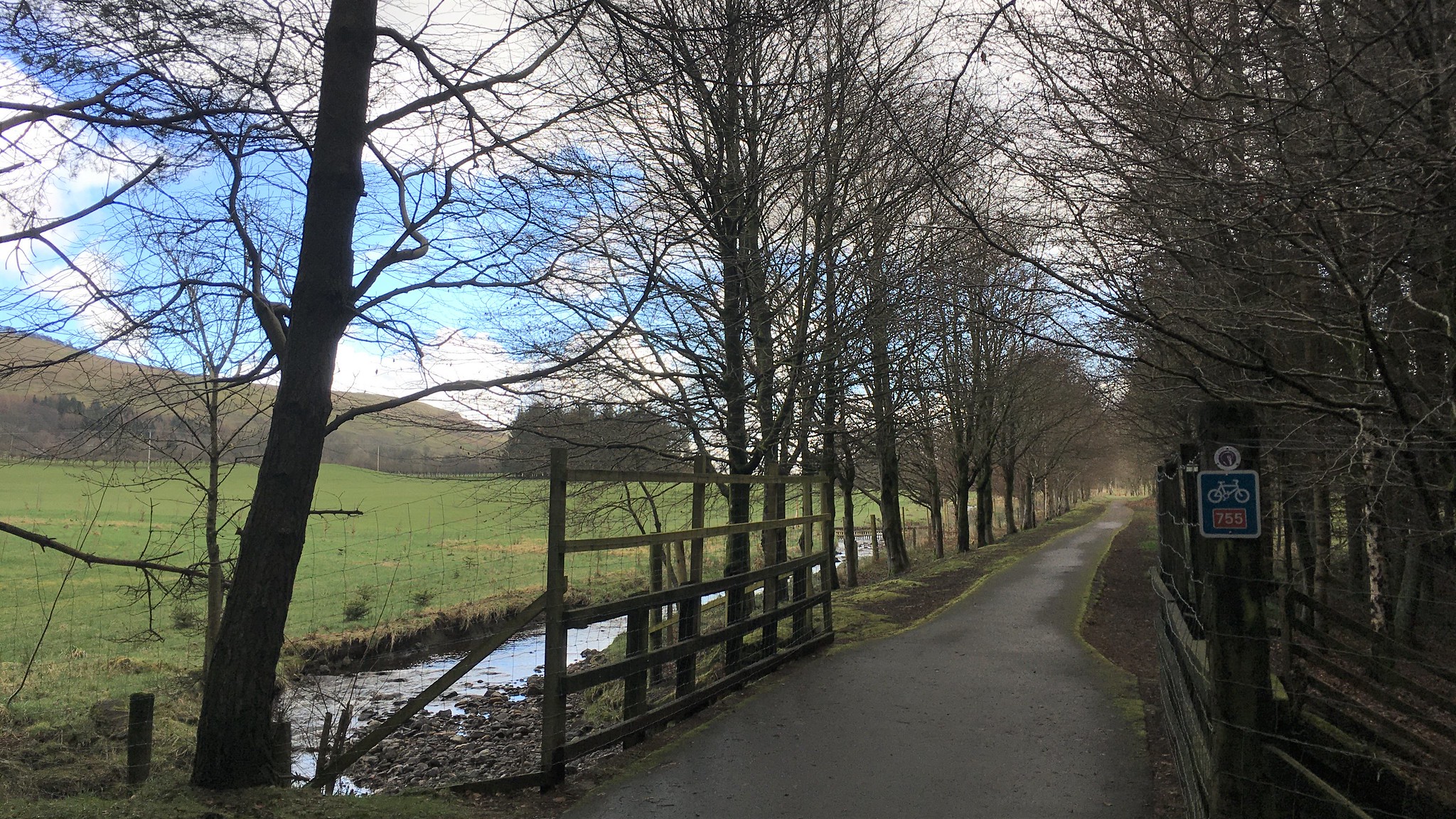 Before long you emerge from the avenue of trees lining the old railway line and Dunglass looms on the right with the sunlit Campsies stretching away on the left. 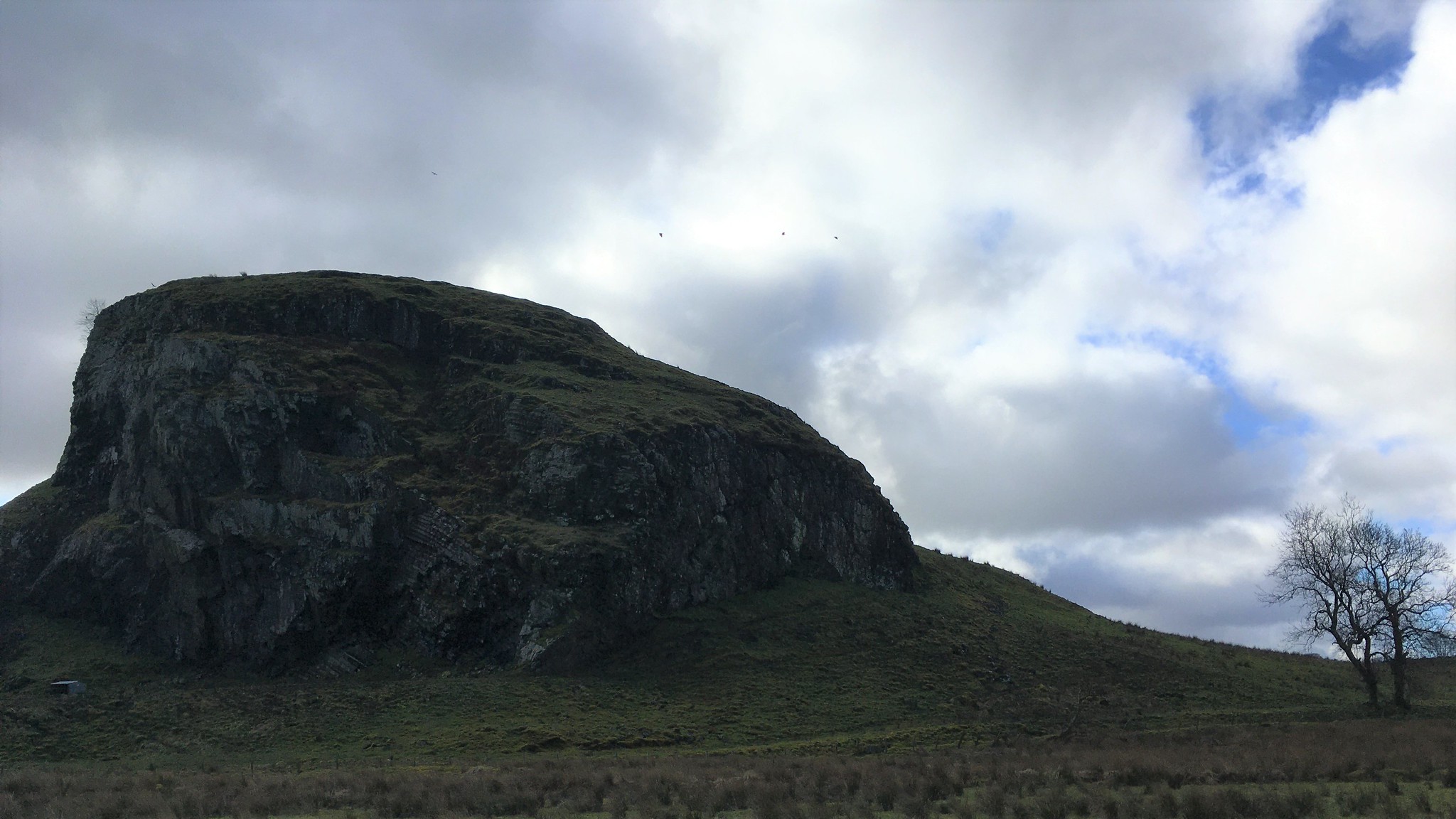 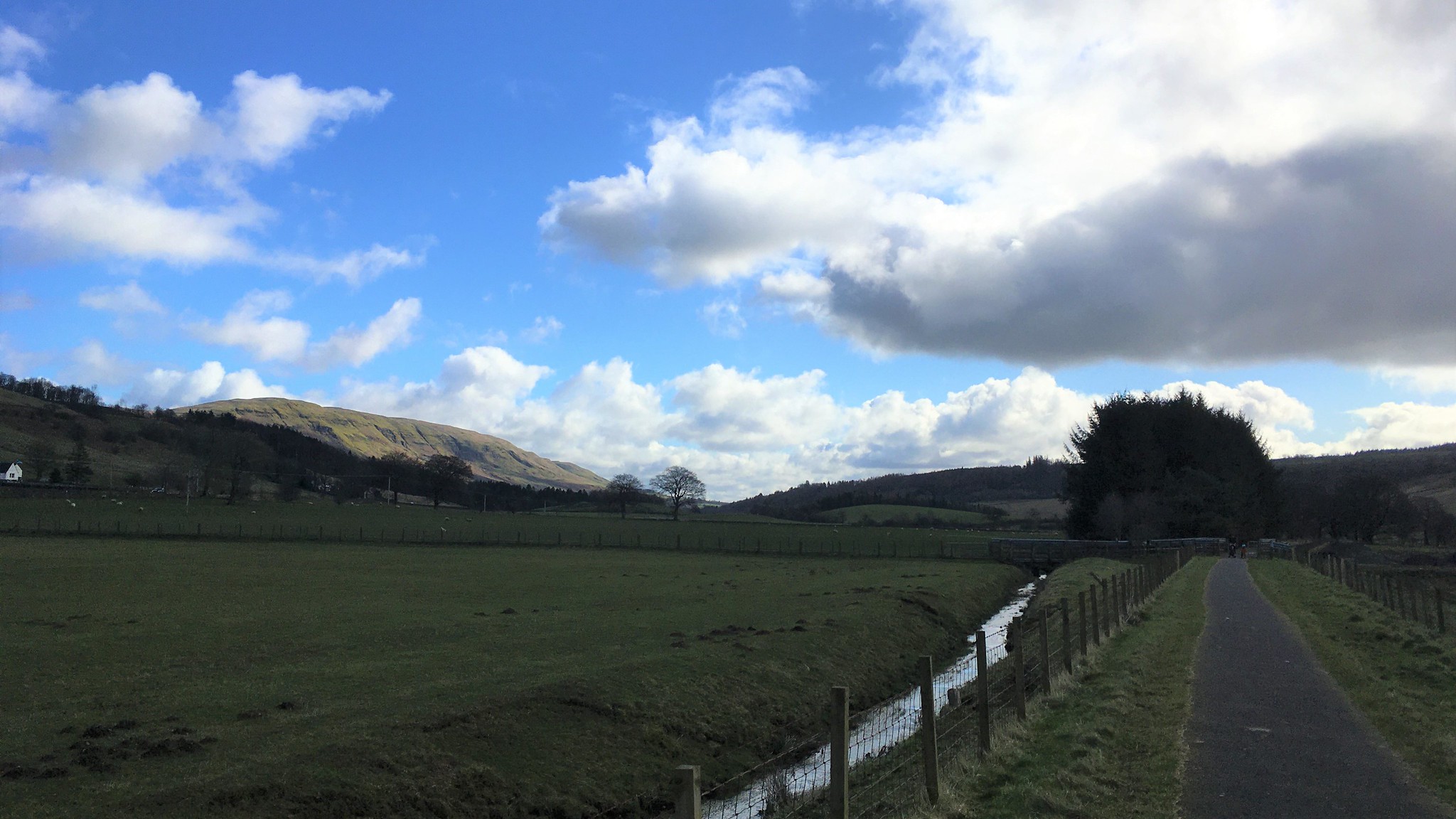 The weather was as nice as it's been all year, with no wind and lovely sunshine only occasionally interrupted by a passing fluffy cloud. However the evidence of recent persistent rain was everywhere, with flooded fields all along this stretch of the route. 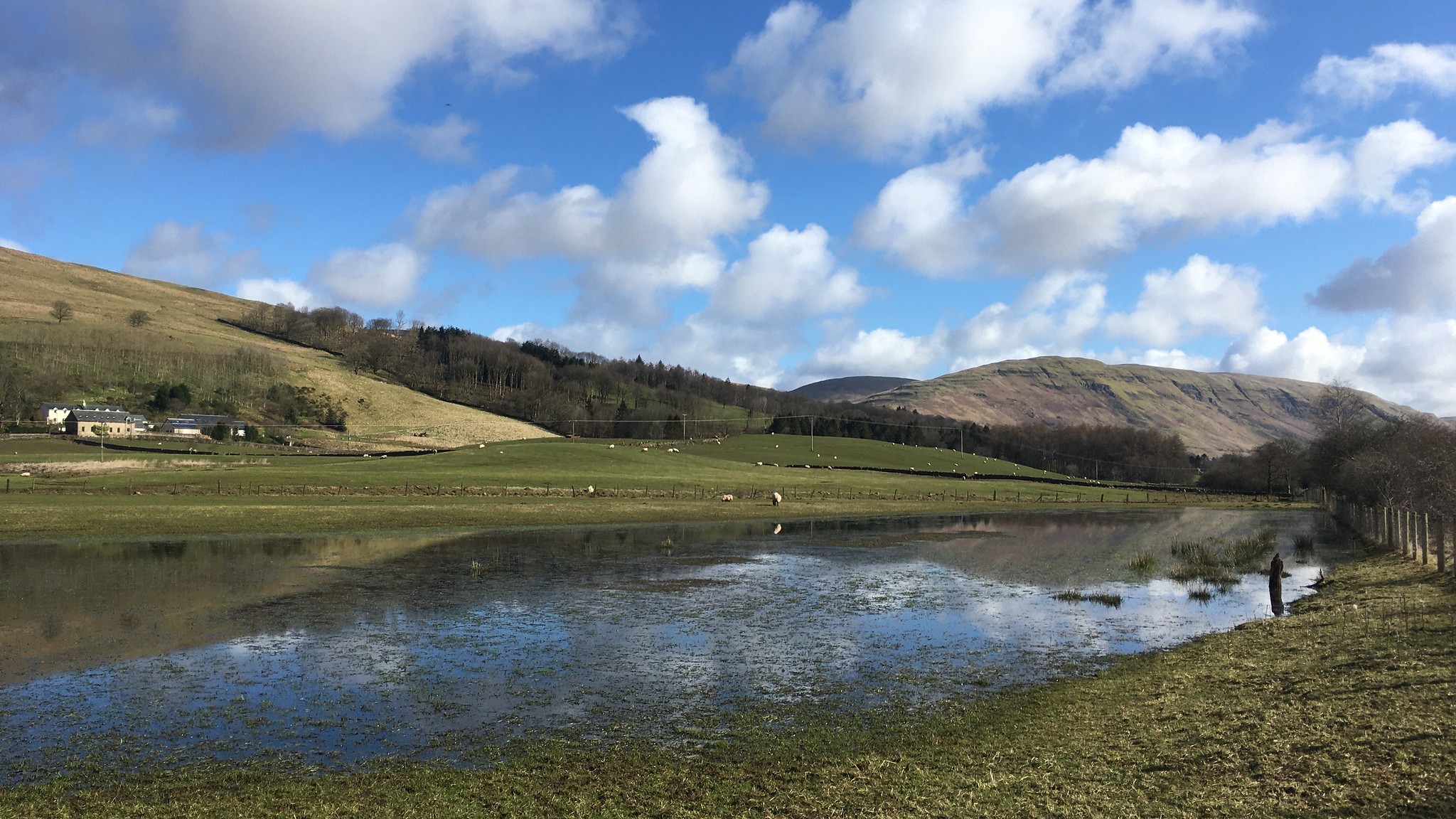 The occasional bridge reminds you that this was once a railway line that ran from Aberfoyle to Lenzie. 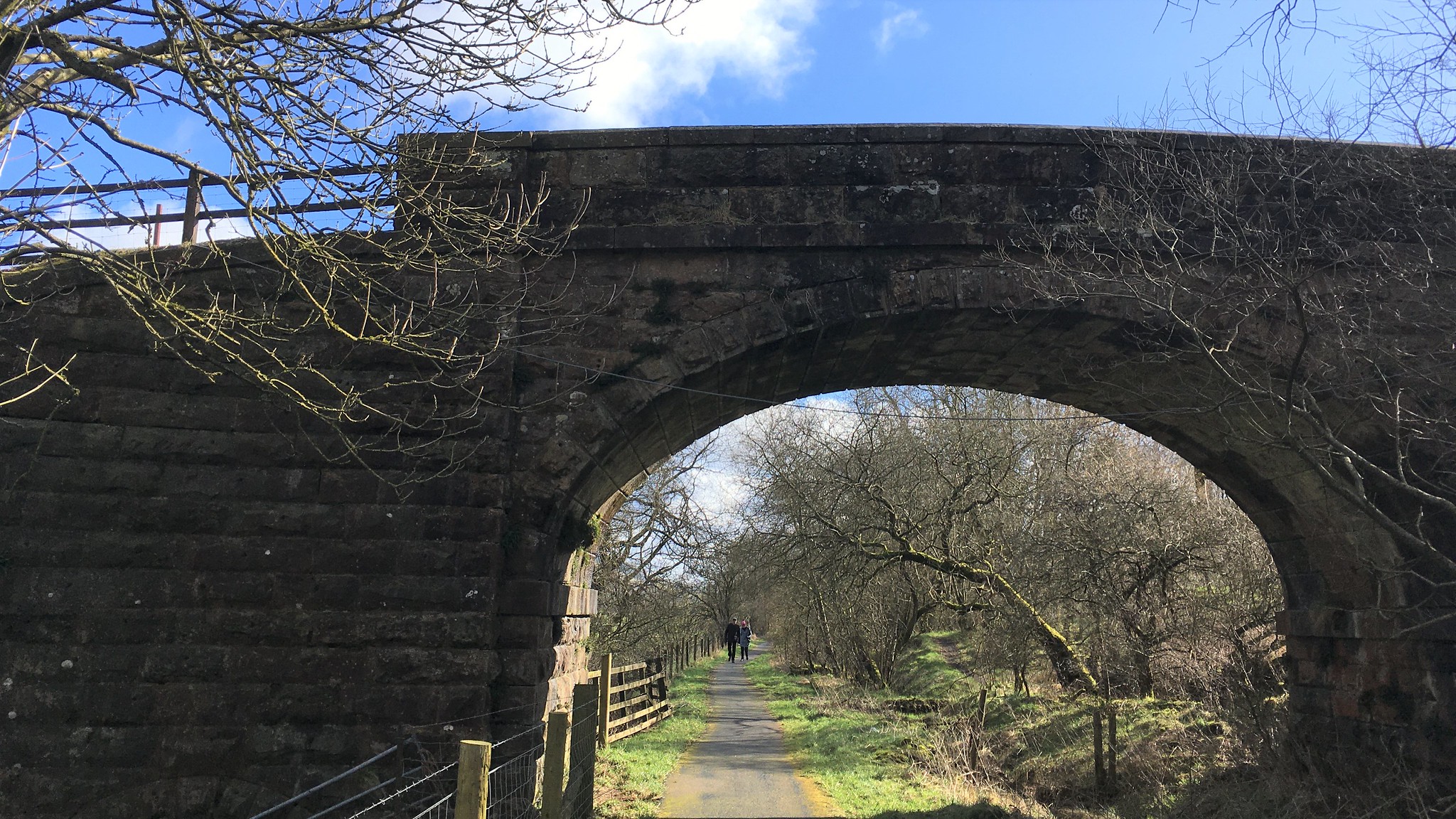 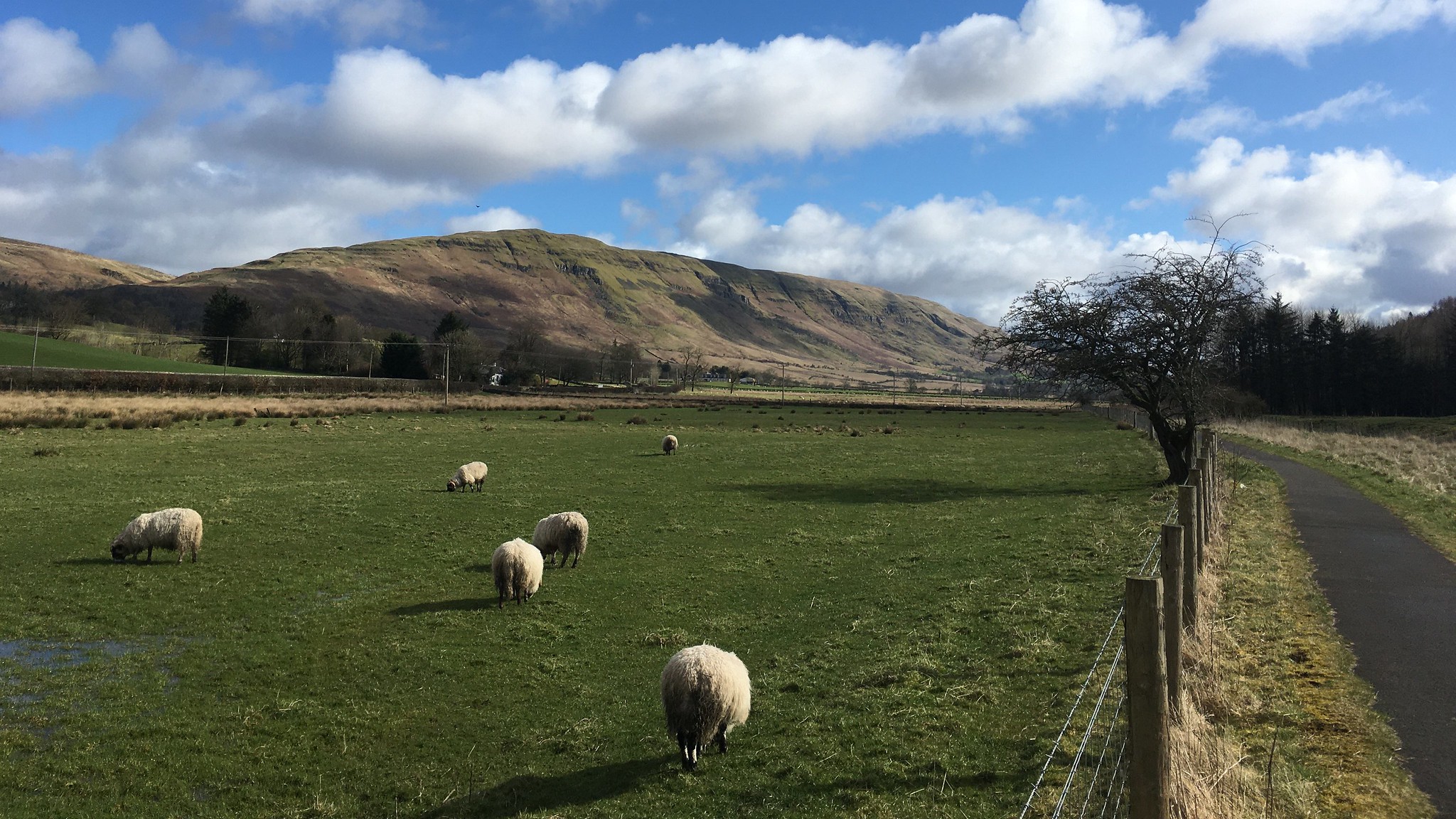 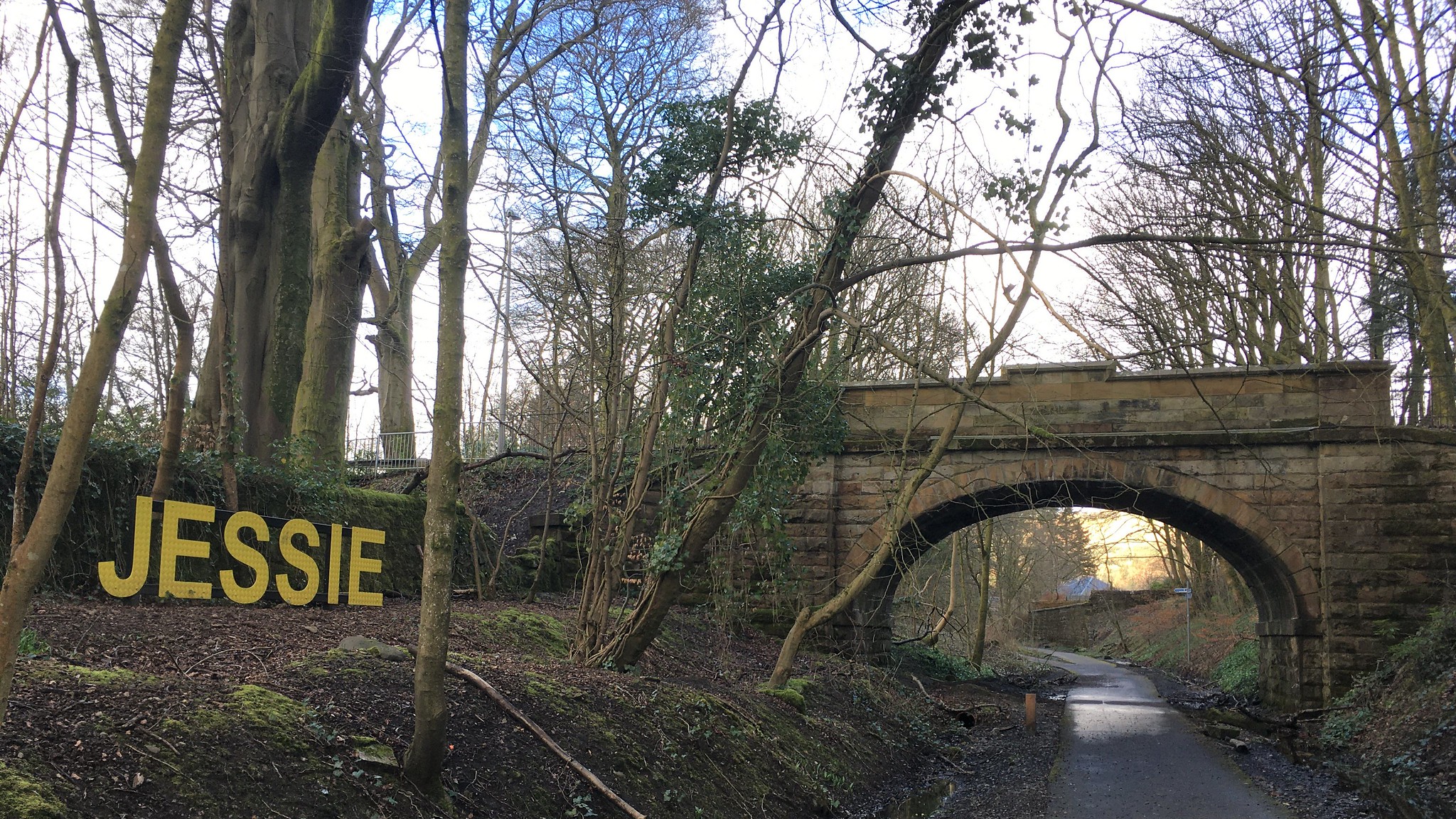 JESSIE is an artwork by Jacqueline Donachie - one of three such works commemorating the work of women in health and medicine in the area.

The path now skirts around the south of Lennoxtown, with the Glazert Water on the right providing distraction. I saw a pair of dippers zipping up and down the river all along this stretch. 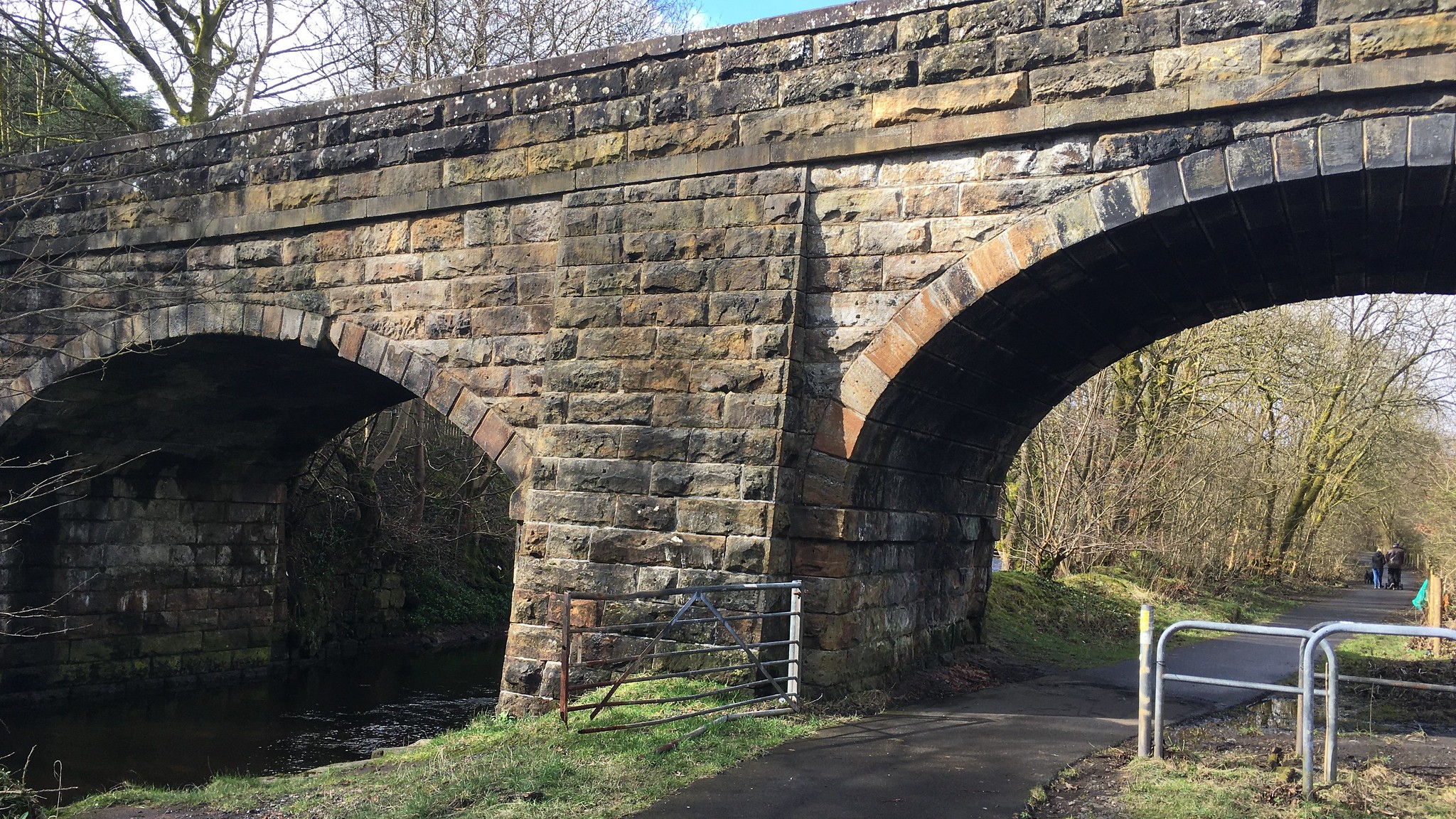 Bridge over the river and old railway line at Lennoxtown 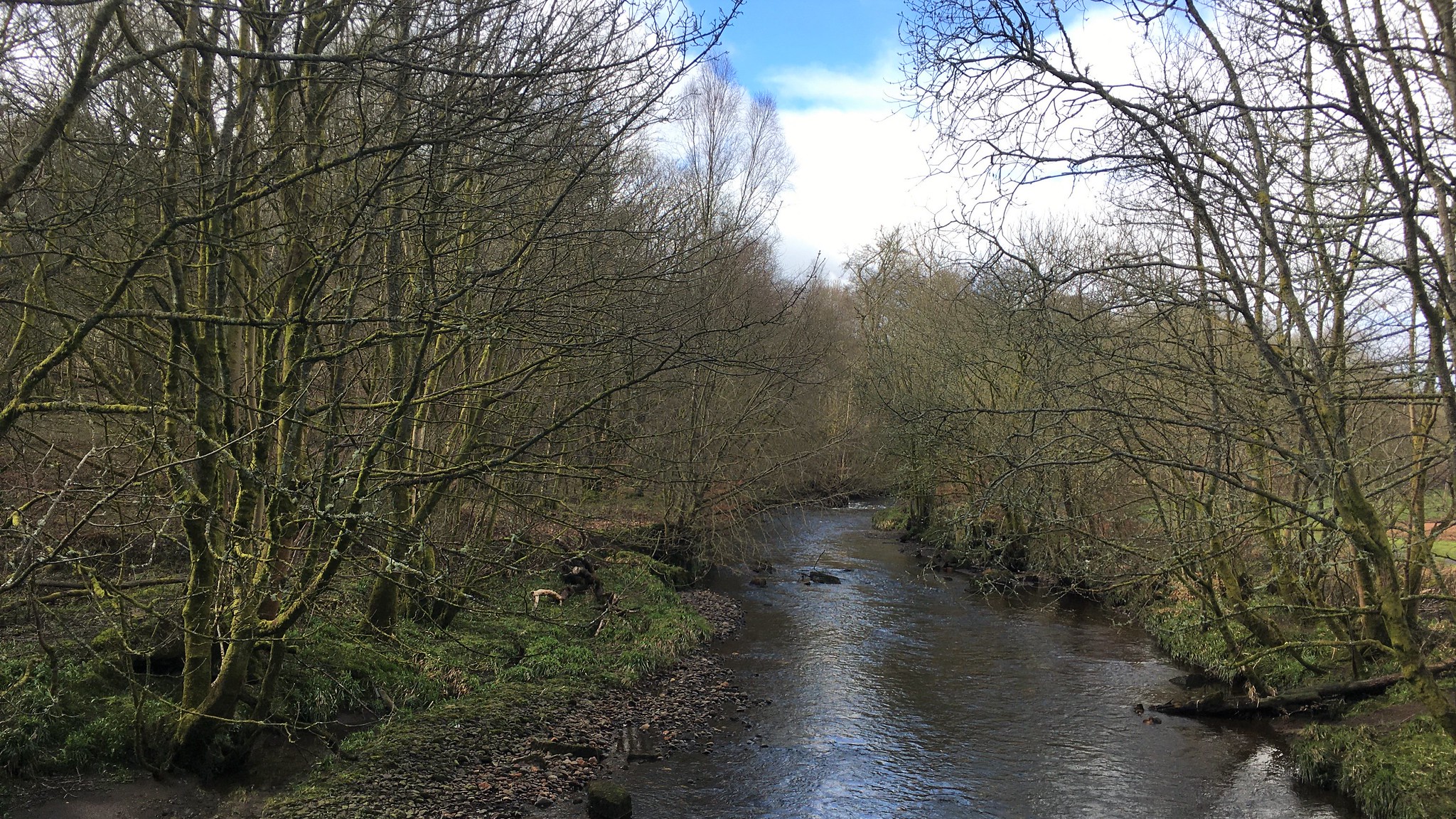 Despite all the dire warnings regarding coronavirus and the need to barricade yourself in your home, the path was quite busy - certainly the busiest stretch of the John Muir Way I've walked so far. It wasn't mobbed, but there was a constant stream of dog walkers, baby walkers, joggers and cyclists. It was nice to note that given how popular this stretch seems to be there was relatively little litter around.

A few kilometres after leaving Lennoxtown you arrive at Milton of Campsie, and the former use of the path is now plain to see. The locals have done a nice job of turning the old railway station into a pleasant park/garden. 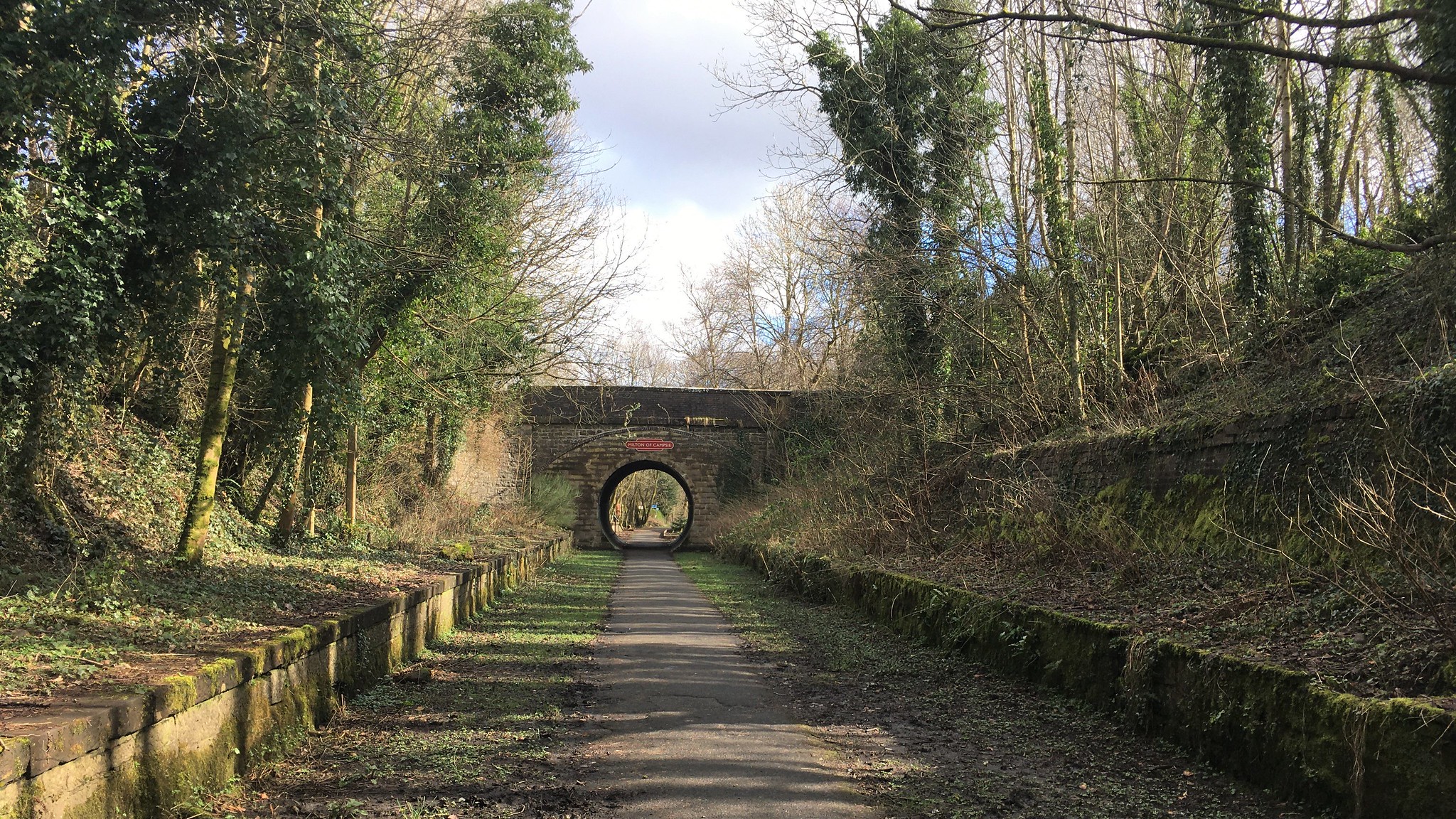 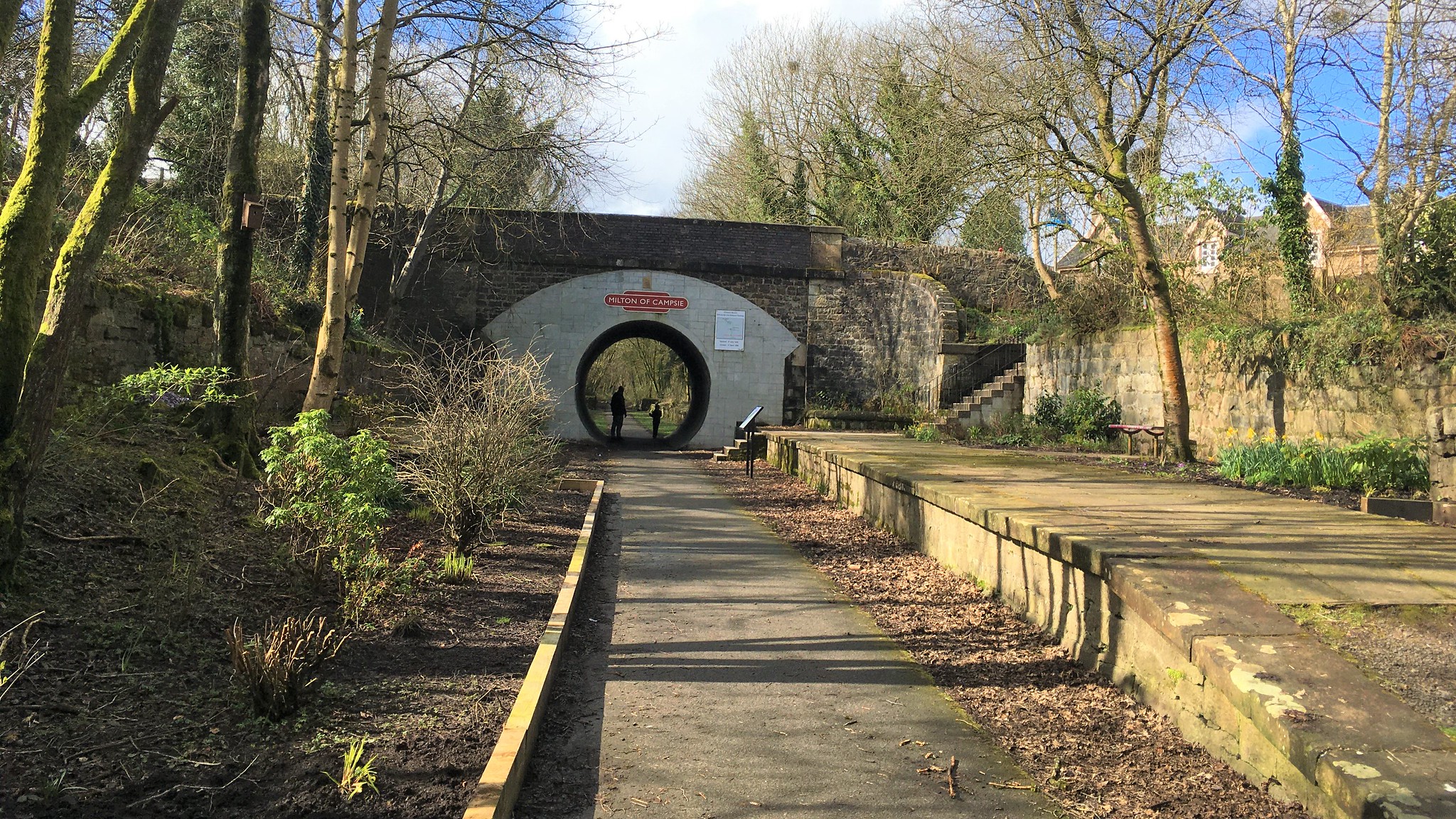 The path now heads south towards Kirkintilloch - the main town on the route and the logical place to re-fuel if needed. This is also the point where you leave the old railway line and head for the Forth & Clyde canal. This involves negotiating a bit of the town, but it's well signposted - just look for the round, purple JMW waymarkers, which lead uphill through a mini industrial estate to the canal. 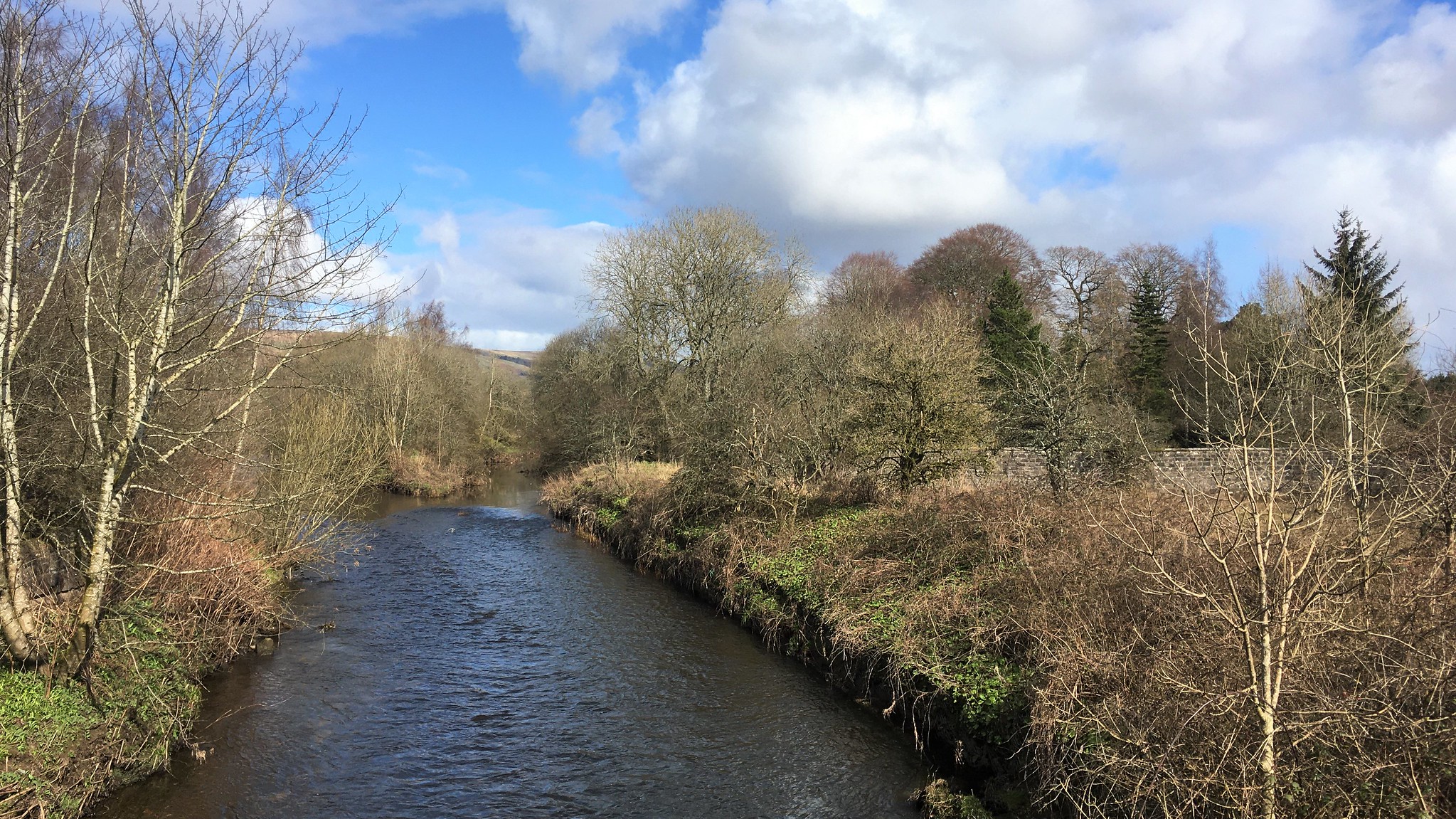 Crossing the River Kelvin at Kirkintilloch 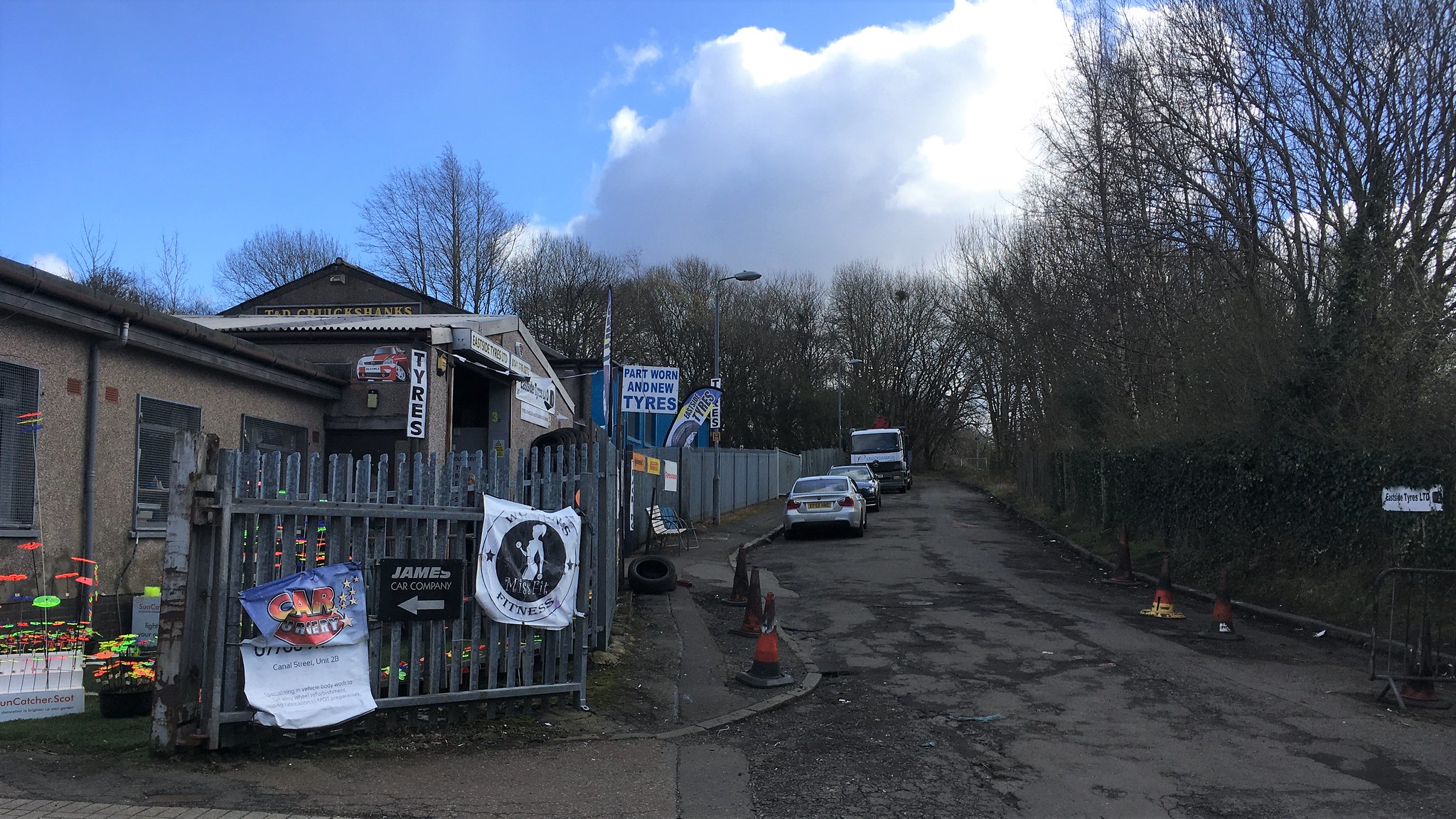 Road leading to the Forth & Clyde Canal 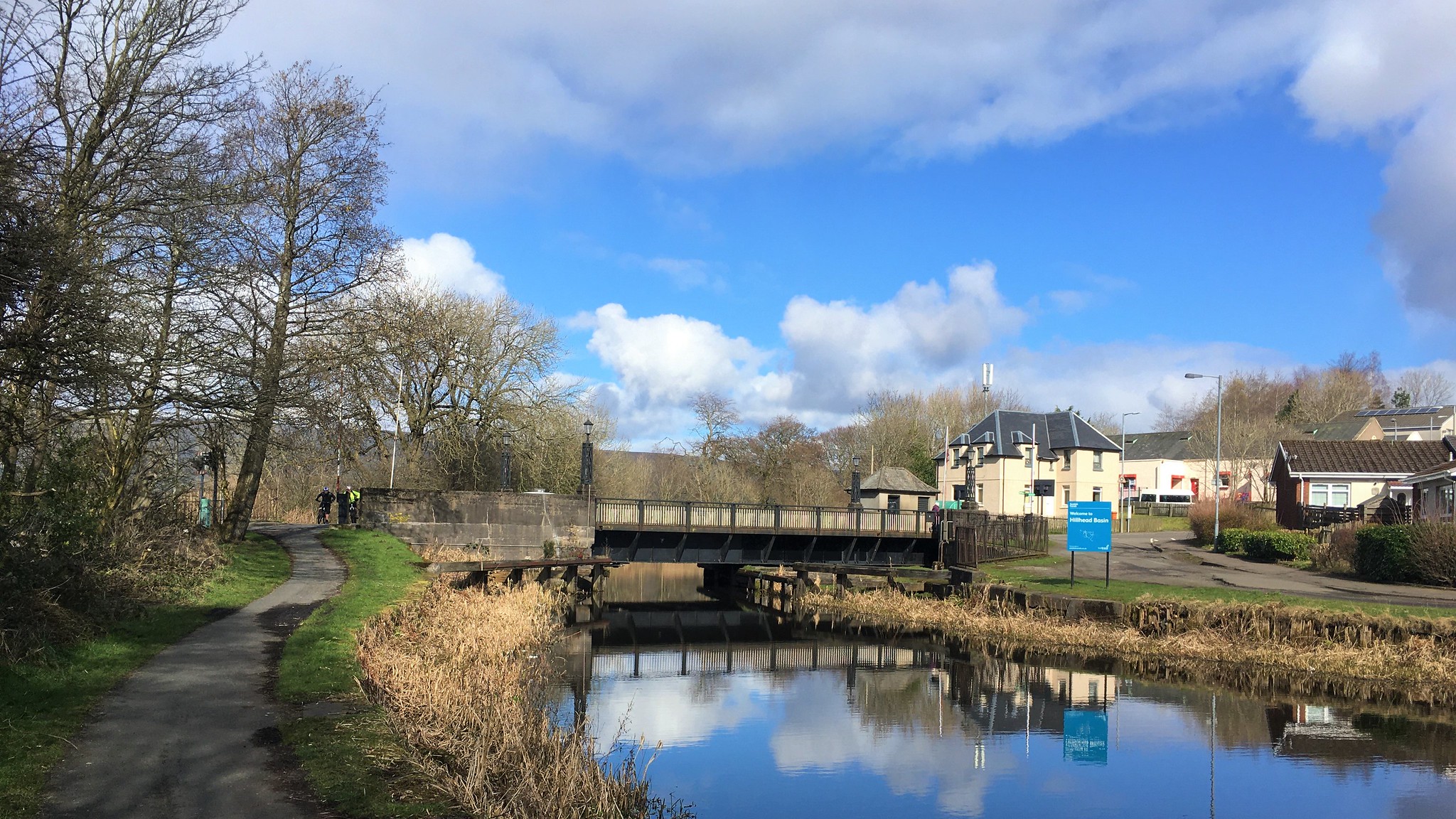 Forth & Clyde Canal at Kirkintilloch

Once on the canal towpath, it takes a while for the metropolitan bustle of Kirkie to be left behind, but eventually the open countryside reasserts itself. This stretch of the towpath has definitely had an upgrade since I was last along here on my bike about ten years ago. I remember the stretch between Kirkie and Twechar being a muddy, pot-holed mess of a path, but these days it's tarmac all the way. This was the quietest stretch of the walk thus far, which was a bit of a surprise. In fact it was so quiet I was distracted by what I thought was the sound of a distant aircraft or motorbike, but which turned out to be a full-on frog orgy going on among the reeds of the canal bank! They were making quite a racket... 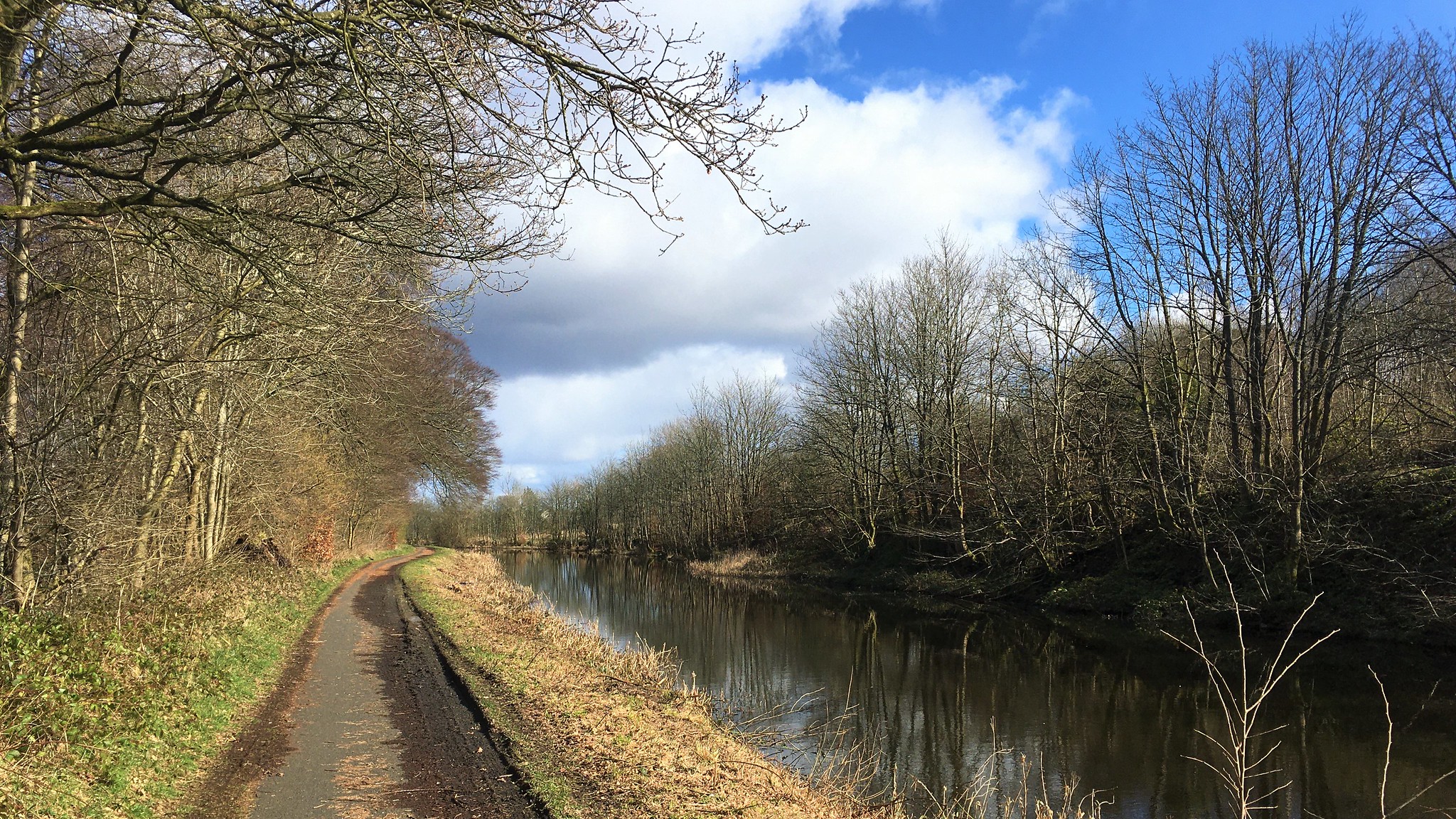 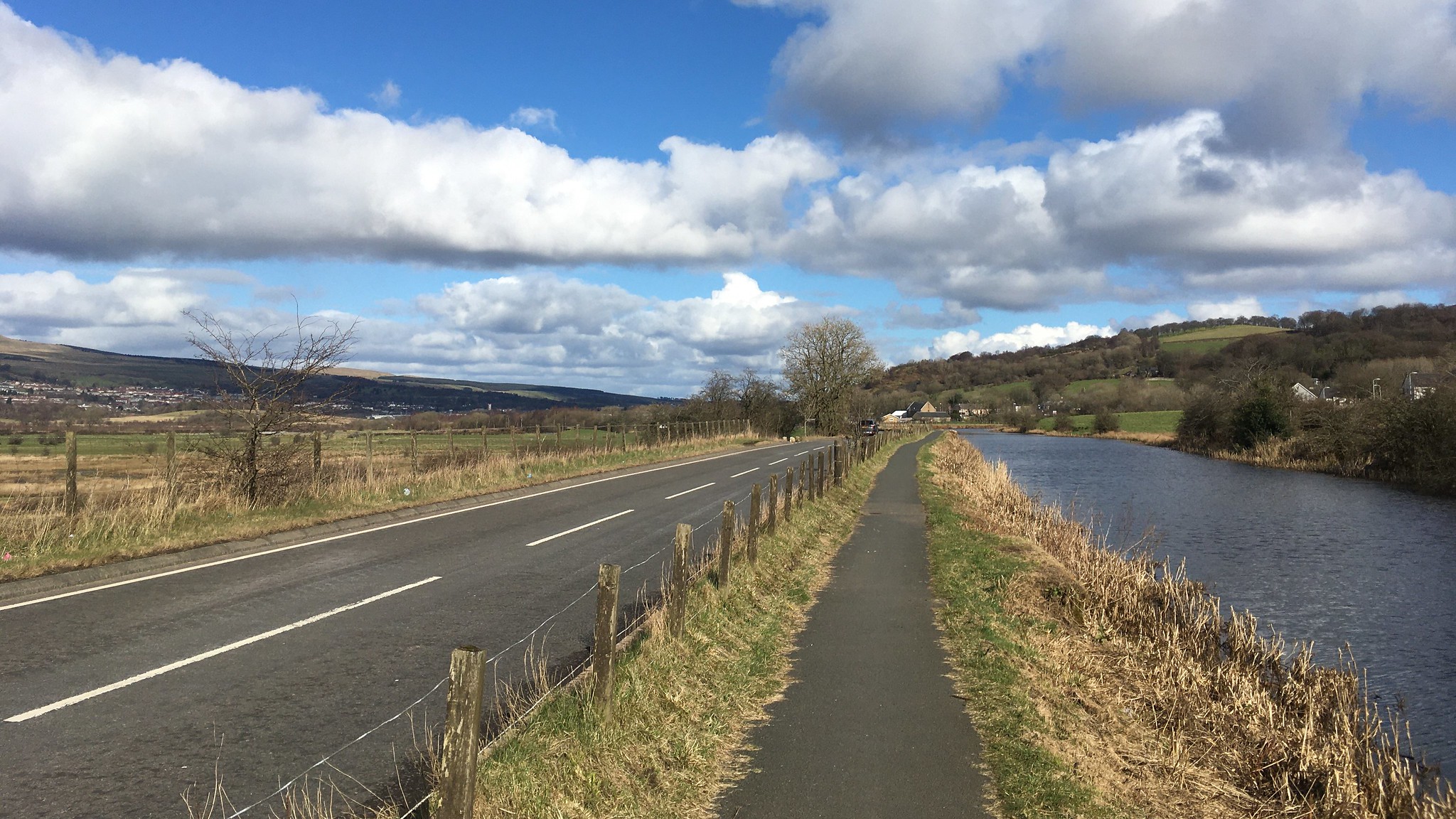 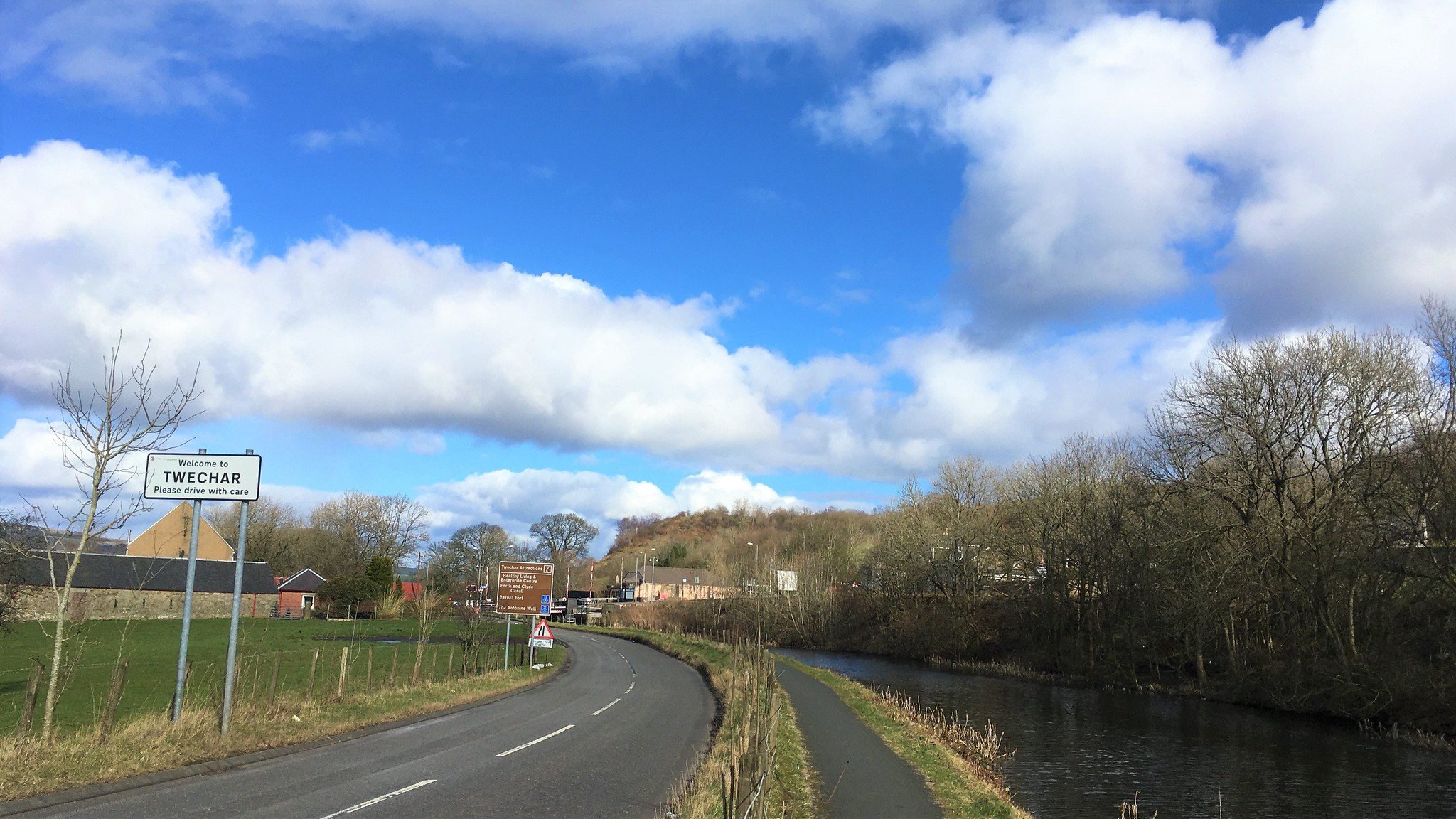 On arriving at Twechar, cross the bridge over the canal and head uphill on the road for a few hundred yards until you see the signs for Bar Hill off to the left. A farm track climbs past the farm and continues uphill before a path branches off to the left leading to the remains of the Roman fort. 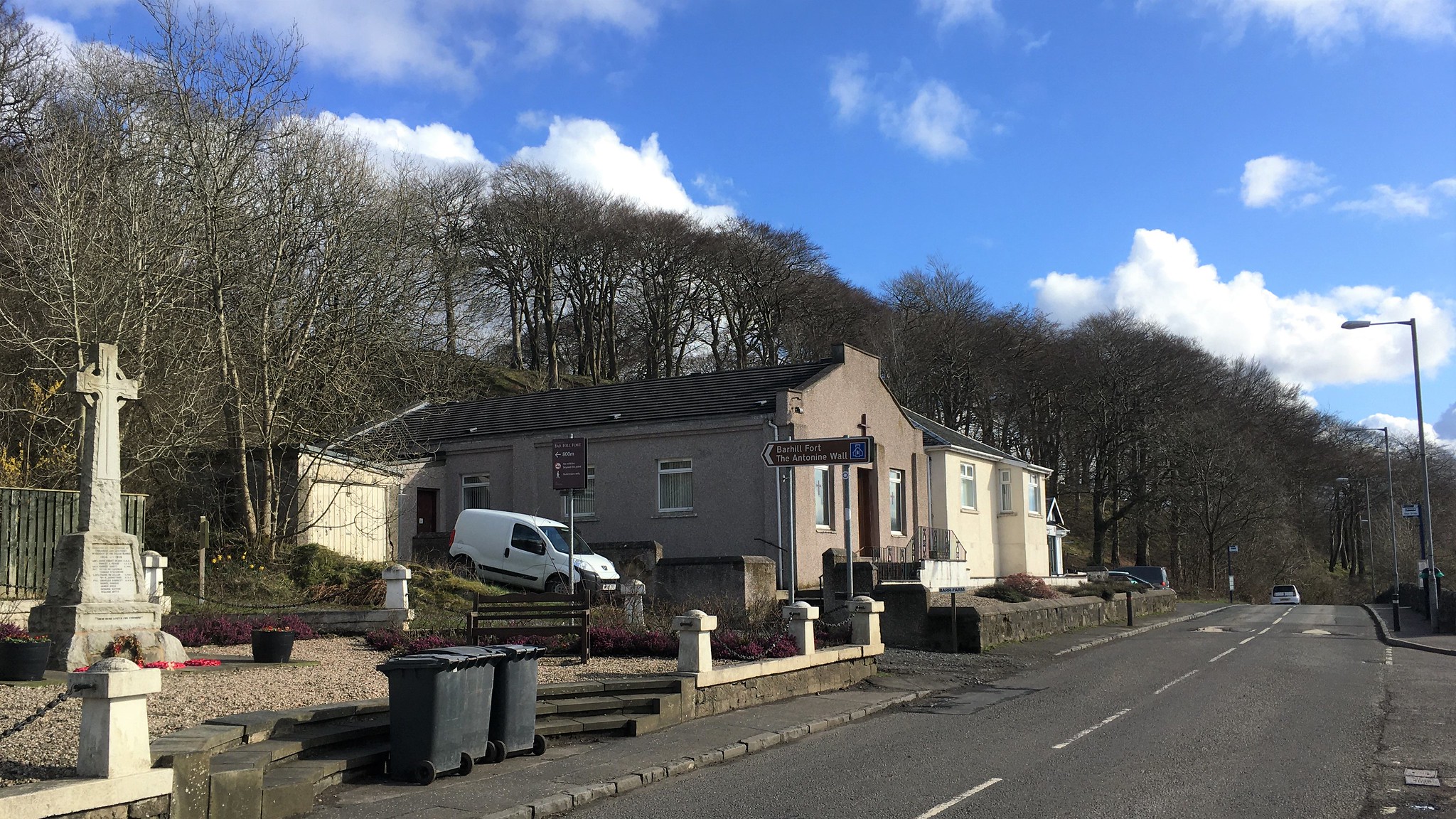 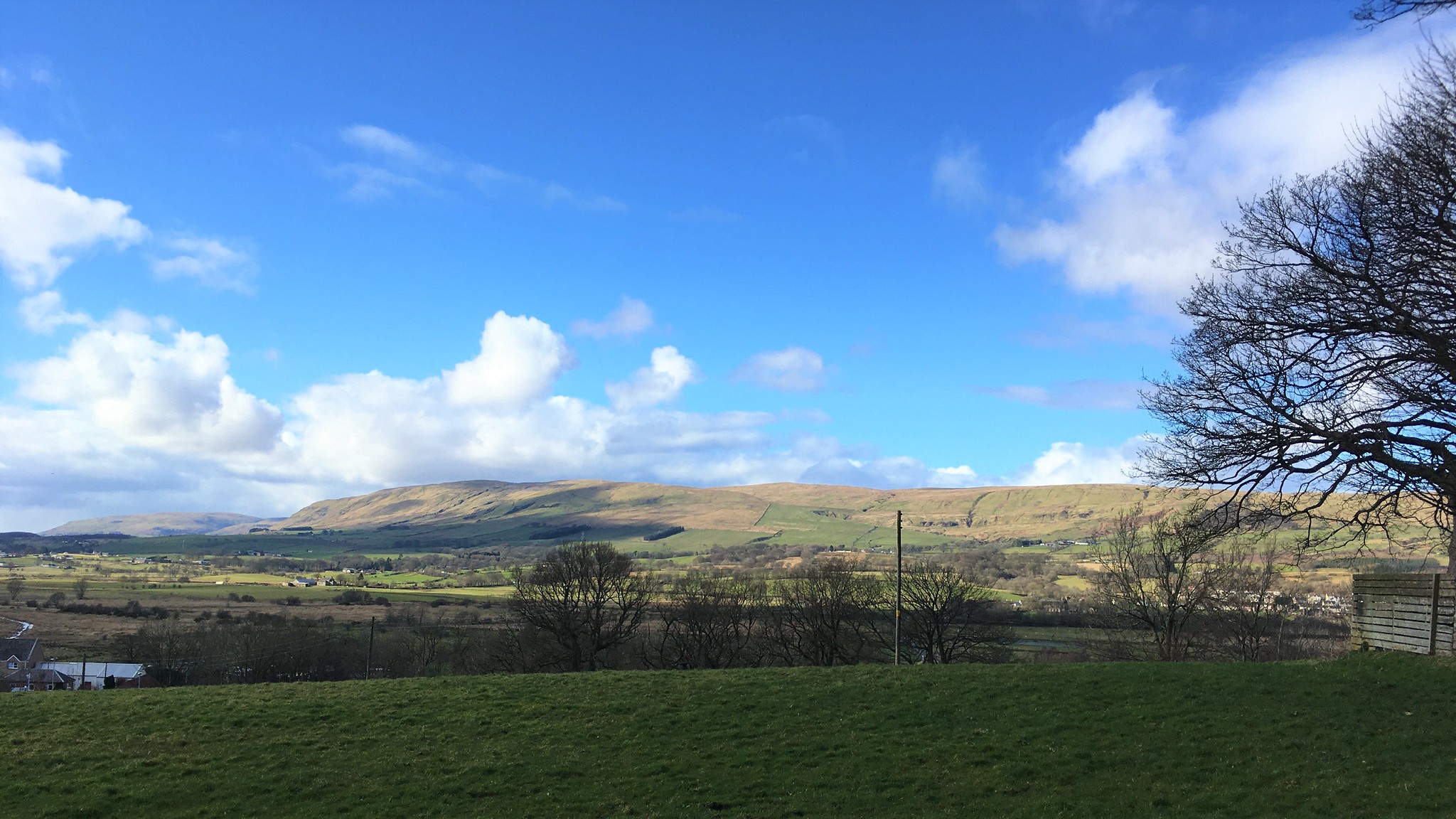 Looking back at the Campsies from Bar Hill Farm 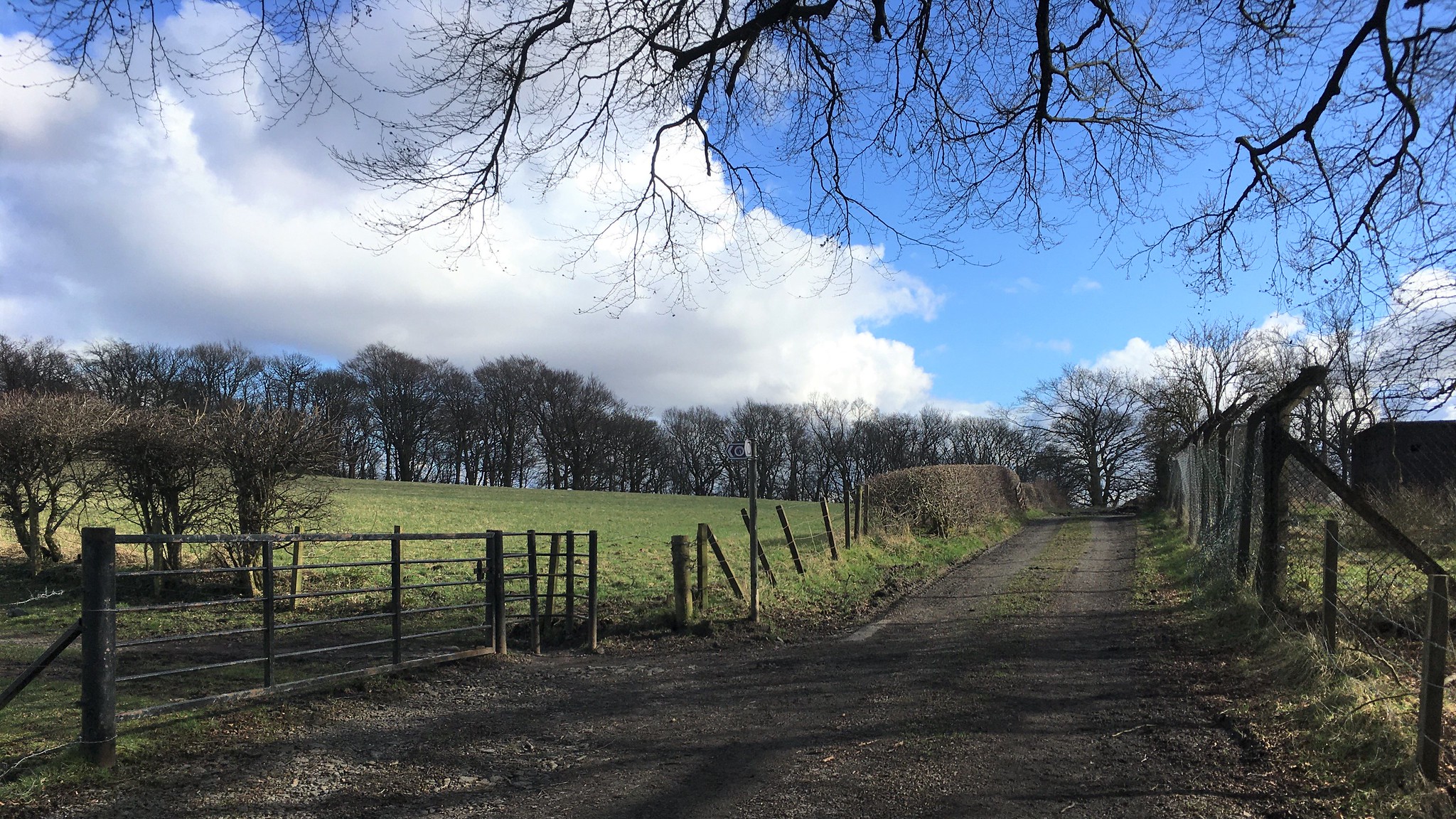 Bar Hill Fort stands at the top of the hill among a copse of oak trees (judging by the dead leaves lying around). It was built to guard this section of the Antonine Wall, and there are plenty of signs dotted around with information, as well as extensive views to the north. 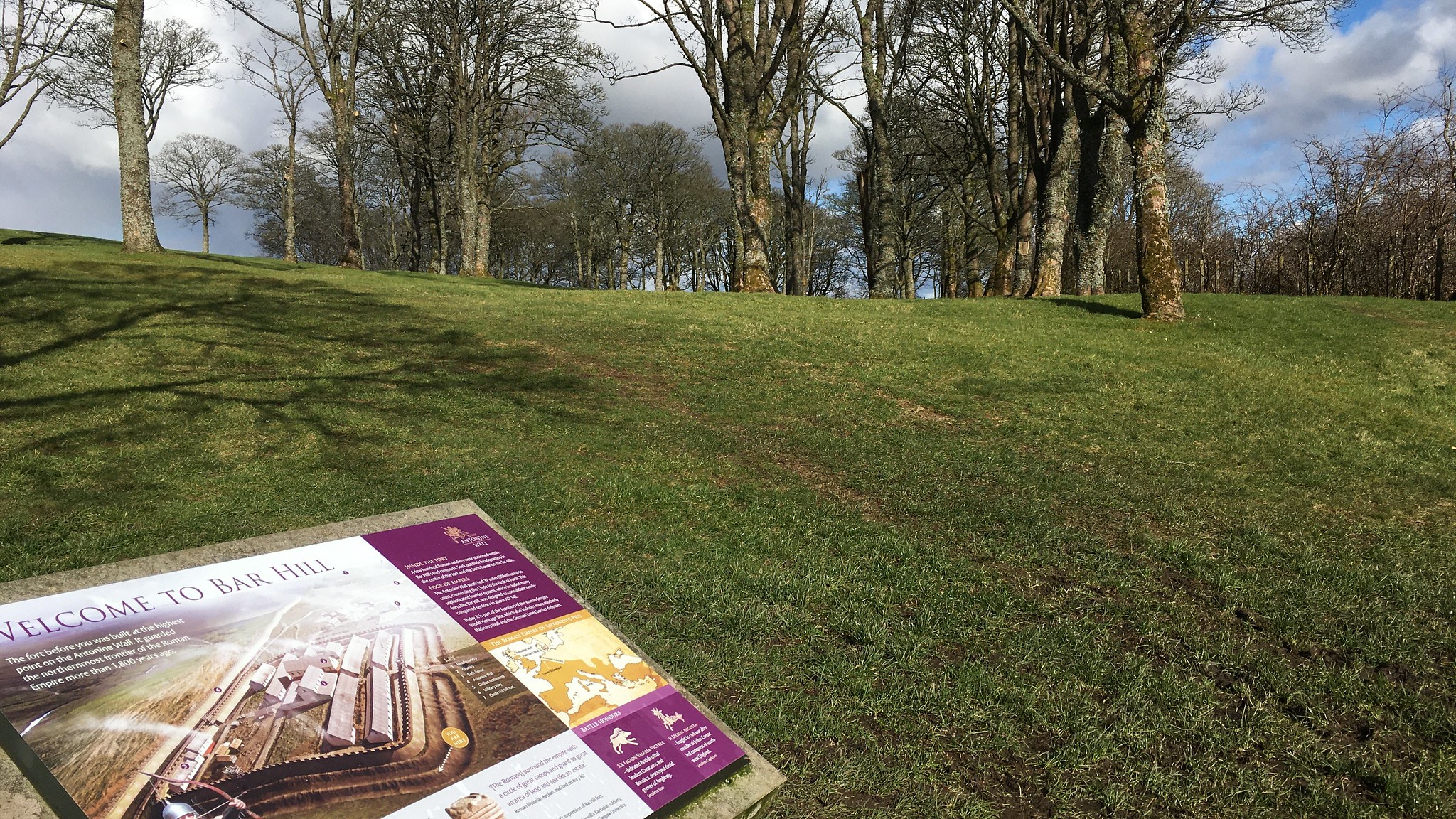 To continue on the John Muir Way, head east towards the edge of the trees. There are two ways down from the fort - straight down the Military Way or uphill to the top of Castle Hill and down the other side. The latter is the waymarked route, and is worth the little extra effort for the views. 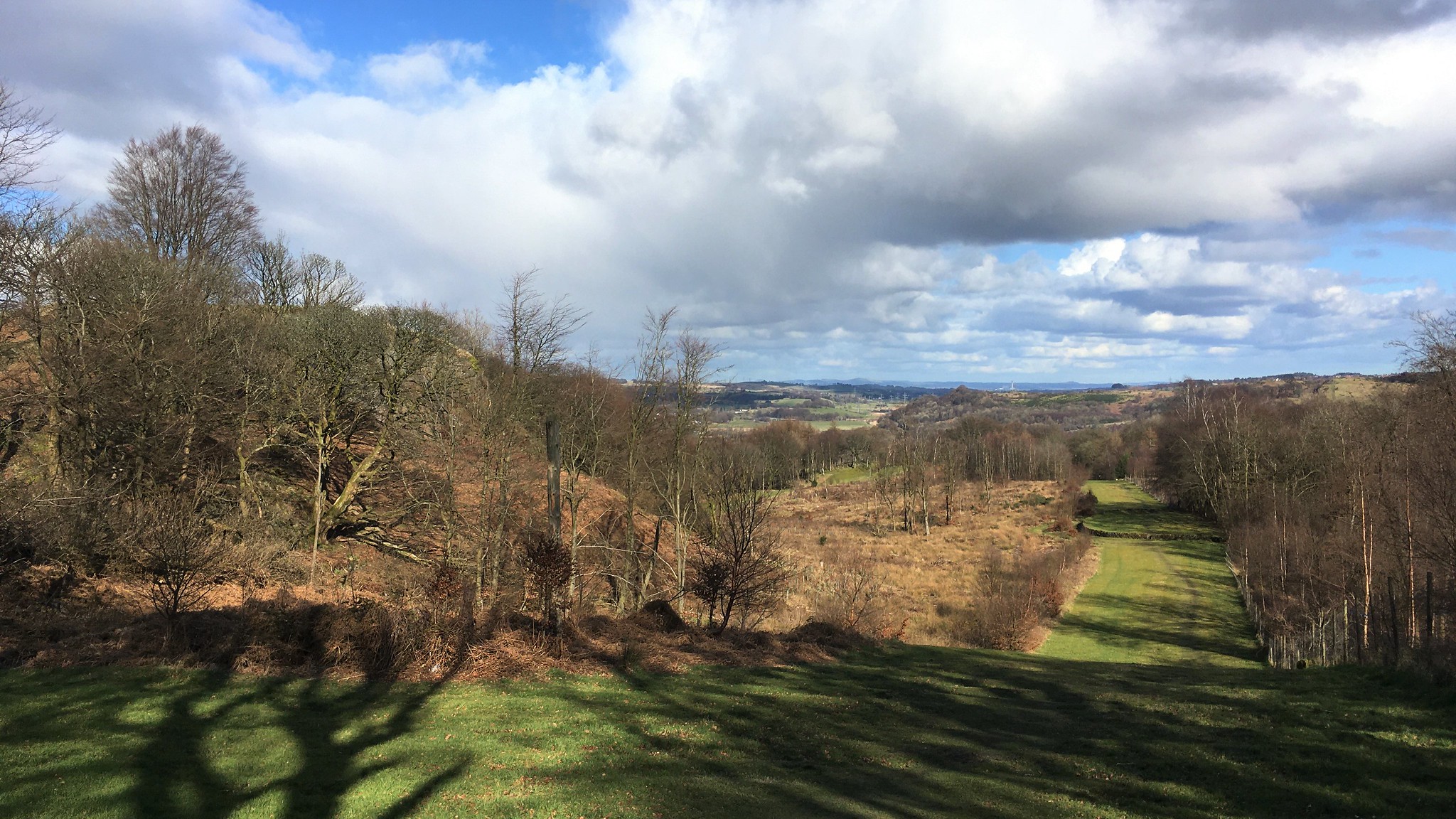 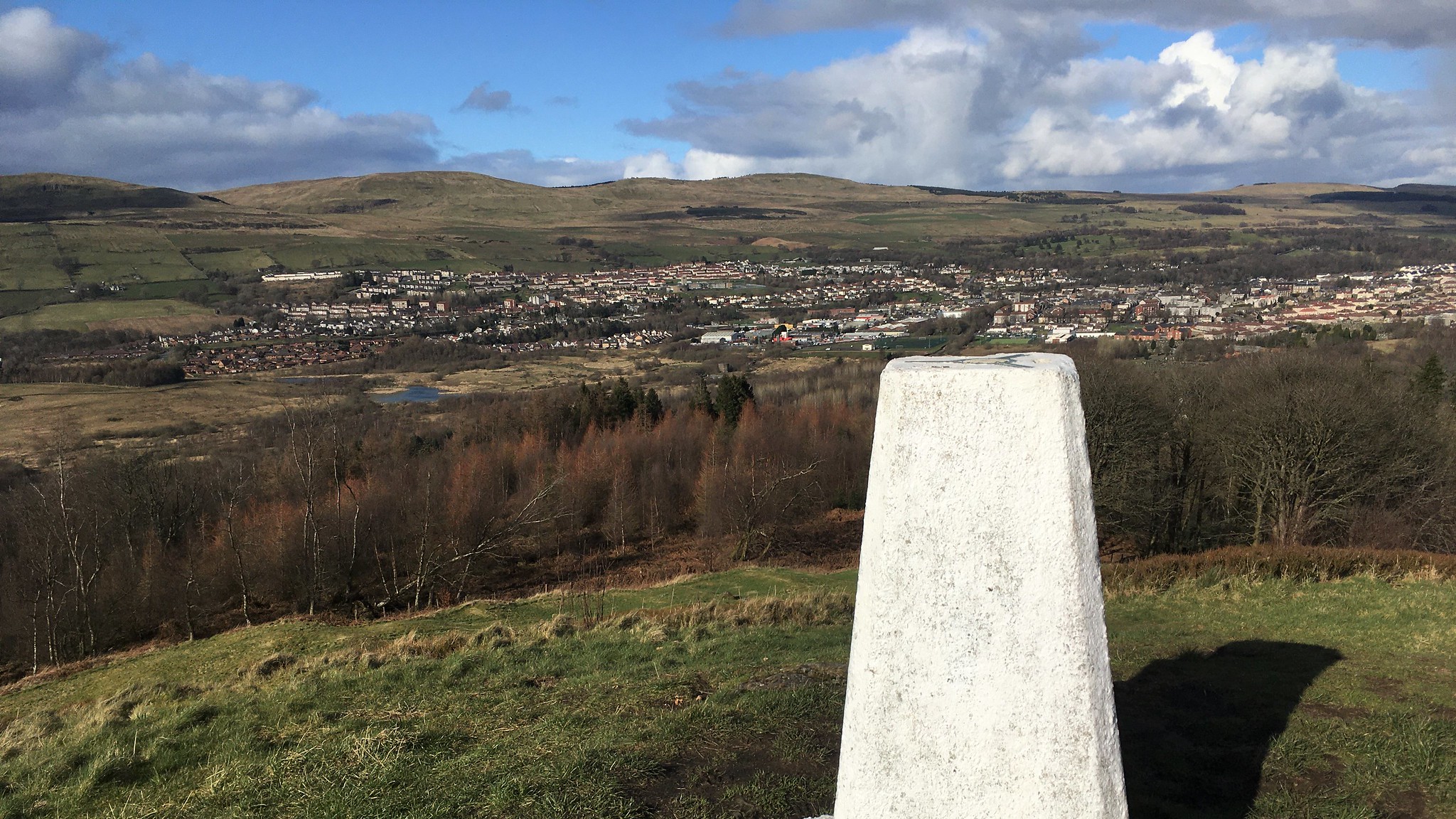 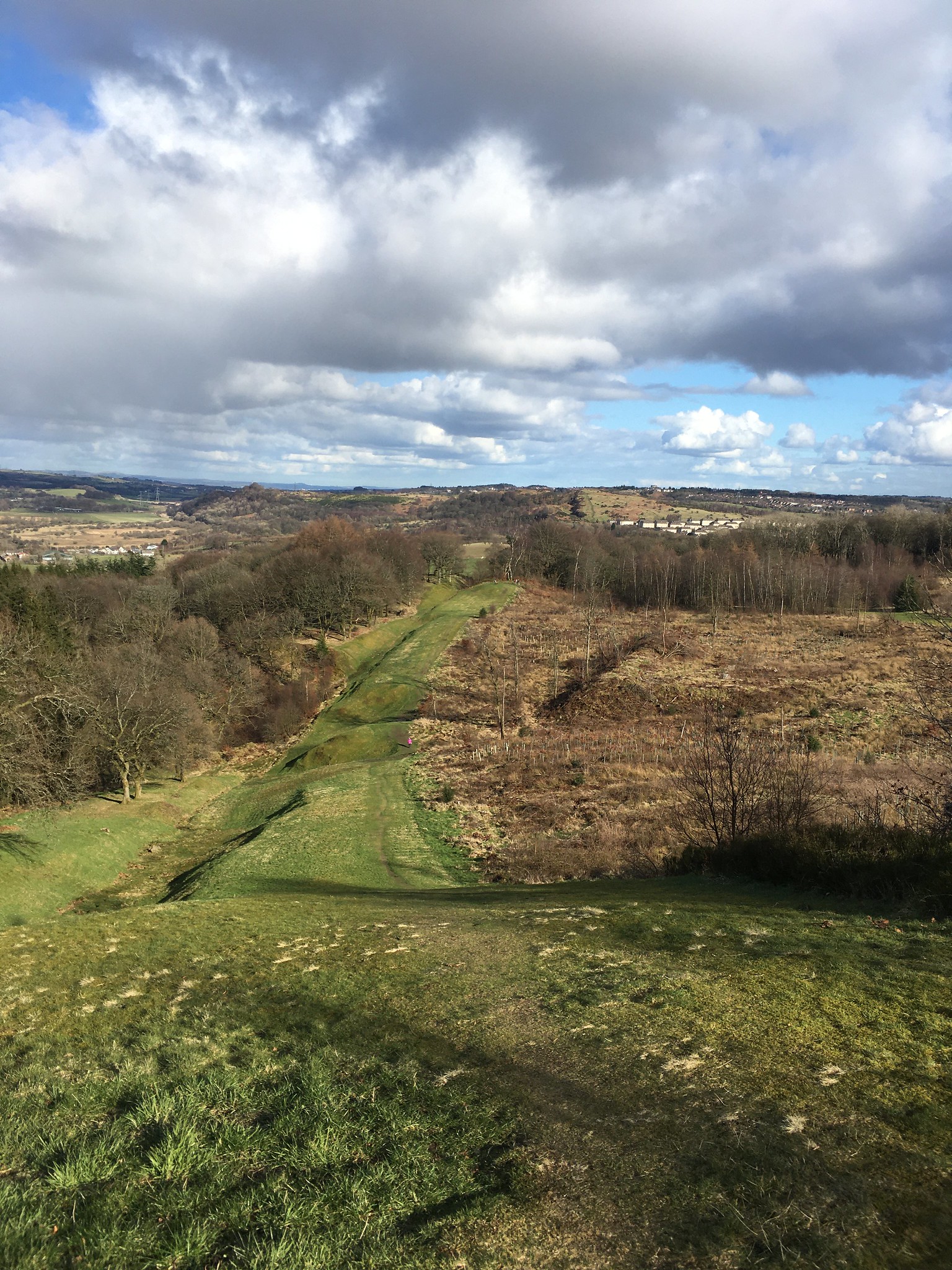 A path descends north from the summit of Castle Hill then sweeps east to follow the line of the Antonine Wall. It's a steep descent and would be tricky if the conditions weren't perfect...although it got a bit boggy near the bottom of the hill. From the foot of Castle Hill, it's just a matter of following the obvious path until you hit the road and the end of this stage of the walk. From here it's about a half hour trudge uphill up and through Croy to the railway station and one of the many trains heading back to Glasgow.

This is the easiest of the three JMT stages I've done so far. I enjoyed the walk - the weather helped obviously - and there were a few wildlife highlights for me to enjoy (the frogs, the dippers, plenty of buzzards soaring overhead...).

Next stage is Croy to Falkirk...mostly along the canal by the look of it. Hoping to fit it in next week some time.
Click to mark this as a great report. Register or Login free to be able to rate and comment on reports (as well as access 1:25000 mapping).

Lochnagar 3 with return via Dubh Loch