Stuchd an Lochain with Tracey


An Socach - Last of the year?

Route: An Socach from Glen Clunie


An Socach Braemar.gpx Open full screen  NB: Walkhighlands is not responsible for the accuracy of gpx files in users posts

Being off work but with nowhere to go I thought I'd get a Munro trip in before winter/lockdown brings trips to the high hills to an end for the year and decided on An Socach as a straightforward looking trip. The forecast for Tuesday looked good so I forced myself up and out in time to pull up at the start of the walk for about 10am. There are "No Parking" signs up at the area around the gate leading into the estate, but there's room for about 6 cars just across the road (full) and another space for a couple of cars a few hundred yards up the road towards the ski centre (also full), so I ended up in a larger parking area another couple of hundred yards up the road (empty) - in total about 5 mins walk from the start of the walk. 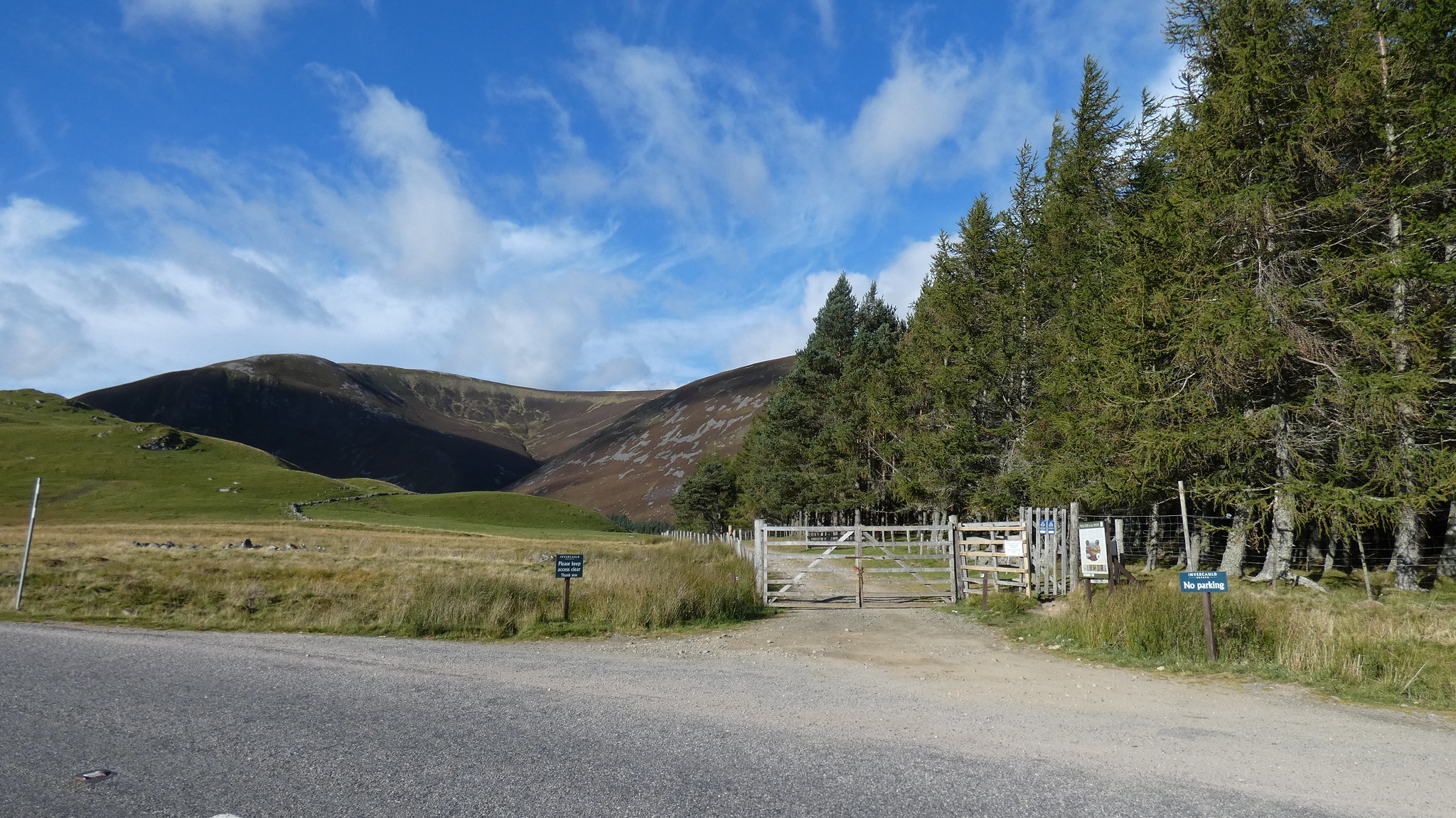 Entrance to Invercauld Estate and start of the walk 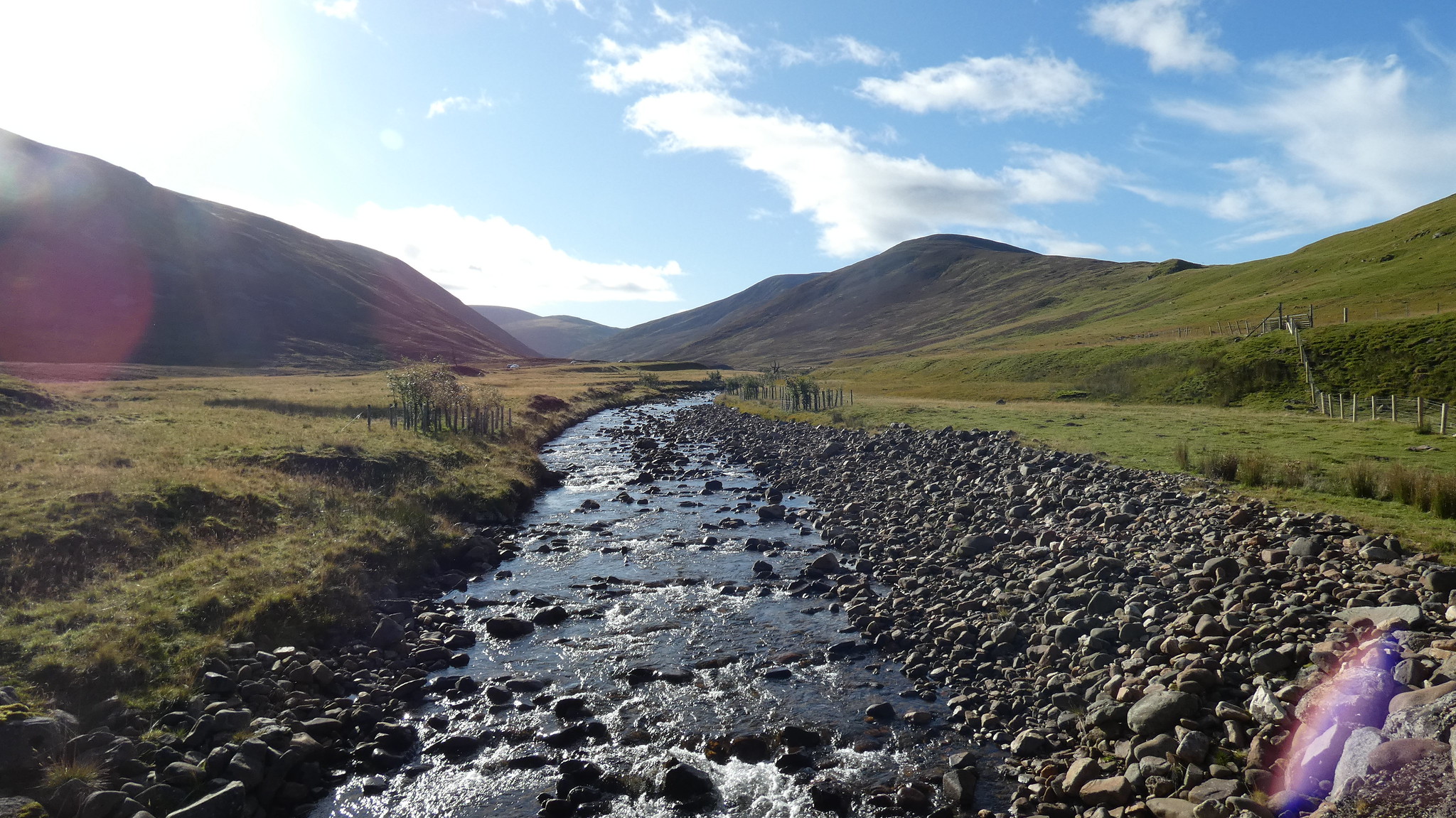 A track takes you across the Clunie Water and then forks - take a left to follow the Baddoch Burn for a couple of kms, passing a neat-looking house on the way. At first I thought the hill behind the house - Sgor Mor - was where I was heading as there was a clear path up it, but apparently this hill is a "nothing", which surprised me. 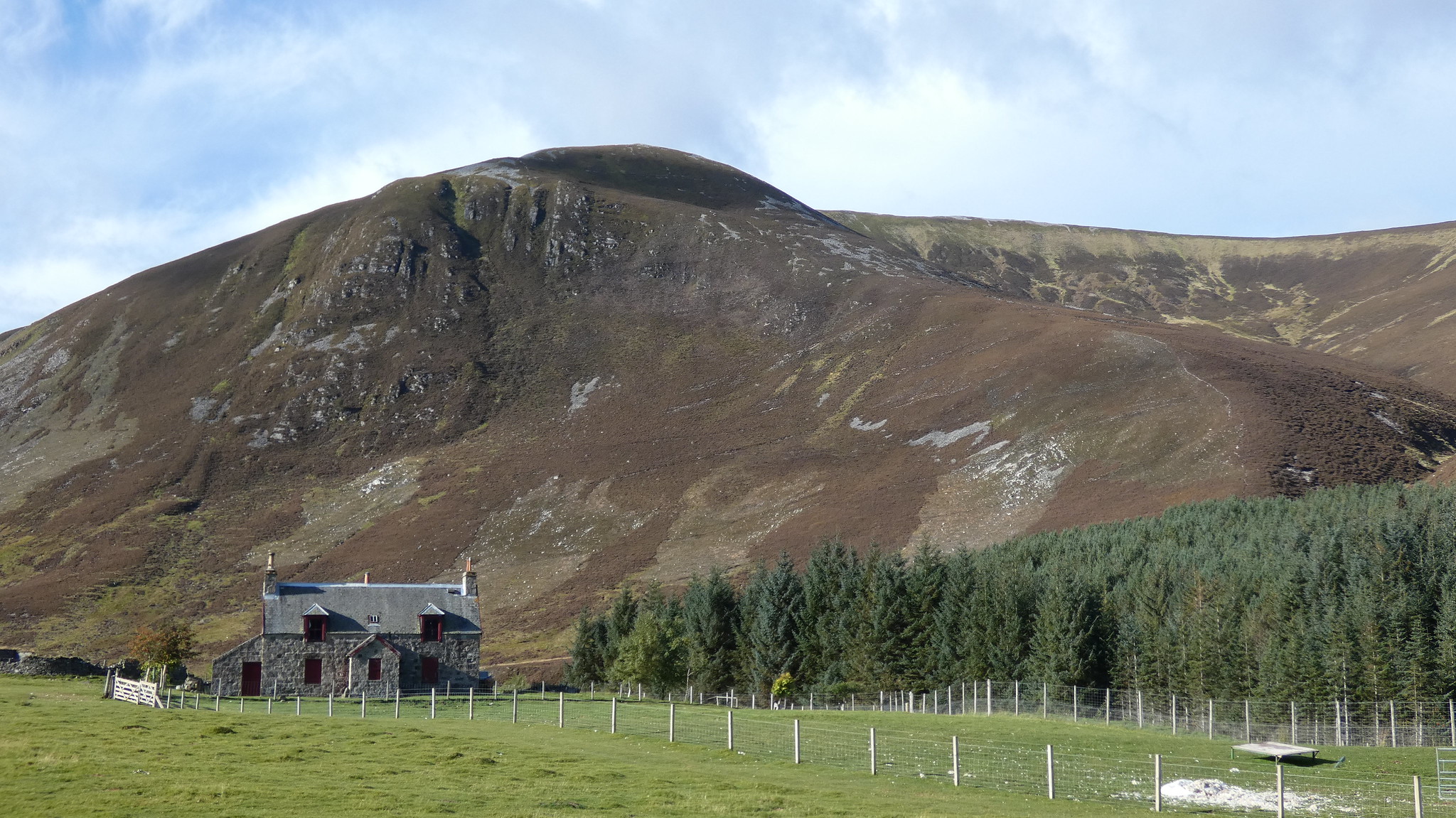 Just beyond the house I became aware of a bit of commotion above me - a raptor being mobbed by a couple of corvids. I managed to get a picture and convinced myself that it was an eagle, but it was probably just a buzzard. Looked bloody big next to the crows or whatever though. 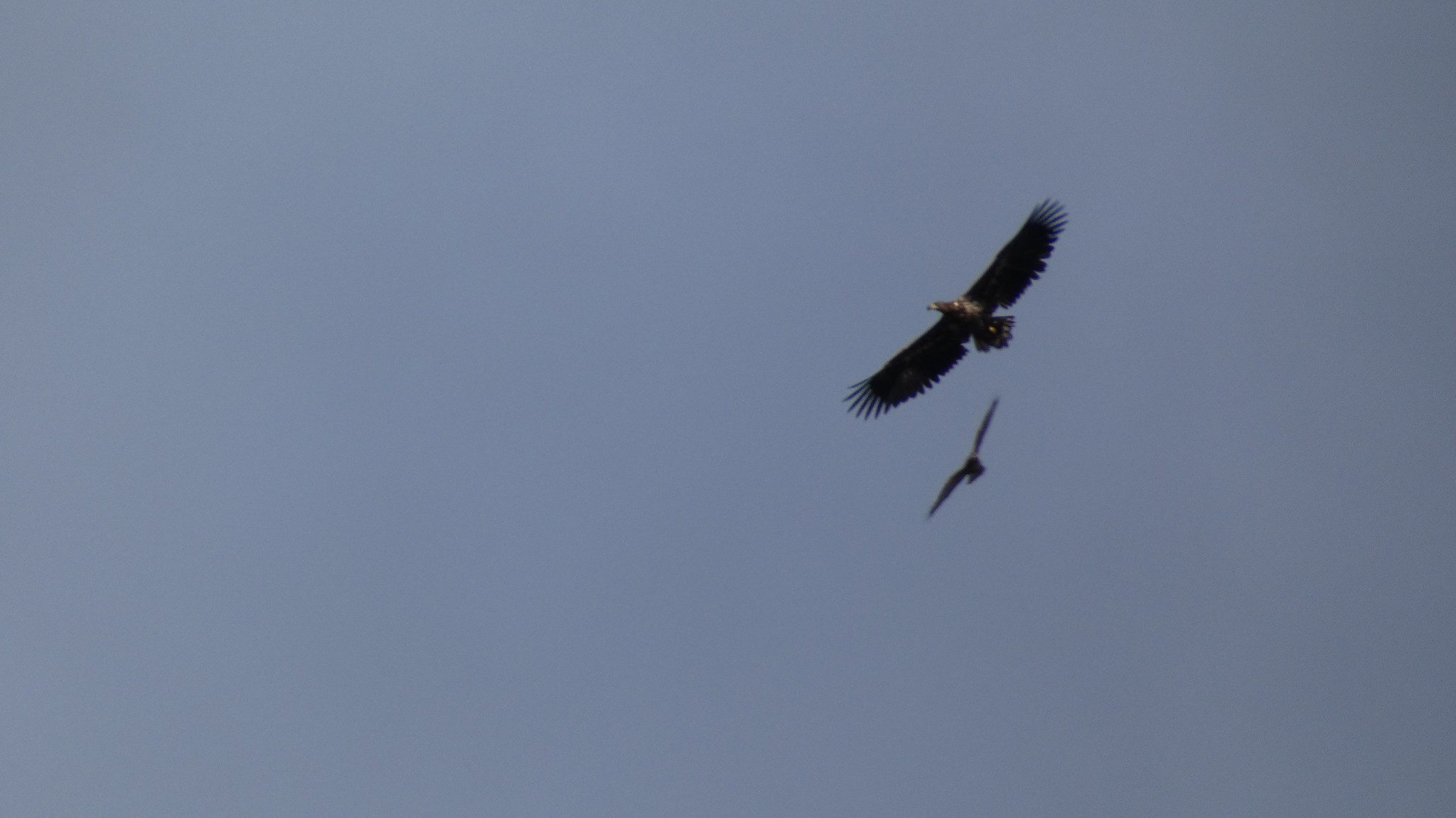 Buzzard (or eagle maybe??) being mobbed by a crow

Eventually the track arrives at a stream crossing - just after this the path onto the hill starts. It follows the stream for a short while then heads off to the left through the heather and climbs steeply - the first bit of exertion of the day. 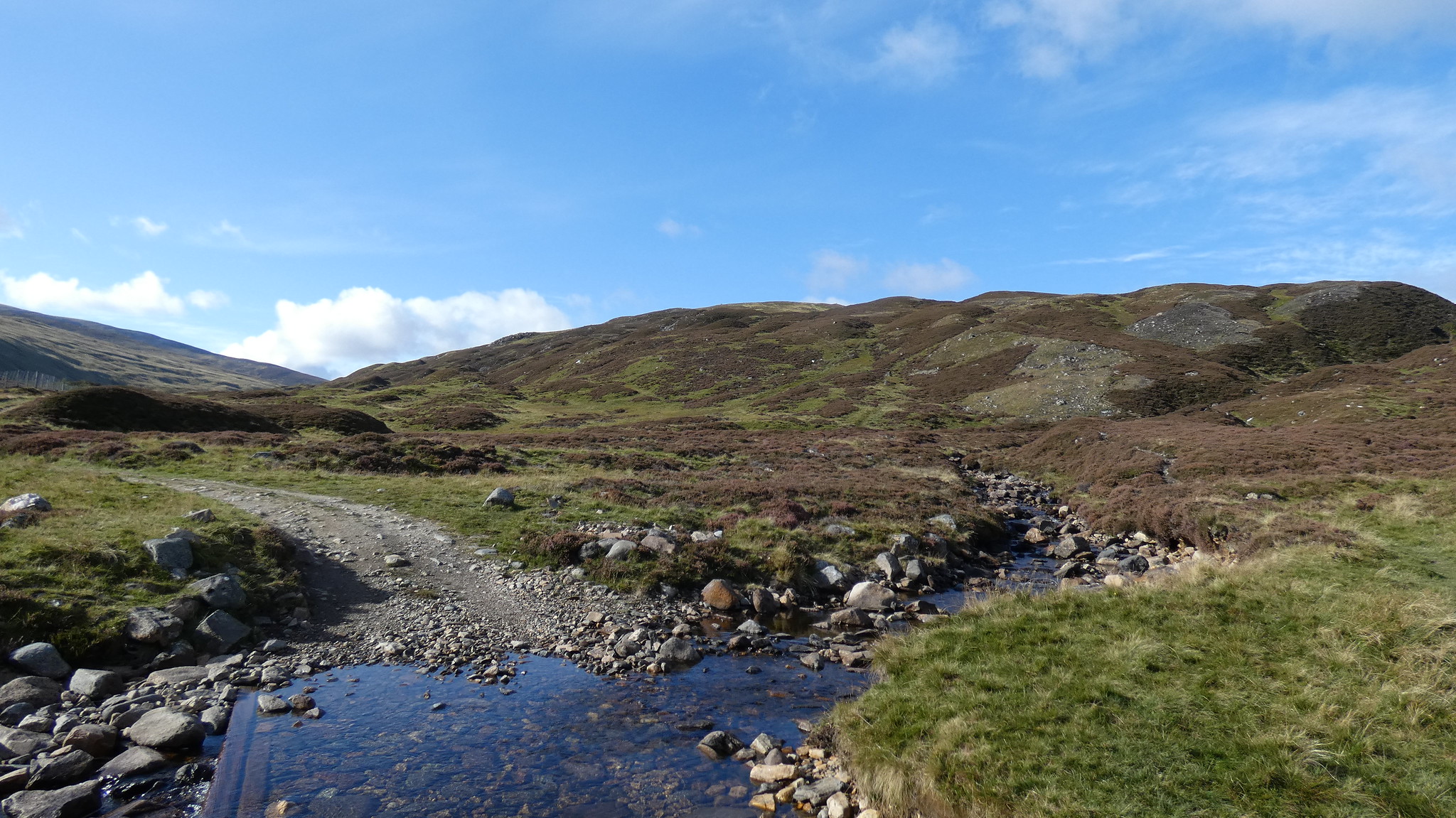 Start of the path up onto An Socach

After the initial steep section the slope eases off and becomes a bit peaty and boggy - but it looks worse than it is. Most of the boggy parts will support you and those that look more dodgy can be easily circumvented without any trouble. Once on this flatter section the first glimpse of An Socach appears. 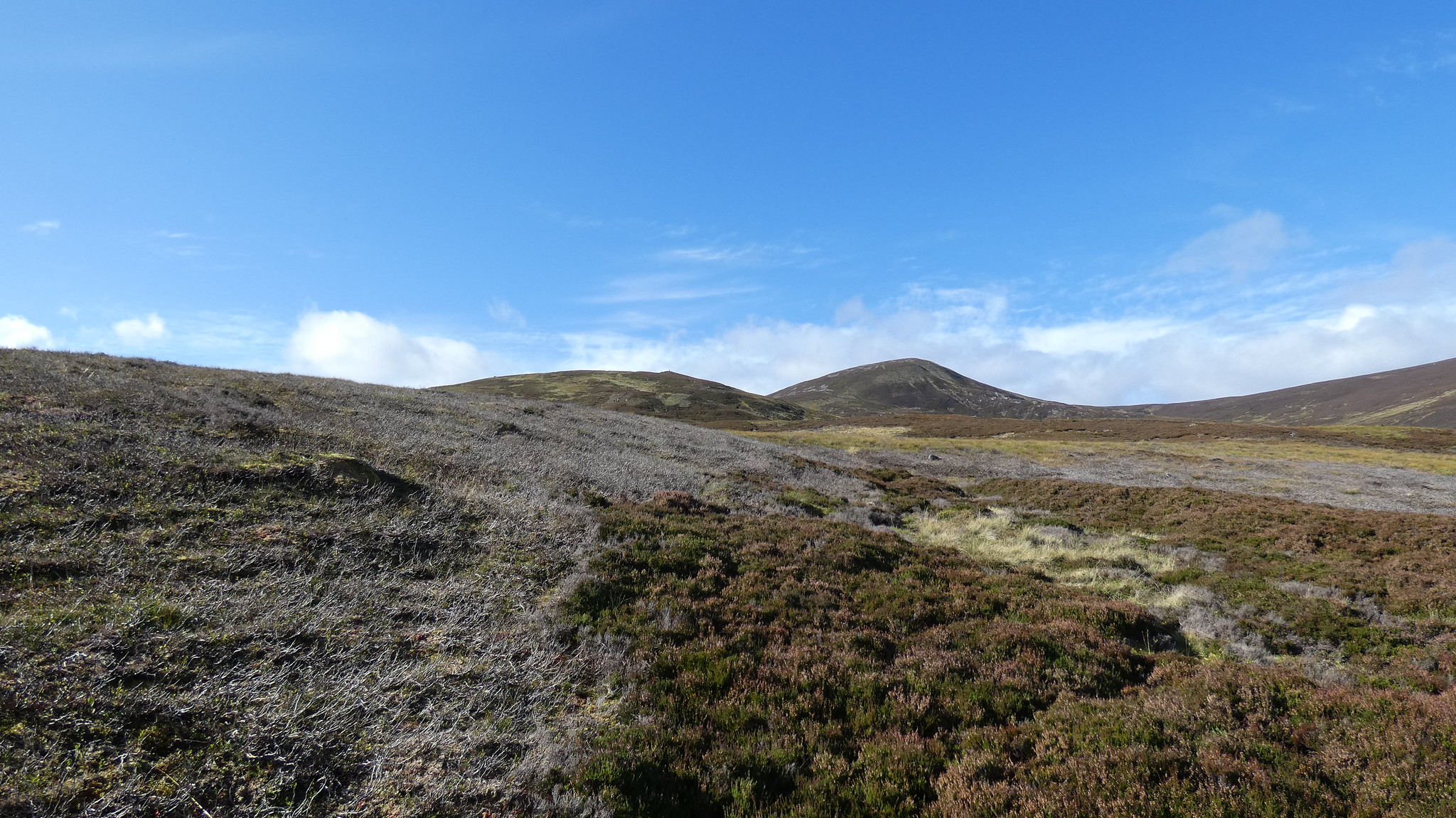 First sight of An Socach

The next steep section arrives shortly, with the climb up onto Socach Mor, which has a substantial cairn on top of it - a good place to stop for a breather and a snack. 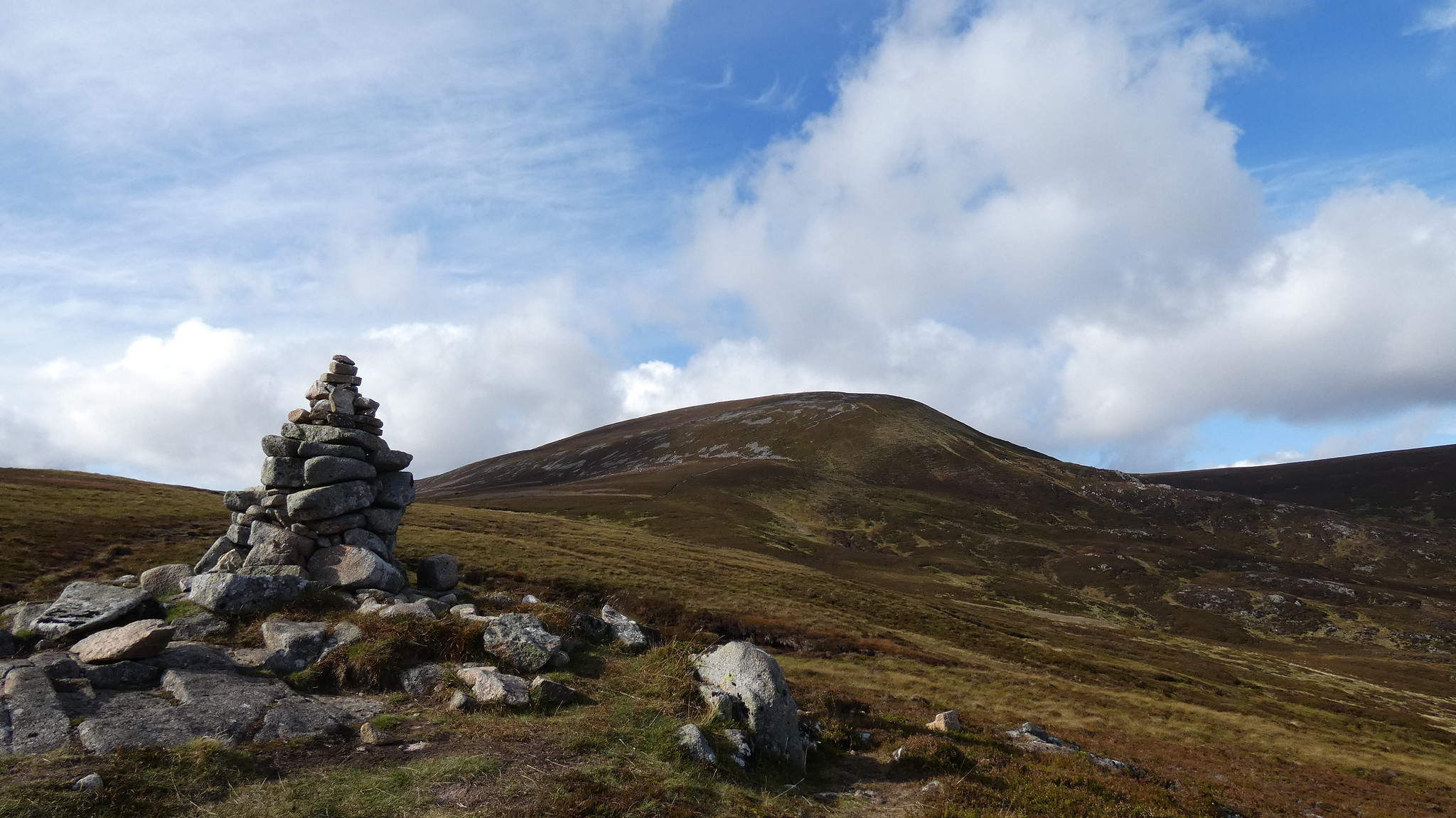 From here you can see the final - and toughest - section of climbing ahead, up onto the summit plateau of An Socach. There are several paths up this section - just pick the one you fancy and get the head down. It's quite steep, but it doesn't last very long and soon you are up on the plateau and the worst of the climbing is now behind you.

Now it's just a matter of navigating the rubble-strewn plateau, with some minor ups and downs, until you arrive at your destination. I was distracted by lots of Wheatears bobbing around wagging their tails at me. There's also nice views to the south across to Loch Vrotachan and the Cairnwell hills, but it was pretty windy by now so I just got my head down and concentrated on picking a path through the stones. 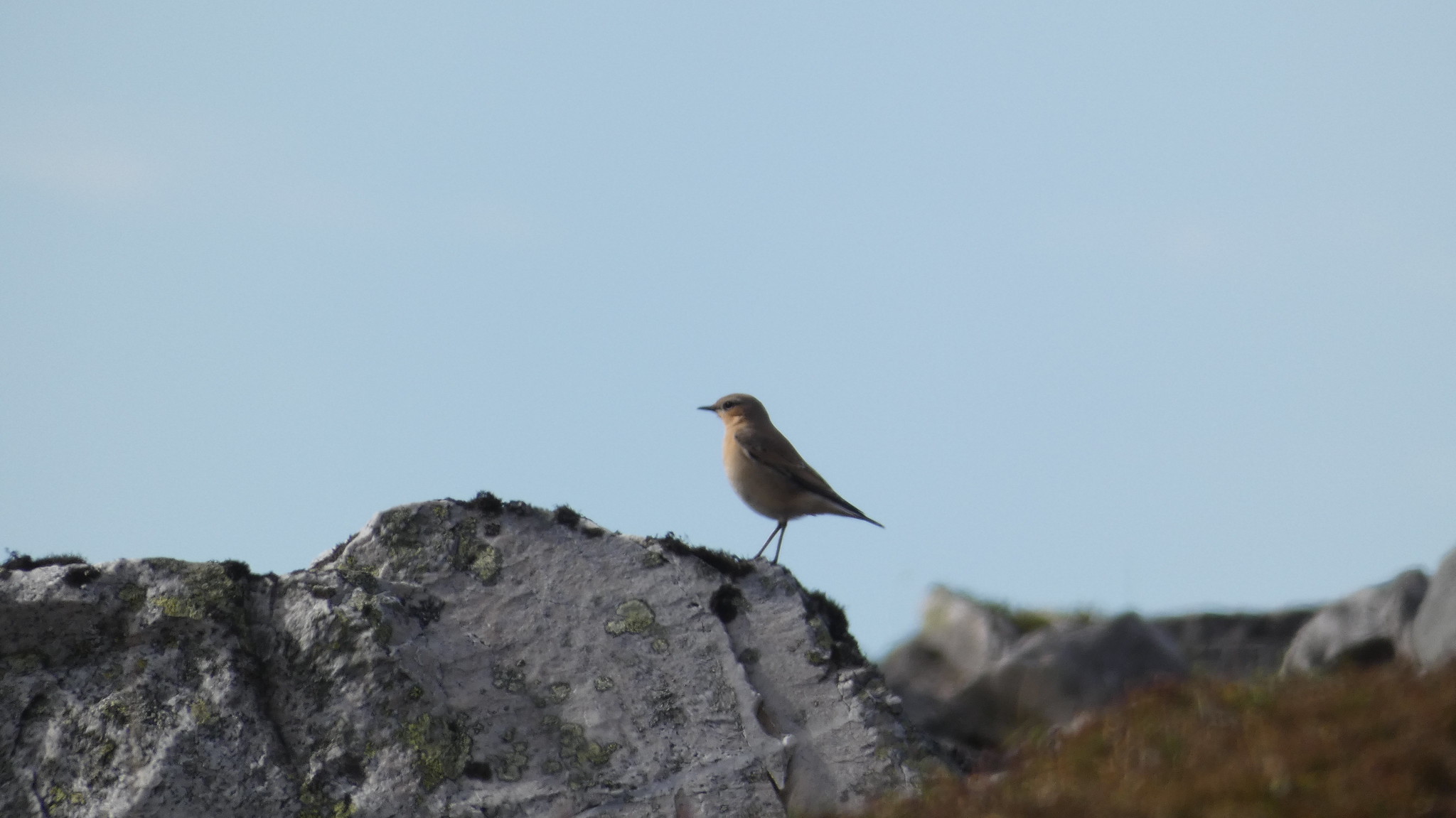 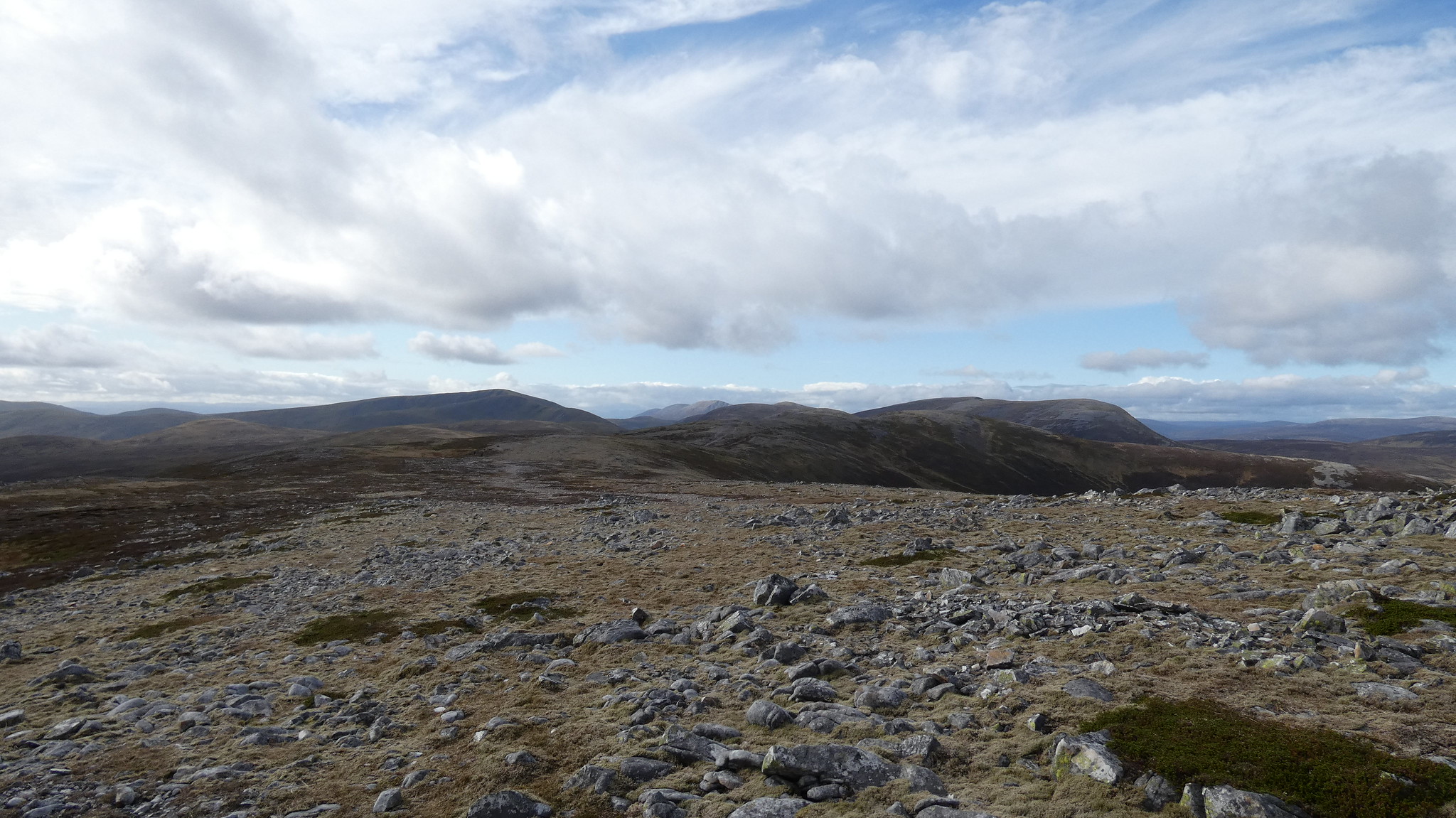 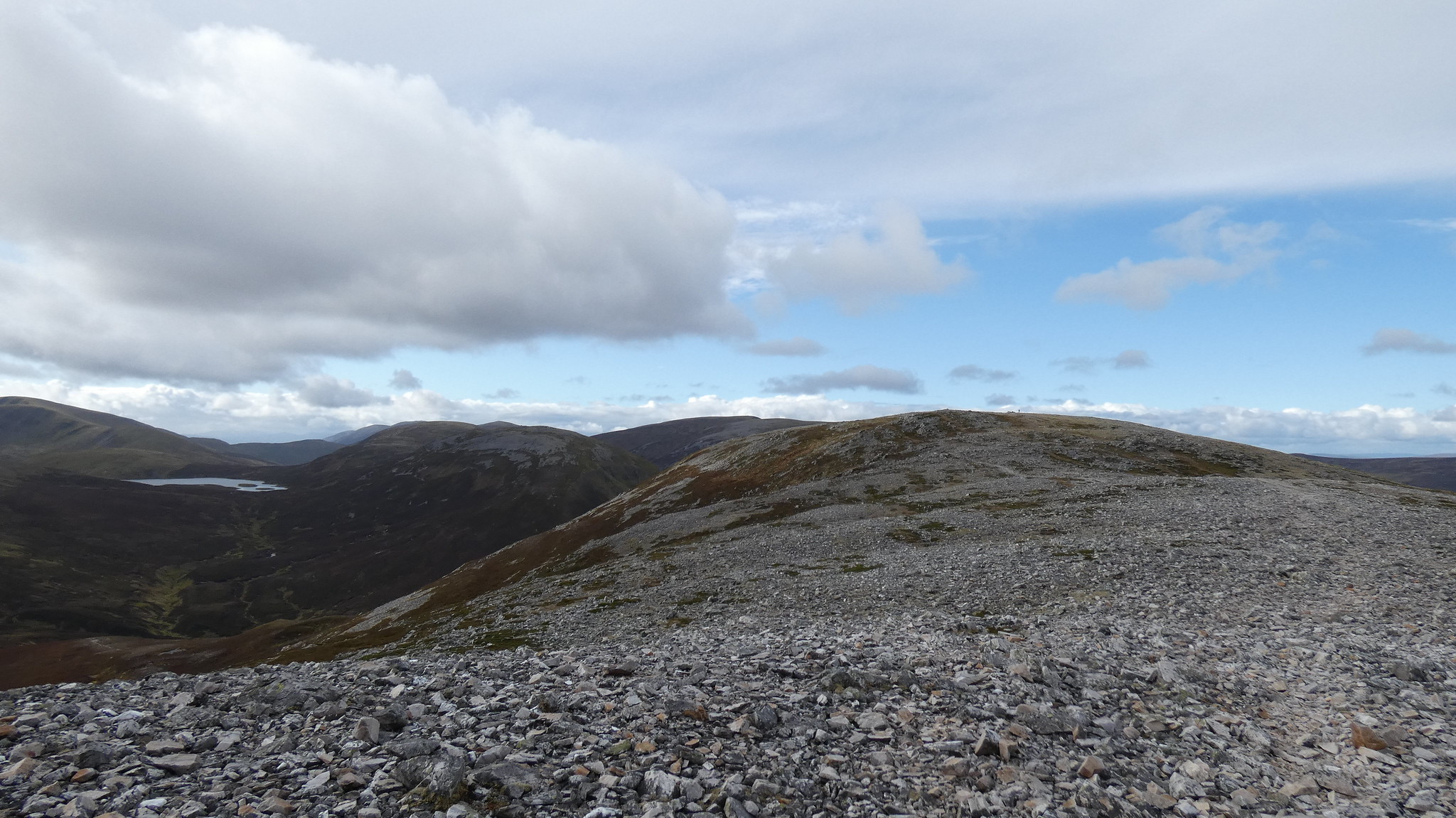 Final approach to An Socach summit

There's a substantial cairn/shelter at the summit, but I didn't hang around as it was very windy and quite chilly by now, having been calm and warm almost all the way up, and the view from the summit isn't great - good but not great. So I took a few snaps and headed back the way I had come. I don't think there's really an alternative to a straightforward "out and back" route for this hill. 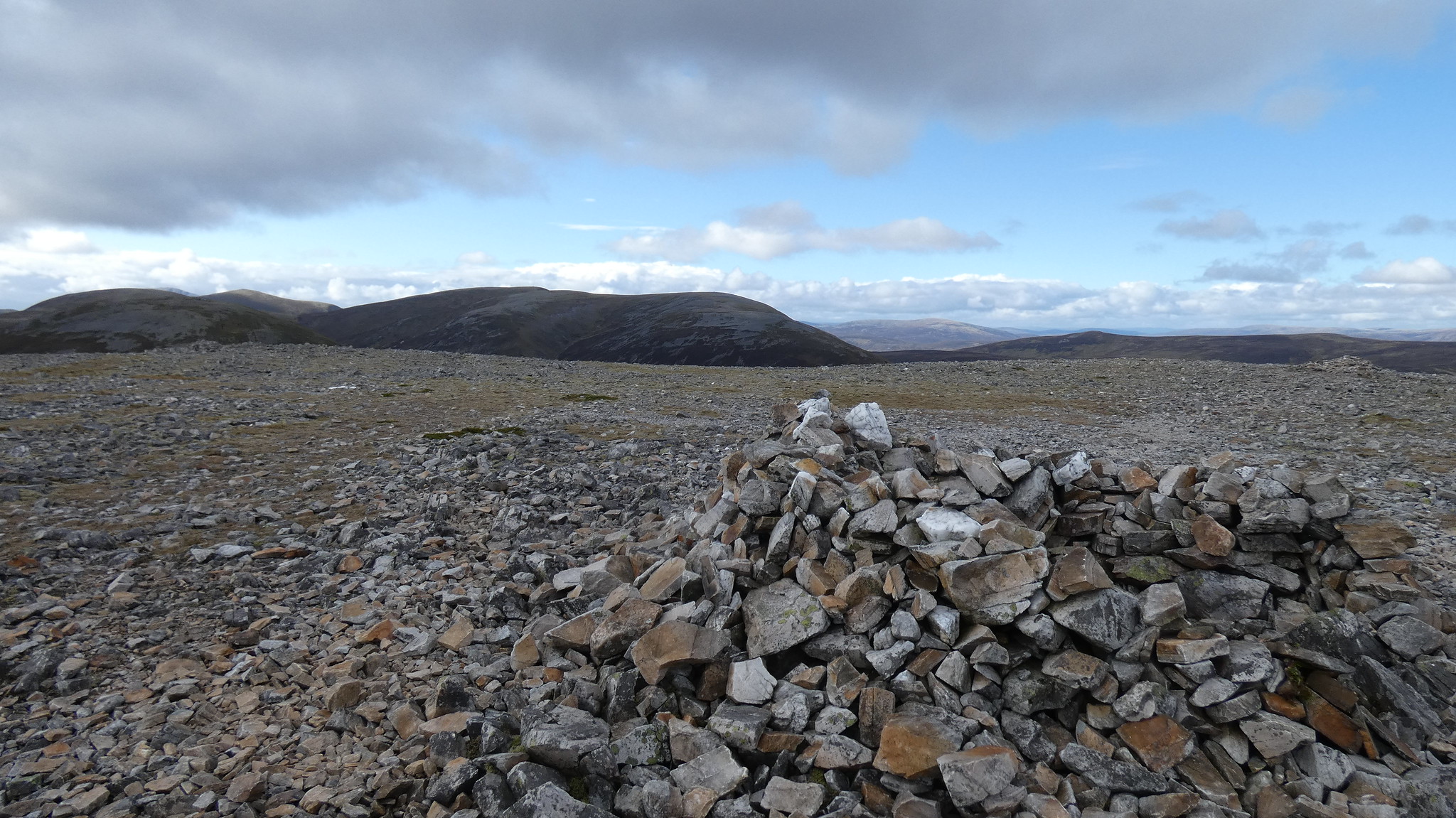 So just over five hours - a nice quick "bag" and a pleasant walk in a quite picturesque glen with a few wildlife encounters. Glad I talked myself into it and I hope it doesn't turn out to be my final Munro outing of the year - we'll just have to see how it goes I suppose.
Click to mark this as a great report. Register or Login free to be able to rate and comment on reports (as well as access 1:25000 mapping).